Between the Boulevard and the Bay: Our Colourful Language 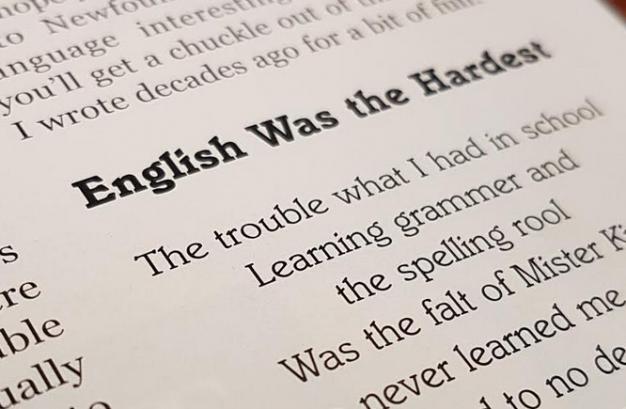 The language of Newfoundland and Labrador is very colourful. We regularly use alliteration, onomatopoeias, metaphors, similes, puns and hyperboles - not that most of us realize it. Many of us have never heard of these communication devices and couldn’t define them if asked, but we use them in sentences every day. Especially hyperboles. Newfoundlanders and Labradorians love to hyperbolize.

A hyperbole is a gross exaggeration, not meant to be taken literally. Sounds familiar now, doesn’t it? Instead of saying “The road is very winding,” we might say, “The road was so winding that there was times when I seen me own tail lights!” We don’t just speak words, we paint pictures.

One time when my friend, Cyril Cooper, and I were youngsters playing on the beach in Twillingate, his father Frank yelled out a hyperbolic warning. “Cyril, if you don’t come up from the beach this minute, I’m going to crack the skin on thy skull and haul thy carcass up through!” Effective, no doubt.

Frank was prolific in the use of hyperbole. He once threatened his son, Herb: “I’ll hit you so hard over your head that you’ll have to turn down your socks to see out over!”

My grandfather, Jonas Cooper, was also a master of hyperbole. Being a big believer in the power of Mecca Ointment, he one-time proclaimed: “That Mecca Ointment is able to heal over a cat’s ass overnight!”

One fellow, in describing how far a distance his gun could shoot, said that he once fired a shot into the air and long after he had put the gun away and gone on to something else, he heard a thump on his roof. When he went up on the roof, he found an angel with a broken wing.

What about other communication devices? See if any of these sound familiar:

“How would you like your heart clapboarded with your ribs?” (A metaphor to better express “If you don’t stop that I’m going to strike you.”)

“You’re as busy as a bayman with two wood stoves.” (A simile, comparing you to something to express that you’re so busy you can’t keep up with it all.)

Something rather unique to Newfoundland and Labrador figures of speech is the way we describe things in opposite terms. If something is really good, we say, “That’s bad, me son!” Or if it’s chilly outside: “Nar bit cold out, d’day.” Or, when we’re expecting a fine time out: “I knows it’s not gonna be a wicked time here d’night.” (That one is almost a double opposite, because “wicked” actually means excellent, and this seems to say it’s not going to be an excellent - and not wicked - time.) We don’t even notice we’re doing it, but it must be some challenging for come-from-aways to follow our conversations.

Two other communication devices that add a fair amount of colour to Newfoundland and Labrador conversations are cuss words and rhymes. We use these devices to make a point and, especially with cuss words, really drive it home. More often, though, alliteration is used to emphasize oaths. “By the lard, liftin’, lamp lightin’, reevin’, roarin’, mortified Moses!”

Rhymes are sometimes created to remember something, as in folklore forecasting: “Mackerel skies and mare’s tails; make the sailor furl his sails.” Or “Bright Northern Lights above the hill; a fine day, then a storm foretell.”

As you’ve probably noticed in Downhome, there are a lot of poets in our readership. Rhyming is a creative way to describe an emotion, an event or a scene. In this issue alone, we have a poem written by a past poet laureate in the 1920s, and one written much more recently by a Grade 9 student.

I hope you’ve found this brief foray into Newfoundland and Labrador language interesting. And maybe you’ll get a chuckleout of this rhyme I wrote decades ago for a bit of fun:

English Was the Hardest

The trouble what I had in school

Learning grammer and the spelling rool

Was the falt of Mister King

Who never learned me anything

And to no degree

The falt of she

Who sat studiously across from me

And unknowingly let me see

A lot of leg above the knee.