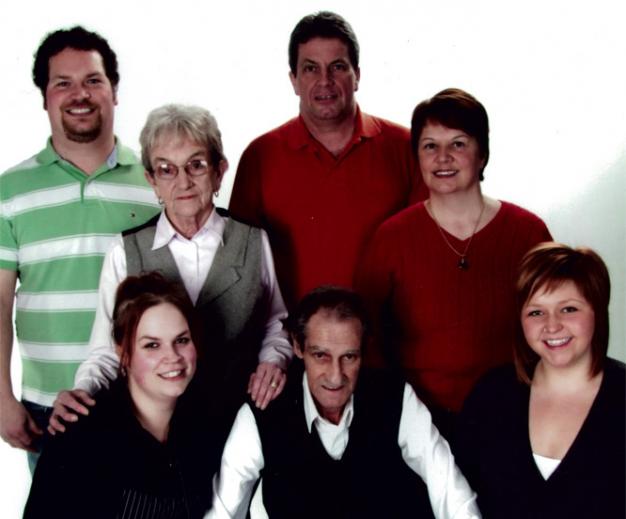 My grandfather, Tony Silver - better known as Tony the Tailor, had been interviewed for almost every local publication before his 2010 death, including a CBC “Land and Sea” episode in 2006. My nan was never shy of the attention, yet she was always telling my grandfather’s story and never her own.

My grandmother’s life is more than a story- it’s a series of new beginnings and fresh starts, trials and tribulations, and more good times than bad. It is one woman’s account of making the best with what you are given and making a life worth living. She recently sat down to talk to me about it.

Mercedes Lake was the eldest girl and the second child born to Jack and Elizabeth Lake. She was born on October 31, 1932. Her name is pronounced Mer-SEED-ease or Mer-SEED-is, not the same way one would pronounce the brand of car. They lived in St. Joseph’s, a remote rural community close to Placentia that was only accessible by boat from Rushoon. It was eventually resettled in the late 1960s, and the residents floated their houses across the harbour to their new home.

Nan’s father was a fisherman who was gone pretty well all summer long, just coming home long enough to dump his catch and go on again. His schooner was called the Mercedes J, which he named after Nan and himself. Her family owned sheep, a vegetable garden and a pony named Molly. Being the oldest girl, she had many responsibilities, including shearing the sheep, spinning the wool, and knitting socks and sweaters for her father and brother for going out on the boat. She also helped with the hay and tending the gardens, watched the younger kids, and when her father returned home with the fish she helped prepare the catch.

When there was a death in the community, my great-grandmother, Elizabeth, would make up the bodies for the funeral service. Back then in the 1940s, there was no embalming procedure, so they still practised the true wake. Someone would watch the body 24 hours a day - just in case theyactually did wake up. Nan and her sisters were often recruited to watch the body overnight in their parlour. 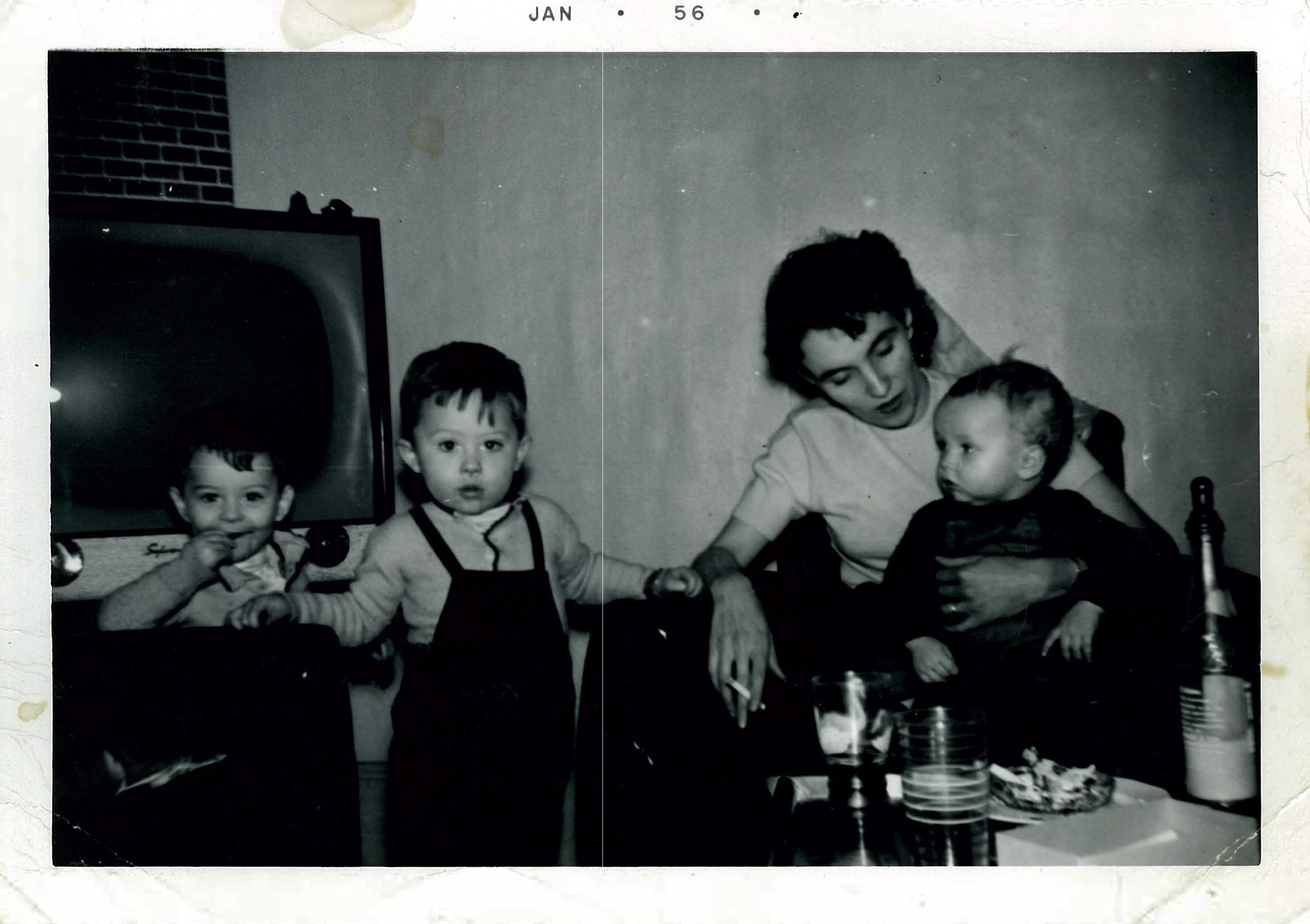 Mercedes and Tony Jr. (right) and two boys
who lived in the neighbourhood, 1956.

“Poverty,” Nan replied, nonchalantly. “There was nothing there for me. I wanted to find something of my own.

“Confederation was this big shagging deal - sure, Dad thought Joey [Smallwood] was God. I didn’t notice the difference first or last because St. Joseph’s was all I ever knew.”

In 1949, at the age of 17, my grandmother packed up and left St. Joseph’s for St. John’s. Confederation was the last thing on her mind when she left home. She wanted to get out and see what the rest of the world - or island at least - had to offer her. She began working at the Fever Hospital on Forest Road, making beds and doing laundry, and making many friends along the way. My dad told me that until they moved out to the Goulds, he’d always thought it was my grandfather who had all kinds of friends from over the years. He quickly realized that Nan was the one who knew everyone, from working at the hospital and going to dances. She was a real social butterfly, introducing my grandfather to everyone he knew.

In 1953, Mercedes met Tony Silver, son of a Portuguese stowaway, at a dance when they were both 21. He obviously saw something special in her because Tony was engaged to another woman when they first met. When I asked her how she started seeing him, she winked at the portrait of my grandfather hanging on the wall. She didn’t elaborate and I didn’t press her on it.

My grandparents married in January 1954. My dad, Tony Jr., was born in February 1955. Ten more children - Donna (Clarke), Bobby (Flynn), Jackie (Higdon), Theresa (Antle), Rose (Mullet), Micki, Shawn, Mike, Pat and Tom - followed over the next 16 years. Tony’s Tailor Shop opened in 1964. Nan worked there until around 1995, taking care of all the time-consuming hand-sewing tasks. My grandparents also owned another business that opened around the same time as the tailor shop -  a restaurant in the Goulds called The Silverdale Drive-in, where Nan ran the entire show.

Home is Where You Hang Your Hooks

My grandmother’s preferred pastimes range from expected and traditional hobbies, like sewing, knitting and baking, to a whole other end of a spectrum: watching stock-car races, going to car shows, watching “Cops” on TV, hunting, fishing and a taking a boat out around the harbour.

She and my grandfather had always had a cabin. Before Pop passed, he and Nan had their hunting cabin in Millertown and their everyday cabin just 30 minutes outside town on Witless Bay Line (which I am proud to call my own nowadays). Their idea of relaxing was hunting moose, caribou, grouse and rabbits, which Nan adored. But her favourite way to spend the day was fishing. Whether she stood at the edge of the pond, flicked her line off the wharf or took the boat out for a run, she absolutely loved fishing. 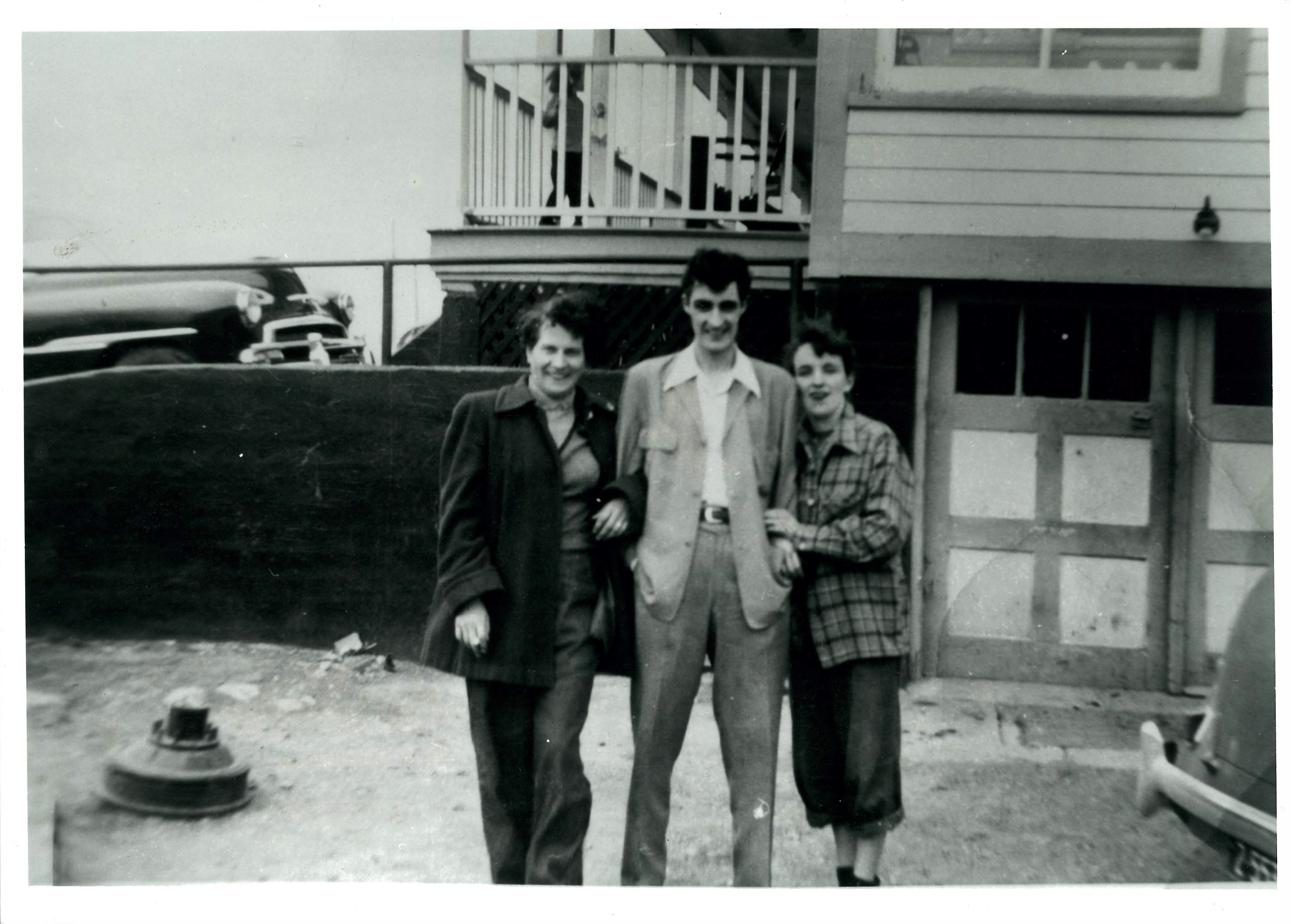 My friend Vicki came to visit my grandmother with me one day, and Nan’s phone rang.

“Hi, Sylvia,” we heard the voice say fromthe other end.

“Your cousin calls your Nan by her first name?” Vicki asked in astonishment.

“No, she calls her ‘Sylvia.’ Her name is Mercedes,” I corrected her.

At three years old, my cousin Alyshia Silver joined our family when her mom married my uncle, Tom. Alyshia used to have a hard time saying “Mrs. Silver,” so instead she started calling Nan “Sylvia.” She really thought it was her name for a long time.

My grandmother has always had a special relationship with all of her 11 children, 22 grandchildren and 13 great-grandchildren. She’s never missed a concert, graduation or birthday. She really knows each of us, and she never forgets to remind us how much she loves us all.

Nine years ago, Nan started a brand new chapter again, as we all said goodbye to her husband, Tony the Tailor. She sold their home of 16 years, and moved into the apartment that my parents, Tony Jr. and Sheila Silver, had built in their basement for her. Even though my parents live upstairs, this is the first time in her life that Nan has ever lived alone.

As I guided her walker around the tight corner of her bedroom after we’d finished our chat and a cup of tea, she stopped and held herself up sturdily with her walker so she could confidently perform a short Irish step dance at the end of her hallway. It was a move taught to her by my uncle Shawn, an Irish dance instructor, many years ago.

“I still got it,” she said, nodding at me before making her way back to the living room.

She’s definitely still got it. She has a charm and charisma like no other, with a dry and unintentional humour that has us rolling on the floor in knots without ever trying. Even though she may have married into the name, she is the silver lining of our family, and she can still manage to keep us all in stitches to this very day.

Karen Silver is a children’s author from St. John’s. She hosts writing workshops for local youth through Write On NL in partnership with For the Love of Learning.