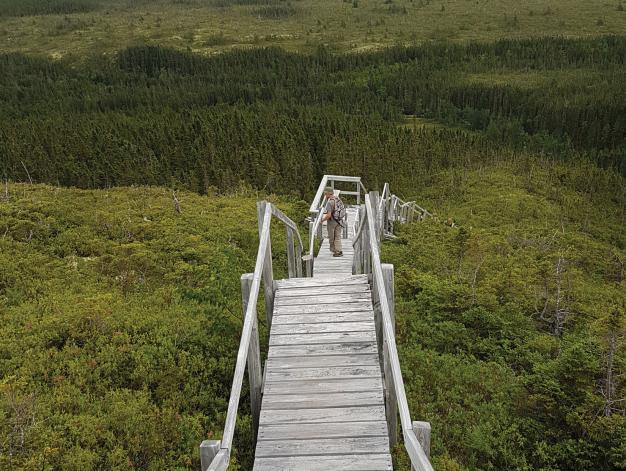 A visiting family couldn't resist the lure of the Alexander Murray Hiking Trail, 2,200 steps notwithstanding.

The Rock, Newfoundland’s apt yet endearing nickname, is like a giant neon sign flickering towards mainland Canada beckoning geologists to come. After my uncle and aunt moved back to her home province some years ago, it was only a matter of time before I packed up my own family (wife and I are both geologists) and went for a visit.

We arrived at their postcard-worthy, seaside home in the quaint hamlet of Coffee Cove at the tail end of a three-week camping adventure through the Maritimes. After warm greetings and long overdue catching up, we set about planning our three days around Green Bay.

One can visit a new place, but you don’t truly experience it until you explore it. For us, that included an afternoon hike on the Alexander Murray Trail, a trek highly recommended by my uncle but not without warning. Stairs, he said. Lots and lots of stairs.

I was hesitant. My body has proven more lemon than show model over the years, and with two kids in tow, aged 11 and eight, our tolerance for difficult hikes is limited. Still, the lure of splendid vistas tugged. A quick web search sealed the deal; Alexander Murray was a geologist.

A Scot born in 1810, Alexander Murray worked as a geologist on both sides of the Atlantic before settling in Newfoundland in 1864, having been named the Geological Survey of Newfoundland’s first director. Among Murray’s notable accomplishments is the first geological map of the island. Fittingly, the geological club at Memorial University in St. John’s, NL is named after him.

Spending an afternoon discovering a trail honouring The Rock’s first rock hound was a proposal I couldn’t resist, stairs notwithstanding. We packed our gear and drove west to King’s Point, a lovely town at the terminus of the southwest arm of Green Bay known for its humpback whale pavilion and pottery shop.

It was a beautiful midweek afternoon when we reached the parking lot at the trailhead of Alexander Murray Trail. The place was nearly deserted save for a couple vehicles presumably belonging to fellow hikers. The trail office was closed and not a soul could be found in the picnic shelter or bathrooms. Perhaps these stairs were scarier than I realized.

Undaunted, we familiarized ourselves with the trail thanks to an information sign affixed to the railing out front of the wooden office building, grabbed our pack and camera, signed the guest book and headed out onto the trail.

The Alexander Murray Trail is shaped like a lasso. With a total length of eight kilometres, the spoke of the lasso runs 1.35 kilometres from trailhead to Moose Barrens. From there, the remainder of the trail forms the 6.08-kilometre loop peaking at Haypook Summit some 350 metres above sea level. Only the short branch trail to Corner Brook Falls deviates from this otherwise perfect lasso analogy. Oh, and there are stairs - 2,200 of them - which is why Moose Barrens has a rest platform.

The sheltered, undulating path through mixed forest before opening up to the scraggy, bog-like Moose Barrens isn’t especially arduous. It alone makes for a nice, relatively short walk with Grouse Brook a handsome companion at one point. Rather, it is the loop where the rest platform becomes essential; first as a staging point to decide which direction you will take around the loop and second, as a place to collapse and confirm your continued presence in this corporeal realm upon return from the summit.

We made it to Moose Barrens with little trouble, gazed at the faint image of the flagpole on Haypook Summit, found a hidden geocache, refuelled with hiking community favourite, the granola bar, and huddled up to determine which direction we would go. It was clear that encircling the entire loop was not in the cards. And with waterfalls in either direction, we were torn. Ultimately, we agreed that the trek to Corner Brook Falls was shortest and thus our preferred destination.

As fate would have it, this choice camewith the most stairs, including a prolonged, steep set down into the gorge in which resides Corner Brook Falls. The descent to the falls was intimidating. My quads wailed in disbelief as we headed downward after so much upward.

At the bottom, a platform with picnic table and bench offered a gorgeous view of a modest waterfall cascading off ancient, grey and red rock into a clear pool of water. It was beautifully stark, and we scampered off the platform to get as close to the falls as possible and just live the moment along with the dragonflies.

The view from Haypook Summit

Having rejuvenated our souls, we ambled back up the stairs to the main trail where another decision awaited. Having come that far, and despite weary muscles, it seemed foolish not to continue onwards to Haypook Summit for what promised to be a spectacular panorama.

The remaining ascent required, yup, more stair-climbing, but as we progressed along the tundra-like ridge approaching the summit, the views grew broader, inspiring us onwards.

Finally making it to the top, we gratefully rested on another wooden platform beneath a Canadian flag flapping in the wind that cooled our strained bodies. The view was incredible, particularly to the north where aged mountains, rounded and weathered, indiscriminately covered in vegetation, embraced the icy, blue Atlantic Ocean.

Of course, we had to get back. Another decision confronted us; continue onward and experience the entirety of Alexander Murray Trail or double back the way we came. The latter was shorterand the path we quickly agreed upon; stairs notwithstanding, once again. Sadly, or maybe ideally, this decision left Roswell’s Falls and Gull Brook Falls unseen and reason to come again.

Exhausted, a bit frazzled, but rewarded nonetheless, we returned to Coffee Cove where I shared our adventure with my uncle while recuperating on his back deck with a well-deserved fermented beverage. When I asked how he had survived the hike, he chuckled. He’d never done it. Too many stairs.