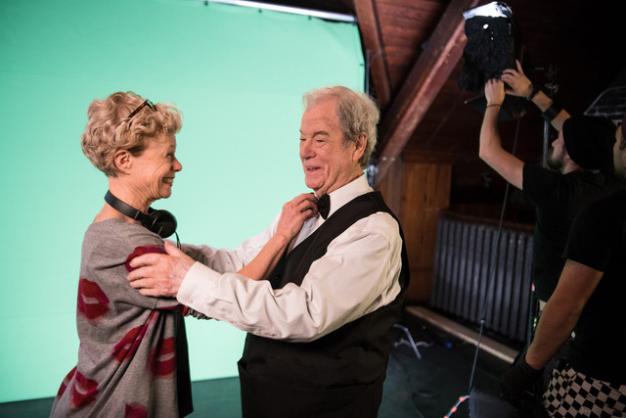 With a new short film, a director partner and a feature film in their sights, Gordon Pinsent has no plans to call “Cut!”on his career

We should all be so lucky to find someone to love us the way Gordon Pinsent loves theatre. It’s a “till death do us part” kind of love affair that has been celebrated on stage, on screen and behind the scenes since he was a teenager in the 1940s.

At 89, he is still writing, acting and collaborating with other creators. In fact, he wrote and starred in a short film that had its Atlantic Canada debut at this year’s St. John’s International Women’s Film Festival in October. Titled Night Shoot, it costars veteran Canadian actress Sheila McCarthy and was produced and directed by Penny Eizenga. Gordon plays aging actor Branch, whose sense of play and dedication to his past characters reopens the heart of an embittered wardrobe mistress (played by Sheila). It’s a delightful short film with two stellar actors who spark up the screen.

Branch is one of many characters in many stories that Gordon has written over the years, and Night Shoot is the second short film he’s worked on with Penny. In 2016, they debuted Martin’s Hagge, in which Gordon created a personification of depression, perhaps leaning on the “old hag” - what Newfoundlanders and Labradorians call sleep paralysis - for inspiration. 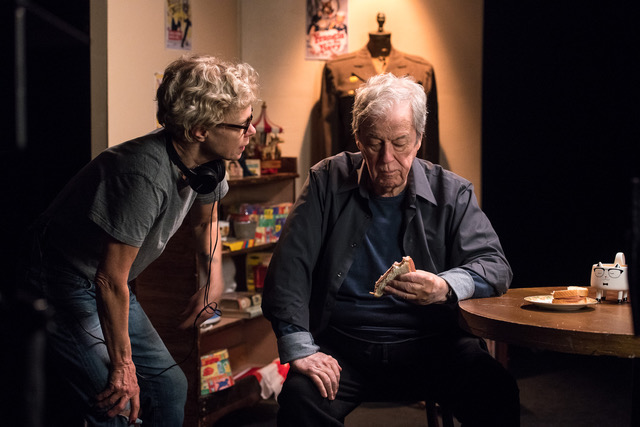 Recalling how their partnership began, Gordon recalls, “She showed up while we were doing an excerpt from a series that might have been a series but never turned out to be one.” Penny expressed an interest in helping Gordon get some of his writings on film. “So there she was, producer-director coming onboard, and it made a lot of sense. I didn’t have to leave the house anymore,” he wisecracks. “She came up once a week and she’d indicate things that I’ve written that she thought would make interesting sidebars to my business, to what I do. Sure enough, we got a few made! And I was delighted!”

He adds, “I get to sit there happily and be able to say I’m still working, rather than having been thrown out with the dust - or the groceries from yesterday - you know, that kind of thing.” He laughs and you know, even without being able to see his face, that his eyes are twinkling with merriment.

Penny says, “I’ve read a lot of what he’s done, from a feature film to a poem, but the stories that appeal to me to do as a short film were ones that fit in with themes that I’m interested in, which is about faulted characters trying to find their voice, and I think Night Shoot fit that category. His [Gordon’s] character ends up winning over the heart of this jaded wardrobe mistress, who has basically shut herself off from the world from grief and pain, and I love that. I love that his sense of play, the character’s sense of play, pulled her out of herself.”

Gordon admits that there is some of him in Branch, and some of Branch in him. “I’ve often gone by the batches of things that I have in my closet and I’ve said to myself, ‘Will they ever see the lighto of day?’” And like Branch, he’s curious about the lives of people or characters he’s only briefly experienced. “So basically, [Branch] was finishing the stories in life of people that would never get a chance and had no real finish from the standpoint of a life’s work kind of thing. And I think [Branch] was thinking of the way that would be in anybody’s life. You could look out the window and see people going by you would never meet in your life, and there’s a wonderful opportunity to study that as a way of living.”

This causes Penny to jump in with her own observation. “Gordon is a very curious person. That’s one of the things I’ve noticed about him, that he observes life, and that’s how he’s created so many interesting, intriguing, quirky characters. He remembers these things in little moments of observation, or connection to some obscure person he met somewhere in some bus station,” she says.

“He has been such a great mentor and has helped me see greater expansion of character and looking deeper into character. Because that, to me, is one of his fortes, is noticing people and the little intricacies in someone’s character and what makes them intriguing. With Martin’s Hagge, one of the things that intrigued me, because I care a great deal about mental health, is how Gordon created this physical being for someone’s anxiety. I’d never seen anything onscreen about that before and, in fact, we are working on trying to get that made as a digital series, focusing on the hagge and anxiety.”

Gordon is quick to point out how Penny has benefited his life and ongoing career. “If I’m not going to complete most of the stuff that I’ve got piled up in the corner in the way of production, Penny would be perfect for that, to be able to polish up my ideas by just allowing me to ramble on. That’s it. I’ve been a rambler and that’s fine, and she laughs. She’s laughing now,” he says, and right on cue, Penny can be heard laughing in the background. “I can stand to have another person say, ‘I like your work,’ you know,” he laughs. “She did say that, and I had to go back and read it myself and I said, ‘He ain’t bad! I’m going to get dressed again and go out of the house and see if I can continue this career until they drag me off. I don’t have to give it up.’

“It reminded me again, as I continued to work with her, that it ain’t too late. It’s not too late for me... I just feel as though I’ve got a long way to go, and at least the feeling is there. Whether or not I do is something else again, and how I treat it.” 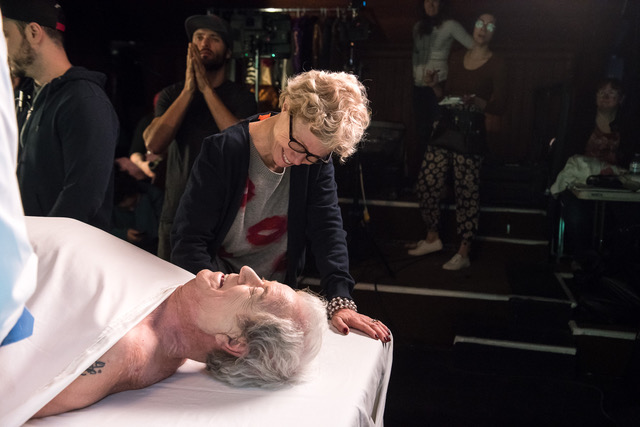 When Penny came to St. John’s for the film festival and the screening of Night Shoot, she had another collaboration with Gordon on her mind. They’ve been working on her first feature film, developed from another of Gordon’s stories. While in Newfoundland and Labrador, she was planning to scout possible filming locations.

“Yes, it is a piece that, to me, needs to be shot in Newfoundland. I think some of the austerity, and the beauty in the austerity, of the landscape is really important to the story about a woman who is escaping a violent relationship and hiding herself away in small-cove Newfoundland. No matter how hard she tries, she is discovered by this aging artist who, himself, is hiding himself away from his own loss of his wife and his grief. It’s a really beautiful story of friendship and almost father-daughter relationship that develops. And I haven’t seen anything onscreen like it in awhile. I’m really excited about it,” Penny says.

The movie is called A Far Cry , but that’s not the title Gordon had wanted for it. “The original title for it was far better than the script that I had written. It was called Violins Regardless. I’ve always loved that title. Nobody knew what it was about and that’s fine with me,” Gordon says. “I finally had to give it up because Penny got a funny look on her face when I said it the first time: ‘Where could we sell one ticket to that?’ Ah, well, there you have it, so we changed it. I used the title in something years ago, when I directed for the CBC. It was the title of something that had to do with a battered wife and it was called ‘A Far Cry From Home.’”

When asked if he would be playing the aging artist in A Far Cry, Gordon mocked offense. “Am I playing the aging-?” he bursts out laughing. “You sound like every producer in Toronto: ‘Would you be young enough to play the aging character?’”

Ageism in the entertainment industry is something both Gordon and Penny push back against. “It’s like there’s no interesting stories to tell about somebody once they hit a certain age,” Penny says, "and sometimes [they] just play the doting grandpa or the grandmother who has nothing to say, just there on screen. I just feel like we need to pay closer attention to people’s stories and they shouldn’t just disappear, and, in fact, their life is full of vibrancy and history that we should be capitalizing on.”

So maybe Gordon will be cast as the young woman’s ex? “That’s an idea!” Gordon agrees, then laughs. “Don’t say that too loud because I’ll be doing it!”

Gordon hopes that they can raise the capital and bring the movie production to Newfoundland and Labrador. “It’d be good for all of us,” he says. “I do manage to get home and play things now and then.” His tone is softer and wistful as he adds, “I still love it back there. It’s fabulous, just fabulous. No better people, I swear.” 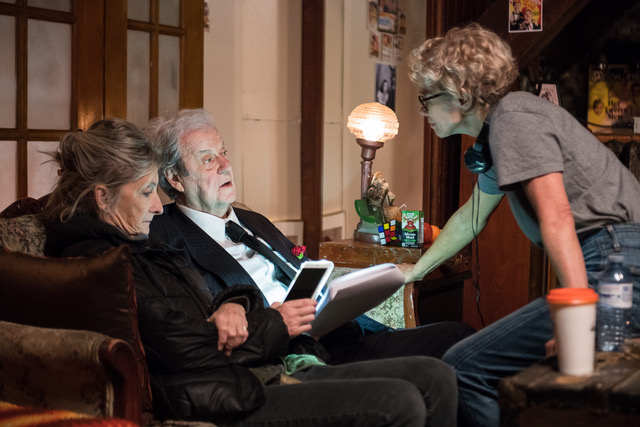 He may have been living away from home for most of his life, but he’s still a Grand Falls-Windsor boy who loves to have a good yarn. He says just the other day he ran into someone on the street who commented on his age, how they couldn’t believe Gordon was 89 years old. “I said, ‘How old are you?’ And we had a great discussion about age and so on,” Gordon says.

What about retirement? Will he ever retire from working? “Retirement? No - not that I’m not getting tired, you know,” he quips. “I can sit and at least discuss with myself what I have left undone, and if I can still come up with a couple of good plans, why not? A good many people think it has very little to do with age, it has to do with, first of all, energy - that’s very important. And if I can find that, then I guess I’m going to stay in the same place until I’m satisfied with what I’ve done.”

He says, “Life is still interesting. But it’s curious the emotions that take over when, in fact, it looks as though you are leaning towards giving it all up. I certainly have never wanted to use that as a truth. I didn’t want to say, ‘Well, that’s it for me.’ I wanted to be dragged off stage, that’s what I wanted…

Click here to view the trailer for Night Shoot.