Gnat, do you mind … Santa Claus?

“P’raps,” said Harry. “Or Uncle Pell. Or, to really trick the youngsters, an old feller from Bun Town.”

The day before, on his way home from Forkey Birch, Harve Hinker had propped a dark-green fir beside the schoolhouse step. Miss Brett had the tree brought inside in the morning to have it decorated for the Christmas concert. Now Miss Brett interrupted Harry and Gnat’s speculating and had them help Spud Spurvey balance the tree in a bucket of beach rocks and steady it with string tied to the wall.

Like Santa’s elves selecting toys, two dozen youngsters pawed through boxes of delicate Christmas balls and crimped streamers they’d hauled out of the storeroom and started to dress the tree, hanging the familiar decorations in the exact locations as on last year’s tree.

Amid the chatter of youngsters transforming the naturally naked fir into a festive indoor wonder that streeled tinsel icicles to the floor, Harry and Gnat continued to whisper. “If not from Bun Town, then someone from Horse Cove,” said Harry.

“Or a total stranger, if there’s either one around,” said Gnat.

Reluctant to leave the glittering tree, most youngsters oohed and aahed at garland and dangling angels while back-pedalling towards the cloakroom to fetch their coats. Harry and Gnat, though, grabbed their jackets and scrammed.

“I got an idea,” said Harry the second his boots hit the snowy ground.

“Tomorrow night after the concert, we’m goin’ to find out who’s disguised as Santa Claus.”

“We is?” Gnat asked incredulously.

Next morning, Harry and Gnat were late for school. “Sorry, Miss,” Harry said as they sidled in the door and scoochied into their seats. “Aunt Chook’s goat got out of his pen and we had to help her catch en.”

“Umm,” said Miss Brett, struggling to preserve her Christmas spirit since only five minutes ago, while standing at the window, she’d watched Harry and Gnat dodge up from the wharf lugging what looked suspiciously like a bundled-up net.

Offering no confession, Gnat brushed his crow-wing bangs off his forehead and squirmed in his desk.

It was duckish when Miss Brett dismissed her pupils and urged them to hurry their suppers and hustle back to the school before folks began arriving for the concert. Harry and Gnat didn’t scravel home. They darted behind the schoolhouse and squeezed into a thicket of gnarly spruce. Moments later they reemerged, arse-foremost, towing the bundled net Miss Brett had seen them lug up from the wharf. Fingers firmly gripped in the mesh, like thieves scoating away priceless Persian carpets, Harry and Gnat crossed the schoolyard and disappeared down the path leading into Druid’s Droke, the stand of 100-year-old black spruce between the school and the Shot Hole. Had anyone been nearby, they might have heard Harry say, “Santa Claus always comes this way when he leaves the school after givin’ out the presents.”

And they might have heard Gnat respond, “He do.”

Later, the Christmas moon rose over the Crow Cliffs, its jolly face beaming like an ornamental bulb. It shone down on Brookwater so brightly that flashlights weren’t needed to guide concertgoers to the schoolhouse, where desks had been shuffed against the walls and chairs had been placed in rows in preparation for the performances.

Harry and Gnat were not among the youngsters swarming around the Christmas tree, pointing and poking at the presents their parents had piled underneath its bottom branches. Folks found seats and even the glummest - Aunt Hood of the sour puss, for instance - smiled at the swarm squawking and squalling with anticipation.

No one missed Harry and Gnat. Although Ma was on the verge of questioning her darling boy’s whereabouts when he and Gnat - furtively it seemed - slipped in from the porch and joined the crowd.

No one noticed Harry nudge Gnat and point out Old Man Farley sitting at the back, beneath a portrait of young Queen Elizabeth. “T’idden he then,” said Harry.

Although he didn’t say so to Harry, Gnat was kind of glad Old Man Farley was in the audience. He feared the old man might seek vengeance if he ever discovered who’d tailed out the trap in Druid’s Droke.

When Miss Brett indicated, Harve Hinker turned down the kerosene lamps in their wall brackets until the stage lampswere the brightest in the schoolhouse. The moon, carefully keeping its beams from overpowering the dimmed lamps, bent its head and peeped through a windowpane. 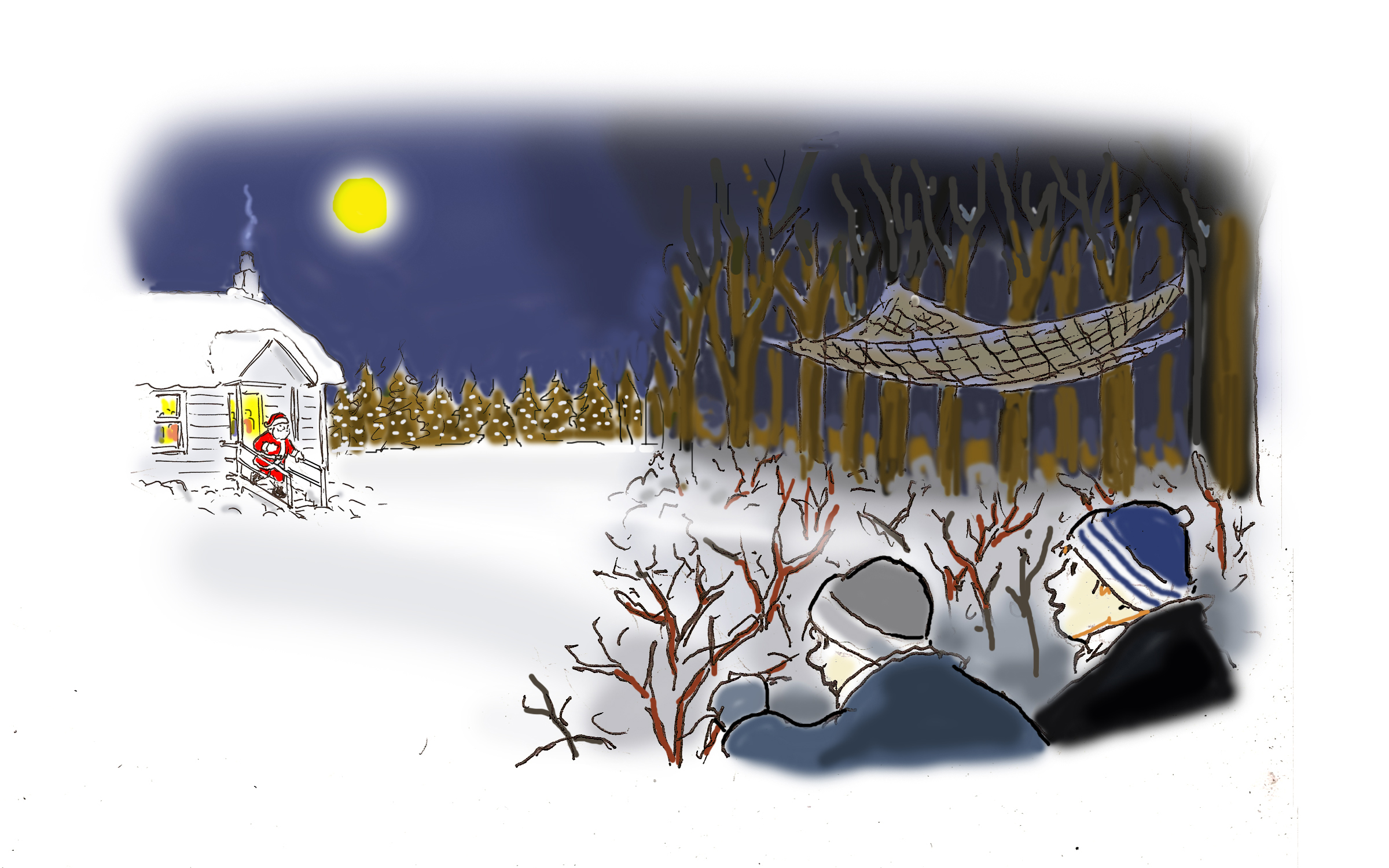 The concert was gem-dandy. Applause followed every song. Laughter and stomping cheered humorous recitations, especially when young Teddy Verge - renown in Brookwater for his nasal challenges - allowed his fingertip to creep into his nose during his recitation about a mouse that gnawed holes in Christmas stockings. Christmas merriment smothered Harry’s snort when Sally and Olsen Tetford topped their afternoon rendition of “Let It Snow.”

The concert played for two hours or more. The level of oil sank even in the dimmed lamps. The moon clung to the eave to delay its drifting off towards the western horizon.

During the finale, Harry and Gnat scuffed from foot to foot among all the youngsters crammed on the stage belting out “Jingle Bells,” knowing that Santa Claus - well, whoever was rigged up as Santa Claus, Harry thought - would arrive before the final refrain ended.

As bellowed strains of “Oh what fun it is to ride” rang to the rafters, Santa Claus bounded in, ho-ho-hoing and his belt bells a-jingle. He stopped in front of the Christmas tree and thumped down his sack of … apples, as it turned out.

“Ho, Ho, Ho,” Santa repeated as he reachingunder the tree and commenced handing out gifts.

Studying the beard’s true nature, Harry stared at Santa’s face as he accepted his gift. He ripped the wrapping off the cap gun he’d practically been bawling for since the toy pistols had appeared in Uncle Pell’s shop. Harry barely glanced at his gun; his eyes were glued to Santa’s chin, and before Gnat managed a practice toot on his mouth organ, Harry dragged him away from the crowd and out the door.

In the moonlight, they booted ’er for Druid’s Droke to be on hand when Santa Claus left the schoolhouse and ran into their waiting trap. The pair of rapscallions lurked in the bushes and watched Santa jog away from the schoolhouse and approach the droke, and the length of bank-line stretched bar tight across the path. Heedless of any impending peril, Santa trotted into the droke. When his soot-black boots struck the trip-line, Santa gasped. Possibly, he said a bad word when a web of netting fell from the trees and snared him like a giant spider’s prey.

Suddenly, the night turned pitch black. Maybe the moon and stars, ashamed of brazen boys’ behaviour, blew out the sky-lights. In the darkness, Harry and Gnat tripped over sticks and roots as they untangled themselves from the bushes and stumbled to unmask Santa Claus. Positive they would find a man jannied up as Santa, Harry was dumbfounded when they searched left and right, front and back, in the darkness and discovered a net as empty as a water haul.

Mind that Santa Claus trap, Gnat? If Sherlock Holmes, magnifying glass in hand, had examined that empty net in broad daylight he wouldn’t have found a single trace of Santa Claus, not as much as a solitary fake whisker.