Yurt Life: Off the Grid in NL

This Codroy Valley couple has taken radical steps to live off the grid.

No indoor plumbing, no television, no electricity - no joke. Chris and Melissa Battiste recently traded these basic amenities, plus their modern home and just about everything they owned, for a life they say is less stressful and more meaningful. This summer the couple erected and moved into a yurt - a circular dwelling style that dates back to ancient Mongolia - on their 10-acre property in the Codroy Valley. If all goes according to plan, the couple and their dog, Baloo, will call this off-grid structure home sweet home year-round. 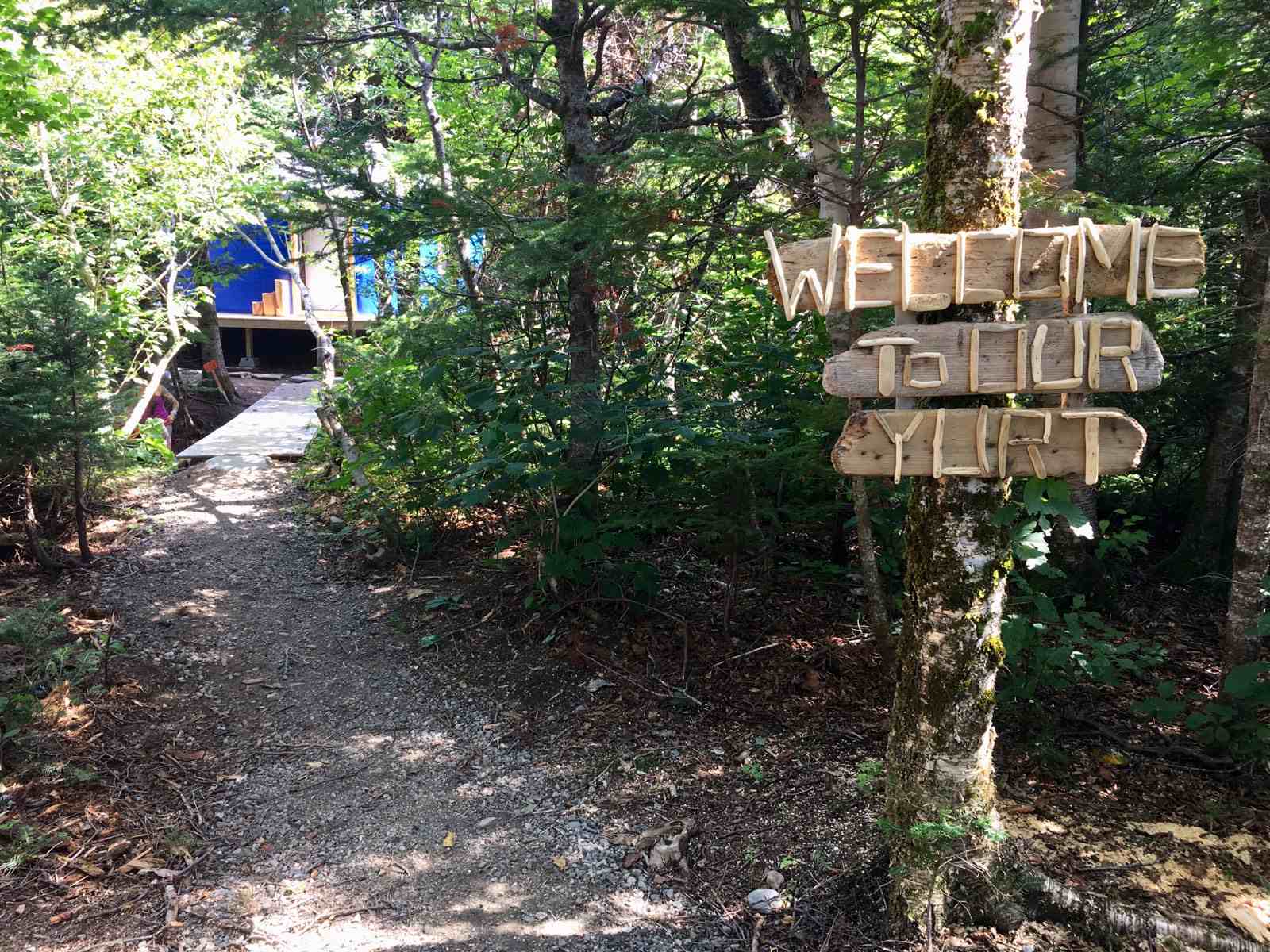 And it really is a sweet home, both inside and out. Tucked away in the woods in a secluded corner of their sprawling property, the average highway driver would never even know it’s there. A footpath meanders its way through the forest, over with bridges across streams and up stairs to the final walkway leading to their humble homestead. “Welcome to our Yurt” reads a rustic driftwood sign a few steps from their front door. Inside, the beautiful wooden latticework (a staple of yurt design) is decoration enough, alongside the couple’s personal photos, books and a print of Max Ehrmann’s famous poem, “Desiderata.” A window at the top of the yurt offers a view of the stars as they fall asleep in their hammocks (which they swear offer a better night’s sleep than a traditional bed.)

Although the yurt itself (purchased from a company in British Columbia) took only a few days to assemble, leading the simplistic, off-grid lifestyle they now enjoy has been years in the making.

“This was something we always wanted to do,” says Chris, originally from Port aux Basques, NL. (Melissa hails from Alberta.)

The couple originally planned to wait until much later in life to achieve their goal of living off the grid, until a near-tragedy turned their pipedream into a real priority. In 2011, Chris was driving to his then-home near Cold Lake, Alberta, when his truck hit black ice, left the highway and smashed into a pole. So brutal were his injuries, the accident report actually stated he died at the scene.

“Doctors don’t know how I survived or recovered to the point I did, but I did,” says Chris, who spent the following three months recovering in hospital. In addition to a broken elbow, a broken jaw and a cracked skull, Chris sustained a traumatic brain injury (TBI), forcing him to medically retire at age 37. Doctors told Chris, a former computer programmer, that he could mitigate the effects of his TBI (which include difficulties with comprehension and maintaining focus) by living as stress-free as possible. It was this unconventional “prescription” that spurred the couple to move forward with their plan sooner rather than later. To that end, they packed up and moved to the Codroy Valley in 2012 and, little by little, started simplifying. 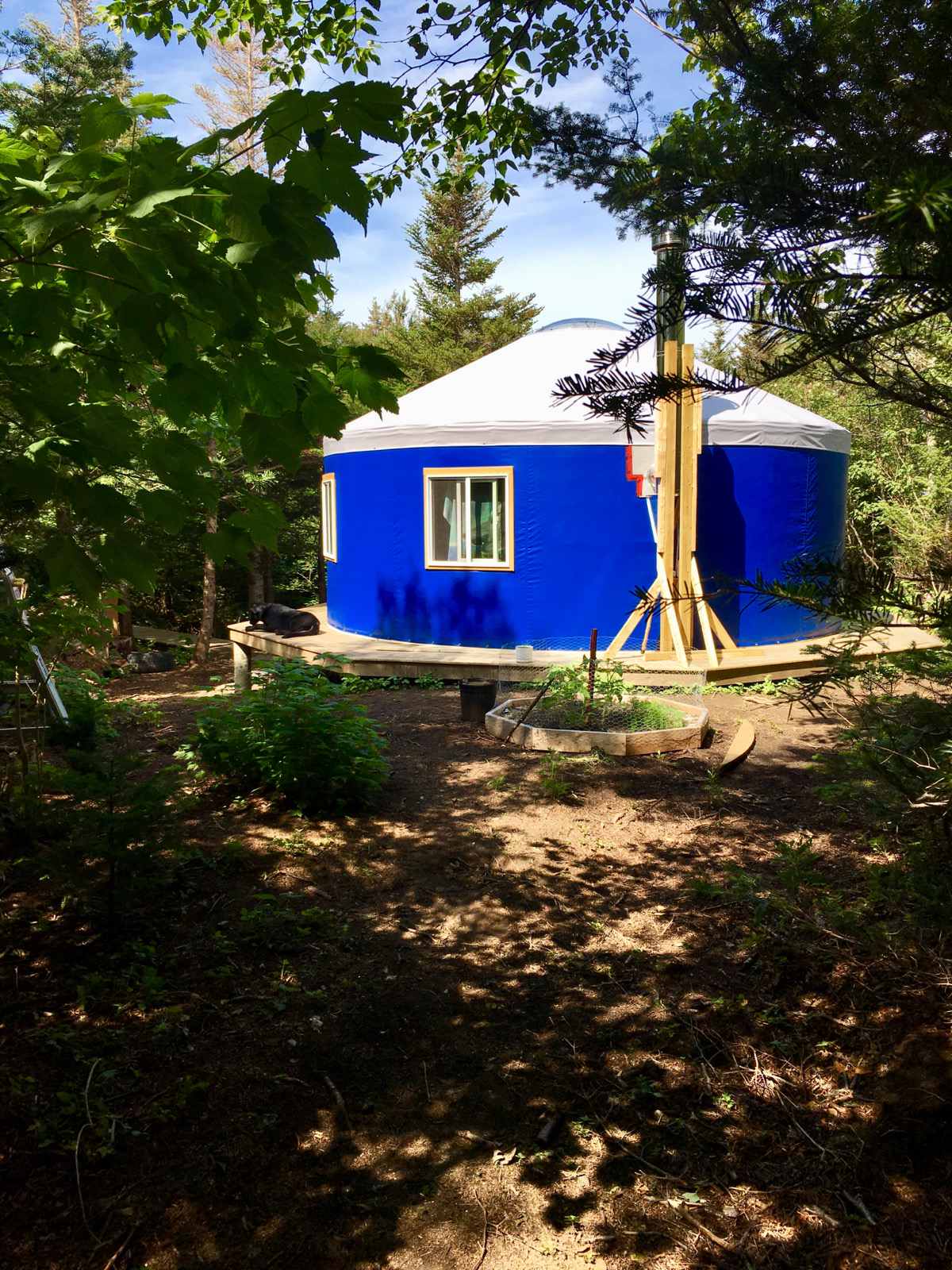 In preparation for their massive lifestyle shift, the couple went through several stages of purging their belongings. After all, with roughly 314 square feet of space, their yurt can only hold so much. Not only was the process easy, it was enjoyable, they say. In fact, the more items they let go, the more free they felt. In this world of excess, Chris and Melissa say it’s an exercise they believe would do a lot of people good.

“I like what Brad Pitt said in the movie [Fight Club]. It’s a stupid quote, but it makes sense. He said, ‘The things you own end up owning you.’” Chris continues, “If you think quads and cars and iPhones make you happy, it will make you happy. But it’s a short-time high.” True happiness, he now believes, can’t be derived from material things. And these days, all it takes to put a smile on Chris’ face is a walk in the woods, the sound of a trickling brook, or a simple cup of tea.

“It’s perspective,” explains Chris. “[When] my jaw was broken, I couldn’t really have a cup of tea easy. But the minute the wires came off my jaw you would not believe how good that cup of tea tasted. And now I still hold on to that feeling.” 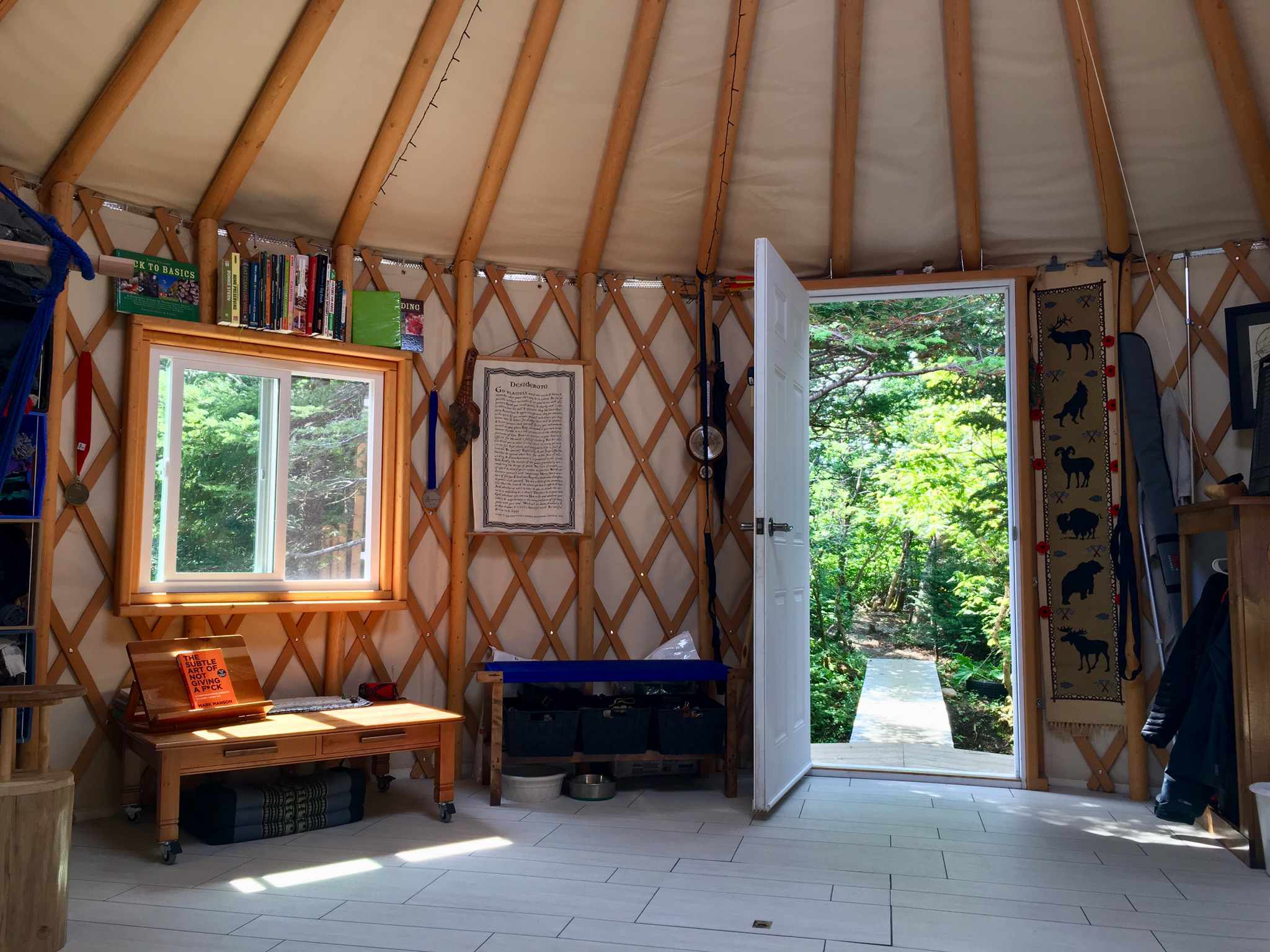 While they’re certainly revelling in the simple pleasures of their new reality, that doesn’t mean there is no work to be done - quite the opposite. There are the regular chores: firewood to cut, preserves to can and water to fetch from the brook. Clothing is washed in a small, manual washer and hung to dry.

They’re also getting started growing their own food, with ambitious plans to eventually produce and forage 100 per cent of what they consume.

“We have tomatoes, basil, rhubarb, thyme and dill, just a few little things until I get a real garden set up,” says Melissa, adding she also plans to construct a greenhouse. (The couple are mainly vegetarian, but when they do eat meat, they prefer that which can be sourced from their own backyard: moose, rabbit etc.)

A trained cabinetmaker (and a “jill of all trades,” according to Chris), Melissa takes the lead on most major projects in and around the yurt. She is currently in the midst of building two sheds, one for firewood and one for tools, and has plans for a root cellar.

“Going back in time is the best way to describe it,” says Chris of their lifestyle, adding they live much the way their grandparents’ generation did. That means reading by the light of a kerosene lantern, cooking in a wood-fired oven and, yes, going to the outhouse. But for Chris and Melissa, these aren’t hardships; they are reminders of their independence. But of all they’ve achieved so far, they are especially proud to have severed ties with electricity.

“I would never touch that again,” Chris vows. “I just hate to see what electricity is doing to the environment and to people’s pocket books here in Newfoundland.” 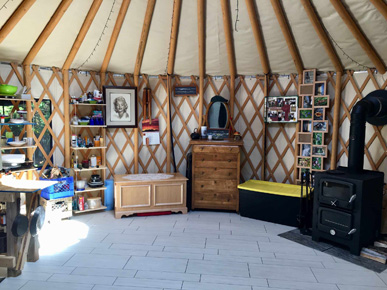 Not to mention, when post-tropical storm Dorian swept through the province in September, knocking out power to many on Newfoundland’s west coast, it was life as usual for Chris and Melissa. They had no power to lose.

That same weather system, which walloped the Wreckhouse area with winds in excess of 150 km/h, provided an excellent test for the Battistes’ new home. It survived unscathed. Chris and Melissa were unsurprised, though.

“If you think about the physics of the yurt, the reason the Mongolians had it so long is because it’s round and when the wind hits it, it just goes around it,” says Chris. “Whereas in our house you could hear the wind coming and then you could feel the house shake.”

Of course, the winter will bring its own challenges, and the Battistes say they are eager to meet them head on. They are determined to live this life for as long as they are physically able because they believe this is the way they were always meant to live.

They know their rustic way of life isn’t for everyone. But they hope their story inspires others to take small steps towards simplifying, for a taste of the true joy they get to feel every single day.

“Considering I got a pretty bad brain injury, I love my life - I love it. It’s peaceful and it’s zen,” says Chris. “I’m getting to do exactly what I was born to do.”

Melissa and Chris are very courageous and are examples of how the simple life is better for the soul. We live in a world where people are on a treadmill fooling themselves into thinking that more and bigger is better. They're showing us that less is more and healthier, both physically and mentally. What an inspiring story!