Cheers to the Champion

When you get talking to Brenda Tobin, it quickly becomes clear how her business won over the public vote in our summer 2019 Cone Wars: Search for a Soft Serve Hero contest. She loves her customers and they love her back. The first thing she and her partners did when they found out their soft serve had been voted best in the province was plan a“customer appreciation day” to give out free ice cream and loot bags.

Brenda and her business partners - her son Trevor, his wife Krissy and Brenda’s husband, Ed Dyke - have been operating Tobin’s Convenience on Hamilton Street in Labrador City since 2015. They have two other businesses in town as well: Tobin’s Mini Mart and High North. At Tobin’s Convenience, Brenda says they stock “everything from a clap of thunder to a baby’s fart!” Of course they sell pop and chips, bars and beer, lottery tickets and smokes, but they also sell homemade pizza, cold plates, sandwiches and other meals from their own kitchen, plus sweet treats from their bakery.

“This store is also known for the candy,” Brenda says. “We have a large selection of retro candy [e.g. Gold Rush bubblegum nuggets, black licorice pipes, BB Bats the first candy ever put on a stick]. We have a big display of machines that have 30 kinds in them, I guess, and then we got a bunch that we bag also. So overall, we got roughly 100 different kinds of candy in stock all the time or most of the time.”

And like a good neighbour, Brenda says if a customer comes in looking for something they don’t have in stock, such as tea bags, “I’ll go out back and grab a couple of tea bags and give to them, to hold them over… Or it could be a half a cup of sugar or a bit of spice, it could be anything… Little things like that goes a long way with people.” 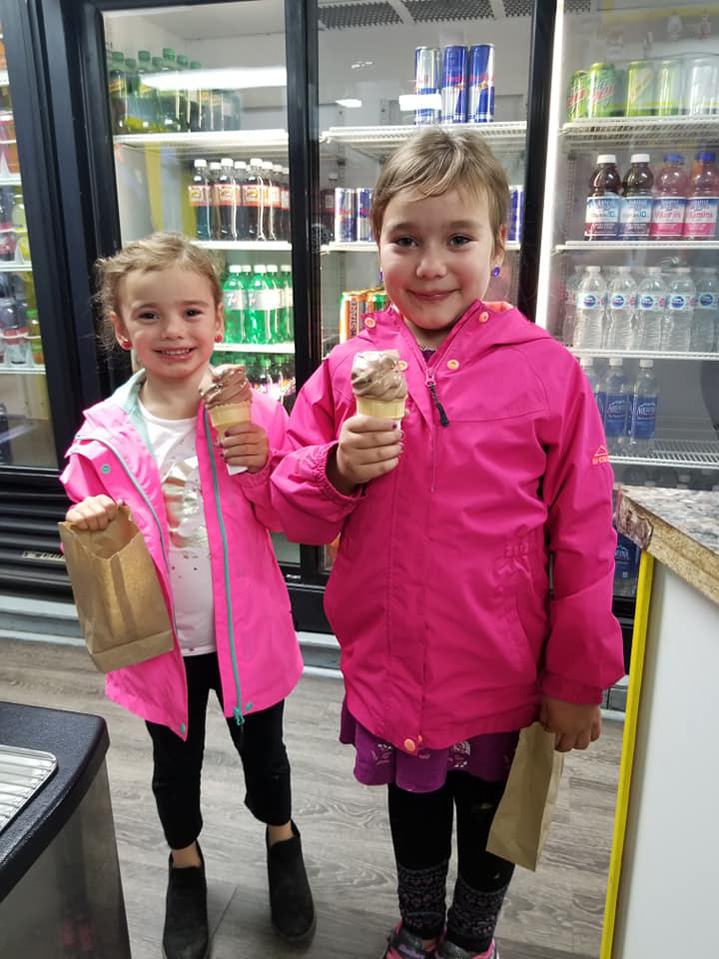 Customer service is key to the business, and Brenda says her staff deserves a lot of credit for their success and good reputation. They are friendly, efficient and generous. “Our staff decided from Day 1 to donate all their tips,” Brenda says. “Since we’ve been opened we’ve probably given back about $6,000 to the community.” They’ve funded non-profits such as food banks and the women’s shelter, local schools, Lions, hospital auxiliary, Scouts, Girl Guides and others. And at the end of the school year, Tobin’s Convenience donates certificates to the youngest graduates. “The school passes those out to all the little kindergarteners and they come in and we take their card and we give them a free ice cream.”

Speaking of ice cream, what is it that makes Tobin’s Convenience soft serve the best in the province? “The ice cream that we serve here is just so creamy and thick… I don’t know even how to explain it. People just really, really love the ice cream here,” says Brenda. At the height of summer, there could be six girls working behind the counter serving ice cream to customers from Labrador City, Wabush, Churchill Falls and Fermont, Quebec.

They have not one, but two soft serve machines, and Brenda admits that one makes the creamier soft serve that folks rave about. It’s the older one that came with the business that Brenda and her partners bought. That store had been around since the 1980s, and was also known for amazing ice cream. “We spend a fortune making sure that we keep it serviced because it produces such good ice cream.”

The soft serve machines are quiet now as the outside temperature dips and summer treats fade to memory. But come April, the ice cream will flow again and folks will flock to Tobin’s Convenience, 2019 Cone Wars Champion, to enjoy the best soft serve in Newfoundland and Labrador.