Comedian Andy Jones: From CODCO to Order of Canada 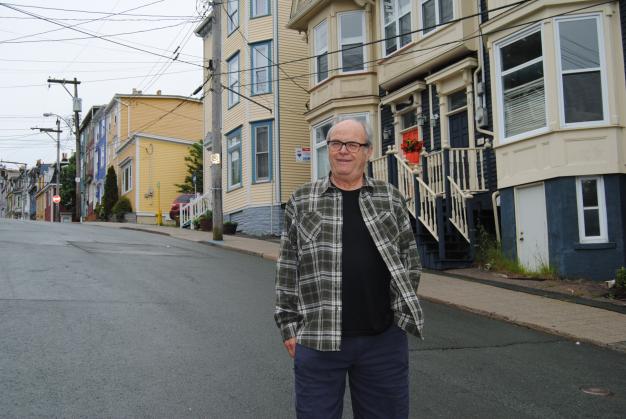 Local comedy legend Andy Jones was named to the Order of Canada in June of this year, joining the ranks of national treasures like Sarah McLachlan, Margaret Atwood, Neil Young, Prince Charles, Gord Downie, Alex Trebek, Mike Myers, Catherine O’Hara and more. Awarded the second-highest honour for merit in the Canadian system of orders, decorations and medals, Andy was recognized for his contributions to the Canadian arts and entertainment landscape.
The actor, writer, comedian and director is well known for his early work with CODCO; for starring in, co-writing and co-directing the feature-length film The Adventure of Faustus Bidgood; and for his role in the movie Rare Birds alongside William Hurt. On a national and local scale, Andy has made innumerable appearances on television and in theatre, as well as a series of one-man shows.
“I was happy to get a nod of any kind at this stage of the game,” the bashful Andy says of his recent appointment.
This year so far has been one of reflection on Andy’s many accomplishments, especially with the CODCO reunion in Halifax in the spring.
“It was really fun, and you know, again, it’s nice to get a pat on the back,” Andy says of the reunion show, which took place in March at Andy’s alma mater, Saint Mary’s University. He was reunited on stage with his longtime colleagues Mary Walsh, Andy Jones, Greg Malone and Cathy Jones (also his sister).
Neighbouring Nova Scotia and its capital city, Halifax, have always been supportive of Newfoundland arts, he explains. “They’re a great audience for Newfoundland material. They really appreciate it. To go back and to have all that kind of warmth from people … It was good to just go back in a very pleasant way down memory lane.”
Though Andy notes that the troupe sometimes clashed in terms of creative differences, the CODCO reunion recalled “those times when things were cooking and we just had fun together,” he says. “We each picked a sketch that we liked and no one else knew what the sketch was that we’d picked until they [the other members of CODCO] got there… We each got to do some good, good stuff,” he says.
Andy was quick to acknowledge the contributions of cast member Tommy Sexton, who died in 1993. “The truth is that all of our best stuff came from when we were getting along and having fun, having lots of laughs.”
In watching anything Andy is present in, from the early days of CODCO onwards through to the 2018 play “Men of Misfortune” with Greg Malone, it seems like Andy has fun with whatever he’s working on.

Standing Up in Canada
He draws heavily on his life experiences as a Newfoundlander when creating content. As part of the first generation of Newfoundlanders to be Canadians, his experience was formative.
“It was a different time in Newfoundland because, I guess, there were those questions about whether they had made a mistake by joining Canada or not,” he recalls. “Some people said there wasn’t a great deal of difference from before Confederation, although that may or may not be accurate. Of course, we were the first generation of Newfoundlanders to be Canadians. So we wanted to take advantage of everything in Canada, being Canadians, but we found that we were the ‘joke people’ - which we didn’t like. We wanted to set that record straight,” he explains.
“The general narrative was, you know, you guys are sucking off the tit of Canada… we were really, really very angry about that. We had a trenchant wit and we had great music and storytelling and visual arts, all that stuff. We wanted to make sure we got that out to them, so they realized that they got a lot out of the deal,” he says of Newfoundland and Labrador joining Canada.
The sentiment still rings true today, almost 50 years after the beginnings of CODCO, and with 2019 marking 70 years since Confederation. “People are still very interesting and still quite different in Newfoundland. You can really tell if you go somewhere and then come back. Economically, we had a little burst of joy there when Danny was in power and we had oil money coming in, but it seems extremely worrisome now again. I feel somehow as if we’re back to square one in some ways, but it does seem that we have a sense of ourselves and a sense of pride in ourselves that we did not necessarily have when we joined Confederation, although there always was a feeling that Newfoundlanders had almost a superiority complex that went along with the inferiority complex. There was that sense that everybody kind of knew we had something special here.”
Andy calls the artist uprising of yesteryear “one of the great success stories of Newfoundland.” He adds, “Now, you look at all the summer festivals, all the playwrights, the novelists - can’t keep track of it all.”

No topic too taboo
Newfoundland and Labrador has put in a lot of work to prove that we’re not the butt of a joke - we’re the jokesters. Simply look to the cast and writers of the nation’s political parody powerhouse “This Hour Has 22 Minutes” to see a heavy Newfoundland and Labrador presence.
While “22 Minutes” focuses on Canada-wide issues, much of CODCO’s content was centralized on provincial issues, news, politics, traditions and more. CODCO delved into - or exposed, explored or eviscerated, depending on the skit - a list of hot-button topics: religious upbringings, post-Confederation feelings, local political blunders, the Christian education system, basic rights for LBGTQ people and much more. The show absolutely ruffled a few feathers - including the CBC, which refused to air a particular sketch titled “Pleasant Irish Priests in Conversation.”
“We did have that problem and that’s the reason I left CODCO,” Andy says. “But the truth of the matter is, we were very free. The company that produced us in Halifax was Michael and Paul Donovan of Salter Street Films. We couldn’t go far enough for them.”
Present-day, Andy’s main artistic concerns aren’t about what he can “get away with.” As a man who always seems to be wearing many hats within the local arts scene, it’s more about making time to fulfill all of his ongoing passion projects.
“I'm trying to write a piece about my son Louis, who died in 2014. He took his own life after a long struggle with mental illness, and I’m still trying to write something about him. And I’ve actually gotten all of his medical records. I’m going through them very slowly, trying to get some help from whoever I can get help from to help me do research, get all that stuff together. And that’s kind of my main goal right now.”
Andy is also compiling an archive of material created by his late brother Michael Jones, and he’s working on a new children’s book set to come out in 2020.
Much of his summer was spent helping out with the 25th anniversary celebrations of the Hant’s Harbour Heritage Museum and at the Bonavista’s Church Street Festival.
When asked if there was anything on his “creative bucket list,” Andy remarks that he felt he was always free to create as much as he wanted to create, but “I guess I would like to have done more things,” he adds.
“I always wanted to be on stage doing comedy and from the time I was a kid, I got to do that. So, I would have liked to do more. I would love to have done a third feature film,” he muses. “I had wanted to work with my brother on that and he wasn’t able to do it for the last few years, but I did have a script but I don’t know if it’ll ever be done,” he shares.
“But really, generally speaking, I think that - because I live in this country and because Newfoundland has such a rich culture - I have never been stumped by anything in terms of creativity. Funding, yes. Dear God, I wish we had full funding for everything; but ultimately, there was no nefarious force that could stop us from doing anything - maybe just a slightly cheaper version,” he jokes.
With the local arts community lobbying for a $3-million increase to ArtsNL over the next three years, there’s a collective hope that a province seemingly “rich” in arts and culture can better support artists - like Andy Jones and the legendary CODCO cast and crew,  plus all the wonderfully talented people who put Newfoundland and Labrador on the map with their artistic ability and comedic clout.