Exploring the World In A Vintage Campervan 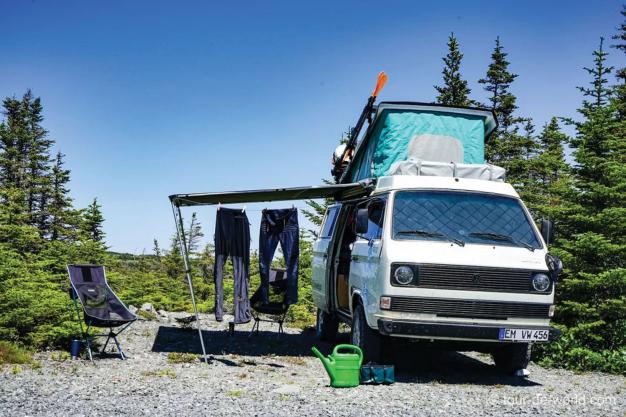 In the early hours of a July morning, a white 1980s-era VW Vanagon camper van with European licence plates rests in the parking lot of Bowring Park, off Waterford Bridge Road in St. John’s, NL. In a few hours this gravel parking lot will be full, but for now that van is alone. Inside, Benny and Tanja and their dog Jago are waking up. Soon, the side door will be open and they will step outside, coffee in hand, to greet the day.
For the past two-and-a-half years, Benny and Tanja, origi-nally from Germany, have been travelling around the world in their home-on-wheels, first in a Unimog, and more recently in the VW Syncro Vanagon. They’ve been to 16 or 17 countries so far, covering Eastern Europe, northern Africa and Canada in the Unimog. It was on that cross-Canada trip - done in the dead of winter - that they realized the Unimog was too big. Returning to Germany, they swapped vehicles, choosing the Vanagon for its size and its off-road capabilities.
They named it Smudu, refitted it for adventure travel with a second fuel tank, rooftop solar panels, a rebuilt camper interior and dirt-capable tires. Then they returned to Canada, this time intent on exploring the eastern parts of the country - their previous trip was mostly spent out west - before heading down the eastern side of the United States, then over into Mexico and through Central America. And that’s about as detailed as their plan gets.

Most people embarking on a road trip in a camperized vehicle stick to one continent. But little things, like getting a van across the Atlantic Ocean, don’t bother Benny and Tanja. They used a roll on, roll off (RoRo) shipping service to get their van into Canada from Germany via Belgium.
The couple refer to themselves as overlanders, and to understand why this actually means something, we need to take a dive into the traveller subculture. Travellers, while sometimes being tourists, separate themselves from the cargo-shorts-and-fanny-pack crowd in a few ways, the most visible being their luggage (backpacks, not suitcases) and choice of lodging (hostels, not hotels and never resorts). Among these travellers, the land-based folks tend to use vans or converted vehicles, as opposed to travel trailers or motorhomes. And this van subculture (look up #vanlife on your preferred social media for a glimpse at the lifestyle) is further divided into people who prefer the overland style of vehicle, typically a vehicle outfitted for off-road travel. And Smudu is most definitely off-road capable.
It’s in the emptiest places, where they are completely alone, that Benny and Tanja are happiest. They’d prefer to be surrounded by nature, off the beaten path. Their Instagram is filled with photos of their van in remote places, sometimes doing things most people wouldn’t attempt in a Jeep, let alone a 30-year-old camper van.

Off the Couch and On the Road

This entire story can be blamed on television. One night, back when they still lived in a conventional, rooted-to-the-ground home, the couple was watching a documentary about people travelling around the world. It looked like something they wanted to do. But, not wanting to make a rash decision, they slept on it. Next morning they still wanted to do it.
The preparation was a bit stressful, Benny admits, since they had to make sure they had all the proper insurance and a plan, and that everything was prepared in advance of their travels. Plus they had to sell nearly everything they owned - the few remaining furniture pieces are stored in Benny’s parents’ attic - and they had to prepare their vehicle for being lived in. They figured it all out, though, and on March 17, 2017, they pulled out of the driveway in Freiburg, Germany to start their world tour. A few miles down the road they got a phone call saying Benny forgot his phone. They turned around, drove back for the phone, said goodbye again, left again. Alright. This time they were really on the road to everywhere.
“You realize on the first maybe three or four days that you’re really travelling now,” says Benny.
“That you’re not on vacation now and that you don’t go back in two or three weeks,” continues Tanja.
In the beginning they were intent on seeing the entire world. Then they visited some places they didn’t really like and realized that having enjoyable experiences was more important than crossing countries off a list, so they modified their plan. Now, they only go where they want to go and see what they want to see. That’s what brought them to Newfoundland and Labrador - they wanted to see icebergs and whales.
They had no preconceived notion of exactly what they would find, since they don’t look at travel guides when visiting a place. It’s all part of their plan to experience each new adventure with no expectations. It helps add to the wonder and “wow factor” of each new experience, says Benny. Once on the island, they heard there were icebergs in Langdon’s Cove, Green Bay. So they headed there, and they were not disappointed.
Had they seen a great big iceberg in a tourism guide, then in real life only seen a small berg, they would have been disappointed, explains Benny. And had they gone to somewhere like Twillingate - the default place tourists are told to go for iceberg sightings - they would have been surrounded by crowds
of people.
They prefer to experience things in as natural and authentic a state as possible, which is exactly what happened in Langdon’s Cove, where they met a local who took them capelin fishing and gave them a feed of the little fish. Then, just down the road, they saw a whale. Newfoundland bucket list complete.
But they still wanted to see the eastern part of the province, so on they ventured, finding their way to St. Vincent’s on the southern Avalon, where they stood on the beach and watched families of humpback whales just metres from the shore.
After completing the Irish Loop, they found themselves in St. John’s. On the day that started in Bowring Park, their plan was to fill the van’s water tanks, pick up some groceries and do some online surfing and blog updating. Maybe they would go see Cape Spear’s lighthouse, but then again, maybe not. After all, that’s how they roll.
Beyond St. John’s, they planned to head west to hike the trails and see the fjords in Gros Morne National Park before heading across the strait to Labrador.
After driving across Labrador into Quebec, they’ll head south through the Eastern United States and spend the winter in Mexico, then next spring and summer make their way toward Alaska, because they haven’t been there yet, says Tanja. But things could change. They never make
definite plans to be across a border because then they may find themselves rushing to make a deadline for a visa or a permit, which would take all the enjoyment out of their journey. So while they have a big picture idea of where they’d like to go, the actual plan always remains relatively short-term and open to change.
“We’re not sure yet,” says Benny of their future travel plans. “We go the Labrador highway to Quebec,” he repeats, as if to drive home the point that anything beyond that doesn’t matter yet.
For these two, life really is an adventure free of expectation.

To follow along on the adventures of Benny and Tanja, visit their blog, www.tour-de-world.com, where you’ll also find links to their social media accounts.