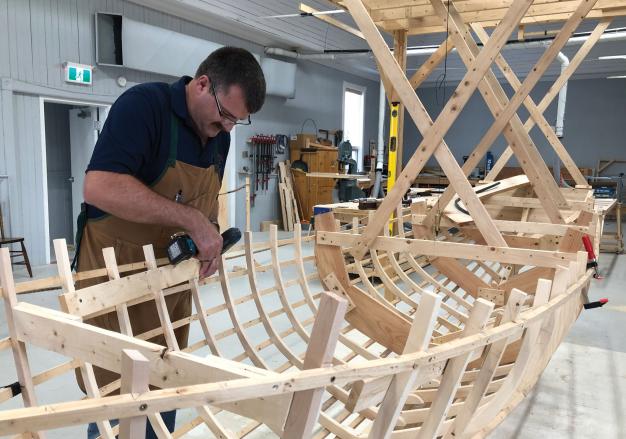 On a cold winter’s day in Wild Cove, Lewis Roberts is outside working on his latest boat. He’s a fisherman and a boat builder, the third generation of his family to build the boats essential to the local fishery. He’s built all manner of boats, from punts all the way up to schooners. This boat, although he may not have realized it at the time, would be one of the last he’d build. It’s a passenger boat, made entirely of wood, 60 feet long. He’s building it in his yard, taking occasional breaks from building to shovel off the accumulating snowfall of an early 1940s Newfoundland winter.
Each year, says his great-grandson Tony Roberts, Lewis would begin a boat on the first of January. To get the larger boats from the build site to the water when they were ready to launch, he would make a slip. It was a fair distance to the water, so there would end up being more wood in the slip than in the boat.
Local boys, including Tony’s father, would climb aboard the boat on launch day. They would hold on as the boat slowly started on its dry land voyage to the sea, picking up speed as it went through the neighbour’s potato patch and over vegetable gardens, across the road that is now a main street, faster still across the beach until, with a large splash, it came to a bobbing halt in the sea. It was, says Tony, Twillingate’s first rollercoaster.

The Isles Wooden Boat Builders Museum is open through September. Learn more about it online at Isleswoodenboatbuilders.com. To follow along with Tony’s boat building, and for news on wooden boats in Twillingate, head to the Facebook group Twillingate Wooden Boat Discussion Group.