Farming For The Future 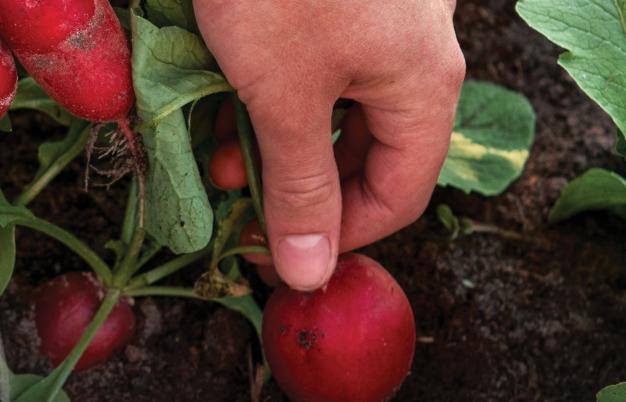 Part two of a three-part exploratory feature on agriculture in Newfoundland and Labrador.

In part one we delved into the lives of local farmers, from a retired man who’s seen the highs and lows, to a first generation farmer just getting her business up and running.
This time, we discuss what the provincial government is doing to improve food security and increase agricultural activity in Newfoundland and Labrador. To get the bigger picture, we’ve talked to the Hon. Gerry Byrne, Minister of Fisheries and Land Resources; Dr. Ashlee Cunsolo, director of the Labrador Institute at Memorial University; and representatives of the College of the North Atlantic on their new Agriculture Technician Co-op program set to start this month.

In 2018, the Ball government made the lofty goal to double food production in Newfoundland and Labrador by 2022. It’s all a part of their Way Forward, a strategic plan of improving the province on an economic and social level.
At the moment, we import 90 per cent of the food we consume. We put the question of how to change that to Department of Fisheries and Aquaculture Minister Gerry Byrne.
The first thing to address, the minister says, is land. “Farming is a land-based activity; it’s dependent on land and it’s dependent on access to good land, good arable land.”
So the government identified 62,000 hectares (that’s almost 150,000 acres) of good land suitable for farming and streamlined the land leasing process, he explains. Good farming land is now protected from being scooped up for something like suburban sprawl. When future farmers come forward, either to start a new farm or expand an existing one, they’ll already know what land is available.
Government is also bringing back cold storage facilities throughout the province, so farmers can store their produce and sell locally grown food year-round.
With the vast majority of food eaten here being grown elsewhere and shipped in, the province is a long way from food security. “There’s no doubt that we’ve got a job ahead of us, but it’s an important job and it’s one that we can succeed in accomplishing,” Minister Byrne says.
He notes that in 1949, the year Newfoundland and Labrador joined Canada, we were almost completely self-sufficient when it came to food production and we had close to 4,000 active farms. We’re a far cry from that today. In fact, a Statistics Canada report reveals that between 2011-2016, NL dropped from having 510 farms to just 407.
“It’s very startling, it’s very telling… And if that’s not a call to action, I can’t think of what would be any greater motivation than to try to reverse the tide of that. And that’s why our government established our agriculture sector plan, where we took agriculture seriously.”

Class is in Session

One of the reasons there was such a rapid decline in farmers in the recent past was the absence of post-secondary training programs for agriculture right here in the province, Byrne explains. As of 2018, this was the only province or territory in Canada without any formal post-secondary agriculture training program.
“Farming is not what it used to be; it’s a highly technical, scientific profession. With advances in soil science, advances in agricultural engineering, advances in better understanding
of farming economics, farming is becoming a very, very technical profession, and I could say almost a lab coat profession, in some respects,” Byrne notes. “White lab coats are as much a part of farming today as would be a green thumb.”
So this September, when students return to school at the College of the North Atlantic Corner Brook campus, 16 of them will make up the inaugural class for the Agriculture Technician Co-Op Program.
The program was some time in development, including consultation with industry stakeholders in the agriculture sector who all helped design a curriculum. “The aim, of course, is to produce a program that reflects what we are being told people need in order to have skill sets to serve them as people who are engaged in farming enterprises in the province,” says Brent Howell, dean of engineering technology and indus-trial trades at the College of the North Atlantic (CNA).
“It’s a pretty broad scope of courses in the program,” says instructor Sharon Wright. Over two years, students will cover topics such as soil as well as computers, field safety and how to manage a farm, including bookkeeping. It’s not just teaching students how to run a farm, but also how to operate their businesses successfully.
Newfoundland and Labrador was in need of its own agricultural program. There were people who were interested in farming but didn’t want to leave the province for further education or just couldn’t afford the move (the closest program was in Truro, Nova Scotia, run by Dalhousie University).
“So this is an opportunity for them to be able to get the education here in their own province. The other thing is the courses that we’re developing; we’re developing them with an eye to Newfoundland and Labrador in particular,” she says. Our vegetable and fruit production, as well as certain aspects of the NL growing season and climate, are unique to the province, so the CNA courses are geared towards farming right here.
“From our perspective, you know, we see this as a positive step towards at least providing an opportunity for people who might want to be in the business of farming or working for an existing enterprise,” Howell says.
This co-op program is also a valuable contributor to the Way Forward’s goal to double food production in the next few years, as it will definitely help to have more farmers trained to work in this province.

In June, Memorial University announced a brand new initiative for the Labrador Institute: the purchase of the Grand River Farm (aka the Pye Farm) in Happy Valley-Goose Bay and the creation of the Pye Centre for Northern Boreal Food Systems. It was a move two years in the making, says Dr. Ashlee Cunsolo, director of the Labrador Institute.
While the university is the owner of the farm, “we’re looking at ourselves in partnership with community. And so this whole property is looking to continue the community legacy that Frank and Joyce Pye really started, where we can work together to create great science that’s useable and timely,” Dr. Cunsolo says, “but also where we continue to bring people together around food and around growing their own food and being on the land.”
In that two-year period, they heard that farming in Labrador is just one part of the food system. People are still actively engaged in hunting, harvesting, fishing, and foraging for wild foods and berries. “Those pieces connect to agriculture, so people might use fish bones in their garden or harvest kelp from the land and put that in soil. So for the way people are connected to the land in Labrador, it’s all part of a food system,” she explains. That’s all interconnected with people’s culture and families, as well as their physical and mental health.
Labrador’s circumstances also pose some unique challenges, Dr. Cunsolo notes. It’s a colder climate and requires different farming strategies. They also have really long growing days but a short season. There are certain crops that thrive here, and there are plenty of local farmers who’ve already skillfully developed strong farms.
The Pye Centre for Northern Bor-eal Food Systems will be used for scientific research and education, Dr. Cunsolo explains, which she’s excited about. It will also be a “farmer-led, citizen science approach.” Research outreach will be a major component, so when they learn something new, they’ll do their best to share it and incorporate it into local farming to improve production.
“And then the other part is around a social enterprise, so we really want to make sure that this farm stays as a central core to the community,” Dr. Cunsolo says. “And so we want to make sure there’s opportunities for people to come and grow in a community garden setting.”
While the Pye Farm was recently acquired, the Labrador Institute is wasting no time: “This summer we’re really hitting the ground running.” They’re getting the farmland back into shape and doing intensive mapping of the land, including using GPS and 3D imagery of the soil. Once that’s done, they can section off plots and determine where the community plots and experimental plots will be. The fall and winter will be spent mapping those places out and, hopefully, by next summer, they’ll start a full growing season.
Food security is a major issue in Labrador, Dr. Cunsolo points out. While Labrador is attached to the mainland, the communities are quite remote and it’s expensive to import food even over the highway. It’s worse again for residents on the north coast where there are no roads and people rely on ferry services in the summer. In winter, people drive snowmobiles into communities or fly food in, which is very expensive.
So the high cost of food means people are very food insecure, especially along the coastal and northern
communities, she says. Part of the Pye Farm’s goal will be to look at ways a social enterprise can grow food in Labrador that’s then shipped to the north coast.
They also have community freezers that they can help fill with different produce. “We’re always looking for ways to support community and support food security,” she says.

The plan to double food production by 2022 might be very ambitious, but Newfoundland and Labrador is on its way there. Through identifying and protecting good agricultural land and creating new educational opportunities, it all adds up.
The new agriculture co-op program at CNA will hopefully pave an easier path for more people to become farmers. “And obviously, the overall objective [of The] Way Forward is certainly to… increase food production and reduce the reliance on our external procurement of food,” Brent Howell concludes.
There’s also been a real shift in our attitude when it comes to food, with more people wanting local options, instructor Sharon Wright observes. She runs a farm in western Newfoundland with her husband, and they’ve seen more and more people coming by looking for locally grown produce. “That’s been a trend that we’ve seen over the last number of years,” she says.
People are looking at the freshness aspect when they look for food. For instance, next time you’re at a supermarket, look for the harvest date on fresh produce. Wright did this at a grocery store and found a head of lettuce had been plucked in California 26 days before she held it in her hands.
“People are realizing now that if you can buy fresh food, it lasts longer, it tastes better, it’s crispy,” she says.
Minister Byrne agrees that by growing our own food, we ensure we get the best food for our tables. As food ages, its nutritional value also goes down, he explains. The health-iest food is fresh food, something
we can’t get if it’s trucked across the country and then loaded onto a boat.
Food security encompasses so many issues, and they include employment and economics. More people growing food means there are more jobs, which in turn also supports rural development and rural communities.
It’s essential to the wellbeing of each and every one of us. If there ever was a situation where the mainland was having trouble feeding their own, “then we would be the very last to be served, and that’s what food self-sufficiency is all about. If commodities become scarce, choices are made by those who own the commodities,” Byrne cautions.
“And we may not be in their first line of priorities. And that’s not a situation, I don’t think, any of us
contemplate ever happening on a daily, weekly or monthly basis. But believe you me, it can happen. And we in Newfoundland and Labrador know that it can happen because we’ve already seen that it happens.”