A Friendship Forged in Gander and Gambo on 9/11 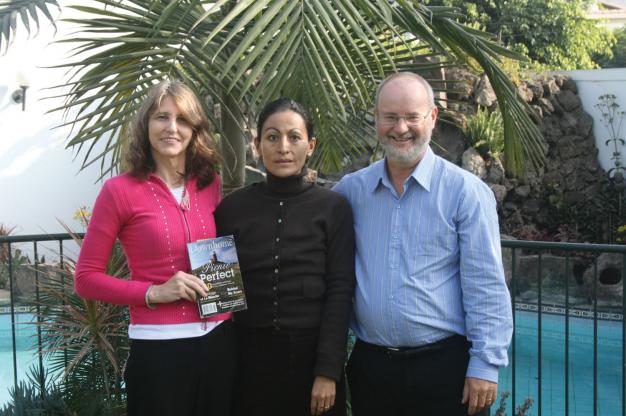 A day that marked terror in the U.S. and abroad also marked the start of a sweet friendship between a stranded Peruvian woman and a Gambo family.

Time quickly slips away, so that it’s sometimes hard to believe that 18 years have passed since the tendrils of global terrorism reached our front bridge in Gambo, NL, a short distance from the now internationally famous Gander airport. Everyone’s life would be forever changed; ours was no exception.

I was a science teacher at Smallwood Academy, where my two daughters were students. On the morning of September 12, 2001, we arrived at the school parking lot at our usual time, but the lot was eerily empty. Immediately I thought, who on our staff had passed away? Did something happen to one of our school children? I went inside and asked the school secretary, Linda Dwyer, what was going on. She said because of the hijacking and crashing of the planes in the United States the previous day, all of North American airspace was closed and all planes had been ordered to land immediately at the nearest airport. Flights had already landed at Gander International Airport, about 45 km away. Our school was among those asked to help house stranded passengers, as there were so many more than area hotels could accommodate. We were asked to prepare to welcome 258 passengers from two planes, a United Airlines and a Delta flight.
The operation was coordinated by the Canadian Red Cross and our school administrators, Dennis Lush and Murray Fudge. Camp cots and other materials soon arrived and the conversion of the school into accom-modations began. We removed student desks from a number of classrooms and replaced them with camp cots, sleeping bags and pillows. Gift bags containing toothpaste, shampoo and other toiletries were handed to the arriving passengers. Information booths were put in place to answer questions.
Local fireman Craig Russell noticed one lady who seemed extremely nervous. Her name was Isabel Vivanco, and her arrival at Gander via United Airlines flight 067 was hardly ideal. She had been travelling alone from France after a brief visit with her husband’s family. She was three months pregnant and bound for her home in Lima, Peru. Instead she was caught in a whirlwind of events where many decisions were beyond her control. She was in a strange country, in a very small town compared to her home city of almost 10 million people. She had very little knowledge of the events that were unfolding and no means of communicating with her family (cellphones weren’t as prevalent then as they are now).
I was asked if my wife, Helen, and I could bring Isabel to visit our home for part of the day, to give her a break from the noise and commotion at the school. She could watch the events unfolding on TV in the comfort of our home.
Of course we agreed, and we approached Isabel to introduce ourselves and invite her to our home. She accepted, and while we nibbled at lunch and took in the constant stream of devastating news, Isabel gradually opened up to us about her home, her family and her life in Lima. She used our phone to call her family, to reassure them she was safe and to receive comfort from them in return. Her dad, naturally, was very concerned about his daughter. He kept insisting that we purchase warm clothing for her to wear, thinking she’d landed somewhere in the far north. We assured him that it was 23°C outside, quite warm for September, and would remain that way for the next few days.
Throughout the afternoon we could see the anxiety fade from her features as she became more comfortable with us. When the time came to return to the school, she asked to stay with us, and so she became our guest.
That evening, I spread out a map of Newfoundland and a larger world map on the table to help her visualize our location in reference to Peru. I was explaining about the French islands of St. Pierre and Miquelon when her face brightened with a big smile at the words “Terre Neuve.” She kept repeating excitedly, “I know this place, I studied it in school.”  She insisted that I return to Smallwood Academy the next morning and ask the administration to make a special announcement to the passengers, especially those who spoke French, that they were in Terre Neuve. It was amazing the reaction of passengers when they realized that Newfoundland and Terre Neuve were one and the same.
Isabel stayed with us the entire time that passengers were grounded in Newfoundland. We shared information about our different cultures, and our education and political systems. We took her to see several local communities and spoke about the importance of the fishery and the role it played in determining our culture and traditions.
When the call came for the return of all passengers to the school by midnight on September 15, we drove Isabel to the waiting bus. We hugged each other and said our goodbyes, then watched as our new found friend stepped onto the bus to begin her journey home. Her last words to us were, “If you ever visit Lima, Peru, please visit me. I want to introduce my family to the family who gave
me comfort and safety when I desperately needed it.”
As the bus drove away from the school, I thought that this would be the last time we would ever see Isabel Vivanco. Fate, however, has a way of bringing people together.

From NL to Peru

In August 2009, Helen and I travelled to Lima, Peru, to visit my brother, Rodney. He had married a Peruvian girl named Roxana Cochola and moved to her hometown of Lima in 2007. We were there to celebrate the imminent birth of their child.
When we arrived at Jorge Chavez Airport, there was one thing on our bucket list: visit Isabel and her fam-ily. We placed a call to her home that was answered by her brother, who said Isabel was in France but would be returning within a few days. He assured us that she would be contacting us to make arrangements to visit her family. They were excited about the opportunity to meet the family who had welcomed their daughter into their home in Newfoundland when she desperately needed comforting. We were looking forward to meeting Pierre, the child she had been carrying when 9/11 occurred. He was now seven years old and also had a younger sister.
After visiting Isabel, we finally understood why she was so nervous at the time of her arrival in Newfoundland. Her family lives in an upper class, gated community, tended by armed guards. All traffic entering was stopped at the gate, and licences were required and surrendered upon entry. To visit her, we had to hire a taxi with a special licence, not the regular street taxi. So just imagine, when Isabel and the other passengers were suddenly offloaded from the plane and bussed to our town with no evidence of security, she became overwhelmed by what she perceived was an extremely dangerous situation.
Our visit to her home was very special and one that we will always remember. A few days later we were invited to visit her parents, an elderly couple who were still working at the family business. Her dad, who was in his 90s, still showed up for work. His son, who was educated in Boston, explained that his father was once asked about retirement and replied, “Only people who are ready to die, retire.”
Our visit to Lima was completed with the birth of my niece, a healthy baby named Valentina.
Isabel and my family were first brought together in Gambo, NL, by a tragic set of circumstances in 2001. Much happier circumstances brought us together again in 2009, this time in her hometown of Lima, Peru.