Good Things Brewing - The History of Beer in NL

While Newfoundlanders and Labradorians remain faithful to their tried and true brews, excitement for the craft beer scene is spilling over into the province.

Note: this story was first published in the February 2016 issue of Downhome. Since then, several craft breweries have opened in the province.

There’s nothing quite like sitting back after a hard day’swork and cracking open a cold one, especially among friends. That refreshingfirst sip can set you spinning into nostalgia, fondly remembering backyardbarbecues, shed parties, bar shows, and all the way back to where and when youhad your very first swally.

Beer is not just a social drink, but a cultural one thathelps tell the story of where we came from and where we may be headed.According to the Encyclopedia ofNewfoundland and Labrador, Newfoundland and Labrador beer history can betraced back to the colonists at Cuper’s Cove (present-day Cupids) in the early1600s. Used as an alternative to fresh water, beer was a staple of the diet.But it wasn’t until the 1800s that local breweries began popping up - even with the temperance movement gaining steam.

Some might say that in this province, next to the weatherand politics, there’s nothing that we love arguing about more than the meritsof our favourite beers (even if the only reason we drink our chosen beverage isbecause our father, grandfather or great-grandfather did so before us). Aftermoving to Toronto in 2011, local beer historian and enthusiast Chris Conway, 30, began questioning the origins of the province’s tried-and-true brews. He started searching for answers online and when he couldn’t find enough information, he decided to gather his research and create a website of his own. As a result, the blog “Newfoundland Beer History” was born.

While many different beers have come and gone, Chris discerned there are five in particular that have stood the test of time in thisprovince. With the exception of Black Horse, which hails from Quebec,these beers were previously produced by one of three independentNewfoundland breweries: Bennett Brewing (which produced Dominion Ale);Newfoundland Brewery (India Beer); and the Bavarian Brewing Company (Blue Starand Jockey Club). In 1962, the “big brewers” bought the local breweries,inheriting those beloved Newfoundland brews with them. Canadian BreweriesLimited (later Carling O’Keefe and now Molson Coors), which already stockedBlack Horse, bought Bennett Brewing; Molson (now Molson Coors) purchased theNewfoundland Brewery; and Labatt (now part of Belgian-based Anheuser-BuschInBev) acquired the Bavarian Brewing Company. While all of Newfoundland’sbreweries being bought out at once may seem rather curious, Chris (who iscurrently employed as a brewer at Folly Brewpub in Toronto, while workingtoward his PhD in the History of Technology) says several other historians havenoted that it falls in line with what was happening elsewhere in the country atthe time.

“A lot of those dealings are pretty common towards howthose breweries treated the Canadian market through the later 20th century.They kind of were all on this path of buying out smaller breweries, so they didit in basically every province...But it was a trend across Canada, pretty much, that they’d just kind of collude a little bit to buy out some breweriesand take over the market so that they all had basically an equal share.”

While some of the old Newfoundland brands were shelvedfor good to make way for new products, the loyal following of the five famousbrews saved them from the same fate. All these years later, those beers arestill around. Perhaps part of the reason for this boils down to effectivemarketing that inextricably linked those brews with Newfoundlanders’ very identity. Chris notes that the Bennett brand had perhaps one of the mostsuccessful campaigns, which used traditional Newfoundland songbooks and coastersprinted with local legends and the tagline “a Newfoundland tradition” tosell Dominion Ale.

“They advertised very strongly toward this idea ofNewfoundland culture, towards trying to get Newfoundlanders to really buyback into the idea that even though they’d been bought, they’restill authentically Newfoundland...And so if your father was drinkingBennett, you’d probably continue to drink Bennett because it’s what thefamily drank. And you kind of get tied into this idea that these are your localbeers,” Chris says.

“For a long time it would be really hard to tell ifthey were brewed by somebody other than these small breweries. It took me’till 2011 to really figure out who actually owned which of these brands."

Good For What Ales You

While Labatt and Molson Coors are still going strong in thisprovince, the ’90s saw a revival of sorts in independent brewing with both theQuidi Vidi Brewing Company and Storm Brewing (currently located in Mount Pearl)setting up shop. In 2008, YellowBelly Brewery & Public House joined thescene. Chris counts Quidi Vidi’s 1892, Storm’s Coffee Porter and YellowBellyPale Ale among his favourites. It’s beers such as these, he says, that tie moreinto the American craft beer movement, where beer, like wine and spirits, is enjoyedfor its flavour.

“As a small brewer myself, I really value that locally ownedand locally produced beer...And so for me, the flavours of those beers are someof the best beers that are being produced in Newfoundland. Storm’s CoffeePorter has tons of flavour. (It’s a) really nostalgic brand for me because it’sone of my first kind of craft beers. Same thing with Quidi Vidi 1892. That’sthe beer I used to drink a lot in my undergrad because I knew it was locally ownedand it was a really flavourful, really delightful malty beer.”

While Newfoundland may be slower coming into the craft beergame, its certainly made inroads. Chris credits groups like the NL Artisanal& Craft Beer Club (formerly Beerthief, which special orders craftbeers that are not usually available in the province) and restaurants likeRaymonds, The Merchant Tavern and The Adelaide Oyster House in downtown St.John’s with helping to change the beer landscape in the province.

“So they’ve really tied us into the craft beer movement inNorth America, where it was kind of more difficult to do before. And I thinkbecause of that, we’ll start to see some more breweries open in Newfoundland,because people have been exposed to the flavours and want to try local versionsof it,” Chris says. 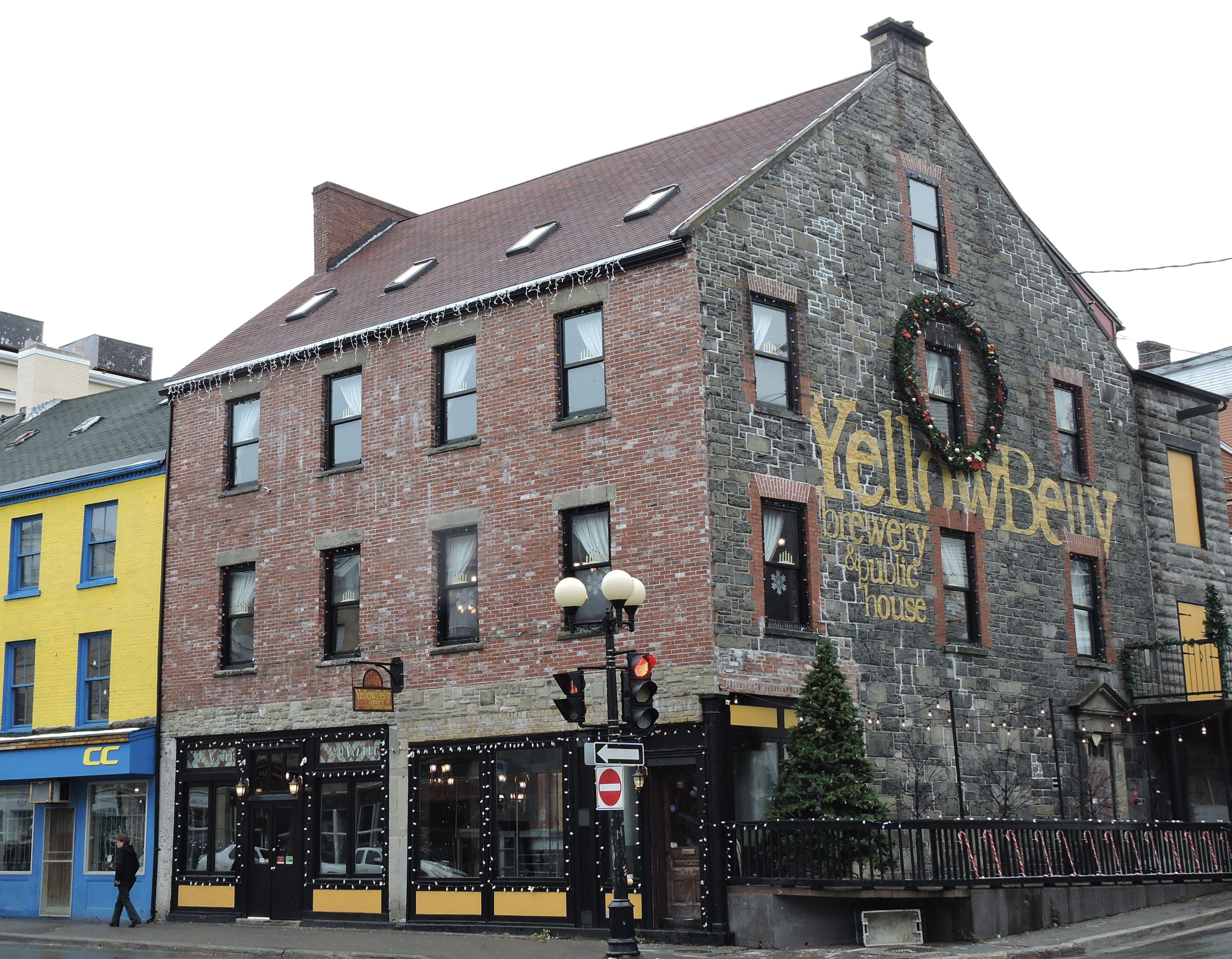 Standing four-storeys tall at the corner of George and Waterstreets (locally known as YellowBelly Corner) in downtown St.John’s, YellowBelly Brewery & Public House looms over the heart of thecity’s entertainment district. A testament in stone to a bygone era, thebuilding is a character in and of itself - one that exudes beauty, strength andresilience, but is not without its scars. Originally constructed in 1725, thisis where the Great Fire of 1892 was finally extinguished, though one couldnever tell looking at it today.

“The building burned out, but not down, many times,” saysCraig Flynn, who owns and operates the business with his wife, Brenda O’Reilly.He explains this was the corner of downtown where immigrants from Wexfordgathered, and they were known back in Ireland as Yellowbellies because theirhurling team wore yellow sashes around their waist.

Having been involved with the restaurant industry for thepast 20 years (the couple formerly owned and operated the Stonehouse restaurant, and they opened O’Reilly’s Irish Newfoundland Pub 20 years ago),and seeing the increased interest in the craft beer movement, establishing arestaurant/brewpub seemed like a logical step for the enterprisingpair. After acquiring the building, Craig spent more than five years painstakinglyrestoring it to its former splendour.

“I believe in historical preservation. And this building hads o much potential, so much character. When I brought my engineer in here first,he said, ‘You’re sure you don’t want to tear this thing down?’ It was super dilapidated. We had to take the entire front off the building; we cleaned all the brick and put it all back in place,” Craig says.

Once the nuts and bolts of the restoration process werenailed down, Craig started thinking about what he wanted in a beer. Through amutual friend in Toronto, he met his brewmaster, Scottish-born, award-winningbrewer Liam McKenna (the beer Liam once made at the Dublin Brewing Company wasconsidered so good that Guinness paid publicans not to stock it). Together theyresearched and developed their own brews. Today, in addition to their seasonalbeverages (like their beloved Mummer’s Brew), YellowBelly offers four signaturebrews: Fighting Irish Red Ale, St. John’s Stout, Wexford Wheat, and YellowBellyPale Ale. In 2010, in honour of the Cupids 400 anniversary celebrations, YellowBelly released Cupers Cove Pale Ale, which was made with stinger nettles instead of hops. Since then, Craig says they’ve moved towards trying tointegrate more Newfoundland products into their beers, such as local cranberry and crabapple juice, and apples and bakeapples. He says they’re always tryingto give patrons new tastes.

“There’s so many styles of beer, like there’s so manyvarieties of wine. And then within that style, there can be so many differentvariances. It’s kind of unlimited, almost, what you can do flavour-wise withbeer… that’s what makes it so interesting.”

In seven short years, YellowBelly has earned a spot as oneof the go-to places to grab a pint in St. John’s - and it’s little wonder. Brewmaster Liam has been dubbed “Canada’s best brewer” by respected beveragewriter Billy Munnelly. YellowBelly was ranked number four by Vacay.ca™ in its 2012 list of the “Top 24 Brewpubs in Canada,” and recently, an episode ofthe Food Network’s “You Gotta Eat Here!” was filmed there. In addition to tours and tastings, YellowBelly hosts trivia nights and live music, and it has also become a favourite place for wedding receptions (Craig and Brenda had their ownthere in 2008). As for their success, Craig credits it to a combination of the quality of the beer and food, having a fantastic brewmaster and staff, the charm of the building, and their patrons who come in, have a good experience and spread the word to others.

“We’re lucky, but it took a lot of hard work...you’ve gottamake your own luck. Again, it’s all about our team,” he says.

With brand loyalty becoming a thing of the past and more microbrewery beers available on the shelves than ever before, Craig says it’s an exciting time for beer enthusiasts in the province.

“As the multinationals conglomerate more into these massivecompanies that own 60 and 70 per cent of the world beer market, the more educated consumer tends to want to buy something that’s produced with a little bit morecare, not mass-produced, not using any preservatives, not over-chemicalizing abeer because it has to travel across the world. We’re trying to be greener aspeople. That’s kind of where I see the trend of craft brewery going,” he says.

“We’re planning on developing a brewery around the bay. Andone of the things that we’re going to be doing is we’re going to be trying tomake our carbon footprint as low as possible. We’re going to use the seawaterto help cool our tanks. We’re going to process all of our own microbial wasteand then even recapture the methane off that to use to fire the boilers and things like that."

While he thinks it’s a long way from taking over, Craig says  the craft beer scene is making quite an impression, with the discerningtastebuds of consumers leading the charge.

“I can foresee where craft has up to close on 10 per cent ofthe local market, perhaps within the next five, 10 years or so,” he says.