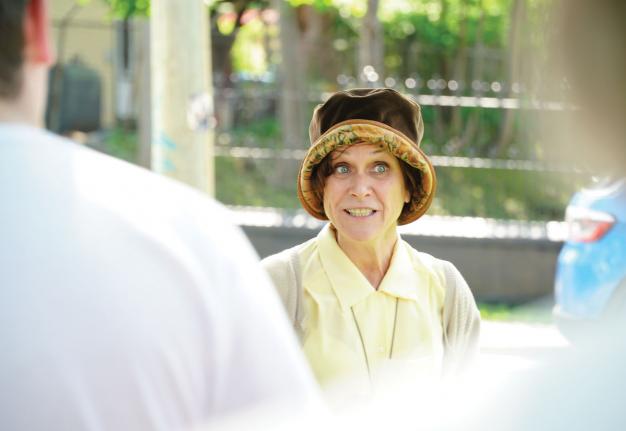 For just a few short weeks this summer, visitors to Bannerman Park in downtown St. John’s can step back in time and cross paths with figures from the past. Through August, the Other Women Walk will be giving a tour through an important period in Newfoundland and Labrador’s history.

In 1925, the women of Newfoundland (but not Labrador) gained the right to vote. It came after decades of battling and petitioning, of hard work and long hours fighting for their human rights. While people may know the names of some of these women, other names of people who made their marks in our history have almost been lost. Now in its second year, the Other Women Walk brings to life these figures and their struggles in the early 1920s.
Ruth Lawrence came up with the idea for a walking tour a few years ago. It emerged from research and the image of women marching to get rights. “Boots on the ground, I feel, are important today. When people talk about getting support for protests or to make changes and support, it’s great when people sign up online and give their support to petitions, but really it’s the actual showing up in person that has the biggest impact. And so that was a point I was trying to make - and I certainly make it at the end of the show, as well - to say, yes, some people talk, other people walk. And it’s the people who walk that actually make change,” Ruth says.
In the course of about an hour, participants learn the story of a household maid, a teacher, a barkeep, as well as suffragettes and labour organizers. And some of these women weren’t necessarily actively involved in the fight to gain women the vote. Some were more concerned with fairer wages, “and that was something that I thought was really important to vocalize, too, because I know people now who say the same thing, ‘Eh, you know, what different does the vote make? We can’t make any difference,’” says Ruth. And while suffrage had its supporters back in the day, there were also detractors, including women who said they wanted no part in politics and had other concerns. “So I thought it was important to incorporate that viewpoint, too.”
There was also a prominent class element to the suffrage movement. “That was one thing that I really noticed: that the women who had the time and the opportunity to do all that work, which I appreciate they did it because it led to my suffrage, they were privileged women. And we don’t really know about the ones who were underprivileged,” she says. The people who had to work long hours in factories couldn’t really take time from their day to attend rallies or frequent activist hubs like the Ladies’ Reading Room. However, the well-to-do women could afford to hire people to look after their children and their homes while they did the activist work.
Ruth’s interest with the suffragettes of Newfoundland and Lab-rador stretches back years, to when she was cast in Marian Frances White’s 1999 docudrama The Untold Story of the Suffragists of Newfoundland. From further research since then, it became apparent to Ruth that there was more to tell about this story. She was drawn to the voices of people who’d been glossed over and ignored by history. So Ruth and Sherry White started digging and found incredible resources, like the writings of Helen Fogwill Porter and Linda Cullum that detailed the lives of women in this period, particularly the marginalized folks such as serving girls and teachers. In contrast, “I tell the story from the trench,” Ruth laughs, who’s bringing history to life as a story in a way people can interact with. It all helped Ruth choose what characters would be featured in the Other Women Walk. Those characters are portrayed by a handful of actresses dressed in period appropriate clothing (some of them have multiple roles and must do a quick-change between stops).
All but one of the characters that walkers are introduced to are based on real, historical people, and the group is introduced to her early on in the walk: Mi-Lady Davidson, a sex worker. To create this character, Ruth took details from the time period and used Mi-Lady to talk about some of the charitable work done by the wealthy in town, but also contrasted it to the struggle of Mi-Lady’s own life.
Another woman you meet early on in the walk is Alice Warren, a housekeeper at the grand Winterholme, back when it was a private residence. As a servant, she was more concerned with poor working conditions than suffrage.
The walk is led by a barkeep named Helen Furey, who acts as the group’s guide and confidante. She’s the one who takes people around the park and doles out the inside-scoop of what was happening in the city at this time.

Raising Their Voices
In the past few years, there has been more interest shown by historians, writers and the public in examining the voices of those marginalized from the historical record. We know plenty about the deeds of men, but not so much anyone else.
“As I went through I thought, ‘Okay, let’s just see who was struggling at that time,’” Ruth says. For instance, there’s Josephine Colley. She was a teacher during a time when it was rare for women to become principals. Through her own ingenuity, Josephine was able to manoeuvre herself against the odds to rise up and become principal of a school.
It’s also helpful to remember these events didn’t happen all that long ago, and some of these people exist
in living memory. Guests of the tour who knew Josephine Colley have approached Ruth to tell her she’d accurately portrayed the educator.
One of the stories that Ruth really wanted to share was of immigrants in this province, but it was a challenge. She couldn’t find information about the first Chinese women who came over because there were so few. Struggling to find a way into that story, she learned of a group of Chinese immigrants who lived in downtown St. John’s, next door to an Irish woman. So Ruth wrote a song about a woman who fell in love with one of these Chinese men.

Taking a Walk with Other Women
By Ruth’s count, approximately 700 people turned up for the Other Women Walk last summer. In the first week or so, only a handful showed up, but those numbers swelled on subsequent tours as word of mouth and social media comments spread. The final show had 70 people drop by.
The overall response from last year was glowing, Ruth says. “The biggest compliment I got was from a couple people who referred to it as a human rights story, not just a women’s voting right. And I thought, that speaks so deeply to who I want to be as a writer, that I just carry that with me. I’m like, ‘Good, someone got it.’ That’s really what I was going for, it’s not just about women, but human rights,” she says.
“I often write about the underdog, I root for the underdog, and I like playing the underdog. So I guess in some ways it’s what really drew me to this story,” she says. “And also for an audience, it’s new, it’s fresh. They know that when they come to see the show there might be a name or two they’ll recognize, but they’re really going to walk away, I hope, hearing seven stories that are mostly fresh to them.”

For information and dates for the 2019 season of the Other Women Walk, visit Otherwomenwalk.com.