Why the Newfoundland Cycling Experience is Unique 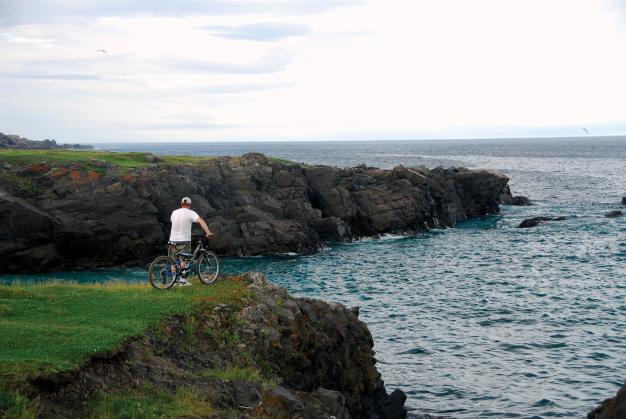 “The most important thing that keeps me here, really, is the coastal experience,” says avid mountain biker, trail builder, and owner of Freeride Mountain Sports bike shop in St. John's, Chris Jerrett.
“Especially one as rugged and as rough going as the coastline of Newfoundland, which is really conducive to mountain biking.”
The terrain is rocky, with a lot of hard roots. It’s technical mountain biking, the sort that presents a fun challenge for the experienced mountain biker on trails that, at times, run right along the coast.
“There’s not really many places anywhere else in North America where you can do that,” says Chris.
Mountain biking, and cycling in general, isn’t exactly popular in Newfoundland and Labrador. Given the excellent and abundant terrain, the lack of cycling popularity is somewhat perplexing. Then again, there aren’t that many mountain biking trails. But it’s not a problem unique to this province - bicycles just aren’t as popular on the east coast as they are on the west coast of North America, where mountain biking as we know it today has its roots.
And roots, in part, are what make the trails on the island of Newfoundland so good - tree roots, that is. Together with the rocky ground and uneven landscape, they make for
the sort of technical and challenging riding that really defines the Newfoundland mountain biking trail experience.
Although several communities have gravel trails that allow bicycles, including the cross-island T’Railway, these aren’t really proper mountain bike trails, which are also commonly referred to as singletrack (a trail wide enough for a single bicycle); think of the East Coast Trail, but for cyclists rather than hikers. In the St. John’s area, many of these trails are concentrated in two spots - White Hills and Pippy Park.
In White Hills, the trails range from Subnet, a technical and challenging trail with rolling terrain through the forest, to Oceanside, a more advanced, steeper and exposed trail that, at times, runs along the open coastline and has a greater elevation drop than Subnet. They’re the sort of trails made for full suspension bikes with plenty of travel - in other words, “all mountain” style bikes (see sidebar). Although a hardtail trail bike can be used on these trails, it’s not ideal.
Pippy Park, on the other hand, has a network of easier trails, with a mix of doubletrack and singletrack trails, all of which can be ably handled on a trail or cross-country bike. Although easier, these trails still offer a fun ride, and the overlapping, crisscrossing trail network allows you to mix up the route selection each time for a new riding experience.
Don Planchet, an employee at Canary Cycles in St. John’s, is also an avid cyclist with plenty of experience riding the local trails.
“It’s hard, but it’s fun,” he says of the St. John’s-area mountain bike trails. “But you have to have a certain skill level to ride real trails because it’s just so steep, and rocky, and technical. It’s nothing like the mainland,” he says, referring to the more difficult trails. “It’s constantly bang, bang, bang,” says Don, referring to the impact it can have on your body, “so full suspension or big tires, or full suspension with big tires, seems to help a lot.”

Head out on the Highway
It’s not all roots, rocks and trails for Newfoundland riders, though. Road cycling also offers something novel for the rider who prefers pavement.
“The most unique thing we have is our coastline,” says Don, “so any coastal road is what I call ‘real Newfoundland’ riding.”
Don pulls out a road map kept handy near the counter in Canary Cycles. It is folded to the eastern portion of the island, showing the Avalon and Bonavista peninsulas with several looping routes highlighted. It’s what shop staff direct people to whenever they ask about where to go road cycling. The Cape Shore, Irish Loop and Baccalieu Trail each make for a good cycling trip. Each can be done as a loop, so you’re never riding the same road twice.
“That whole perimeter of the Avalon is more distance than across the island, with a lot more scenery. So I always recommend people skip the central highway, rumble strip and trucks, and bang around the Avalon. It’s a lot more fun and scenic,” says Don.
Leaving from St. John’s, the Irish Loop round trip route is 320 km, says Don, and although he’s done it in a day, most people take two days to do the trip. It takes in such scenic outports as Witless Bay, Ferryland and Trepassey, while encircling the Avalon Wilderness Reserve. The roads don’t have a lot of shoulder - or any, in some places - but there also isn’t a whole lot of traffic to contend with, which is a pleasant switch for anyone used to riding in more populated areas or along major highways.
“If you drive an hour… anywhere out of town, you’d be surprised at how few cars there are,” says Don. “I was out last weekend and I saw five cars the whole time.”
Scenic rides with few cars on quiet roads in areas with sporadic cellphone coverage can be a glorious thing, but it also means riders should to be somewhat self-sufficient, cautions Don, who recommends bringing everything needed to change a flat tire. And because the roads can be a bit rough, making flat tires a distinct possibility, racing-style road bikes - with their stiff construction, lightweight materials and ultra skinny tires - aren’t the best choice.
“Getting flats isn’t fun, so we always recommend the heavier duty road bikes that have slightly bigger tires,” says Don. “And you can hit potholes and not break things, so they tend to be a little more rugged but better suited for multi-purpose use.”
Off the Avalon, Don recommends the Bonavista Peninsula; in particular, Route 235, which hugs the coast in several places and is a visual feast. It is, says Don, a beautiful stretch of road with lots of hills.
The Bonavista Peninsula is also the site of the BonRexton, a 133-km Gran Fondo style (long-distance) group ride happening September 7.
With all this talk of narrow roads, long distances and less than perfect road conditions, one may think these routes are only for the experienced rider. But really, anyone can do these rides - the only difference is how fast the route will be completed, says Don. He’s being encouraging, sure, but he’s also seen people of all ages and abilities do these rides. About 150 of those riders stop by the shop every season after having completed one of the longest rides - clear across Canada.
“Anyone can do it,” says Don. “We’re the end of the line for coming across Canada, so we’re seeing every type of cyclist. And there’s a lot more older, retired people now.”

For more information on the mountain bike trails mentioned here, go to www.trailforks.com and search for “Pippy Park” or “White Hills.”