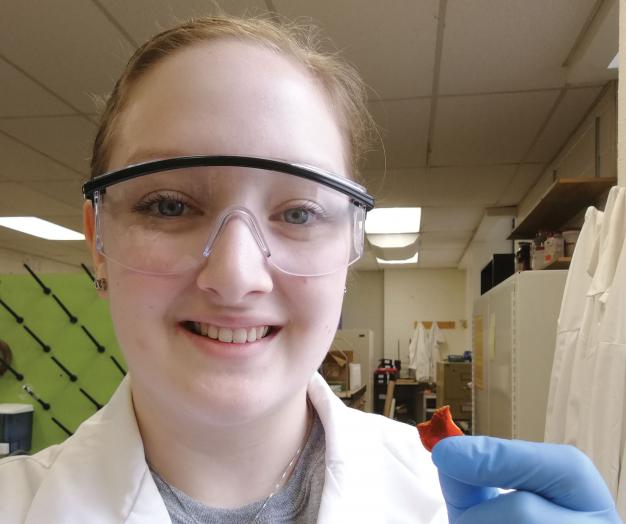 In a pair of blue-gloved hands rests a dark, shiny, almost translucent piece of red plastic.
It’s the end result of more than a year of work on the part of Courtney Laprise, a master’s student in chemistry at Memorial University. While this is plastic, it wasn’t made from petroleum and you won’t find anything made with it in stores yet. Using oil extracted from fish heads and intestines (ordinarily disposed of as waste), Courtney was able to create a plastic that could be the future of eco-friendly plastics.
“In Newfoundland the aquaculture industry has a lot of waste that they produce, so they kinda have this need to get rid of this waste and use it for something,” Courtney explains. “And my supervisors were talking to people in the aquaculture industry, and I wanted to come up with a project to use it.” There’s already been research into alternative uses for fish waste, including fish leather, skin cream and fertilizer.
Moreover, alternative substances have already been used to create plastic and oil-substitutes, including soybean oils and corn. But, Courtney points out, those methods often rely on using food that would normally have been consumed. “That’s the big problem with the ones that are based off of crops: you require large land space in order to grow the crops and that space could be used for food production instead, so it’s not good for the environment,” she says.
Instead, her research relies on fish waste, and for Courtney it’s an important distinction because she’s using parts that were never going to be eaten from fish that had already been caught. “It’s from a waste material and we’re not killing fish,” she says, “because that’s been the big problem so far.”
Newfoundland and Labrador is probably the ideal place for researching fish waste recycling. As fishing is still an important industry here, there’s plenty of fish waste to go around, so the material doesn’t have to be shipped far to get to the lab.
“Aquaculture is just increasing in Newfoundland, it’s becoming a pretty large industry, and one of the problems as they increase their production is they’re gonna see more and more waste being produced. So, in theory, you could have your plant right next door to where the fish is being processed, take the waste, extract the oil and then from your oil you can make your materials right there,” she says.

Getting Lab Results
This research, part of Courtney’s master program, took plenty of trial and error to create a successful piece of plastic. In fact, she was finally able to synthesize it just this past January. “So it took me a full year and a couple months to get it, but now I have everything optimized,” she says.
“It was extremely exciting because ... when you go into your degree you hope you get some good results… So when I came back after Christmas I was starting to get a little sad, you know, maybe this won’t work; nothing’s worked so far. And then I tried it one more time and it worked!
And it was a nice, plasticy material. I was ecstatic and so happy I ran down the hallway screaming,” Courtney laughs, remembering that first moment of success.
The exact process is still a closely guarded secret and she can’t disclose how she created the plastic. What she can say is that it’s basically from fish oil derived from waste materials.
“So it’s like the waste left after the processing of the fish. So we’re taking the oil from that… And then I take that oil and I process it through a few steps, and then in the final step I cure it with a plant-based curing agent to make the final material,”
she says.
With Courtney’s graduation right around the corner, she’s busy finishing up her master’s this summer. She hopes that even after she’s left the lab, her research will be continued by new people.
“Right now, we’re looking at finding industry partners to help us do some of the research because we don’t have a lot of the instrumentation that’s required to characterize my material. And then, because I’m leaving, we need another graduate student to come in and pick up the project from where I left off. And hopefully that happens and someone can keep working on it.”
There are also more research avenues to pursue for future scientists. This plastic is supposed to be a green material, so it should be able to biodegrade on its own, not just sit in landfills for a century after it’s been thrown away. Courtney explains, “So we’re doing a bunch of experiments to figure out how it would degrade and if it would degrade.”
She adds, “There’s still a lot of research left to be done with it, but it is very promising.”
As for Courtney, she’s not going too far; this fall she’ll start on an education degree in order to become a high school chemistry teacher.