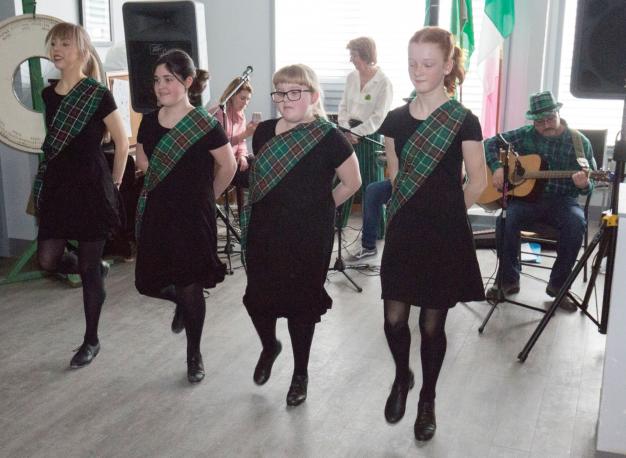 For almost a century, the St. Pat’s Dancers have pranced their way across the stages of Newfoundland and Labrador, delighting audiences, raising funds for charity and recruiting new members. Yvonne Steiner is a coordinator with the non-profit group and has been involved for more than 30 years, taking over when the Christian Brothers moved out of St. Patrick’s Hall School on Merrymeeting Road in St. John’s. Today, they practice out of St. Bonaventure’s College.
To raise funds, they hold events and performances. In fact, last year they were hired by O’Reilly’s Pub on George Street in St. John’s to perform there every Thursday, Friday and Saturday evening.
Not only are the dancers, teachers and organizers all volunteers, there is no cost to parents whose kids want to be St. Pat’s Dancers. “All the money that is given [raised] goes into a bank account for the children, for their travel, for their shoes and for their uniforms if needed. So it won’t be any cost to the parents,” Yvonne confirms. She enrolled her own daughters decades ago - that’s how she got involved - and one of her daughters still volunteers alongside her.

Tracing the History of the St. Pat’s Dancers

The St. Pat’s Dancers were founded in the 1930s by the Irish Christian Brothers. It started as a group of five boys who were taught Irish step dancing and performed around the city. From the 1940s to the 1980s, they got an inspirational boost from Brother Murphy, who’d returned from New York City, where he was influenced by local dancing styles and studied with Ginger Rogers and Fred Astaire. He introduced these new dances to the St. Pat’s Dancers, which was still an all-boys group. That changed in the 1980s, when the floor was opened for girls. Females make up the majority of St. Pat’s Dancers today.
Currently, there are 14 dances that members learn and perform. Dancers are divided into two groups: junior and senior. On Friday evenings, as many as 50 people show up for the junior class, led by more experienced dancers. “That’s how we carry on the tradition,” Yvonne explains. “And we’ve got kids at Memorial University, several of them actually, who joined when they were five and six years old, like my daughter, and they still stay with it. And they come back on a regular basis and teach the younger ones on the tradition. Children teaching children.”
Getting the dancers to teach the younger members is a good way to keep them connected to the group and stay with it, rather than just age out. They’re also helping produce well-rounded students, many of whom go on to earn the Duke of Edinburgh’s Award and volunteer with other groups. Plus, Yvonne says, “The kids have a lot of fun at it!”
In the past, St. Pat’s Dancers would visit and perform at long-term care homes in the city, such as St. Patrick’s Mercy Home (where they also practise one night a week) and they’ve expanded into venues across the Avalon Peninsula. They’ve even performed for royalty, including the Belgian king and queen in the 1970s when they visited NL. In 2014, the St. Pat’s Dancers were in Ireland and performed at the Canada Day celebrations at the embassy in Dublin. “We’re all over the place; put it that way,” Yvonne says.

Whenever they can, Yvonne says the group travels and last August, a St. Pat’s Dancers troupe travelled to Ireland again. That trip’s origin started with Causeway Delight, a musical group from Ireland who was visiting the province and met the dancers. The musicians said on their next trip to Ireland, they should visit Killarney, “so that’s what we did,” Yvonne says. The dancers took the opportunity to learn more dances at the Maureen Haggerty School of Dance in Killarney. They also performed at a few venues and met up with Causeway Delight.
It was a family-friendly trip, in that some parents came along, too. The dancers had free time to explore
the area, and some rented bicycles to ride around town.
“It wasn’t all dance, dance, dance, dance,” Yvonne says.
During this visit, Yvonne says she was told by people that the St. Pat’s Dancers were doing Irish dancing that’s forgotten there. “I think that’s why we go over so well,” though she isn’t sure that Irish dancing has actu-ally fallen by the wayside in Ireland. But the St. Pat’s Dancers are certainly doing their part to preserve and build on this type of traditional Irish dance.
The 2018 trip to Killarney went over so well, the St. Pat’s Dancers hope to be in Galway in 2020. All the while, they’re keeping the group going strong, performing in the community and reaching out to new members. “I love it,” Yvonne says. “I never get sick of it and I’m at it over 30 years.”