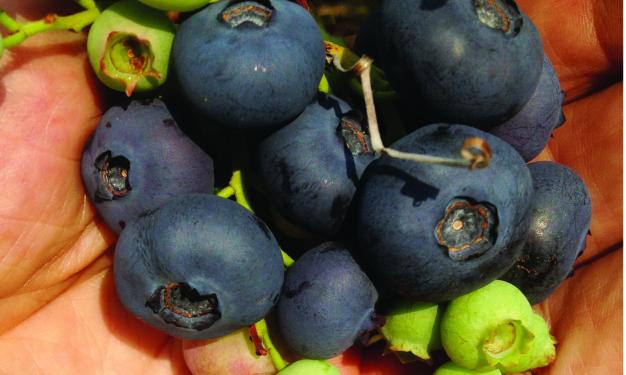 For Philip Thornley, seeing a child get into the blueberry bushes and emerge with a face stained purple is a joyful thing. Understandable, since he’s the owner of Campbellton Berry Farm in Campbellton, NL. Located in the Bay of Exploits, it’s the perfect spot for a berry farm.
“It’s a nice little peninsula because the climate, to some extent, is moderated by the bay. So frosts aren’t as bad as they could be inland,” Philip explains. A farmer for several decades, Philip has to keep an eye on what may have a negative impact on his fields.
While Philip’s farm is best known for its strawberry u-pick, he’s also been harvesting blueberries for the last 25 years. According to Agriculture and Agri-Food Canada researchers, out of all the fruit Canada exports, blueberries are the most valuable and in 2016, those exports were valued at more than $223 million.
Our country is the second largest producer of blueberries, and in 2017, Newfoundland and Labrador produced approximately 115 tons of them. The health benefits of this little berry are well-documented: they’re rich in antioxidants and eating this fruit regularly has been linked to a reduced risk of cardiovascular disease and diabetes. They’re also high in nutrients, such as vitamin C, vitamin B6, folate, potassium, manganese and copper.
And these berries can be found growing wild all over NL, so it’s little wonder these small, but powerful berries are so popular. The blueberries in this province are typically lowbush blueberries, which are noticeably more nutritious than the highbush variety, do better in cooler climates, tend to be smaller and have a better flavour. Philip’s farm has both varieties.

While Newfoundlanders and Labradorians don’t always love our climate (lookin’ at you, late April ice shower), our generally cooler climate has benefits when it comes to blueberries. It’s produced a hardier berry that can withstand our temperatures, as well as a better flavour, according to Philip. A lot of antioxidants are in the berry’s skin, he says, and the smaller blueberries have a higher skin-to-flesh ratio, making them packed with these beneficial antioxidants.
As well, where there’s lower soil fertility, the blueberry plant has to get resourceful when it comes to finding its nutrients. It can partner with mycorrhiza (a symbiotic relationship between fungus and the plant’s root system) to meet its needs, such as water, phosphorous and potassium. “So having a plant that has to struggle a bit, like Newfoundlanders or the Newfoundland pony… can end up being a better breed,” he says.
It’s like a type of survival of the fittest. Our local blueberry bushes are the descendants of plants that have had to struggle to survive, so they’ve adapted to make themselves comfortable in this environment. “Plants are smart; they’ll adapt if we have the patience to give them the time,” Philip muses.
While small berries aren’t always stocked in supermarkets because consumers are more visually drawn to plumper berries, Philip says bigger blueberries can mean higher water content and fewer nutrients. He would also like to see a shift in the way people buy their berries. “Instead of thinking about size and appearance, people who are stocking supermarket shelves should be thinking about nutrition and the consumer should be thinking... ‘When I spend my dollar, am I getting good value for vitamin C, for example, or nutrient value and taste?’”

The creeping threat of climate change

There are plenty of threats to crops, and after 40 years on the farm, Philip’s seen climate change creeping up faster than he’d anticipated. He knows it’s going to be a major problem. In fact, a recent report from Environment and Climate Change Canada stated that Canada is experiencing climate change at twice the speed of the global average. “And it might have some unexpected consequences for Newfoundland because we’re on Iceberg Alley,” Philip says. “And if the Greenland ice sheet is really shedding ice water, it’s gonna shed it into Newfoundland, right on our northeast coast. That’s gonna result in colder temperatures, especially in the spring.”
There are also severe economic impacts that come with climate change, which will be felt especially by those who work the land. If a crop is destroyed, that can put a farmer’s finances in jeopardy, “which is what happened last year,” Philip says. “And it’s not just gonna be predictable change, it’s gonna be extremes. Plants are quite happy with averages, but they’re not happy with extremes - that’s what kills them.” So you can have a nice spring, but if the temperature suddenly soars or plummets, it can kill the plant.
Philip says there are things a farmer can prepare for, but even then he can still get hit with something unexpected. For instance, farmers monitor and manage the content of the soil to make sure there’s the right levels of certain elements, such as nitrogen, phosphorous and potassium. But if something fails that’s out of his control (like temperature, sunlight or rainfall), he can still get a bad yield, Philip explains.
“So you can do everything right, or you think you’ve done it right, and you’re nailed by something that’s unpredictable. So yes, [climate change is] going to have economic consequences. It means we’ve got to take more measures to try and protect crops or we’ve got to grow crops that are way less vulnerable, and that’s all expensive.”
Blueberries have vulnerabilities, Philip says. For instance, the plant might survive a severe frost, but the blossoms won’t. Blueberry bushes are self-pollinating, but cross-pollination is good for the plant, so they still need bees and a breeze. But what if it gets too cold and wet for pollinators to get around? Or maybe the fruit never develops because it got too hot and dry? This isn’t great for farmers who are selling the fruit the plant bears.
It’s not just weather that threatens blueberries, but also the potential disease that could hit them, such as mummy berry, a disease caused by a fungus that can wipe out crops and can linger in the area for years. The fact that Newfoundland is an island can offer some degree of separation and protection from certain problems, including fruit fly. However, they can still infect Newfoundland blueberries if the insects are blown over the Gulf of St. Lawrence or brought in accidentally.
Last year there was a recall for blueberry bushes being sold in NL that potentially contained blueberry maggot, a species of tephritid fruit fly. It’s an insect that eats the plants and can already be found in the eastern United States, Ontario, New Brunswick and Nova Scotia, but not Newfoundland and Labrador - at least, not yet.