The Humpback (whale) of Holyrood 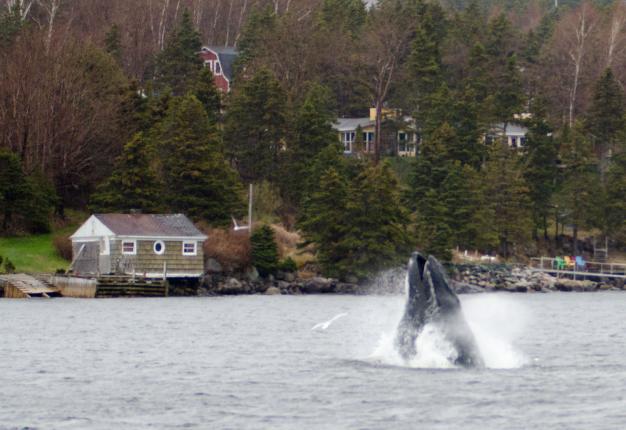 Photos of a humpback whale in Holyrood’s north arm have been all over social media for the past few weeks, and people have been lining up on the side of the road to catch a glimpse of the early-season visitor. While whales in Holyrood aren’t especially uncommon - there’s usually a few each year - having one stick around for this long is unusual.
Naturally, we got curious about the whale’s activity, so we reached out to the federal Department of Fisheries to speak with whale expert Dr. Jack Lawson, a research scientist in the marine mammal section.

The assumption that it’s the same whale coming back time and again, rather than multiple whales, comes from seeing only one at a time. But with a bit of observation, it need not be purely a guess. Jack says there are several ways to identify a whale, including noting any scars or nicks in the dorsal fin area, identifying unique markings on the mouth area, or by noting the pattern on the fluke. Using the fluke is the preferred whale identification method, he says - each one is unique.
The fluke identification method has proven difficult in Holyrood, though, since the whale very rarely shows its fluke. The water in the lower part of North Arm gets pretty shallow - parts are exposed at low tide - so maybe that’s why the whale doesn’t show its fluke. Or maybe it’s shy, but that’s probably not it.

Being able to identify a whale comes in handy if you want to know where the whale goes next, or if you want to know if he returns to the area each year. By noting unique characteristics, it’s possible to keep an eye out for various whales.
“This animal, there are quite a few pictures of the mouth because it’s feeding and has its head out of the water,” says Jack. “There are a couple of nice markings on the mouth that would work as well if you were able to see the mouth in the future.”

The small bay where the whale spends much of its time feeding is relatively shallow, ranging from 6 feet where a creek feeds into the end of the bay deepening to about  16 feet then 32 feet, according to online nautical charts. The average adult humpback ranges in size from about 42 to 52 feet long, so there isn’t really room for the whale to do a deep dive in the bay, which could explain the lack of tail displays.

But there is enough room for the whale to lunge feed, which is when a whale’s mouth comes out of the water as it gulps up fish. One evening, the whale was observed doing this lunge feeding motion in the shallower water, then swimming out to deeper water before returning for another gulp of food. Was he using the bay to corral the fish?
“Often these whales are smart enough to do that,” says Jack, telling of times when humpbacks have been observed using shore rocks or finger piers to corral the fish, making it easier to gulp up large mouthfuls.

The waters off Newfoundland and Labrador are like a cold water buffet for whales, with plenty of food. And that food is the main reason they are here. “For these guys,” says Jack, “this is the time of year when they really bulk up on fat. So as long as there’s food around, they’ll generally stay in an area. I haven’t seen whales move away from an area where I knew there was a lot of capelin or a lot of herring."