Co-housing: A Popular Trend That Contributes to Aging Well 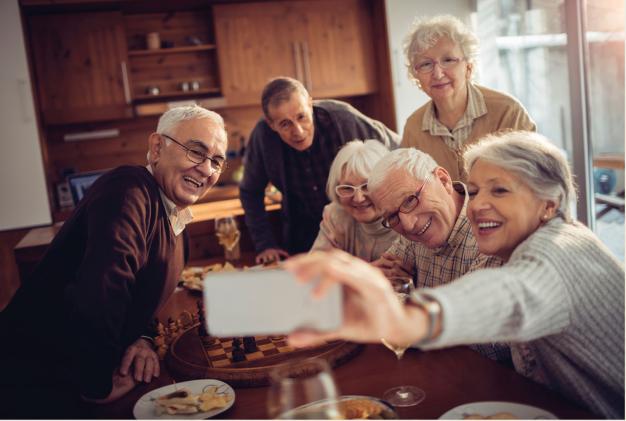 Co-housing: aging in place, aging together. This trend that originated in Denmark is gaining popularity around the world. More and more seniors are in platonic co-habitating arrangements, living together to save on costs and stave off loneliness. To me, it makes a lot of sense, but it’s not to be entered into lightly - rather like marriage. It takes commitment and a lot of work each and every day.
Communication and compromise are the glue that keeps a relationship intact and going along in a healthy, constructive and productive way. That’s why co-housing makes sense, especially for lifelong friends who believe they’d do better with each other than on their own. Together, they have a better chance of not becoming nursing home statistics. Government, take heed. Real estate developers and builders, listen up. We need to rethink where and how our seniors live.
When we lose the supports of the traditional family dynamic, through death or family members moving far away, we begin to feel the stress that those changes impose upon our daily lives. Our physical and emotional health often takes a hit, and we experience one or more health situations that may not exist were we not on our own. A viable solution is to share the new reality with others, whether a close friend or someone interviewed through the process of finding a housemate or two or even three.
Co-housing also means sharing the bills and the responsibilities of the house, going beyond practical financial arrangements. It’s cheaper to live with somebody else, while at the same time contributing to each other’s physical and emotional wellness. Sharing and caring together enhances quality of life and puts off an often inevitable transition into a nursing home or assisted living care.
Provinces across the country need co-housing, as people currently aging in place are often alone in sprawling homes that are becoming more difficult to maintain. They would be far better served sharing with a longtime friend in a similar situation. The financial health of the province’s systems of care would also improve by being less burdened with cases of single seniors struggling to manage.
Co-housing combines the best features of home ownership with the added layers of security, companionship and community spaces in buildings that are on the “campus,” within walking distance. Imagine movie nights and potluck suppers in the community lounge, then returning to your private home with your housemate. You own it. It’s yours. Having places to go and people to see is far better than any anti-anxiety medication or sleeping pill. The possibilities for a long term “people prescription” are endless.
I believe that real estate developers would do well to embrace the idea of co-operative housing units, which include all the features critical to safety. Invaluable would be consultations with persons with challenges to daily living who know, based on life experience, what would be needed in a home for seniors who want to age in place. Ask me about kitchens.
The cost of purchasing a property in a senior co-housing community is comparable to buying a house in a traditional community; and buying a home in a newer development, and downsizing, can reduce maintenance and overhead costs such as utility bills. Furthermore, some senior
co-housing communities encourage neighbours to share resources such as lawn maintenance equipment. What a great way to meet-and-greet.
Lots of communities, especially those designated as “university towns,” are well suited to multi-generational co-housing. Friendships across generations are critical to emotional health and wellness - ask any senior with grandchildren.
Co-housing with age-related peers and multi-generational co-housing both contribute to improved physical health and reduce the number of seniors living in poverty. In my view, co-housing is necessary for survival, particularly for those at-risk populations who would benefit from a sustained people connection. To learn more, visit Canada Co-housing Network (www.cohousing.ca).
For myself, if I were fortunate enough to match with a compatible housemate, I’d certainly be amenable to opening the doors of Chez Rockwell to a roomie. Must love dogs!


Carla MacInnis Rockwell is a freelance writer and disability rights advocate living outside Fredericton, NB with her aging Australian silky terrier and a rambunctious Maltese. carmacrockwell@xplornet.ca