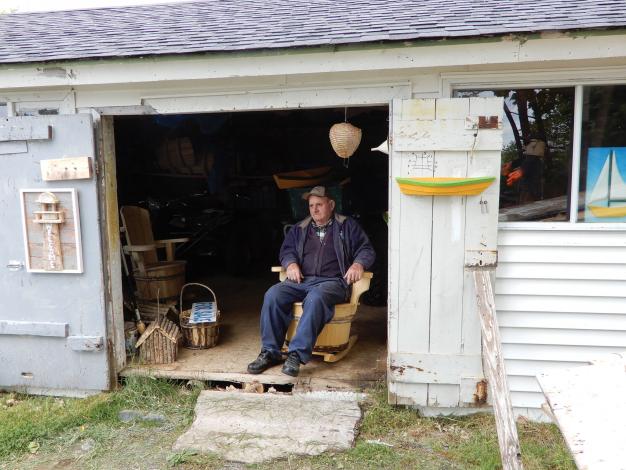 Some work, all play is the Newfoundland and Labrador way

In Newfoundland and Labrador, a shed is at once a giant toolbox and a cozy shack. Here friends, family and neighbours come to get this doodad or that whatnot for their latest projects - especially when the local hardware store is closed (if there is one). Other times, people pop in to lend a hand with your latest project - mending a net, piecing together a lobster pot, framing a boat, crafting a model lighthouse. If it’s your shed, then you’re likely to crack a beer or two in return for the help. As work dovetails into play, the shed reaches its maximum potential, morphing from just a shed into a downhome shed party.
This is a common experience for fourth-generation fisherman Lee Tremblett, a 42-year-old whose shed-to-house ratio is enviable. Any self-respecting Newfoundlander and Labradorian might make do with a standard one-to-one ratio, but Lee boasts three sheds to his one house in Bonavista. His primary shed is the affixed garage to his bungalow-style home. “My shed’s bigger than my house, and this house isn’t small,” Lee says, chuckling.
This is the space where he sews mackerel nets, stretches out and mends gillnets, assembles lobster pots and takes many other preparatory steps required for his work as an inshore fisherman. On the weekends, though, this shed quickly segues from a working space to a socializing one. “If I have a few people over, we’ll be in the house at first or on the patio,” Lee says. “But then, eventually, it always ends up being spilled over to the shed. I’ll have the stereo going and there’s a little fridge there, so we’ll have a few beers.”
Shed culture - it’s a thing here. And locals take it seriously. So seriously, in fact, several communities host festivals prominently featuring shed party events, including the evening shed crawl of the Feile Tilting Festival on Fogo Island, and the Summer Mummer Shed Crawl in Burlington. At least one local radio station hosts a weekly show named after the shed party, taking song requests from folks partying in their own sheds; and there are Facebook groups dedicated to the sub-culture. The Newfie Shed Party group has almost 23,000 members.
This outbuilding obsession has even influenced Parliament Hill, where last year’s second annual Newfoundland Shed Party made headlines when Prime Minister Justin Trudeau reportedly outdid the actual Newfoundlanders in the room singing Great Big Sea’s “Rant and Roar.”
Sheds are semi-outdoor spaces perfect for casual, laidback entertainment. Beyond having a drink, they are places to play cards, shoot darts and listen to a live local band, all while leaving your boots on and possibly firing up the barbecue. And party clean-up is a breeze. The place is often a mess to begin, so why even bother? The clutter is nothing to be ashamed about - it’s the hallmark of a true workspace: sawdust, nuts, bolts, whatever.
It’s also in the mess where the stories live. Items beg to be handled and questioned “What’s this?” On the shelves in Lee’s garage, for example, are the usual clamps, jiggers, reels, twine and tools, but there are also three sets of antlers (deer, moose and caribou), two model wooden boats (a schooner and sailboat), an old red kerosene lamp and metal tins (Premium Plus crackers and Robin Hood flour), a wooden cross marked “Jesus Saves” and a pair of Minke whale ribs.
“Those bones come from a shed out in Robert’s Arm,” Lee says, telling me  how he helped clean up a shed slated to be torn down, its contents taken to the local dump. “I couldn’t see them disappear to a landfill.”
Next door, Lee has a fishing store, once belonging to his grandfather. It’s filled to the brim with four generations of fishing supplies, furniture and tools. Over the years, the space has evolved from a saltbox house to a horse-barn (an old horseshoe is still visible under thick layers of white paint) to its present-day fishing store. The second floor of the shed was partially levelled, creating a loft. Some might have called it a twine loft, only there’s no room for mending nets there now with the gear that’s jammed in from floorboard to ceiling rafter.
More recently, Lee purchased a third shed, across the road from his house, where he stores his ATV and snowmobile.
“The original shed, that was my grandfather’s and that’s just a store now,” Lee says, laying out how he uses each of his three sheds. “And then the one I’m working out of now [the garage], that’s the main one. Then, the new one now is a lot cleaner - it’s just I haven’t got generations of junk in there yet.”

From Shed to Store to Stage 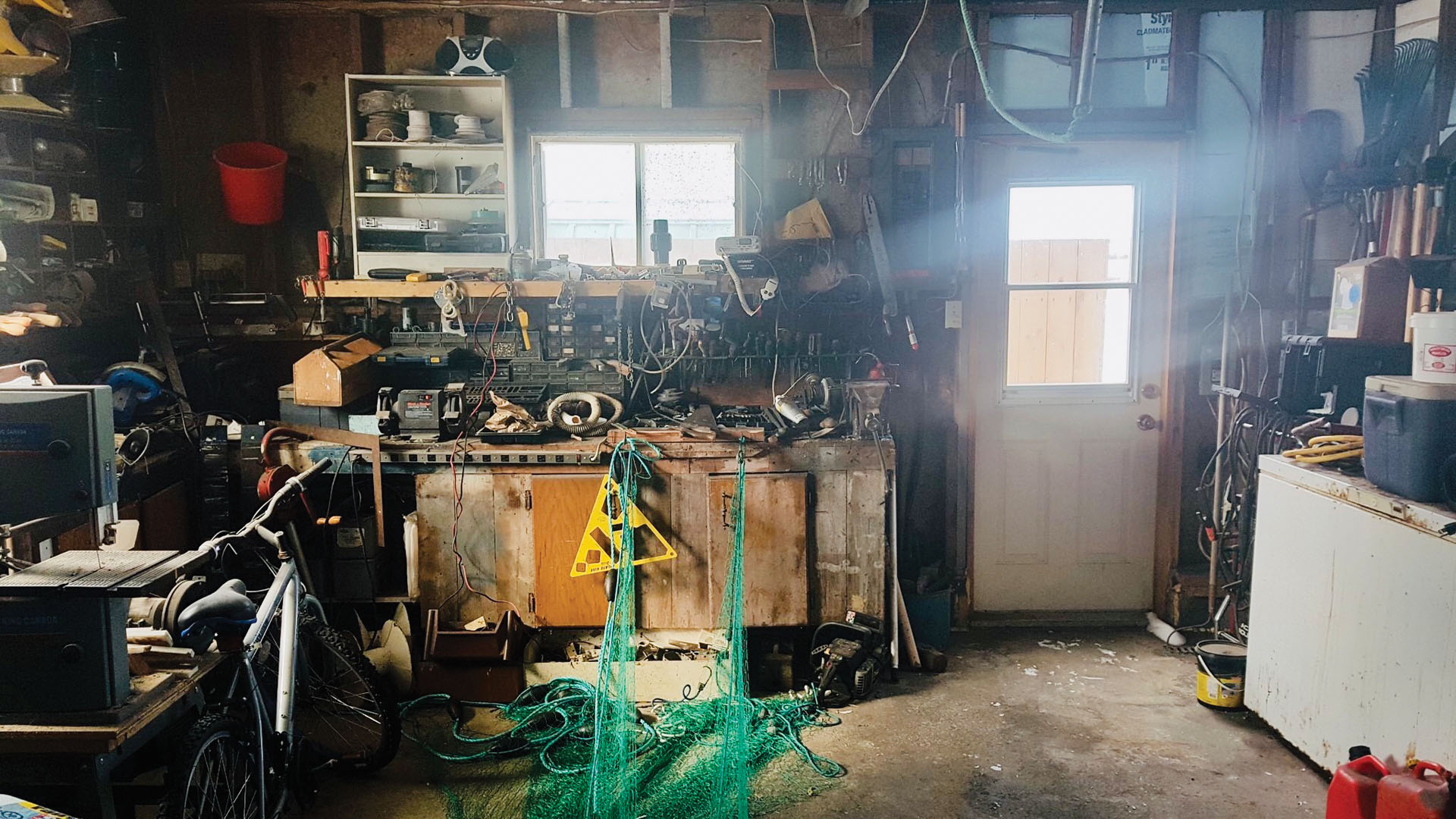 Store is another word for shed - as in a place to store your belongings or gear. Stage is another popular term, reserved for a shed on a wharf, where fish was traditionally offloaded and processed.
In the community of Bay Bulls on the Avalon Peninsula, I’m standing near the location of one such fisherman’s stage. Here we have the old fishing premises of fifth-generation fisherman turned boat-builder Eugene (Gene) Maloney. The 87-year-old took an early retirement from the fishery when the government put a moratorium on northern cod on July 2, 1992. His fishing premises now houses Captain Wayne’s Marine Excursions, his son’s whale and bird watching tour boat company.
“I had flakes over there, had one, two, three flakes,” Gene says, pointing in the general vicinity from one of his sheds, next to his house, south and up over the hill above the harbour. “And boy, we had wire flakes everywhere because we had fish on them over and over. We’d come in with a load of fish, and then the kids would cut out the tongues and tend the tables.”
The excitement of those days is palpable in Gene’s words, but the struggles are equally present. As we talk about the days following the cod moratorium, Gene pauses, holds his breath and presses his eyelids for a slow blink, as if to let his heart break another time. Those were the days when his livelihood was yanked out from under him. All your pride, all your life, everything you’ve ever known until one day you’re asked to stay off the water, he says. For Gene, his shed became all the more important as the site of his next career - boat-building.
Like Lee, Gene boasts three sheds. Two are side-by-side on top of the hill, while the other is at the base of the hill, beside the driveway. His house is nestled partway up the hill on the land in between. I’m inside one of the sheds on top of the hill and the smell of sawdust overwhelms. There are piles of the stuff - the
latest lot from Gene’s 72nd boat. Over 60 years, Gene has built every kind of wooden boat there is: dories, rowboats, speedboats, skiffs and longliners.
The tools of Gene’s trade are everywhere: saws, levels, rulers, among various bits and pieces hanging on the walls and the windowsills and anywhere there’s space. In the rafters is wood, some new from the hardware store, some scrap that will be put to good use eventually. Nothing goes to waste here - and that’s another part of shed culture. Everything - even the oldest, out-of-date looking things - can have a renewed purpose if stored in a Newfoundland and Labrador shed. If it’s not immediately obvious what the purpose of a found object is, then chances are you simply haven’t had it long enough to figure it out.
Meanwhile, over in the far side of Gene’s shed is a woodstove with a metal wall behind it, serving as something of a running diary board. There, he has scrawled in black marker what looks to be hundreds of dates, weather and otherwise noteworthy special events. Some of the entries read: “STORM BIG SEA DEC 21 RAIN WIND 100K,” “XMAS DAY 2010 RAIN 10CM,” “FIRST BOAT IN 2012 JAN 29.”
There’s a collection of news clippings, too. One features stages and fishing boats of fishermen in the area before wind lifted the structures into the harbour and ice crushed the rest in a particularly bad storm on February 3, 1987.
The place certainly has character and as if to prove it, outside we find Joe the seagull. “I’ve had a seagull for 28 years,” Gene says. Joe is just the latest one, having showed up a couple of years ago. “All last winter, he was there on the roof of the shed, and I was working away, and I fed him every morning. I fed him this morning - gave him some scraps and whatever I had. He’ll stay now until coming on dark. He’ll be there tomorrow morning at dawn.”
There’s a deep joy in these sheds, where the idea of “all work and no play” is flipped on its head - around here, it’s some work and all play. So, call up your family and friends, and get to a shed nearest you. The real Newfoundland and Labrador awaits.