Inside Newfoundland and Labrador's Film and TV Industry 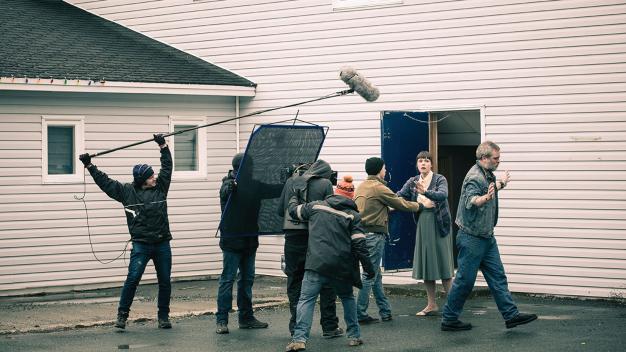 The scene looks like it could be inside any police headquarters: a woman is thanking a detective and his partner, Rex. She crouches down to look Rex in the eye to give a heartfelt thanks. Rex is not his real name; it’s Diesel vom Burgimwald. He’s an actor. Oh, and he’s a dog.
It’s early March and I’m on the set of “Hudson & Rex,” a new TV show that’s set to debut in a few short weeks on Citytv. Thanks to great set design, what looks like an office is actually inside a warehouse on a quiet road in Mount Pearl, where much of the show is being filmed. Filming started back in October and continues almost up until airtime.
“Hudson & Rex” is the story of Detective Charlie Hudson (played by John Reardon) and Rex the police dog teaming up to solve crimes in the city of St. John’s, NL. It premiered in Canada on March 25, but its real debut was in Austria in 1994, where it aired as “Kommissar Rex.”
“We are the English debut, so that’s what we’re pretty excited about,” says Paul Pope of Pope Productions, who’s co-producing the show with Shaftesbury Films in Toronto.
On the day I visited the “Hudson & Rex” set, Paul estimated there were about 90 people working there. They were from the camera department, sound department, lighting, grips, make-up, hair and wardrobe, sets and props, a full dog team, the transportation department that moves people around, as well as the actors.
Those are just the departments working on set that day. Paul says they also have a production office filled with staff and there’s always prep work being done somewhere. “We’re doing 16 episodes, so we shoot in blocks. There’s always two in production and two being prepped,” Paul says. Plus, there are people in the accounting and writing departments, as well as their other building in Mount Pearl where all the sets are constructed.
After filming, the post-production work brings in another flood of contributors, such as editors, music composers and dialogue editors. All in all, Paul says there are approx-imately 200 people working on “Hudson & Rex.”
When I finally meet the show’s co-star, Diesel (Rex), it’s already been a long day for the newbie actor. This is his first acting job, as he comes from a show dog background. So he tolerates my scratches, probably pretty used to the adoration of fans, and soon lies down on the floor like a good dog. 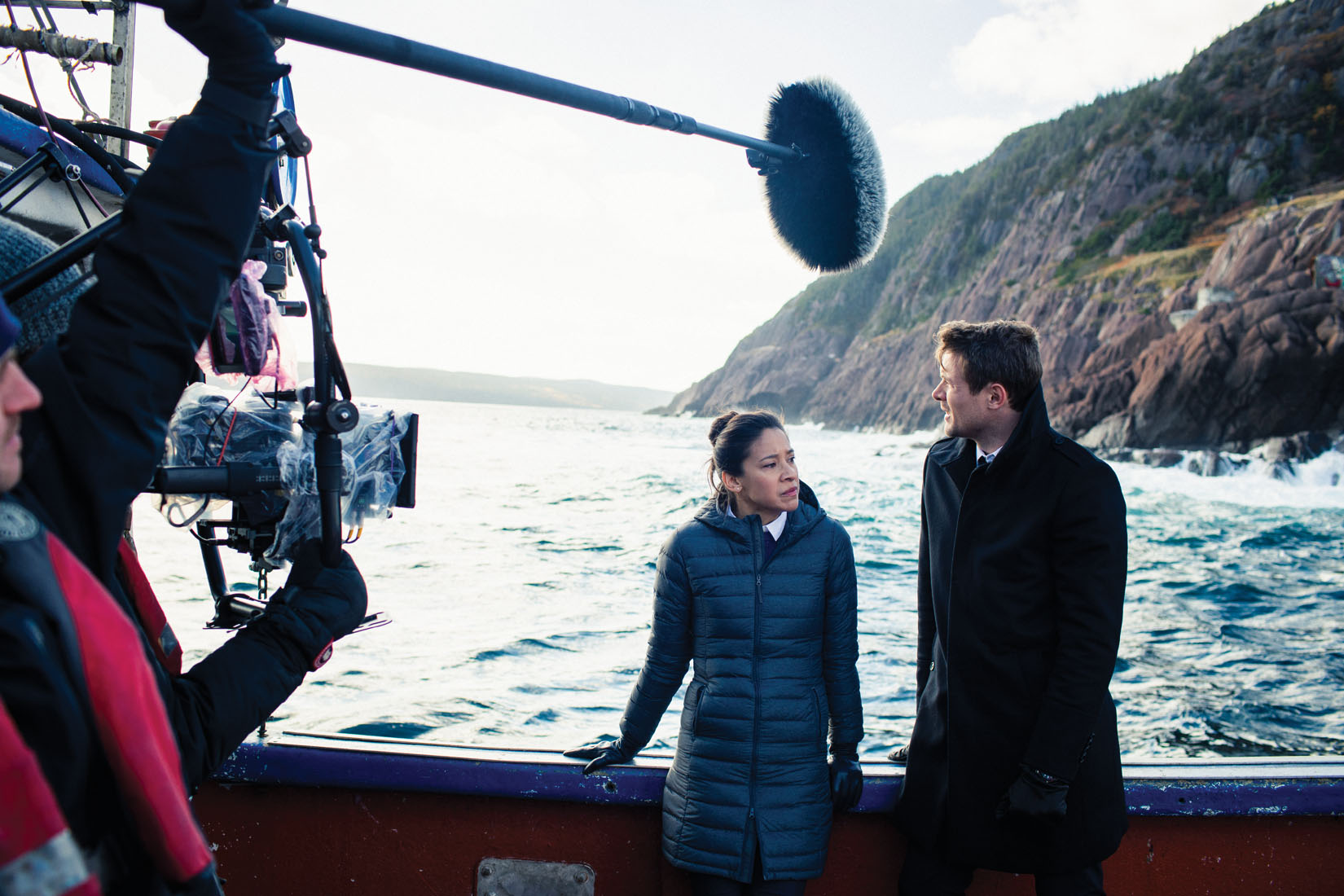 Big economic role
The film and TV industry gives work to a highly skilled and young workforce, says Paul, and locally made productions like “Rex,” with a global audience, help promote Newfoundland and Labrador. “This show has already been sold in a lot of Europe… We’re talking mostly non-English markets to date,” Paul says. “They’re gonna see St. John’s for the first time.”
That attention can turn into new revenue for the province. As executive director and film commissioner of the Newfoundland and Labrador Film Development Corporation (NLFDC), Dorian Rowe is primarily focused on the economic benefits when it comes to film production. One of the crown corporation’s main roles is to make investments in local productions, mostly through tax credits and the equity investment program. There are also professional development and sponsorships programs.
“If the province invests a dollar in the film incentive, the result is that in terms of [money] spent here on film and television, four dollars come back. So that’s new money in the local economy… the money that’s used to invest in film and television and production,” Dorian explains.
There are workers, such as crew, who are directly employed by the industry. But there are also those who are more tangentially benefiting from filming activities, like a car rental agency or a hardware store where lumber and materials are  bought to build a set.
Through his own experience as an actor travelling for work, Kevin Hanchard (who plays Superintendent Joseph Donovan in “Hudson & Rex”) has noticed the benefits that follow when a television production sets up shop in a town. “The number of hotel rooms we book, the number of bed and breakfasts that we use, the locations we have to pay people for to use, the number of taxis; it’s huge, it’s massive,” Kevin says. “So it’s really a boom to any town, any city, any area that you come into.”
Dorian says this summer NLFDC will reach a milestone since the corporation was founded back in 1997. “We’re going to surpass the $500-million mark in terms of total production activity since the corporation was started. So that would be about 6,000 full-time employment equivalencies over that whole time. To me, that’s a mega-project right there. That’s a big deal.”
He also notes that what’s made this province’s industry pretty unique is that the majority of the bigger projects have been spearheaded by locals, from producers to the writers, such as the case with the 2016 international award-winning movie Maudie. “It’s really, really interesting that the majority of what we do is local, has been locally driven. The creative has been sort of developed locally. So we’re really strong there. I think another important point is that film and television is a very strong export industry,” Dorian argues.
When it comes to filming in Canada, cities like Toronto or Vancouver often end up being stand-ins for other metropolitan locales, like New York. But “Hudson & Rex” is set in St. John’s and viewers will be quick to notice familiar locations. For instance, MUN’s Bruneau Centre is the exterior for the St. John’s police department headquarters.
“St. John’s is a very unique landscape and you can’t mistake it,” says Vancouver-born Mayko Nguyen, who plays Dr. Sarah Truong, the chief of forensics in “Hudson & Rex.”
“There’s something quite gratifying about watching something and then recognizing your home place. Outside of the economic aspect of it in terms of employing people and getting jobs, there’s something also about just having your home seen and recognized,” she says.

The history of filming in NL 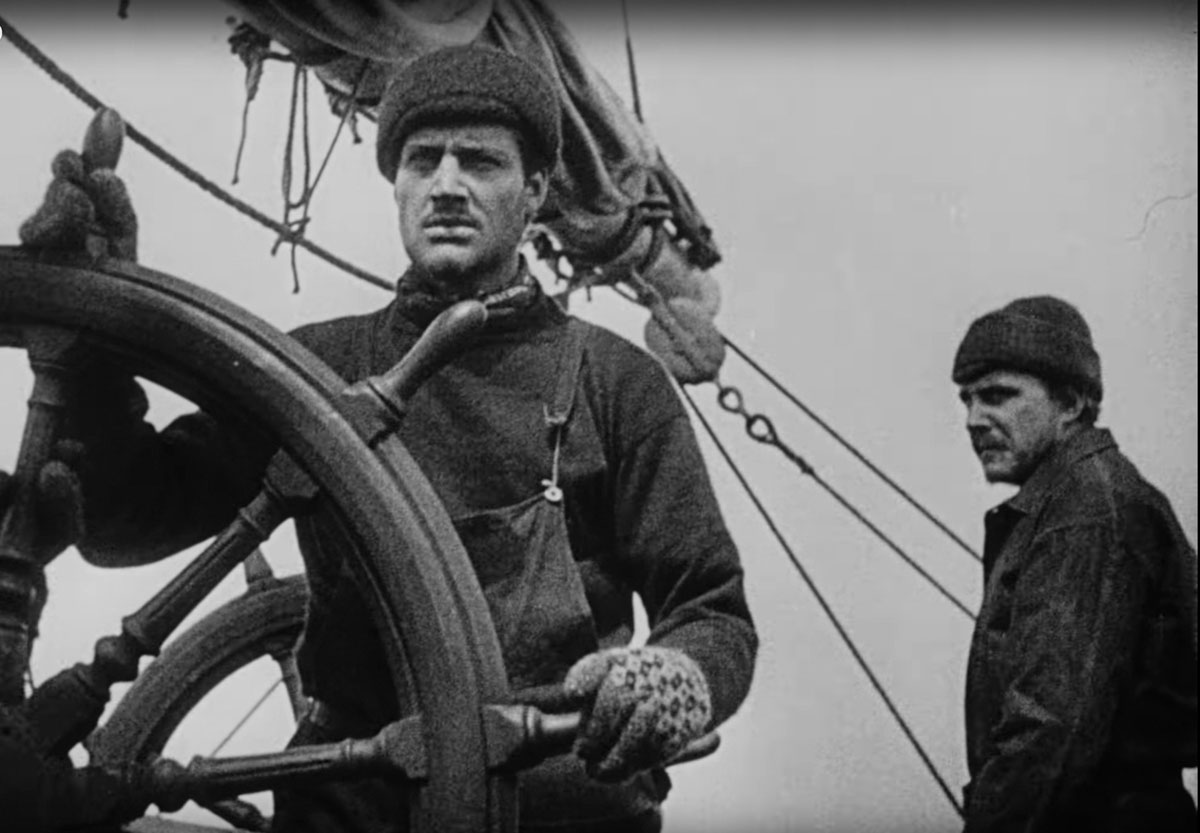 Filmmaking in Newfoundland and Labrador goes back further than you might think, and cameras made their way into the dominion in the early 20th century. While many people can name off The Viking (1931) and The Adventure of Faustus Bidgood (1986), “there’s a little bit of an untold history,” Paul Pope explains. After Joey Smallwood became premier of this new province in 1949, he created an elaborate film studio with its own mixing theatre and editing rooms. It was called Atlantic Films and mostly produced Newfoundland tourism pieces. John Williams (who’d go on to compose for Star Wars) wrote his first score for an Atlantic Films production in 1952, while he was posted in St. John’s with the US Army.
Memorial University was also deeply involved in film in the 1960s and had an enormous production facility along with its own TV channel. The local CBC network was also prolific in the ’70s, “so there has been a long tradition of storytelling and moviemaking in the province,” Paul points out.
Around this time, a cultural revolution was sweeping across Canada. Co-ops were being formed, with independent artists coming together from a variety of backgrounds like theatre, visual arts and film. It was in 1975 that the Newfoundland Independent Film Makers Co-Op (NIFCO) got its start, says executive director Jennice Ripley.
“I would say that everybody you can think of who’s working in the industry in Newfoundland or away has gotten either their start at NIFCO or has certainly been nurtured by NIFCO along their career path,” she says. Recognizable names like Sherry White, Adriana Maggs and Mark O’Brien are NIFCO alumni, and Paul Pope is a founding member.
Fast-forward four decades and NIFCO is still standing and keeping to its mandate. “We helped to develop the growth of the industry here, and we have stayed as a kind of central and vital hub for the industry. So what we say at NIFCO is that nobody really grows up and leaves NIFCO, which is unusual for a film co-op,” Jennice says.
NIFCO gives people a foot in the door to the industry. They offer mentorship, the resources to make short films and a way to learn the basics of filmmaking. There are also senior programs for those who already have some experience through their Picture Start program. People can also rent equipment and NIFCO offers a sliding price scale, so if an emerging filmmaker has a small budget, they can still have access to high quality equipment and post-production facilities.
The industry changed again in the 1990s when there was an explosion of new TV channels and therefore more content needed to fill those new channels. Paul saw an opportunity and formed Pope Productions
in 1998, and has gone on to work on Gemini-winning films, including My Left Breast.
“You need something in development, you need something in production, and you need something in the market,” Paul recites. “And that’s kinda the lifecycle. And that’s what Pope Productions has been doing for 20 years or more.” And right now, that “something in development” is “Hudson & Rex.”

The future of film in NL
According to Dorian, the local film industry had been picking up the pace even before the highly successful “Republic of Doyle.” There was a steady growth with projects like Random Passage, The Shipping News and Above and Beyond, “so a lot of that had to do with building infrastructure and building crew and so on,” he says. Work on a film can last six weeks, whereas a TV show can go on for months and years if the show gets multiple seasons. Longer projects mean crews can gain experience and stay in the province.
NIFCO’s Jennice says, “I think the growth of the industry has been a success story since the beginning.” Through the late ‘80s until the mid-2000s, there was a focus on mini-series like Random Passage and feature films, but not television series. “We were always kinda trying to grab that brass ring when we did a lot of pilots, we did a lot of limited series, but it wasn’t really until ‘Republic of Doyle’ and, subsequently, ‘Frontier’ and now ‘Rex,’ that we kinda reached a critical mass and an economic stability in the industry. And that’s what a television series does for any industry in any city.”
With this maturation, it means more people can stay in the province and still work in their field. However, as Paul notes, there are always going to be some people who want to leave for the bigger places, like Toronto and Hollywood. But at least now there is some choice to stay.

Lights, camera, action!
Back on the set for “Hudson & Rex,” Paul and I are standing off to the side as the crew scurry about with their own roles as they get ready to film another scene. While we wait, Paul takes me aside and delights in pointing out a little bit of movie magic: while the room looks like a regular office, he shows me that the back windows of the office actually pivot so they can get rid of reflections.
As I leave the set, I reflect on something uplifting Paul had said about the future of his chosen industry. “The more production that we could encourage and the more production companies we have doing this, it would be better. It’s truly a case of, you know, when the tide comes in, all boats rise.”

For more on the filming of Hudson & Rex, check out this online-only story.