How To Identify Trees

Many of us head into the woods during all seasons on snowmobiles or snowshoes, hiking or biking, and encounter many types of trees. However, beyond being able to tell a birch from a spruce, what do you know about them?
The relatively small, primarily coniferous forests of Newfoundland and Labrador form the eastern edge of the Boreal Forest Region of North America. Black spruce forms about one-third of the forests on the island and two-thirds of the trees in Labrador. The west coast of Newfoundland, in particular, is dominated by pure stands of balsam fir. Conditions are not generally favourable for large stands of hardwood species, but white birch and trembling aspen are significant components of mixed wood and hardwood stands in the province.
There are 21 native species and 16 introduced species of trees populating Newfoundland and Labrador. The following is a brief guide to the seven most commonly found native species, including some helpful tips to identify each one. 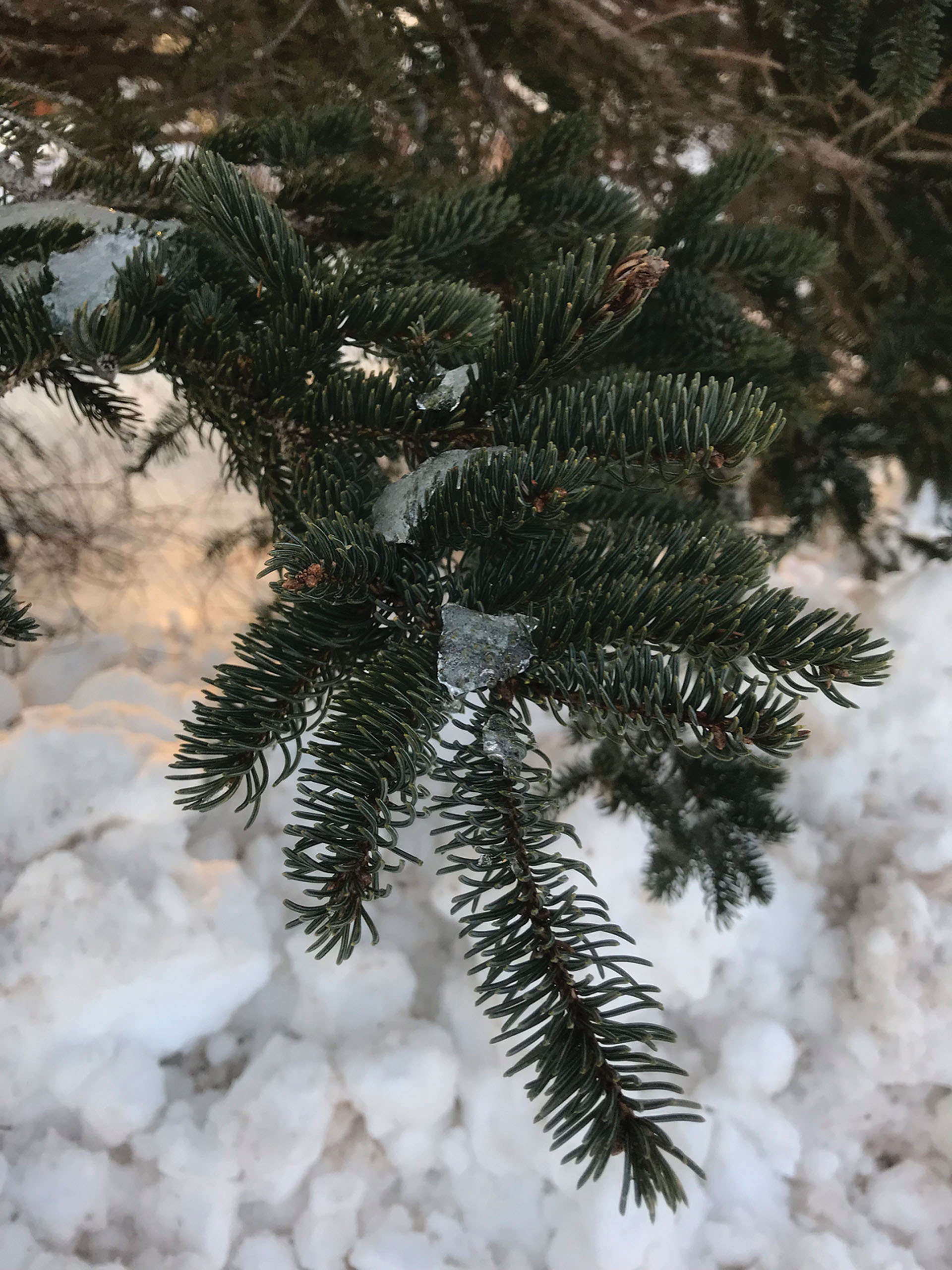 White spruce is a common evergreen coniferous tree in Newfoundland and Labrador, though less common than balsam fir or black spruce. It can attain a height of 25 m, but usually reaches less than 15 m in this province. The bark of younger trees is light reddish-brown, turning greyish-brown, rough and scaly with age. The yellowish-green to bluish-green needles are shiny and stiff with sharp points. They are spirally arranged on the twig and twisted upwards to crowd the upper side. The oblong, cylindrical cones are 3-5 cm long. These are green tinged with red at first, then turn pale brown as they mature.

Habitat:
White spruce is found throughout Newfoundland and as far north as 60⁰ latitude in Labrador. It’s more common along the coast than inland as it prefers moist, well-drained sites, but it also grows in abandoned fields and on coastal headlands. It is particularly plentiful as tuckamore on the Avalon and Burin peninsulas.
Uses:
White spruce is used in the production of wood pulp and lumber, and frequently planted for landscaping and forestry pur-poses. The young shoot tips have antiseptic properties and are often used to treat respiratory infections. 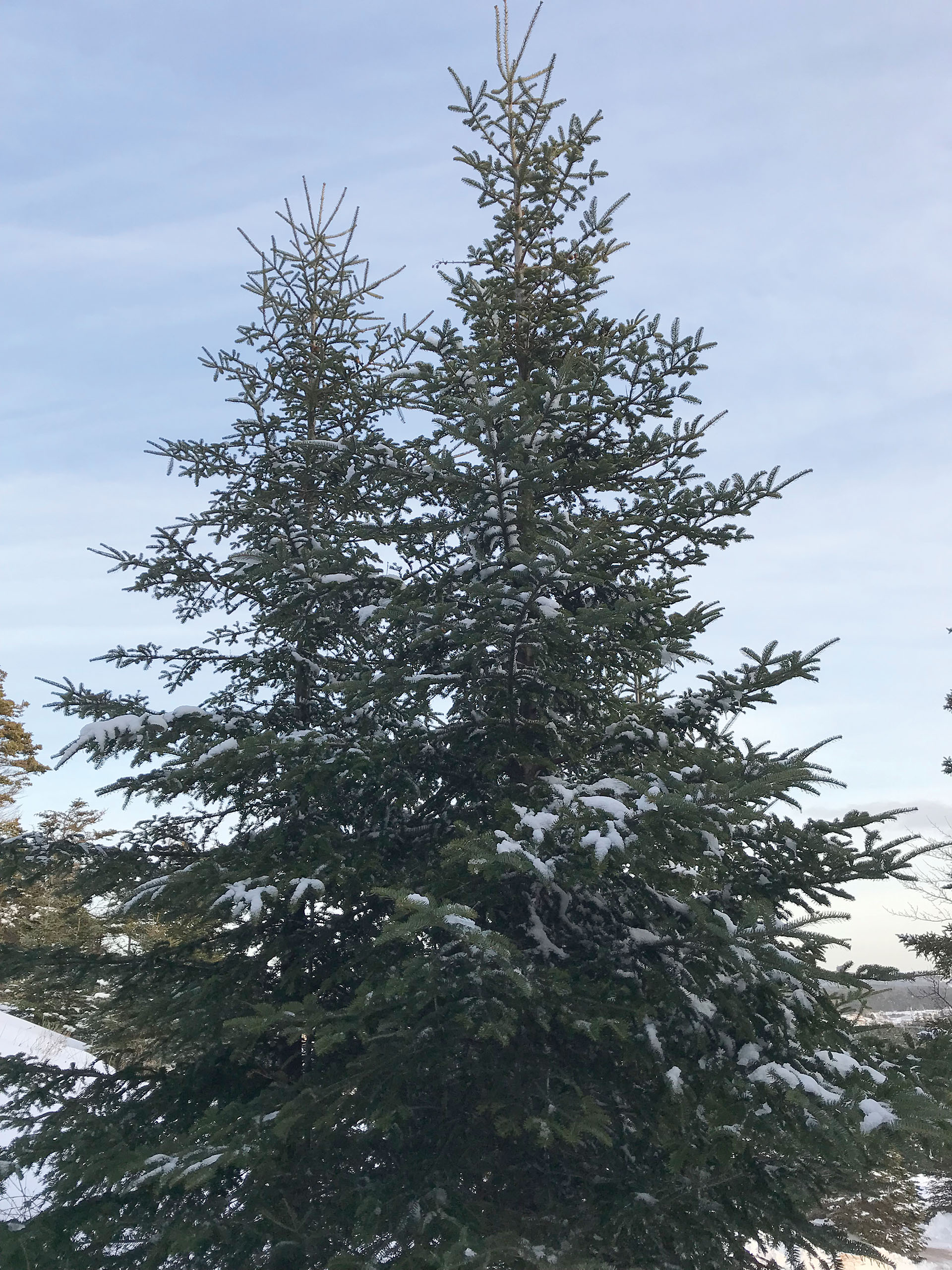 a.k.a. swamp spruce, bog spruce
ID Tip:
The needles have a pleasant resinous or menthol scent.

This slow-growing wetland tree usually grows to 12 m, but can be as tall as 18 m. The upper part of the crown is often oddly shaped, very dense and heavily laden with cones. The stiff, straight, pale bluish-green needles often have white stripes and blunt tips. The reddish-brown or greyish-brown bark is scaly or shredded when young, becoming darker with larger scales as it ages. The 1-4 cm long cones are oval, blunt-tipped and purplish-green at first, turning brown as they mature. They often stay on the tree for many years.

Habitat:
Found throughout Newfoundland and north to about 57⁰ latitude in Labrador, the black spruce is, in fact, the most abundant tree in Labrador (it is featured on the Labrador flag). It occurs mostly on poorly drained soils and wet, boggy sites. This species actually benefits from forest fires because the intense heat opens the cones, releasing seed to naturally regenerate burnt-over areas.
Uses:
Traditionally residents have used it to make spruce beer. It has antiseptic properties and has been used in the treatment of many respiratory ailments such as asthma and bronchitis. The wood is considered one of the best firewood species and is commonly used as a source of lumber and pulpwood. It is also used in the manufacturing of soundboards for musical instruments including guitars, violins and pianos. 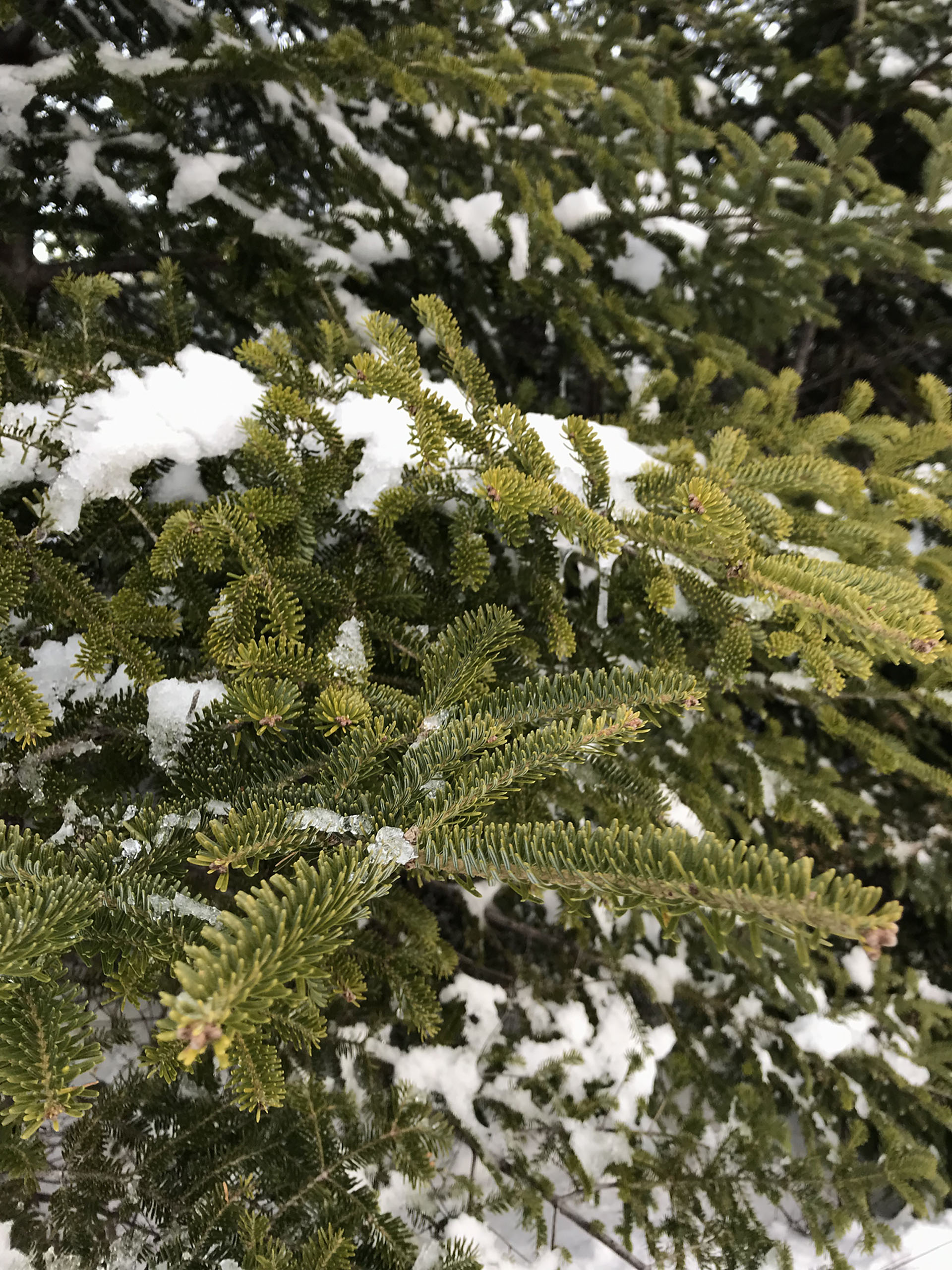 Fir can tower to 25 m, but it doesn’t often exceed 15 m in height in this province. The needles have rounded or notched tips and are shiny dark green on the upper surface and paler underneath with 10-12 lines of white dots. The bronze to purplish bark has many resin blisters that turn grey and somewhat scaly on older trees. The oblong cones are cylindrical, erect, 5-8 cm long and green at first, then purplish, and then rusty brown as they mature, usually with resin droplets on the surface.

“Snotty var” is a Newfoundland term for an old fir tree with resin clotted on the bark. It is considered too greasy to be good for burning because all the sap (turpentine) comes out of it, making it very sticky.

Habitat:
Fir is found throughout Newfoundland and north to about 54⁰ latitude in Labrador. It is very adaptable, occurring in a variety of habitats including moist, acidic soils; organic soils; swamps and mountains. It is the most common tree of insular Newfoundland and in windswept tuckamore along the coast.
Uses:
It is favoured as a Christmas tree and for making wreaths. The hardened sap is used in optical and microscope products. The tree is a common source of lumber, firewood and pulp. The needles and twigs are used as a moth repellent. Parts of the fir have also been used as an effective antiseptic and healing agent for cuts, burns, sore throats, coughs, headaches and toothaches.

Once a common tree in Newfoundland, it was almost completely wiped out due to major pine harvesting that began in 1890. Additionally, in the early 1900s, a lethal parasitic fungus called white pine blister rust devastated much of the remaining mature pine.

Often growing in stunted form in bleaker habitats, this tree can reach a height of 25 m. The straight, slender, bluish-green needles measure 4-8.5 cm, are soft and flexible with finely toothed edges and grow spirally on the twig in clusters of five or, rarely, three. The bark is smooth and greyish-green on younger trees, but looks darker and deeply furrowed with broad, scaly ridges on older trunks. The brown cones are elongated, 7-15 cm long, and drop from the tree during fall and winter after the seeds have shed.

Habitat:
White pine is found throughout most of Newfoundland but is absent from the Northern Peninsula and Labrador. It is most common in western and central regions of the island. Inhabiting a variety of sites, from rocky ridges to sphagnum bogs, it actually thrives in moist, sandy, acidic or loamy soils and cool upland forests with full sunlight.
Uses:
This is the most valuable softwood lumber in Eastern Canada. Its silver-tinted needles make it a handsome ornamental tree, and it is an important source of food and shelter for wildlife. 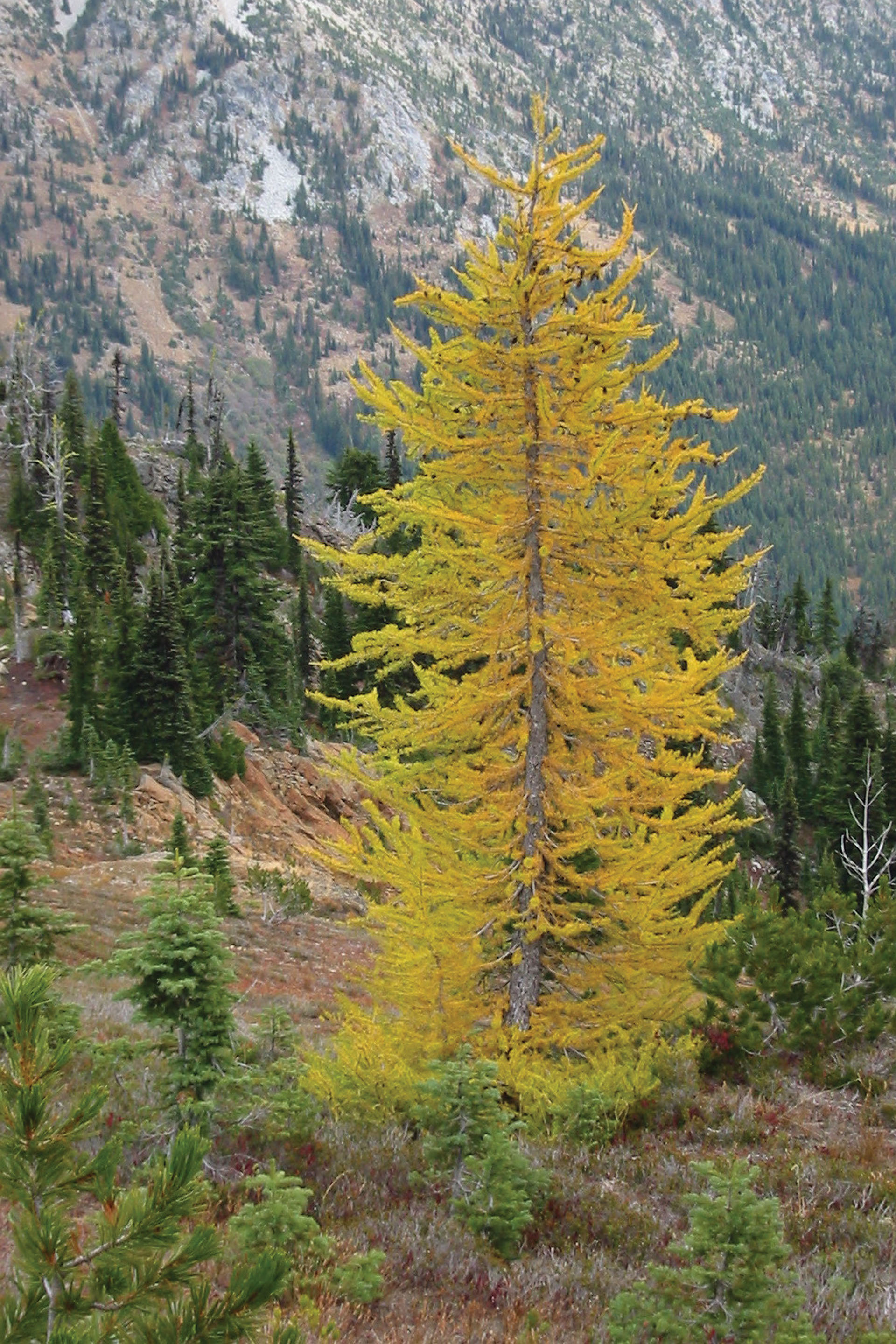 a.k.a. Tamarack, Eastern larch, juniper
ID Tip:
Its top usually leans northeast (a sort of natural compass if you’re lost in the woods).

Commonly called juniper in this province, larch is the only native coniferous tree that loses its needles in the fall. This small-to-medium sized deciduous conifer is rarely more than 15 m high and in exposed habitats may grow flat along the ground. The pale bluish-green needles are slender, soft and flexible, growing in clusters of 12-30, and turning yellow and dropping by early November. The bark is smooth and grey when young, turning reddish-brown and scaly as it ages. The cones are erect, often egg-shaped and about 1.5 cm long. They are reddish at first, but light brown when mature, and on short, curved stalks.

Habitat:
Larch occurs throughout Newfoundland and Labrador in various habitats including bogs, fens, heaths, serpentine barrens, hilltops and forests.
Uses:
Larch trees produce a heavy, durable wood used mainly as a firewood due to its fairly high heat value, but also as pulpwood and in making snowshoes, utility poles, posts, boats and boxes. The resin can be chewed to relieve indigestion. Tea made from the bark is used in home remedies to treat jaundice, anemia, rheumatism, colds, sore throats and skin ailments such as sores, swellings and burns. 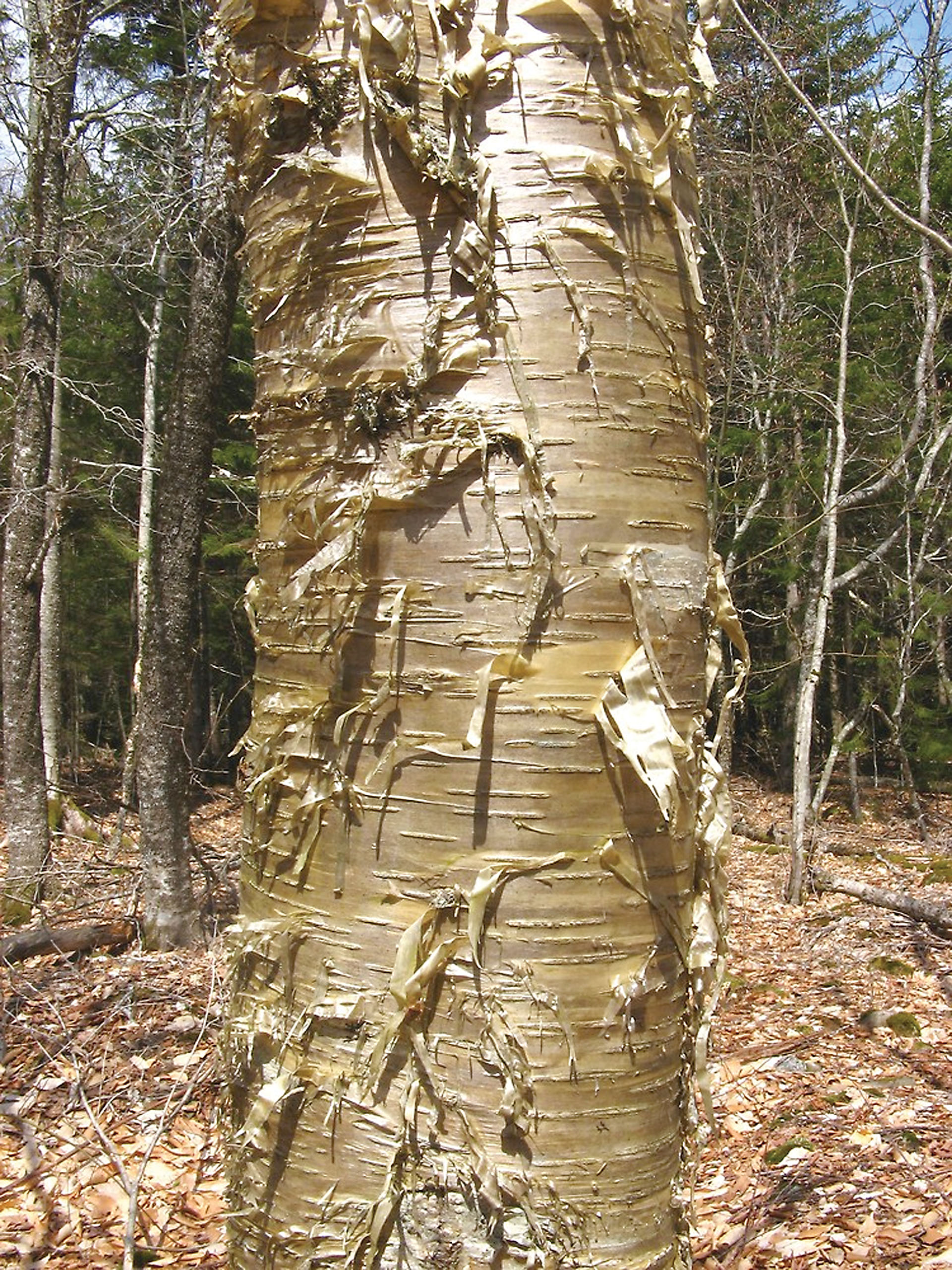 a.k.a. Witch Hazel
ID Tip:
Identifying the various birch species can be a challenge. Yellow birch can be distinguished by the distinctive wintergreen smell of the broken twigs.

Yellow birch is the largest of the eastern birches, often reaching heights of up to 23 m. Its coarsely toothed leaves are oval or oblong, gradually tapering from the middle to the tip, with a heart-shaped base. Leaves are dark green and hairless on top, but paler and usually hairy underneath. Young bark is dark reddish, becoming yellowish and peeling into thin, papery curls that give it a ragged appearance. Older trees have darker bark that is broken into plate-like scales.

Habitat:
It occurs mostly in southern Newfoundland south of Deer Lake, in the Bay D’Espoir area and in sheltered parts of the Avalon and Burin peninsulas. It is absent from northeastern sections, the Northern Peninsula and Labrador. Yellow birch prefers rich, moist woodlands.
Uses:
The wood is used to make furniture, cabinetwork, flooring, doors and veneer, and it’s an important source of hardwood lumber. It has a high heat value and, therefore, makes excellent firewood. Extract from its bark and twigs produces commercial wintergreen flavouring. 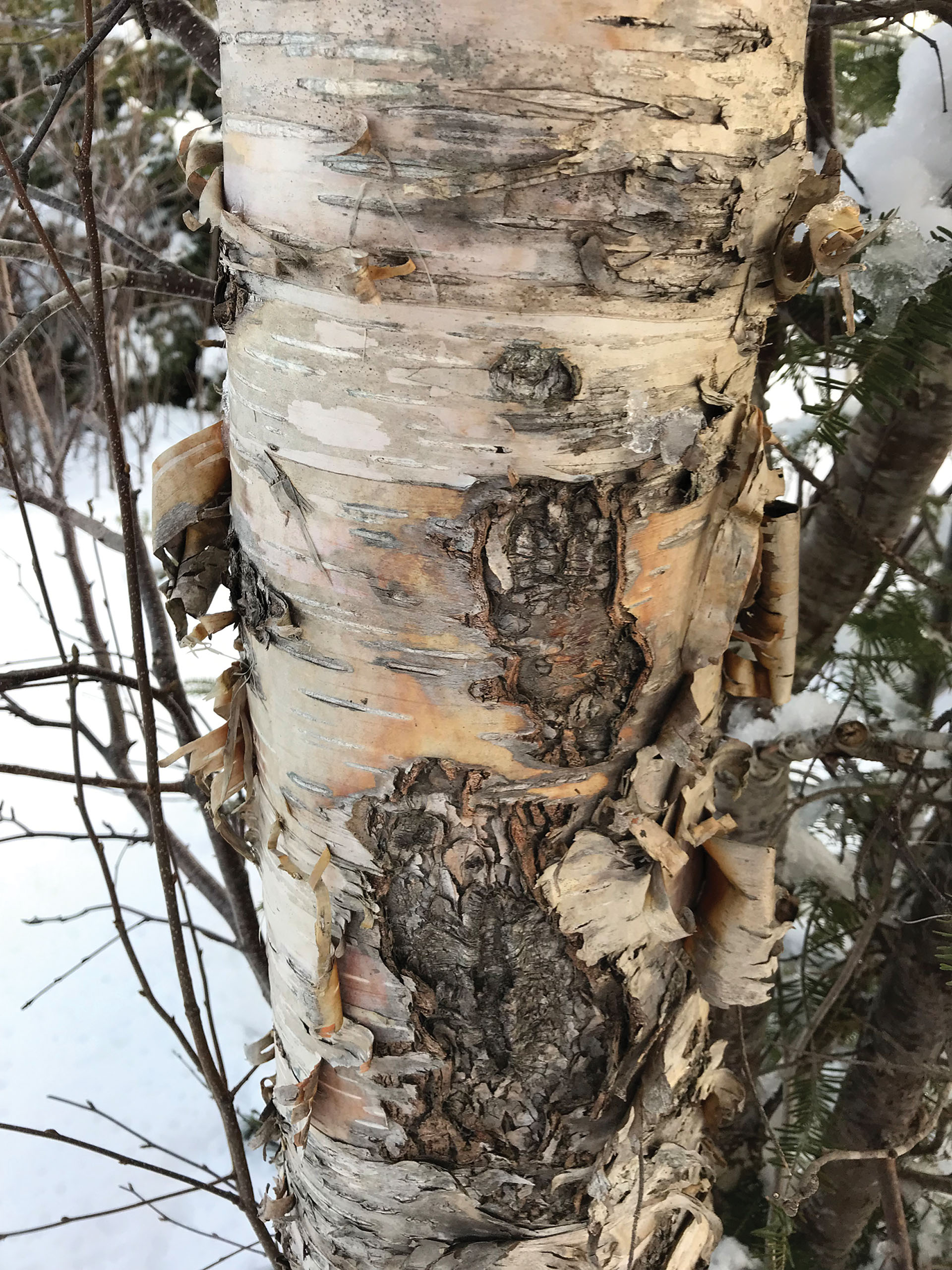 a.k.a. Paper Birch
ID Tip:
Look for the white papery bark, for which it is named, which peels easily and sheds in narrow bands, exposing an orange or pinkish inner bark.

White birch, our most common hardwood species, can grow to a height of 20 m. The coarsely, irregularly toothed leaves are ovate, tapering at the tip with a wedge-shaped or broadly rounded base. Leaves are dark green and hairless on top, and paler with hairs near the base underneath. Each leaf has, on average, 23 teeth per side. The bark of younger trees is reddish-brown with transverse whitish lenticels (raised pores on the bark). Mature bark is chalk white or cream coloured and peels easily into horizontal strips.

Habitat:
White birch occurs throughout Newfoundland and north to about 57⁰ latitude in Labrador. It’s more plentiful in central and western Newfoundland, found in various habitats from mixed forests, open woods,  and cutover areas, to hillsides and exposed coastal barrens.
Uses:
White birch has a high heat value, making it excellent for firewood. Other uses include craftwork, pulpwood, tongue depressors, high-end furniture, canoes, ornaments and skateboards. The sap appears in beer, syrup, wine or vinegar. The dried inner bark can be added to soups as a thickener or added to flour. A tea can be made from the bark and young leaves.

The mountain alder and the speckled alder can be used in treating a sore throat, diarrhea, sore eyes and inflammation. It can also be used to induce circulation and as a therapeutic foot bath. Alder chips also are great for smoking salmon, fish and meats, and for barbecuing.

DID YOU ALSO KNOW?

Newfoundlanders and Labradorians generally call the larch “juniper,” even though there is a real and very different juniper plant. Common juniper (Juniperus communis) and creeping juniper (Juniperus horizontalis) are both native to this province and are actually trunkless shrubs with many long branches that creep along the ground with upturned ends. The common juniper is the source of juniper berries that are often used as flavouring in cooking.

Todd Hollett is a wildlife conservation officer who lives on the Burin Peninsula. He writes about science and nature for Downhome.