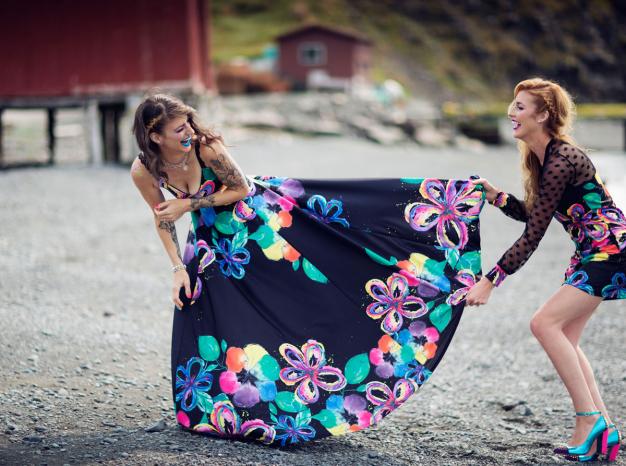 Thanks to these creative designers, high fashion is in style in Newfoundland and Labrador

When it comes to clothes shopping, many of us head to the nearest mall. There, we wander store to store, browsing through the racks of similar styles imported from around the world. But we could instead get fitted out in an original designer piece, made right here. High-end fashion has recently popped up in Newfoundland and Labrador, enabling us to be just as fashionable as boutique shoppers in the big cities like Toronto and Montreal. Downhome chatted with three businesses making a scene in the fashion world, while at the same time supporting local businesses. 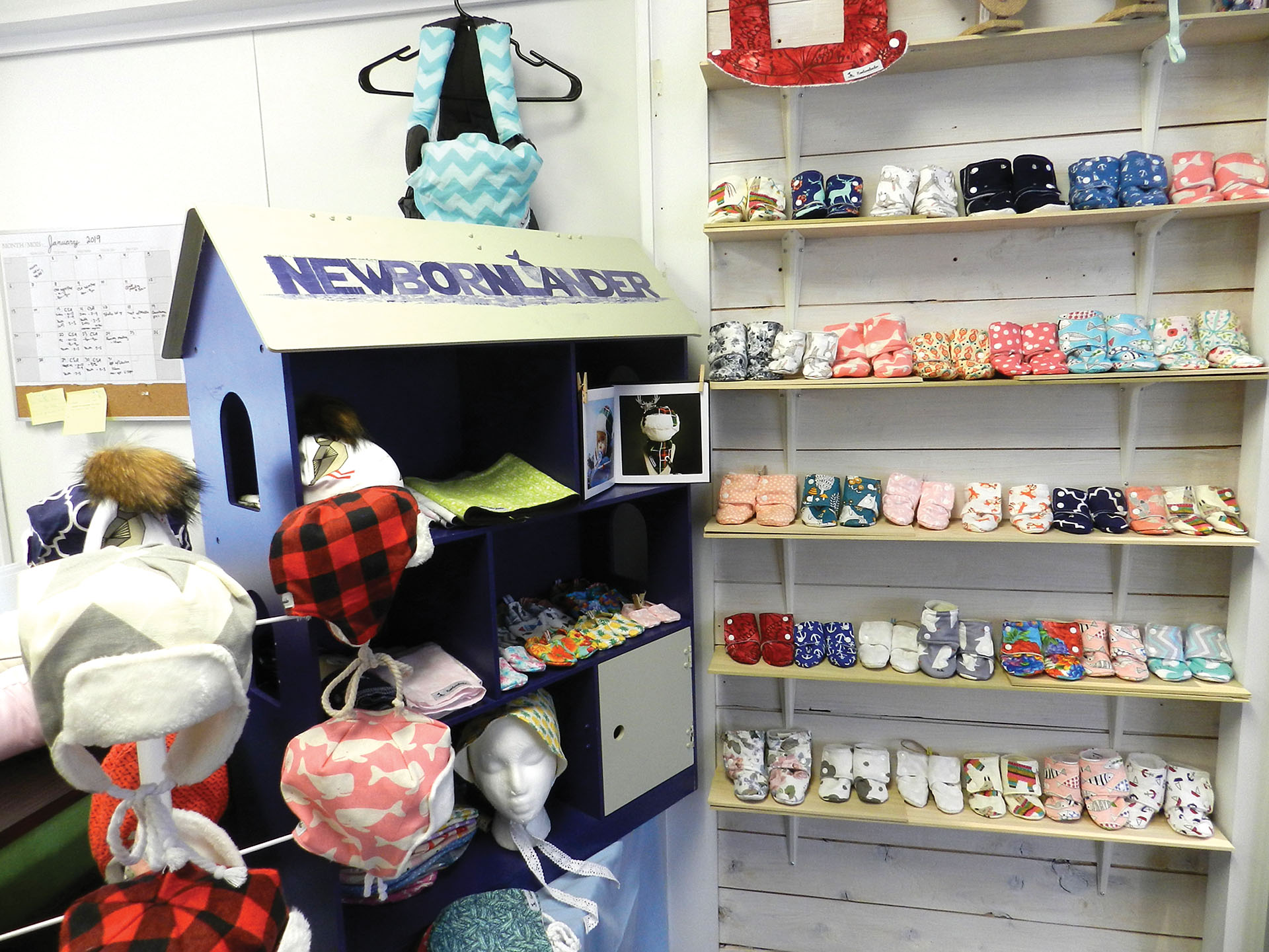 Standing on the water’s edge in Quidi Vidi village is the Plantation, a space for artists to work and sell their crafts. It’s also the home base for Newbornlander, a new business with a line of chic children’s clothing. You won’t find cartoon bears or overdone pastel colours here, and that’s on purpose. These designs are simple and elegant.
When Constanza Safatle was looking around for baby clothes, she didn’t like what she saw. So she bought a sewing machine and fabric, watched a few video tutorials and started to make her own baby bibs. “Then I started to develop other kinds of products and then never stopped,” she says. And that’s how Newbornlander got its start in 2017.
Constanza is from Chile and came to Newfoundland and Labrador so her husband could attend the Marine Institute. She was expecting their first child at the time. As a lawyer, she couldn’t work in her profession here, “but I can develop my own business.”
She was joined by Kerri Ivany in 2018. They met while working on a community program, “and we ended up taking to each other,” Kerri recalls. “And after a few months we decided to become business partners. I was a textile artist at the time, just sort of looking for direction, and she was looking for a business partner to take her business to the next level.”
Newbornlander makes bonnets, hats, booties and other items, as well as tents for newborns to two-year-olds. The fabric patterns are classy, with animal and floral prints. Constanza’s husband is a fishing engineer, so she likes to use nautical themes in the fabric, which blends nicely with this province. “They’re stylin’,” Kerri adds.
Constanza explains that while babies are wearing Newbornlander, it’s being sold to the parents who actually dress their kids. She’s seen it with her own firstborn, now two years old and starting to point out what patterns he’s drawn to. “I think when you go to the babies and the newborns, you need to think of the mom,” she says.
People can purchase items at Newbornlander’s studio at the Quidi Vidi Village Plantation or order online through their Facebook page. A website is next on the wish list, Kerri says, which will make it easier to reach new clients, espec-ially as they’re getting more orders from outside the province.
Newbornlander helped Constanza set roots in the province when she first moved here. For the immediate future, she and her young family will be staying here, but she does miss being a lawyer. “One of the things that attached me to Newfoundland is this, to have the opportunity to make a business. Now I have a partner like Kerri.” So even if she relocates back home, Newbornlander can continue with Kerri here and Constanza in Chile. 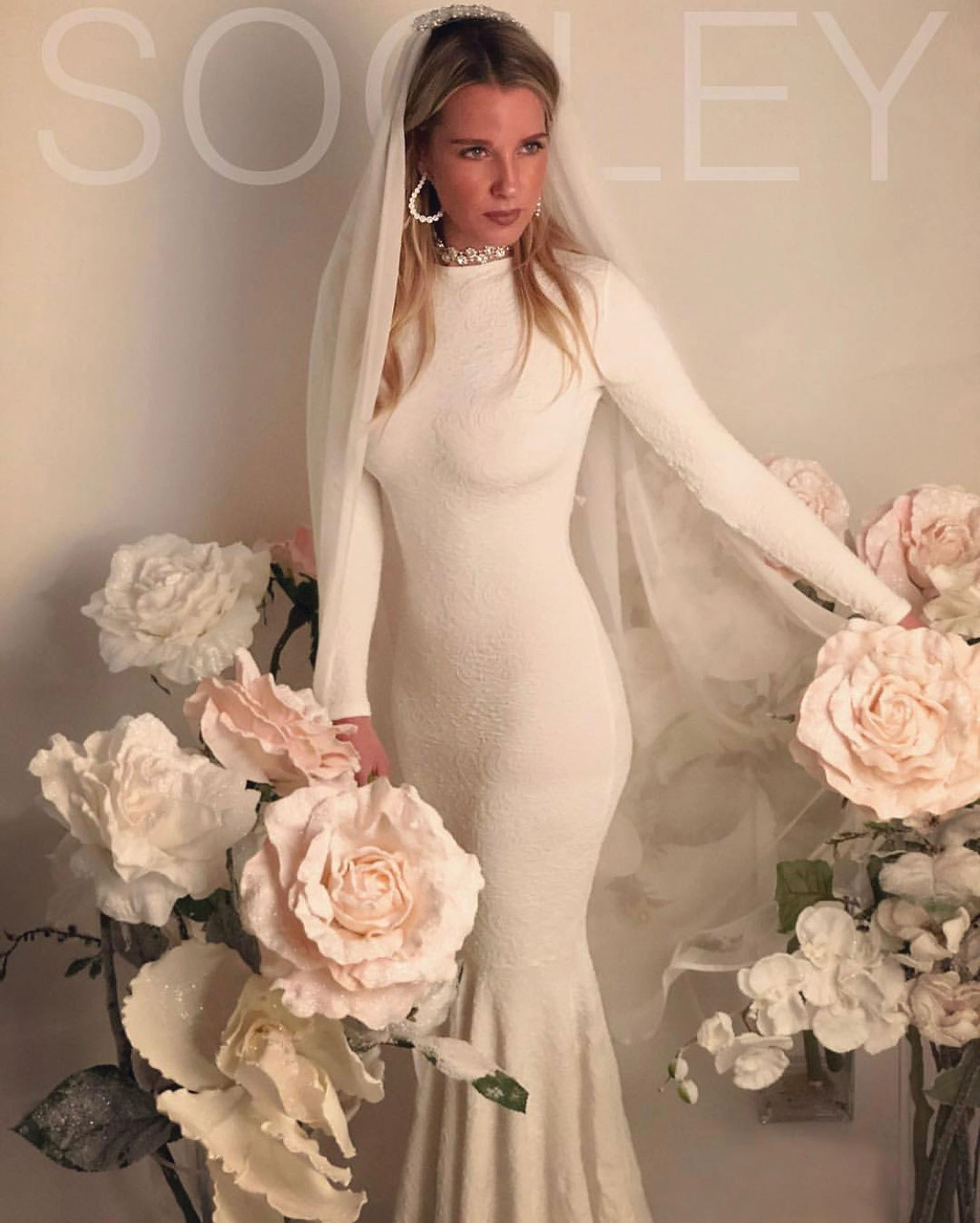 When Megan Sooley of Sooley Designs sits down to create a new piece, she gets her inspiration from the fabric. When she sees a fabric in a store, she can envision what it will be after she gets her hands on it. “The fabric, pretty much to me, builds the piece. It screams what it is to me. I’ve got this new piece of fabric and it’s kind of a furry, pink thing, I don’t even know what to call it. And it’s a sweater. It’s a big, comfy, cozy, over-the-top sweater,” she says.
Megan’s designed everything from loungewear to wedding dresses. “I can make clothes for any size woman, any body really. And I get a lot of inspiration from my clients in that way. So if somebody’s looking for a dress that is flowing, comfortable, but they want to show a little bit of skin but not too much - trying to work with all those elements.” It’s a challenge she enjoys.
With a professional artist for a mother, Megan had an artistic childhood. She got her first sewing machine at age nine. Using whatever materials she could get her hands on, she made purses out of old jeans and dresses from curtains.
At the age of 20 she decided on the spur of the moment to travel to Montreal, hitching a ride with a friend who was headed to Toronto. “And I had no plans whatsoever, really to go,” she says. “I just had noticed this school. I hadn’t applied or anything like that. And the next day he came and picked me up, and I had a suitcase and a sewing machine and I left.” Megan then applied to LaSalle College and graduated in 2010.
After school, she lived in Europe for a while before returning to Newfoundland and Labrador to work as a technical designer. Her work led to a repetitive strain injury from sitting at a desk, and she lost her job. With no money, Megan moved back home. Borrowing $20, she bought enough fabric to make a sweater “because it was the only way I knew how to make any money,” she explains. She quickly sold it online, which brought in enough money to make two more sweaters, which also sold. Sooley Designs started from there, and has been so successful that in 2018, the Newfoundland and Labrador Organization of Women Entrepreneurs (NLOWE) presented Megan with the Young Entrepreneur Award.
Currently, Megan employs three seamstresses and a saleswoman in her downtown St. John’s store, plus she recruited her mom as a seamstress and bookkeeper. At any given time, Megan can have 150-200 orders to fill, as well as people scheduled for fittings in the store. “I like to get to know my clients, each and every one. And I like to give them enough time with me.” So she typically only has two or three consultations a day for that reason.
Most of Megan’s clients are locals, but she does get some people from out of town and some from out of province. Just the other day a woman come into the store who’d lost her luggage and had a wedding party that night. Megan says it made her think, “If she doesn’t find something here, I’m not doing it right.” The client ended up leaving with navy blue polka dot dress.
Megan says she has no interest in going to the big fashion shows (think Paris, New York etc.), which costs a lot of money to attend. Instead, she uses her position to promote local talent, helping host fashion shows with the proceeds going to charity. Vogue photographers and models come here to do photo shoots, Megan says, “and I’d much rather show my clients and my people what I’m doing and let them experience it,” she says.
In the last few years she’s seen a lot of people coming back to Newfoundland and Labrador for the music, food and the fashion scene. “It’s all been coming up a bit more because people are coming home again, I feel. Because there is no better place, really. We’re the luckiest people in the world, I think. And I love the weather here… I love rain and fog and cold. So it’s like this place is made for me.” 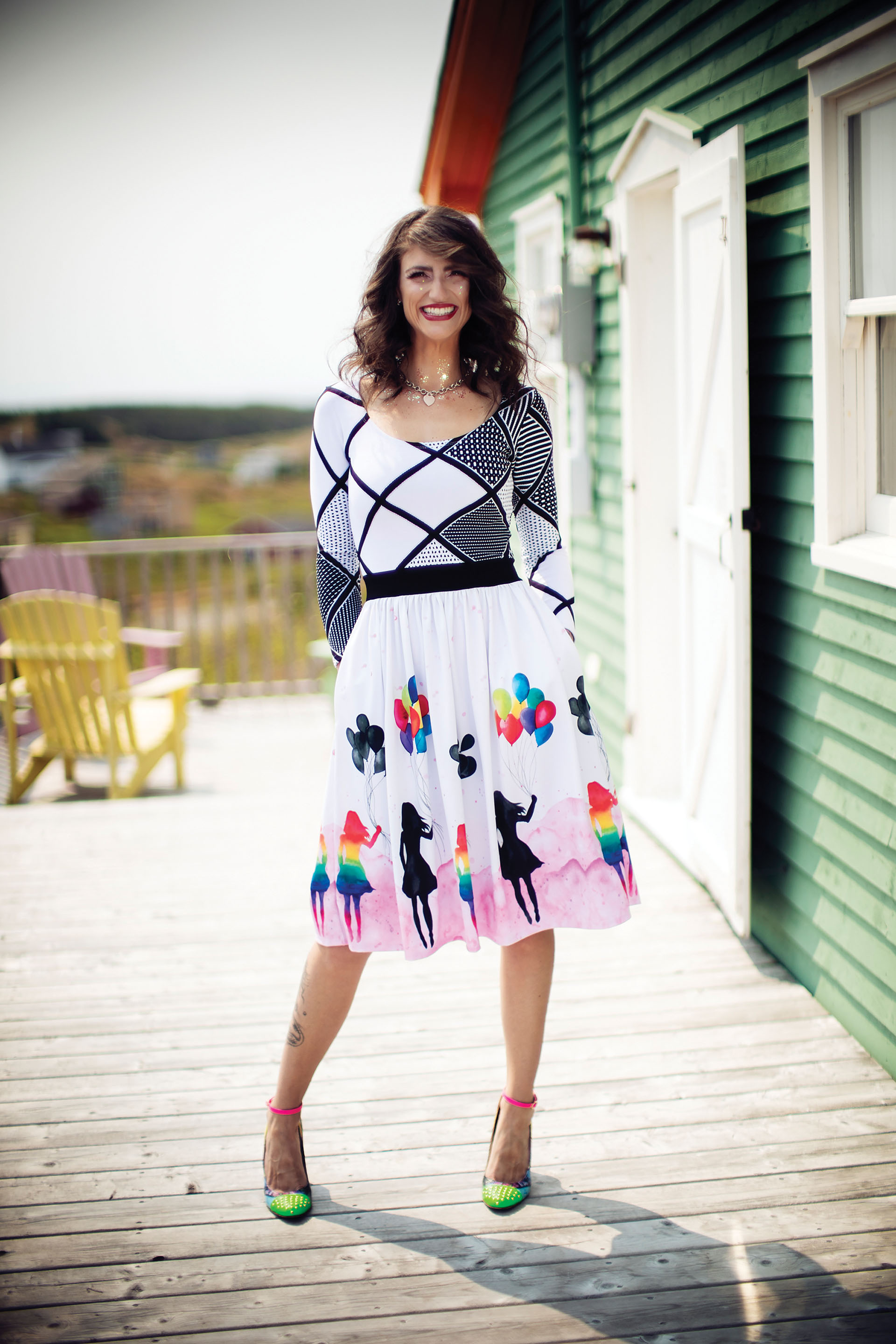 MJ Couch’s designs are a whirlwind of colour, and she has a simple reason for it: “It makes me happy,” she laughs. “You’re dressing in bright colours, people are kind of drawn to that… It really is just about being happy, and I just love bright colours, and I love working with bright prints. To me, it just makes it a little more unique.”
A former preschool teacher, MJ founded Melanie Jacqueline in 2011. It seems to have been her calling. “I’m a creative soul. I thrive from being creative, for sure. My mind never slows, there’s always ideas happening,” she says. For her, clothing is a way for people to express themselves. “There’s a lot of colourful people in this province, and so I think I’m helping those people.”
Growing up in Deer Lake, MJ was in junior high when she started sewing with her mom. Originally using store-bought patterns, she remembers the first thing she made was a green crepe mini skirt. Now she’s making a name for herself with her own designs, attracting clients all over Canada and the US, and the list is growing. A highlight so far was MJ’s invitation to fashion week in London and New York City last year. “It was pretty wild, it was definitely a great experience,” she says. Since then she’s continued to focus on growing her business in St. John’s.
Currently, MJ has a studio on Bates Hill where she sells her clothing and meets with clients by appointment. Shoppers can also find her pieces nearby at Johnny Ruth on Water Street, and she’s in the process of developing an e-commerce website in hopes of reaching new clients and giving them an easier way to shop.
A lot has changed since starting Melanie Jacqueline, but some things have remained the same. MJ is the only person sewing and has a sales assistant who works at the shop.
“I would love to expand, it’s just a work in progress. We’ve been working for the last year on some new ideas and plans, so we shall see,” she hints. “But it’s very important to me that my hand tag is always ‘Made in Newfoundland’ and is true to that. It’s very important for me to keep this local.”
Always looking to innovate with other locals, for MJ’s recent collection she teamed with artist Sara Dillon of SJ Artworks to create a series of fabric prints. “It was custom Melanie Jacqueline fabric, not to be found anywhere else. And it was very true to me and my personality and some of my story. So that was really exciting,” MJ says.
MJ was one of the first designers to do high-end fashion in the province, and she has watched the fashion scene expand in last few years. “It’s definitely growing,” she says. “There’s more opportunity, I think, for people to shop locally, which is a great thing. I think the people here have always been pretty fashionable, you know. I think just being in Newfoundland makes it a little tougher to find unique things or quality things that are actually handmade here.”
Not too long ago, people would leave the province to go shopping for higher-end items or local designers wanted to get out, but MJ has her feet firmly planted here. “I don’t want to go. I love it here. I mean, in the wintertime I might say differently,” she laughs. “It’s a good place to be creative.”