Ed Chadwick and the Two-Gun Kid 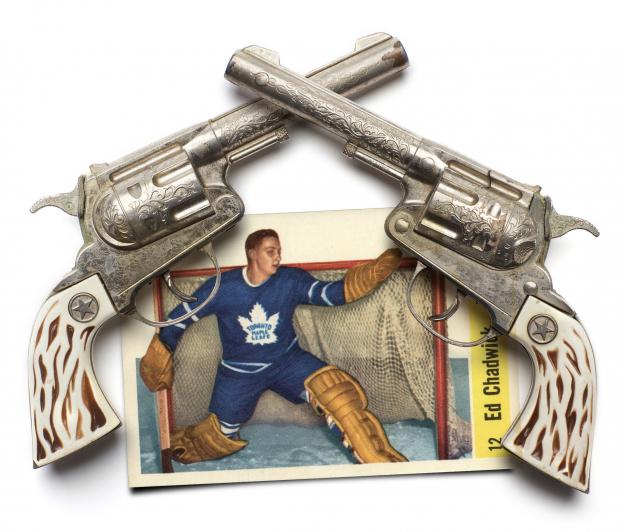 I was looking at my hockey card collection when the idea popped into my mind.

We didn’t buy our hockey cards in the shops back when I was a boy on Twillingate island. Instead someone, usually another boy, would order a small inventory from the Very Best Bubble Gum Company on the mainland, and sell the product out of their house and at school.

I could be wrong, but I think Fred Pelley was the local bubble gum entrepreneur at the time. Later, I sold the stuff myself. It was an easy sell.

For two or three cents you could buy a package containing a slab of bubble gum and four hockey cards. I was interested in collecting the cards of the Toronto Maple Leafs, my favourite team. I stopped browsing when I got to goalie Ed Chadwick’s card and stared at it for a moment (this was a few years before I ever heard of Johnny Bower). That’s when I got my idea to make a pair of goalie pads just like the ones he wore.

I found an old brin (burlap) bag and cut out two pieces. I then folded them in a way to create two smaller bags about the size of the goalie pads I wanted to make. Mom got out her big darning needle and helped me sew up the sides. Then I went down in the basement where Dad was usually planing wood for something or other and collected enough shavings to stuff the bags full. We sewed the top shut, and there they were: my brand-new goalie pads!

I cut four short pieces of fishing twine and tied the pads to my legs, one tie just below the knee and another just above the ankle. Then I studied myself, and a strange feeling came over me as I allowed my imagination to slowly transform me into Ed Chadwick.

The feeling was something like I had felt at Christmas, when I went over to visit my friend, Ralph Boyd.

I belted on the guns and tied the holsters to my thighs with the two pieces of rawhide attached. I pulled out the imitation-pearl handled, silver pistols, twirled them on my fingers and re-holstered them. I did this a few times and then that feeling came over me. I felt righteous, powerful and fearless! I didn’t see two wool vamps on my feet when I looked down; instead I imagined shiny cowboy boots. In that moment in my mind I had transformed into the Two-Gun Kid!

Now, about a month later, I fancied myself to be Ed Chadwick. On Saturday afternoon there was a game of shinny planned down on Churchill’s Pond, so I walked down there with my skates, hockey stick and new goalie pads.

Even though it was a bright day, it was freezing cold. It seemed like the pond was frozen right to the bottom, and the ice had a granite-like surface.

Around 16-20 guys had showed up for the game, and as usual we picked sides. In pond hockey or shinny, it didn’t matter how many players you had - everybody played. I was the only one who wanted to play goal. The other team had a player who stayed back and guarded their goal.

Equipment-wise, I was as well off as anyone. I think one or two guys wore their older sister’s white skates because they had none of their own. Some fellers had homemade sticks, or a broken one with only a few inches left of the blade. Nobody had hockey gloves or shin pads, so there was a “no rising the puck” rule. My boots served as my goal posts.

A strong northeast wind was blowing down the pond in my face, and it wasn’t long before I was getting cold and less enthusiastic. Like a balloon losing air through a pinhole leak, Ed Chadwick was slowly leaving my system. I had extra wool socks on my feet, which was really working against me. My feet were jammed into my skates so tightly that perhaps the blood wasn’t circulating well, so my feet started to get numb and painful at the same time.

I watched as a pack of players pushed and shoved each other near centre ice. For a while it seemed like nobody had possession of the puck for any longer than a second or two. Suddenly, Lloyd “Peewee” Clarke squirted out of the pack and had a breakaway on me. He was a couple of years older than most of us and was therefore a bit stronger. At about

15 feet out, he let go a powerful wrist shot.

My reaction was to stick out my left leg turned slightly at an angle, to deflect the puck wide. It worked, but instead of it deflecting off my skate blade, it deflected off my ankle.

Pain came shooting up from my numb foot and - “Poof!” - all of Ed Chadwick was immediately gone! Now I was just a near frozen kid on frozen water with the winter wind whipping through my clothing. But I endured it like the man I wasn’t, and finished the game in immense pain.

After it was over, I took off my skates and squeezed my numb feet into my frozen, snow-filled boots and limped home. When I entered the kitchen, Mom put a chair near the kitchen range and pulled down the oven door. Toward the end of the day Dad would always put a few splits (kindling) in the oven so they would be nice and dry when he had to light the fire the next morning. I shoved my feet in the oven on top of those splits and waited for them to warm up. As they did, the pain intensified to a whole new level.

Before I went to bed that night, I told Dad that he could use my brin-bag goalie pads to start the fire the next morning. I was finished as a goalie.

Ed Chadwick could bloody well be Ed Chadwick, as far as I was concerned. Being the Two-Gun Kid was much more appealing!