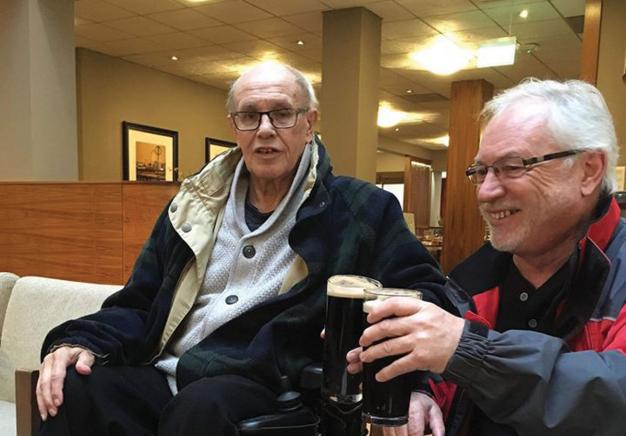 Growing up at the ocean’s edge in Port Rexton, Trinity Bay, NL, Rodger Randell had no idea that across that vast expanse existed a brother he’d never met �" a brother it would take nearly a lifetime to find. Sitting at the kitchen table recently with his wife, Joyce, at their home in Paradise, Rodger pulls a worn letter from its envelope. For 27 years, it was the only tangible link to a brother (and a branch of his family) he hoped, one day, to meet. Last summer that day finally arrived, and recalling the incredible story of how it came to be still brings happy tears to Rodger’s eyes.

“Even now, it’s still unreal at times,” says Rodger, glancing down at the piece of paper that started it all. Joanne Randell of Aberdeen, Scotland wrote the letter in 1991, seeking information about her paternal grand-father, a Newfoundlander named Joseph Randell who lived in Scotland during the 1940s. The man she described sounded a lot like Rodger’s father (Joseph), a member of the Newfoundland Overseas Forestry Unit (NOFU) who served in Scotland during the Second World War. It was the biggest piece of the puzzle, however, that didn’t seem to fit: Rodger’s dad hadn’t fathered any children during his time overseas. Or had he?

“My father being dead at that time for 14 or 15 years, we weren’t sure how to actually bring it up to my mother,” says Rodger. Eventually, he did. To this day, Rodger and Joyce remain stunned by his mom’s matter-of-fact response. “In her words, ‘Oh yes, I knew. There was a little boy. He was two when your father came home,’” recalls Joyce. Despite their curios-ity, they thought it best not to press Rodger’s mother (who’s since passed away) for more details.

A Journey to NL

Meanwhile, across the pond, Joanne was about to take a leap of faith. Soon after mailing her letter, the then 20-year-old  embarked on a vacation to Newfoundland and Labrador.

“We had no other family on my dad’s side living anywhere near us. Nobody could answer any questions, and I just thought, ‘Well I wonder if [Joseph] did

go back to Newfoundland and have more family,’” says Joanne, now 47, over the phone from Aberdeen. While here, she mined the local archives but uncovered no leads on her grandfather. She returned home having found nothing, assuming Joseph had died leaving no other descendants.

“I didn’t think the trip was a waste of time because I enjoyed the trip. I enjoyed what I saw, the countryside, while we were there,” says Joanne.  “But I do remember feeling disappointed that nothing had come to fruition.”

She didn’t know it then, but her letter was already making waves. Having processed his mother’s shocking admission, Rodger decided to reach out to Joanne, a niece he’d never met. But it was too late.

“By the time we tried to get back to Joanne, she had left that address. She had gotten married, changed her name,” says Rodger. Over the years, he and Joyce scoured the internet for signs of Joanne or her dad �" Rodger’s half-brother (also named Joseph Randell, after their father).

Several years ago the couple started dreaming of a trip to Scotland with a couple of their closest friends. They hoped having boots on the ground might aid their search. However, when one of their travel companions became ill (and, sadly, passed away), they put the trip on indefinite hold.

In bittersweet fashion, last August, Rodger and Joyce (with their son, daughter-in-law and their late friend’s widow) finally embarked on that journey. It wound up being so much more than they could have imagined.

A Journey to Scotland

Like most tourists to Scotland, they were enamoured with the scenery and the old, granite architecture. But the experience was all the more special to Rodger, given his dad’s service in the NOFU �" and knowing that, somewhere nearby, he had family. They had no great expectations of actually finding relatives until, shortly after arriving in Aberdeen, their 27-year mystery appeared solved within minutes.

Though Rodger and Joyce had combed Facebook countless times over the years, their son, Nick, decided to give it a go. “What he knew that I didn’t is that he could look by geographic area,” says Joyce.

Scanning the profiles, posts and friends of nearby Randells, the name Joanne Ferguson caught Nick’s eye. Her siblings were Randells, and digging deeper turned up photos of her father - Joe - who bore a striking resemblance to men in Rodger’s family. Giddy, Joyce fired off a message to Joanne, and the family went about their holiday hoping for a reply. However, as their time in Scotland drew to a close, they accepted they’d have to move on without having made the connection. As the family gathered in a local pub for their last meal in Scotland - just two hours before their scheduled departure - Joanne replied!

“All hell broke loose in that little pub,” says Joyce. Within minutes, she was talking to Joanne over the phone and arranging to meet at the hotel where they’d been staying. While Rodger and his family ran back to the hotel, Joanne shared the incredible news with her father.

“He was shocked, completely shocked,” says Joanne. “And the thing with my dad is, because he’s had a number of strokes, it takes him a long time to process information, an awful lot longer than it would for myself or anyone else.” Nevertheless, 75-year-old Joe was game to meet his “little brother” for the very first time.

A lump forms in Joanne’s throat as she recalls pushing her father in his wheelchair into the hotel lobby.

“My Uncle Rodger…he just walked straight towards my dad and went on his knees and gave him the biggest hug,” she says. “We were all crying; we all just were so full of emotion.”

An ocean apart their whole lives, the two men quickly learned they have more in common than most siblings raised under the same roof. Rodger and Joe were both career accountants. They share a lifelong love of sports. Their favourite dessert? Apple crisp. But the most striking tie that binds them is also the most touching: both Rodger and Joe grew up as only children. They are each other’s only sibling.

“It is something that, growing up as an only child, you miss. And as you get older you miss the fact that there are no nieces or nephews,” says Rodger. (In addition to Joanne, Joe has two other daughters and a son.)

That meeting was painfully short - after 90 minutes, Rodger and his family had to leave for their trip home. So three months later, Rodger and Joyce returned to Aberdeen.

“[Joe] was very much looking forward to Rodger and Joyce coming back when they came over in November, and he was happy to spend every day with them… And in my mind that makes me think that he is very happy about it all, even though he’s not really able to say it,” says Joanne, explaining he’s had difficulty communicating since his strokes.

The two sides of the family have swapped stories about the past, including what they’re sure was a true love story between Joseph Sr. and Joe’s late mother, Emily. Joanne believes the pair met in Aberdeen while Joseph Sr. stayed at a boarding house run by Emily and her mother. Owing to her role in the family business, Joanne wonders if Emily was reluctant to follow her sweetheart back to his homeland. Whatever the reason for their parting, the family believes it was amicable. Five years following his return from Scotland, Joseph Sr. married Rodger’s mom.

“I’m sure he thought about his son in Scotland because he wasn’t the type that would forget that,” says Rodger, adding his father was a good family man.

If his father were alive today, Rodger imagines he’d be pleased to see that his two sons had finally found their way to each other. And while it might have taken nearly a lifetime, good things come to those who wait.

“We feel as close to that branch of our family as we do to any family members,” says Joyce.

“I’m happy we didn’t stop looking,” concludes a tearful Rodger. “I think it was meant to be.”

Wow what a great story-so happy for you all-Roger you may or may not remember me but my late Husband(Scott) & Joyce both worked at Atlantic Lottery....