Stories and Songs: A Chat With Mark Hiscock 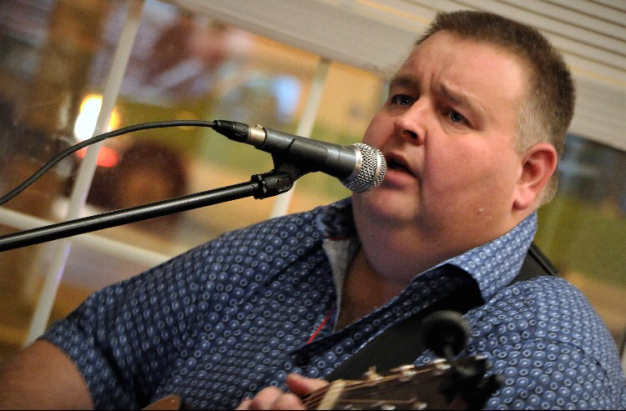 It’s 1984, and the Royal St. John’s Regatta is underway. Coxswain Cyril Boland, the father of seven sons, is about to fulfill a dream of his, as six of those boys sit before him. His grandson, 12-year-old Mark Hiscock, leans over to speak to the coxswain as the Holiday Inn sponsored boat pushes away from the wharf.

“Pop, I’m going to write a song about this,” he says. If you do, replies his grandfather, I’ll give you my medal.

That’s how Mark came to write “Grandfather’s Dream (The Rowing Bolands),” a song he added to the track list when compiling his new solo album titled The Old Fishing Schooner. Also on this CD is another song with close ties to Mark’s grandfather. Before he was a coxswain and before he lived in Quidi Vidi, Cyril Boland lived in Calvert, where in 1934, a schooner wrecked during a storm, losing all hands. The tragic tale, told in song as “The Schooner Gertie,” was passed down through the years and Cyril knew it well. “He sang it at all the house parties back in the day,” recalls Mark.

Mark revisited these two songs and many other favourites in Players Choice Studio, the recording studio of Shanneyganock bassist Ian Chipman, where he laid down tracks for his latest solo CD in between their Shanney commitments.

Mark has been performing and recording since he was eight years old, when he started playing on a local cable TV show on what was then Atlantic Cable. By the time he was 18 or 19 he was playing in pubs, and for the past 25 years he’s been part of Shanneyganock, playing thousands of shows and recording several albums. So he’s quite familiar with recording studios. But his parents? Not so much. Although both his mom and dad often sang at house parties and are skilled musicians - Mark’s father taught him how to play accordion - neither had ever laid down tracks in a recording studio. And they didn’t really have much interest in going into the studio, says Mark, but he wanted them on his album. So Mark and Ian brought a multitrack portable recorder and previously recorded tracks to Mark’s parents’ house. He had previously given them the recording to practice to, and Mark’s dad, just like the pros, nailed it on the first take.

Listen to the accordion on “The Maritime Farewell” and you’ll hear just how well it all turned out - that’s Mark’s dad. Grandmother Boland was fond of singing “The Leaves Mustn’t Fall,” so he got his mother to sing that one on the album.

There’s a strong family connection on the album, and the songs are mostly ones Mark recalls from house parties at his place, but it’s not all family and friends. A special celeb-rity also makes an appearance.

Growing up, Harry Hibbs was one of Mark’s musical heroes. His mother’s family met him and saw him play in Ontario at The Caribou, but Mark had never met the famous accordion player, who died in 1989.

A few months before his untimely death, Hibbs went into the studio with his band and recorded some songs that had never been released to the public. Russell Bowers, who looks after all the new compilation albums, found the recording and passed it along to Mark.

“Russell called me and said ‘I hear you’re putting out a solo album,’ and I said ‘Yeah, getting working on it the next couple of months,’” Mark recounts. “He said, ‘I got a track that would be a good duet with Harry Hibbs.’”

playing on it, plus the accordion and harmony vocals of Mark, vocals from Renee Batten, and Patrick Moran on fiddle.

“I can get goosebumps today talking about it,” says Mark. “In the studio, with the headphones on, and Harry Hibbs singing into my headphones, and I’m singing harmonies with him, it’s like…” he trails off, motioning to the goosebumps on his arm.

After 1989, Mark didn’t think playing with Harry Hibbs would ever be possible. “But it finally came to be,” says Mark, “and I got a message the other day from one of his family members, saying how much they enjoyed it and it brought tears to their eyes to hear it. When you get a message like that, it sinks in a bit deeper.”

Harry Hibbs wasn’t his only musical hero, and in recent years Mark has had opportunities to play with some of the other musicians he looked up to as a kid, guys like Bud Davidge and Bugs Greene and others.

“Some people dream of singing with Sting, or whoever in the rock world. But a Newfoundland kid growing up, listening to Newfoundland music, the majority [of music] that I listened to as a kid, it’s always in the back of your mind as a kid - I’d love to sing a song with this guy sometime.”

Singing songs with people, and for people, is what it’s all about, and Mark plans to play some shows in support of the album, in addition to his weekly solo appearance at The Newfoundland Embassy in St. John’s. He’s been playing in front of audiences for all but the first seven years of his life, and still gets a kick out of playing for a crowd, especially the bigger shows Shanneyganock plays, like George Street Festival or their annual Christmas show. And this April he’ll head south with the band for the third year in a row, to headline the Downhome Music and Friends Cruise aboard the Royal Caribbean Harmony of the Seas.

When Mark and Chris Andrews are on stage together, it’s Shanneyganock, and the songs tend to be upbeat. But for his solo album, The Old Fishing Schooner, Mark chose mostly slower songs, with pedal steel slide guitar playing by Doug Randell that gives it a Newfoundland country feel. But no matter the label, or who he’s on stage with, playing songs for an audience is still a thrill for Mark.

“When you get up on stage and get a round of applause, there’s a bit of an adrenalin rush that goes through you. It feels really good… And you know that you’ve done a great job, you know that the audience loved the show. It’s a great feeling to know you can bring some enjoyment and positivity to a room.”