For The Birds - Wildlife Biology Research off Fogo Island 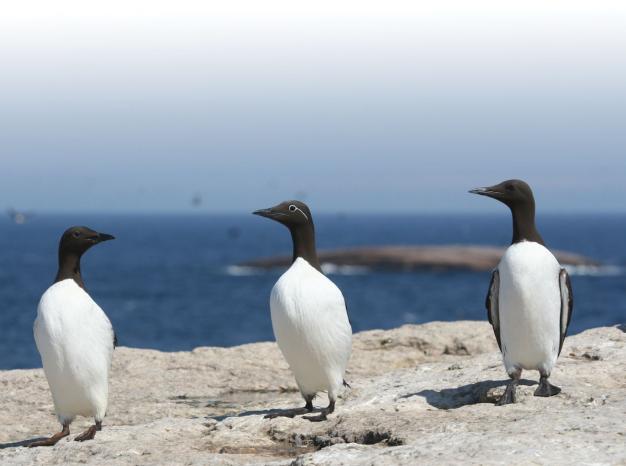 Dr. William Montevecchi leads us in an exploration of Funk Island Ecological Reserve
by Elizabeth Whitten

Located 60 kilometres east of Fogo Island, this granite rock rises out of the Atlantic Ocean. It’s home to a range of seabirds, including gannets, Atlantic puffins, razorbills, thick-billed murres and black-legged kittiwakes. The bird not found here is perhaps the most tragically famous former inhabitant: the great auk. Funk Island was one of the species’ last known homes on earth, and where they were hunted to extinction in the mid-1800s.

Today, it’s an ecological reserve that’s basically been quarantined from the rest of the world. Only researchers are allowed to access it. Among them is Dr. William Montevecchi, a professor of psychology, biology and ocean sciences at Memorial University of Newfoundland.
“So it’s essentially a flat rock,” Dr. Montevecchi describes. “It’s less than a kilometre long and less than a half a kilometre wide. And it’s essentially covered in birds.”
Once a summer, Dr. Montevecchi packs his bags and heads out to Musgrave Harbour for the five-hour boat trip. He’s usually accompanied by a grad student or fellow researcher who studies sea birds or marine biology. “But usually the maximum number is three people,” he says.
A lot of the research they do now is tracking the animals to find out how and where they find food, if the birds are getting enough to raise their young, as well as the impacts of climate change. They also try to get a general idea of the health of the population.
Sometimes the venture will be for just one day in June, to put tracking devices on some of the birds, either taped to their backs or wrapped around a leg. Then he might return a month later. Other times the trips can last one to two weeks, timed to coincide with the murre chicks getting ready to go to sea. “It’s a time when we can get a lot of information about how well the birds are doing, or not doing well,” he says.
Funk Island is no kind of vacation paradise. There’s basically nothing accommodating about it. A bare rock in the North Atlantic, there is no food or shelter, so visiting scientists bring all the necessary items to survive: plenty of water and their own food, which consist of lots of beans and chili, Dr. Montevecchi says, plus frozen foods, oatmeal and cabbage. “Cabbages are great,” he says. “You make a really good salad with cabbages, which is really nice to have.”
Shelter is provided by a Labrador trapper’s tent, which fits three people and can withstand the wind and storms. He also makes sure to pack a first-aid kit, a small generator and batteries. The most important thing is the satellite phone, which can be used in emergencies and to call the fishermen who pick them up. Even before they land on Funk Island, they assign a day when the researchers need to be picked up, but that day can change. Once, they were done all their research in the eight allotted days, but due to the weather, they had to stay for another eight days.
“And you’re always, always at the mercy of the weather because the hardest thing can be getting on and off the island,” Dr. Montevecchi says. “I’d have to call and say, ‘You can’t come.’ That’s the most dangerous part. It’s like when you’re in an airplane, when you’re in the air you’re fine. The risky parts are taking off and landing. And that’s the same with this island. We’d be fine on the island; we might be cold, we might be wet. You have to worry about hypothermia, but otherwise, the real risk part is getting on and off. So sometimes the conditions are just impossible.”
There are also challenges from the birds. During one trip, Dr. Monte-vecchi was bitten by an angry gannet, which apparently isn’t uncommon in his line of work. “Yeah, I have a lot of war wounds and scars. It’s just part of the thing,” he says, adding he bears no ill will to the bird because “I’m a predator.”
In fact, he knows a researcher that used to let the birds bite him after they’d successfully tagged the creature, just to give the bird a feeling of victory. “We do take a lot of hits, yeah, you do. But they’re deserved, I think. We’re really interfering with them,” he muses.

Funk Island TV
Dr. Montevecchi shares his precious access to Funk Island with the public through the YouTube channel and educational website called Funk Island: A Marvelous, Terrible Place. The idea to create a YouTube series came about a few years ago, and
he credits photographer Nigel Markham with getting it off the ground. He tagged along with Dr. Montevecchi on a trip to Funk Island a few years back and took a lot of
film footage.
Initially, they envisioned a TV show inspired by David Suzuki’s “The Nature of Things,” but Markham thought putting it on the Internet would make it available to anyone who was interested. “That’s what we tried to do, is make it, in that sense, accessible… to people but also to school groups,” says Dr. Monte-
vecchi, who also plans to use it in his university courses.
While Markham is behind the camera, Dr. Montevecchi is in front of it. “I’m the scientist who works there,” he explains of the show’s set-up. “I give a little tour of the island.” With the viewers and accessibility top of mind, they went out of their way to avoid using too much scientific jargon. Dr. Montevecchi also took along an honour student, Seth Bennett, to appear in the video series. A small grant from Newfoundland Independent Filmmakers Co-Op (NIFCO) helped them pull it all together.
The series has nine episodes and there are no plans to make more, but there are future plans for the website, Dr. Montevecchi says. It will con-tinue to grow and be expanded upon, with additional information about the birds, ongoing research and effects of climate change.
The History of Funk Island
In many ways, Funk Island is inaccessible, and that’s not just due to its distance from the main island of Newfoundland. It’s been a government-protected environment since 1983, reserved for study. Its location in the Labrador Current means there’s plenty of fish, which makes
it the ideal spot for birds to congregate away from human activity
and threats.
There was a time long ago when humans frequented this island because of the vast colonies of birds nesting there. While it was never easy to get there (especially before the invention of the engine), people still made the journey in droves. It’s what led to the demise of the great auk population here. The great auk were highly valued for their meat, feathers, oil, fat and eggs. Unfortunately, the breed was flightless and relatively docile around humans, so they were easy prey.
French explorer Jacques Cartier once wrote, “In less than half an hour we filled two boats full of them, as if they had been stones, so that besides them which we did not eat fresh, every ship did powder and salt five or six barrels full of them.”
Funk Island also held a lot of importance to the Beothuk, who used to make canoe trips out to the island in order to get eggs from the great auk. “And yes, they did that, but this is a brutal trip, or it can be. And for them I’m sure it was an adventure, to be pushed to the limit of your capabilities… But I think it was much more than really just a place to go get eggs,” Dr. Montevecchi says. It’s clear to him that Funk Island was a very dear place to the Beothuk.
Indeed, Shanawdithit had told her captors that for the Beothuk, there was a close association between the afterlife and birds, and they believed the afterlife was a “happy island over the horizon.”
“And all I can tell you,” Dr. Montevecchi says, “is that’s exactly what Funk Island is.”