Let The Right Mummer In 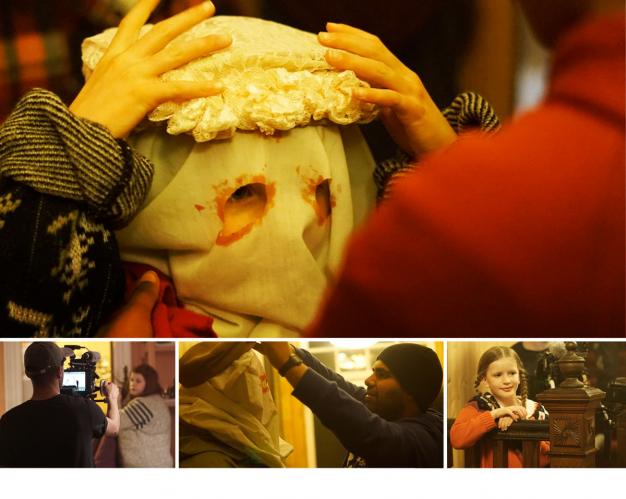 A filmmaker returns to Newfoundland and Labrador for a chilling take on mummering.

Imagine this: night has fallen over the town of Twillingate, NL. You’re home alone when there’s a knock at the door. You get up to answer it and standing on your porch is a mummer, but he isn’t here to dance in your kitchen. In filmmaker Bhaveek Makan’s world, this masked visitor might have far more sinister intentions.

Lovely Mummers is the latest short film to come out of Rendering Glint Films, a movie production company Bhaveek founded with his brother, Jashan. Filmed on location in Twillingate, at its core Lovely Mummers is “a home invasion film with people that you know. You know who’s underneath the masks and it’s a community story, so you’re from a small town [and] you pretty much know everyone there,” Bhaveek says. “And I think that’s what makes it extra creepy. Because putting on a mask is like a disguise, but underneath the mask you’re even more evil.”

Mummering is typically seen as a treasured tradition, where people dress up and visit their neighbours for a good time. It’s an exercise in community trust because while you don’t know exactly who you’ve let inside, you must know these guests.

When Bhaveek explains mummering to people outside the province, he gets a few strange looks. “I never thought it was ever weird, actually. We always did it, and it was only until we started talking to people when we realized that, oh, this might be a little creepy,” he laughs.

Bhaveek describes his film as a fairytale drama rather than a horror story. “I think it’s more of an unsettling family drama, and then all the horror stuff sort of comes out after that.”

The film is also open to interpretation whether or not, beyond the fairytale, there is a supernatural element at work. “I really wanted to talk about the metaphor of people being monsters and not actual fairies being monsters. There is a scene in the film that kind of shows a fairy, but the fairy looks like a human,” he says. “I wanted to explore supernatural and real human horrors and monstrosities within people,” he says.

Mummering does have a bit of darkness in its past. After the murder of Isaac Mercer in Bay Roberts, NL, by a group of disguised assailants in 1860, mummering was declared illegal.

The crew was filming in Twillingate last April, and for Bhaveek, this was a homecoming. In 2001, when he was 10 years old, he and his family moved from Durban, South Africa, to Twillingate, and later to Glovertown. In 2007, they relocated to Calgary, AB.

It was while living in Newfoundland and Labrador that Bhaveek and Jashan were introduced to filmmaking by a friend.

“I’ve always been interested in going back to Newfoundland to film anything, really. And then a few years ago when my brother and I were thinking about making a horror movie, the first thing that came up in our heads was mummers.” He went mummering as a kid in the outports. “It was a lot of fun,” he recalls.

When it came to getting Lovely Mummers started, Bhaveek says it all came together on a whim in 2015. “We didn’t really plan the short film or anything; we just were like ‘Hey, let’s announce that we’re making a short film, and then we just saw a lot of feedback and people were really excited.” So they started a crowd-funding campaign and then self-funded the rest.

Because they were creating a story about mummers, it was crucial they film in the province. They set out to make an authentic Newfoundland and Labrador film that people from here could watch and recognize their home, from the actors’ mannerisms to the writing and folklore. To achieve that, they hired local actors to get the unique accent that just couldn’t be mimicked. The sound technician and make-up and prosthetics artists were also all from the province. “There’s clearly talent in Newfoundland,” Bhaveek says.

The crew arrived in Twillingate on a foggy spring day, ideal atmosphere for this project. “It was windy, cold, wet. It was just perfect for the film. Obviously, it was really difficult to film in that, but it looked really cool,” Bhaveek says. There was even a foghorn blasting from the Long Point Lighthouse, an auditory element Bhaveek really wanted in the film.

“It was nice to be back home. We filmed a minute from the house that I moved to, so that was really sur-real. I went for a walk in my [old] backyard,” he says with a laugh, “so that was cool.” In fact, he even found a few of the friends he grew up with and they ended up helping out with filming. All in all, it took their small crew a month to film Lovely Mummers.

Any Mummers ’Lowed In…?

Rendering Glint Films is also planning to turn Lovely Mummers into a full-length movie called Allowed In. Local writer Cole Hayley is finishing up the script and the next step is to figure out how to fund it. Ideally the crew would go back to Twillingate to film Allowed In, but Bhaveek explains it’s expensive to do a feature-length production in such a remote location.

For now, Bhaveek is concentrating on the finished short film and screening it for audiences. Lovely Mummers has already gotten a warm reception at FIN Atlantic International Film Festival. He was there when it was screened in Halifax, NS, and says it was a great experience.

“And watching that on the big screen… was a really cool experience, even for me sitting in the theatre and hearing the sounds that we spent hours trying to mix and all the details really shining through on the big screen,” Bhaveek says. The audience seemed to like it as well. “People just appreciated that I stayed true to the folklore of it all.”