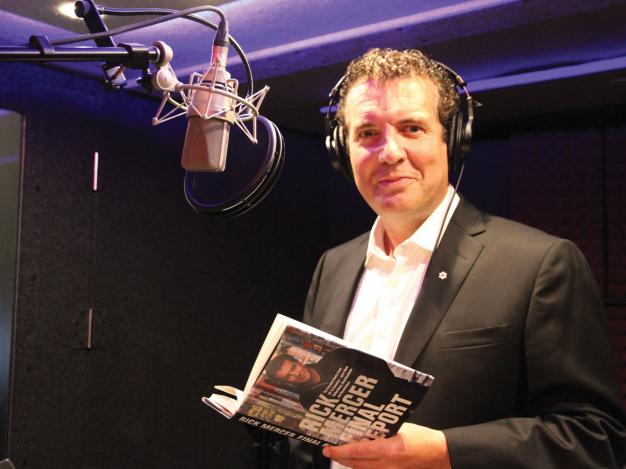 Newfoundlanders and Labradorians are a humorous and outspoken bunch by nature. Visit any community and you’ll find someone more than willing to give their two cents on the news of the day, or politics or the weather (two of our favourite subjects).

There is perhaps no better place, then, for Rick Mercer to have cut his teeth. Hailed by the New York Times as “Canada’s leading political satirist,” the Middle Cove native has built his career upon ranting. One might think that after nearly three decades of it, he would tire of the shtick or run out of things to say. Not a chance. If there’s one thing Rick Mercer never runs out of, it’s opinions - and hilarious ways of expressing them.

Growing up, Rick was surrounded by a cast of colourful characters. Perhaps one of his earliest influences was his godfather, the late businessman and politician Hugh Shea.

“I loved that someone could be as passionate about politics, could be as passionate about the province, and could be engaged on so many different levels. He went from, at one point, being in the legislature, to being as far from the legislature as you could possibly get. But he was still involved in party politics and would write more letters to the editor than I’ve probably written rants in my life,” says Rick over the phone from his Toronto home.

In his youth, Rick developed a penchant for politics and a knack for delivering his thoughts in his own witty, rapid-fire way. His big break came in the most unexpected of places: while working as a dishwasher at the Duckworth Lunch restaurant in St. John’s. One of the patrons was a man who produced political commentaries for CBC Radio, “which I thought were very dreary, being a cocky 16/17-year-old,” Rick recalls. “Every time he’d walk by there, I would be up to my elbows in dishwater and I would say, ‘You gotta let me come in and do one of those commentaries.’ And I don’t know what happened, but one day he actually said, ‘Are you serious? What about today?’”

And Rick has been ranting ever since. His eight-year stint on CBC’s “This Hour Has 22 Minutes” saw him bringing his signature rants (what he calls “the cheapest two minutes in Canadian television,” due to their bare-bones production) to a national audience.

Rick’s love of politics is equaled by his love for the country, something that was on full display during the run of his beloved comedy series, “Rick Mercer Report.” In 15 seasons, he visited every nook and cranny and participated in countless hair-raising adventures with the who’s who of Canadian culture, sports and politics - everything from bungee jumping with Canadian icon and Man in Motion Rick Hansen, and dangling 1,168 feet off the CN Tower with singer-songwriter Jann Arden, to skinny dipping with Bob Rae (who was then running for the leadership of the federal Liberal Party).

And, of course, he ranted - a lot. In fact, it’s estimated that over the course of the show, Rick walked 42 kilometres in Graffiti Alley (off Toronto’s Queen Street), where his rants were filmed. On April 10, 2018, he bid adieu to the “Mercer Report” after approximately 250 rants and more than 250 episodes.

In November, Rick released his fourth book, Rick Mercer Final Report, a rollicking ride that brings together 131 of his finest rants. Some of them, like “The Art of Dealing with Trump,” “Climate Change” and “The Facts Are Out” (“Why is it that now, when we have access to more information than ever before, we are becoming increasingly dumb?” Rick  asks) couldn’t be more timely in our hyper-politically charged climate. Some tackle more innocent matters, like how many Canadians can’t grasp how to use turn signals, or what it’s really like to attend the often-chaotic Question Period in the House of Commons.

While the headlines of the day might make folks want to run for the hills (or switch off their TVs, computers and brains), Rick strongly advises against it.

“So many Canadians, they view their Member of Parliament the same way they view a box of baking soda in the fridge - they kind of know that it’s there, they’re not even really 100 per cent sure of the brand, and until there’s a giant stink they ignore it. And then they go, ‘Oh, maybe it’s time to throw that one out and get another one,’” he says.

“If I had any wish, it’d be that people would be engaged on a day-to-day basis. I would reiterate that the parties often are quite content when Canadians don’t pay attention to what they’re up to. And it matters. All of the arguments like, ‘It doesn’t matter who I’m going to vote for because they’re all the same,’ that’s just not true. It was not true in the last presidential election and it was not true in any election I’ve ever seen.”

While some of the rants will make readers hot under the collar, there are more than enough laughs along the way. They’ll also make you think - or, at the very least, hit up Google to find out where the heck Flin Flon is (and if Rick’s “Talking to Americans” segment has taught us anything, it’s that learning more geography is never a bad thing). One thing’s for sure, he’s got these 90-second diatribes down to a science.

The book also offers an intimate, behind-the-scenes peek into the making of the “Mercer Report,” from all the things that went right, to those that went horribly wrong. What was it like rolling joints with the late, great, bow-tied author Pierre Berton? And how did a scriptwriting gig with legendary Canadian film director Norman Jewison inadvertently lead to him sending a scandalous snap to his mother? Well, you’ll just have to read the book to find out.

As much as the “Mercer Report” has helped Canadians learn about and discover their own backyard, Rick says it’s been an education for him as well.

“Accessibility is something that I just think of now as second nature... I just built a cabin in Newfoundland... and it’s designed so Rick Hansen can roll down the driveway, roll in the front door, roll through the living room, roll out through the deck, and then roll on down to the fire pit. And past that it’s the ocean; he’s on his own,” he jokes.

“But it’s a purely accessible building because of Rick and all the Paralympians I’ve had on the show over the years.”

With the “Mercer Report” behind him, Rick has been busy performing live and attending to other important matters, he says, like figuring out where to place his rhubarb patch and getting ready for the holiday season.

“I think there’s one Christmas in my entire life I wasn’t in Newfoundland,” he says, “and so getting home and spending time with my parents, and however many other siblings can manage to make the trip, is really important.”

While it seems like his career has come full circle, one thing’s for certain: this isn’t the last we’ll see of (or hear from) Canada’s favourite ranter.

“Ever since I was a kid, and I wanted to be on television and work in television, I wanted my own show... and for me, I was fortunate enough that it came true, and then I had it for 15 years. But if I wanted to do that right now, if I wanted to have a show on TV, it would be season 16 of the ‘Mercer Report,’ because if I had to write out my dream job, that would still be it. So, this is new for me,” he says.

“I’m sure there’ll be other adventures. I just don’t know what they are.”