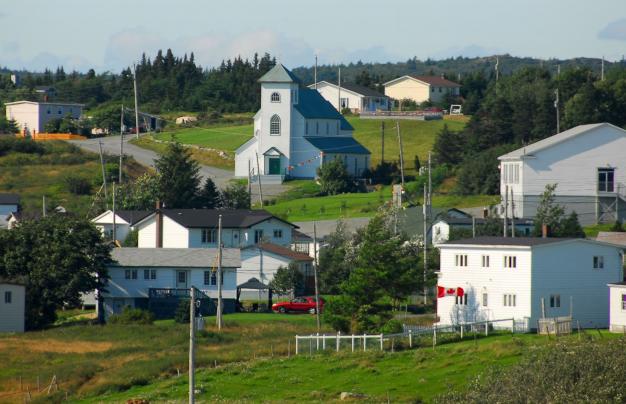 Loyola Hearn, a proud life-long resident of Renews-Cappahayden, is a quiet man on a mission, as he takes my recent phone call to discuss the remarkable team efforts of local people to rejuvenate, resurrect and (I have to say it) renew the rich cultural and historic attractions of his hometown. I’ve met Loyola a number of times at events over the years, and at age 75 his voice still carries the careful cadence of an educator, a songwriter, an author of recitations, a long-time politician and a diplomat. Hearn was all of these things, as well as the 28th Canadian Ambassador to Ireland from 2010 to 2015.

It is quite the resume for someone helping drum up interest in local sites, but Hearn says with a chuckle, “It is really a team effort, and I am only one person in a very active group that got together about a year ago and… decided to revive some of the attractions we have here. First of all we have to remember, Renews is the home of Captain William Jackman, who saved 27 lives on the coast of Labrador, and there is an effort by a separate group to erect a monument to him that will be tremendous.”

Hearn says his group “spent a fair amount of time working on our Grotto, which had fallen into some disrepair and it is a beautiful attraction. Our Lady of Lourdes Grotto is built on what we believe is the only ‘Mass Rock’ in the New World. The Catholics hid away during the days when they could not say mass [for fear of religious persecution at certain points in the history of the colony], and they brought in a priest at night and had mass behind the Mass Rock.”

He continues, “We also promoted and publicized writings on the Mount, which is the headland at the entrance to the harbour where the old fortifications still exist, and there are still four cannons there and a great view. There are writings etched into the slate down there that a number of people think go back hundreds of years. Now how many hundreds we are not sure yet, but these things are being looked at and the lettering itself is certainly drawing a fair amount of attention.”

The museum located in the former Regina Mundi School had been closed for a number of years. Hearn’s group reopened it this summer. “There are beautiful murals by local artist Dane McCarthy that clearly illustrate scenes from the town’s history and attractions of the area,” Hearn says. When asked which one strikes him most, Hearn pauses only a second. “One of the murals depicts the Masterless Men, and as you look out the window you can see the Butterpots [a nearby low mountain range] where men who jumped ship hid and lived free from the British. The story of the Masterless Men and that spirit is certainly alive and well here in Renews.”

Another mural in the museum depicts the famous Florizel shipwreck. Hearn says for those who don’t mind a short drive and a stroll, there is new signage, informative interpretive panels and a walking path at the Florizel site in nearby Cappahayden. The ship’s name is from Shakespeare’s The Winter’s Tale, in which “Florizel” was a prince of Bohemia. The vessel Florizel left St. John’s on February 23, 1918, en route to Halifax and then New York City. Unfortunately, it crashed into Horn Head at Cappahayden during a storm and of the 78 passengers and 59 crew aboard (there were only 137 people aboard, not 138 as was incorrectly reported at the time of the disaster), only 44 souls survived (17 of them passengers). Many local people assisted in the heroic rescue efforts.

I comment on the restoration of Holy Apostles Church, built in the 1870s in an example of vernacular Gothic Revival style architecture, and its lovely outdoor walking path following the route of the Stations of the Cross. The church building, a registered heritage structure, is at the geographic if not cultural and spiritual heart of the community. Hearn notes, “Our church was practically condemned until local people and committees went to work and have completely renewed that beautiful building.”

He adds, “So the last few years we all have been extremely busy here with a lot of local volunteers involved in fundraising and various projects.”

For Hearn, being involved with this project in his hometown, after a career that took him to Ottawa and Ireland, “it feels like I have come full circle. I started out as a teacher and principal in the very building in which the museum is located, which was our junior high school. I am back home where I was born, grew up and will remain in the little town of Renews.”