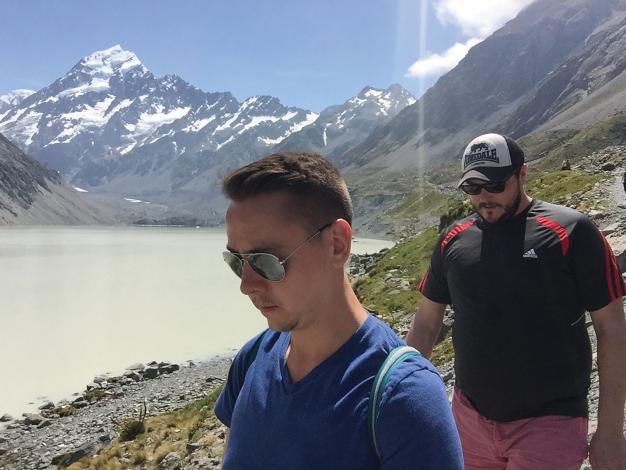 A love of travelling, and travelling for love. This is the wild story of Chris Brennan and Larry Mullett.

Their passports already heavily stamped by their mid-20s, Mount Pearlian Chris and Burin boy Larry had feelings of wanderlust long before they started travelling together.

At 21, Chris was living in Minnesota, taking road trips across eastern US, Canada and more, enjoying new and foreign experiences like skydiving, bungee jumping and getting his first tattoo. Separately, on the other side of the country, Larry, at 24, was working in Lake Louise, Alberta before road tripping across the west coast, through the Rockies and over the Alaskan Highway.

Chris and Larry did not meet by chance while adventuring in a foreign city - they met in the most ordinary way, in a downtown St. John’s, NL, nightclub, through mutual friends in 2010. Recalling that meeting now, eight years later and after four years of marriage, both confirm it was love at first sight. 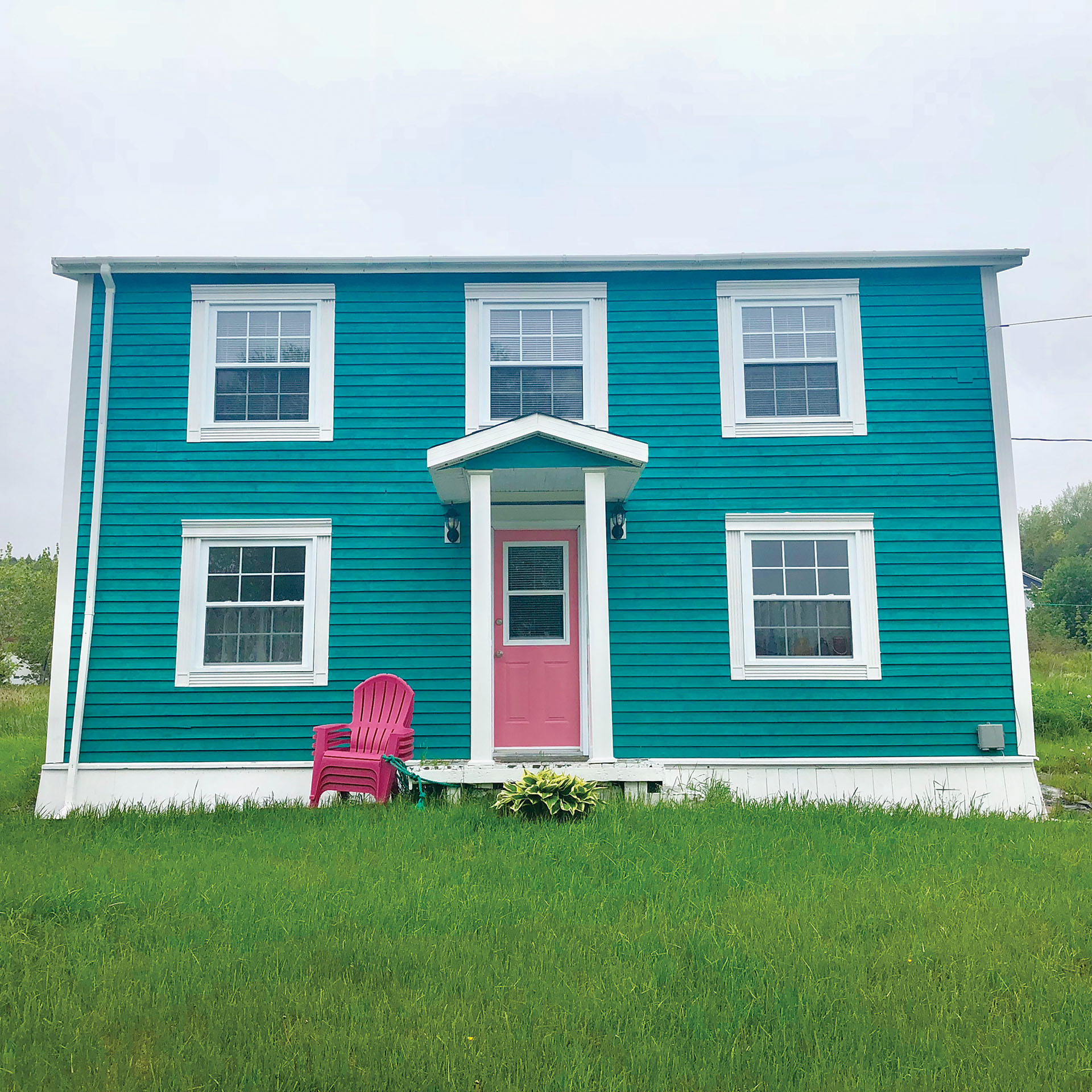 “We had our first kiss on Water Street as we were parting ways into cabs,” Chris and Larry explain in an email to Downhome from their current home in Dublin, Ireland. They made plans for lunch the next day, and their first date lasted 12 hours. The relationship moved quickly, with Chris - a recent university graduate who had just bought a plane ticket to move to Australia - soon moving into Larry’s house. With a looming departure date, and Larry’s home and car seeming like too much to leave behind, the pair decided to continue dating for the four months that Chris had left in Newfoundland. But when the departure date finally arrived, they were conflicted.

“We both decided that breaking up just wasn’t going to cut it, but a long distance relationship wasn’t going to either,” they explain. They made a decision that would change the course of their lives forever. While Chris went to Australia as planned, Larry tied up loose ends in St. John’s, selling his car and renting out his house etc.

When they eventually reunited Down Under, not having seen each other in six weeks after being together only six months, the couple struggled with the concept of their new reality.

“That first day, for a few hours, it was almost a bit awkward, as we both realized what we had done. In some ways, did we even really know each other? And now we had literally moved to the other side of the world to completely start our lives from scratch,” they recall. “We got past the initial shock of it all and got right into the groove of living a life of unplanned adventures abroad.”

Round and Round They Go…

Chris and Larry travelled around Australia for a few months before settling in Sydney to live and work for six years, while continuing to travel. They toured Canada, Cuba, Dominican Republic and the USA. In Europe they touched down in Austria, Belgium, Czechia, Denmark, France, Germany, Greece, Hungary, Ireland, Italy, Malta, the Netherlands, Poland, Spain, England, Wales and Vatican City. 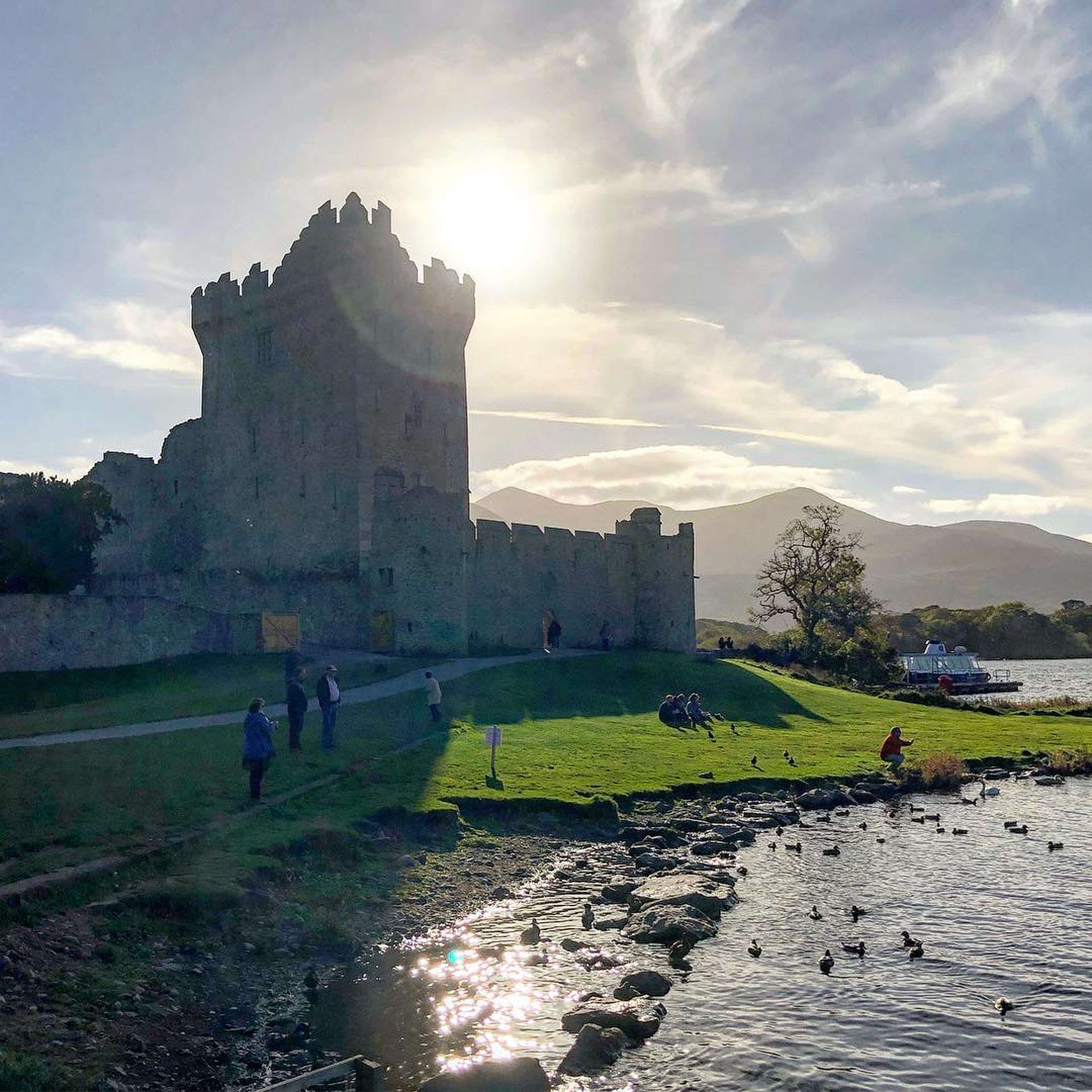 Chris and Larry have had some seriously wild adventures throughout their travels: great white shark cage diving in Australia, fire breathing in Thailand, canoeing in the Mississippi River, swimming in glacial lakes in New Zealand, riding camels through the Sahara Desert, white water rafting in Kicking Horse River in the Rockies, scuba diving shipwrecks in Bali, sailing in Ireland, learning to surf in Australia, and so much more.

They’ve bungee jumped, completed a Tough Mudder Challenge, rapped on “Canadian Idol,” and eaten everything from pig intestines and ears, to maggots, scorpions and cockroaches - none of which sounds like a typical vacation.

Their travels are documented on their blog, Facebook page and Instagram account, operating under the witty moniker of “Gays Around The Bay.” With so many adventures already under their belts, and having already lived in Nova Scotia, Minnesota, Alberta, Czechia and Australia, the pair eventually returned home to Newfoundland and Labrador.

“We have always loved travelling across Newfoundland with friends and family,” they share, listing a plethora of Newfoundland-specific activities that they adore - zip-lining and snowboarding in Corner Brook, hiking the East Coast Trail, snow-mobiling and fishing in Burin and Spanish Room, boating, scuba diving and iceberg hunting. 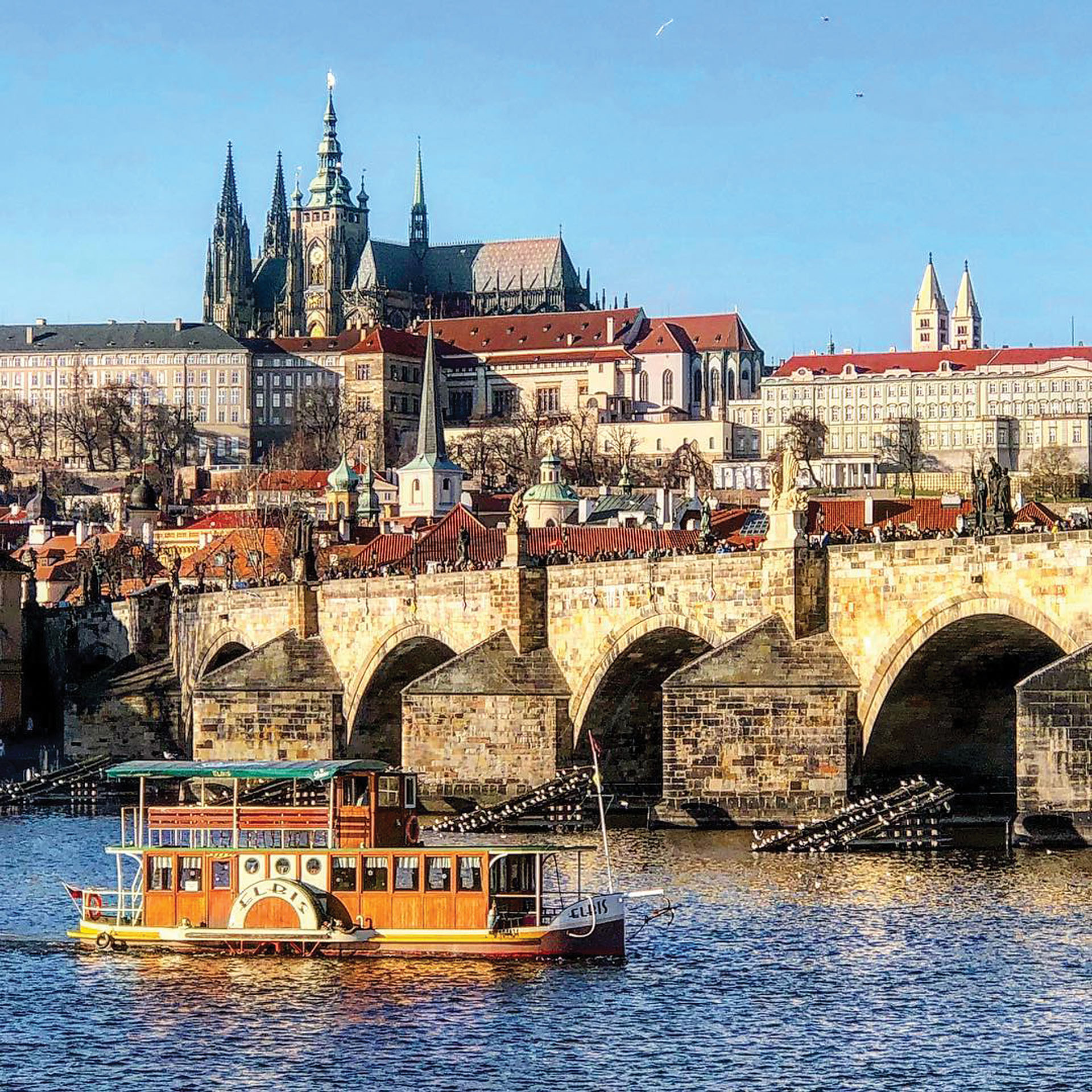 As arts lovers and foodies, Chris and Larry also enjoy theatre, local performances and art shows, and they’re especially excited about “the rise of a local artisan food and drink industry, with new craft beer breweries and fine restaurants opening up across the island.”

Their love of their home province is what brought them back to the island in 2016. They purchased a house in Carbonear and spent six months renovating it. Chris and Larry describe their décor style as “downhome kitsch,” inspired by growing up in Newfoundland and Labrador. The home has “an ever growing collection of flamboyantly coloured afghan blankets, throws and pillows - just like Nan makes - a modern balance of lace curtains, a prominent vintage painting of the Virgin Mary to represent Newfoundland’s Catholic roots, old oil lamps, homemade wooden furniture, barrels and oars built and owned by family back to our great-great-grandparents, and some brightly patchworked caribou heads,” they write. Their personal favourite amenity is a VCR, “with a full collection of childhood VHS favourites from the ’80s and ’90s, to really get back to the love of disconnecting and watching your favourite movies with friends at the cabin when you were a kid.”

They rent out their Carbonear home via Airbnb, and use it as their own base whenever they come back to visit. When they are home, the couple don’t spend much time sitting in front of the TV, though. Instead, they enjoy travelling to the amazing nearby sandy beaches, like Salmon Cove, and eating at The Stone Jug, which they herald as “an amazing interpretation of a classic colonial pub and restaurant.” 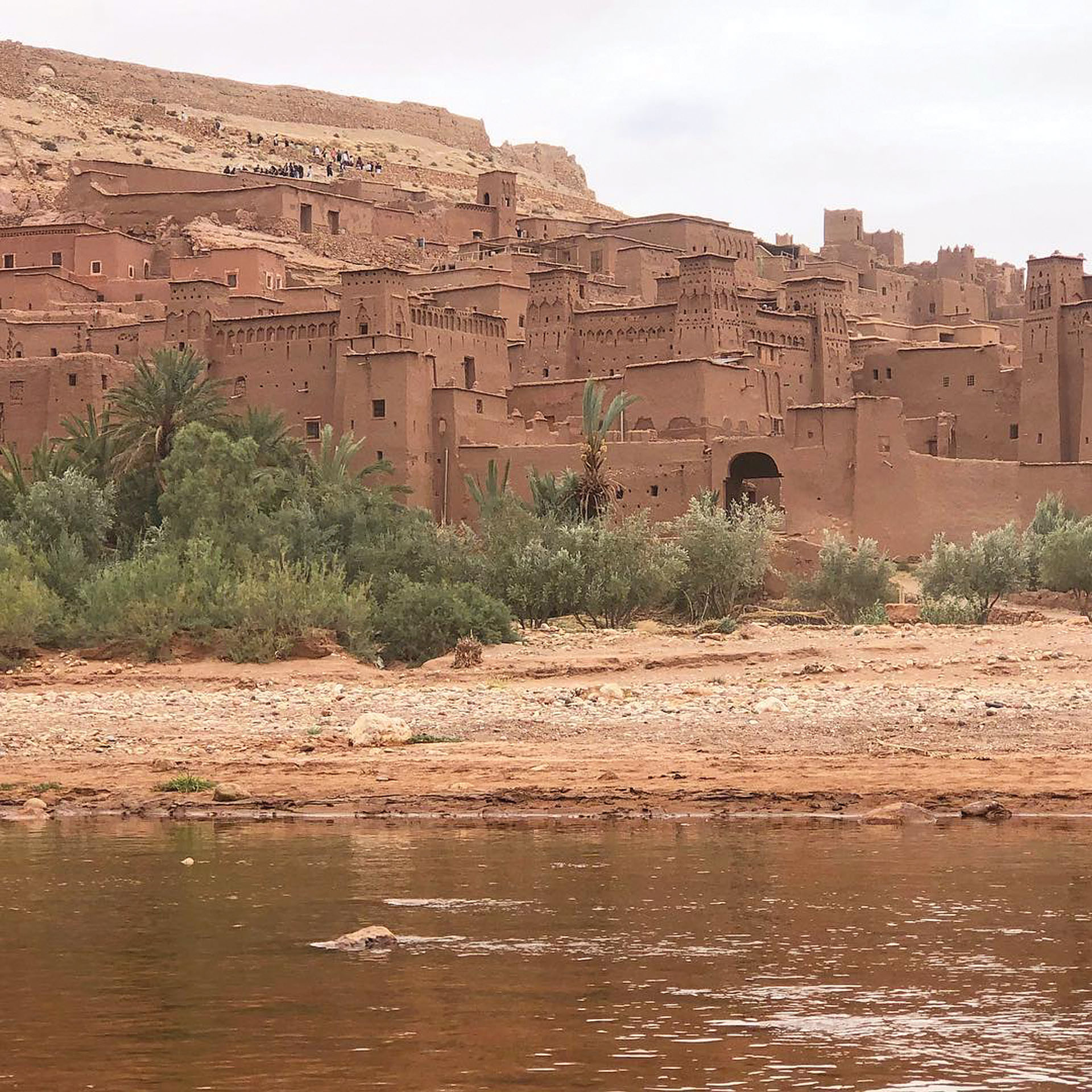 Until then, they are making discoveries in their other island home - Ireland. Chris and Larry moved to Dublin in 2017, where they are exploring their ancestral roots.

“We have been on the hunt to finally understand where our relatives came from and our ancestral link to Western Europe,” they explain. “We have found out so much about our family already and may be on the verge of a breakthrough of confirming our family lines here in Ireland.”

Their Dublin digs also works well as a jumping off point for exploring more of Europe and Africa. This past summer alone, the couple visited Morocco in July, and celebrated Pride in Amsterdam in August.

Their particular brand of wanderlust does not satisfy easily, and after living and travelling across five continents, Chris and Larry are already feeling the need to start crossing South America off their list.

“We are always up for new opportunities, but for the time being we are really loving living in Europe as a base and getting back home to Newfoundland as often as we can.”

Hidden Airline Costs
Depending on the airline, you may have to pay extra for a boarding pass printed at the airport, for last minute luggage, carry-on baggage, seat selection, food, water, headphones, a screen, movies, and more and more every day. Be sure to read up on your airline to know what to watch out for.

Taxi Meters
Whenever you get a taxi, agree on the price beforehand and, if possible, avoid cabs without a running meter to prevent any surprise “tourist price” taxi fares.

Train Over Flying
Trains can be so much more of a time and money saver than flying, especially in Europe. And the seats are normally much larger than on planes!

Free Walking Tours
Pretty much every major tourist city offers excellent free walking tours where you only tip what you can. Great way to save money if you’re stuck, and great way to learn about the city, get the local perspective, and make friends with other travellers.

Local Water Safe to Drink?
Nine times out of 10, it’s perfectly safe to drink the local water in a city or region, but hotels and restaurants are often happy to tell you you should buy bottled water even if unnecessary. Check online for more information on the area you’re visiting.

Plan Around Local Holidays
Double check any local holidays that could affect your trip. Like we learned, Munich clears out much more and earlier at Christmas; religious periods like Ramadan can affect access to food or certain services; and a long weekend in China could result in a country of a billion people cramming into all the sites you were hoping to see.

Don’t Fall For Rumours
Don’t let rumours, urban legends or, even worse, prejudices affect where you choose to go. So often certain places, people and cultures will get labelled as unsafe, arrogant or unfriendly when they are actually wonderful places full of amazing people! Do your own research and seek out advice from those with first-hand experiences for the real stories.

Climate Patterns
The timing and the severity of weather changes can vary dramatically between hemispheres and regions. If a holiday deal somewhere like Central America or Asia seems too good to be true, it could very well be during monsoon season or some other low weather period, which you don’t want be around for. The same way you may not want to be around for 45°C weather! So plan accordingly.

Photo Paralysis
Don’t live through a camera lens. If you’re a photo hoarder, you’ll probably never look at 99% of the photos you take, ever again. Live in the moment. Enjoy it. And start to more actively think of the moments you really want to keep that will add value to your life.

Respect Cultural Differences
Every culture has different cultural norms. For our social norms like “lining up,” it may seem barbaric and hard to accept if a culture does not practise this, but we may also appear equally out of line just by eating or taking a phone call in public. Try to learn and accept the culture you are visiting and respectfully try and live by theirs while there.

Working Holiday Visas
Dozens of countries offer Canadians (aged up to 35) visas for up to two years to explore and work for a whole new cultural experience. And they are super easy to get!

Remember to Relax
Don’t finish a trip more tired than when youstarted. Prioritize the things you really want to do because sometimes cramming every church, museum and statue into long days isn’t as memorable as just taking in the scenery and enjoying the local food.

Meet the Locals
Whether on tours, at bars, in restaurants or online, make some local contacts for the best insider advice - even better if they’re willing to show you around the local hotspots!

Don’t Make Excuses
There’s always excuses you can make for not travelling: can’t get your friends to confirm, responsibilities holding you back, or waiting for the perfect time, like retirement. If there’s somewhere you have always wanted to go, make a plan for it, ask for advice and be flexible. It may be much more attainable than you think.

Animal Tourism
Many animal tourist attractions like elephant riding, tiger petting, cobra shows and more can be linked to some very dark practices and cruelty. Do your research to be sure you’re aware and plan for acceptable alternatives, like visiting an elephant sanctuary instead.