The First Lady Of The House - a visit with Her Honour, Judy Foote 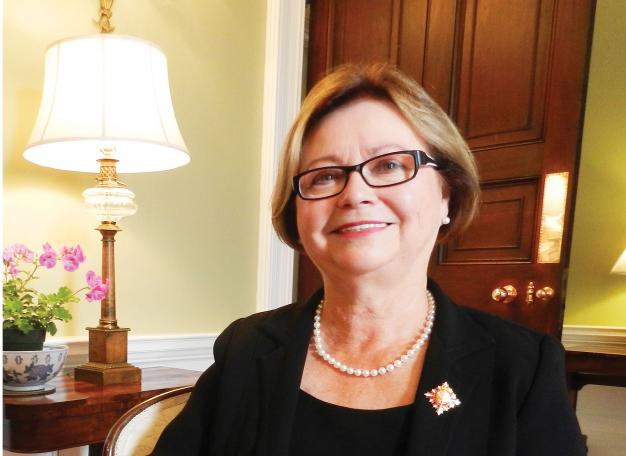 When walking along Military Road in downtown St. John’s, NL, you can’t ignore Government House and its expansive grounds. And if you see a flag flying at full-mast just beyond the lush tree border, you know the lieutenant-governor is in. Today, instead of walking past the entrance, I’m going inside for the first time.


Her Honour Judy Foote has been in this new position for a few months, and I have an appointment with her to chat about her entry into politics, her new role as the province’s first female lieutenant-governor and the personal touches she’s brought to the position.

I’m led through a hallway and seated in the drawing room. The walls are pale green, flooded with light from majestic floor-to-ceiling windows. There’s a fireplace and on its

mantle sit a Louis XV clock and two framed photos of Queen Elizabeth and Prince Philip. It’s a setting that wouldn’t look out of place in a popular period drama. Then in walks Her Honour, a decidedly contemporary person.

“Even after I was appointed and even going through my installation ceremony, it really didn’t hit me that I was the first woman in this position, and even holding this position, until my name was engraved in the board out there,” Lieutenant-Governor Judy Foote says. “And, of course, my husband is the first male consort, so he’s made history as well.”

It’s a long way from her roots in Grand Bank, a small rural town on the Burin Peninsula, where she had no political aspirations growing up. “It wasn’t a part of my career path,” she says. “I’m not sure it is for anyone, really. I think it comes about as a result of wanting to make a difference and to help others - and, of course, there are so many avenues you can pursue to do that.”

After graduating university, Foote worked briefly as a teacher in her hometown, then moved to St. John’s, where she took a job with the CBC. She went on to complete a diploma in broadcast arts, radio and television from Lambton College in Ontario. She worked at Memorial University before taking a communications job with Premier Clyde Wells in 1989.

Foote’s political career began as a Member of the House of Assembly for Grand Bank from 1996 to 2007. Then she ran federally and served two terms (2008-2015) as Liberal Member of Parliament for Random-Burin-St. George’s. From 2015 to 2017 she represented Bonavista-Burin-Trinity, and was appointed Federal Minister of Public Services and Procurement.

All the while, she was dealing with serious health issues. A two-time cancer survivor, Her Honour was first diagnosed 20 years ago and then again four years ago. Testing showed she has the BRCA2 gene, which means she’s susceptible to numerous cancers. Her children have tested positive as well (thankfully, they are both currently cancer-free).

“It’s one thing for me to have it; it’s another for my children to have it,” she says. The diagnosis meant a change in priorities, so in 2017 she made the difficult decision to step down from politics to spend more time with family. It was a job that she loved, she says. Fortunately, she was chosen for the position of lieutenant-governor, a role that allows her to serve again while staying close to her family.


The position of lieutenant-governor is non-partisan and a term typically lasts for five years. Her Honour, being the viceregal representative of the Queen in Newfoundland and Labrador, performs the monarch’s constitutional and ceremonial duties. Such standing comes with particular protocols that Foote is still getting used to. For instance, she’s supposed to be the first person to leave any official event - no one can leave until she does. And she is appointed a chauffeur, but Her Honour doesn’t wait for the driver to open the door for her. She hops right out. “But I’m getting there,” she laughs.


Foote brought her own sensibilities to Government House from the start. During her installation ceremony in May, Foote made women a focus, in part by including an Indigenous water ceremony - a ritual that can only be performed by women. “In this role, I think the message is there for young girls and women that you can be whoever or whatever you want to be. You just have to believe. But you have to work hard,” she says.

In the near future, Her Honour sees Government House becoming an epicentre for roundtables to discuss the various issues impacting society, such as mental health. She wants to bring together experts in the field and those living with mental illness. “I want to be able to help the government of the day, if they’re open to it, to bring together people and have an appropriate minister sit in on the discussion to hear,” she explains.

High on her list is making Government House a part of the commu-nity. She reminds us that former Lt.-Gov. Edward Roberts revived the annual public garden party. In her first summer, Foote introduced Yoga on the Lawn and Tai Chi on the Lawn, both of which were incredibly popular. And she has the exterior of Government House lit up to support various causes. In September she had it lit up blue in recognition of Sexual Violence Awareness Week.

The House sits on 22 acres of immaculately landscaped property that includes a greenhouse and stables for the Royal Newfoundland Constabulary’s mounted unit. More than that, Foote reminds others that the property isn’t hers, it belongs to the people. It’s a popular spot for downtown strollers and wedding photo shoots. Tourists also wander the grounds and used to step inside just far enough to sign the guest book, but Foote wanted them to explore it more. “This house is a gem and we need to share that history with anyone who will listen to us,” Foote says. So now there are tours of the house.

The new tour guides really relish in telling ghost stories, she laughs. Once she was going down the staircase while a guide was recounting a ghostly resident - a woman in white who might have been a previous lieutenant-governor’s mistress.

“And I’m halfway down the steps and I stop, ‘A ghost? No! There can’t be a ghost here!’” she retells. “So every night when I’m turning off the lights and walk up there by myself in the dark, a ghost is hanging out here.”

Apparently there are a few hauntings going on at Government House. While not a believer, Her Honour says, “If they’re here, they’re really friendly and I’m not gonna hurt them. But it’s all become part of the lore now.”

A House out of Time

Government House is the residence that comes with the job. Completed in 1831, it’s an impressive two-storey red sandstone home and a National Historic Site. It’s been the home of every lieutenant-governor since the start, and visiting British monarchs stay here.

Throughout the home there are portraits of past monarchs, nobles and lieutenant-governors, as well as the work of Canadian artists, like the late Mary Pratt. The desk Her Honour sits behind in her office has been used by every lieutenant-governor, “so that overwhelms me,” she admits. “The dining room table here that you see, that’s been here since the house was completed in 1831.”

Asked what her favourite feature of the house might be, she says there’s a lot but directs me to look up. The painted ceiling is the handiwork of polish artist Alexander Pindikowski. In 1880, he was arrested for attempting to cash forged cheques and was sentenced to 15 months in prison. For a reduced sentence, he put his paintbrush to several local buildings, including the Colonial Building and Government House. In four corners of the drawing room ceiling is the face of a woman said to be the maid Alexander fell in love with and married.

Her Honour then points out the chandelier hanging above. It’s Waterford Crystal and originally featured candles that had to be individually lit. “Isn’t that amazing?” she says. “It was all rewired to be electric.”

Government House is still a building of its time and doesn’t have air conditioning. And in winter the many fireplaces throughout the mansion will come in handy, Foote observes. But what might have been a bigger shock was that Government House didn’t have WiFi. “Four months ago there was no WiFi and I came in and I said, ‘No WiFi? I want to do roundtables. I want to bring in people who’re going to be away from their offices for two, three hours at a time. They need to be able to check in with their offices… You can’t say to them ‘You’re going to have to go to Coffee Matters [down the street] to check in with your office.’” WiFi has since been installed.

Having the Internet is necessary in this day and age, especially for someone who likes to get a lot of work done. A self-confessed workaholic, Her Honour starts early in the day and is often the last one to turn off the lights. “It’s four months and sometimes it feels like we’ve done so much in that four months,” she says. “It’s hard to believe we still have four and a half years to go.”