How a Young Entrepreneur is Using Fashion for Social Good 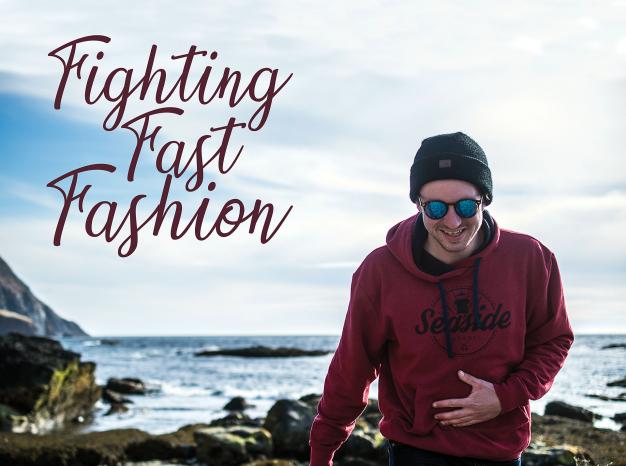 This young entrepreneur wears his environmental activism on his sleeve - and provides a fashionable way that you can, too.

The day of the 200th Royal St. John’s Regatta drew thousands of people to Quidi Vidi Lake. And at 30°C, it was a stifling hot day. The air was filled with the scent of food and the excited sounds of the delighted crowd. Some were there to compete, some as spectators, and others to promote charities or just enjoy the festivities. Trevor Bessette was there, but not on holiday. He was working the crowd from his booth, trying to raise awareness and support for his unique clothing line, Seaside Apparel.

Behind their trendy designs, fun colours and comfy fits, these t-shirts and hoodies are the products of a deep-rooted philosophy - sustainability. The clothes are environmentally friendly, made from recycled plastic bottles as well as cotton scraps that would otherwise have been tossed in the trash. Reducing waste is something that was top of mind for Trevor, a 21-year-old Memorial University student, when he started this company a year ago.

“Sustainable consumption is what it’s really about,” he says, “but it started off initially as a furniture brand, actually.” In 2017, he had just moved into a new place and needed a table, but instead of heading to a store he went out back and saw a broken fence. With his landlord’s permission, Trevor used that wood to build a makeshift table that didn’t look too bad. “And I kind of fell in love with the idea of taking old materials and giving them new life,” he says.

Soon after, Trevor started looking into fast fashion: trendy clothes that are produced extremely cheaply, making them easy to discard at the end of the season when they are no longer in style. It encourages over-consumption and contributes to plastic pollution.

“Now it’s, ‘Oh well, a T-shirt costs $10 and jeans cost $20: I may as well throw out this old pair and get a new pair.’ And along with that, the trends are coming out with new styles almost every week, so that people feel like they need to buy new things,” Trevor explains. He’d rather use high quality materials that cost a bit more but are meant to last, which will encourage people to mend their clothes rather than toss them in the trash. Also cheap clothing is often made by poorly paid people in unsafe working conditions.

In preparation for launching his Seaside Apparel line, Trevor hired a local artist to design the lighthouse logo, bought thrift-store shirts and paid a local company to print sample t-shirts with them. Next, “I found a company in North Carolina that was able to create the fabrics [from recycled plastics], and then the garments are cut and sewn in co-op manufacturing facilities in Haiti and Guatemala, which is great ’cause it gives employment down that way and fair wages,” he says.

Trevor calls Seaside Apparel a social enterprise, which he describes as neither for-profit nor non-profit. Instead, it’s in the middle, where the business needs to make enough of a profit to do green initiatives, like clean-up drives and recycling promotions. (For example, a portion of the profits made on Regatta Day will be used to buy recyclable bags, trash bags and gloves to use in a clean-up initiative.)

“The business is based around/created to serve the purpose of sustainable consumption, helping people and the planet every step of the way. At the core of our values is protecting the planet, but also protecting the people who are creating the products in the first place,” he explains.

In the next year he hopes to launch the Take Back Program, which recycles used clothing. “So I want to get, take back, those textiles at the end of their life and then upcycle them into new products and do that whole thing where you’re giving new life once again.”

Seaside Apparel’s zero-waste philosophy goes beyond the recycled ma-terial in the clothing. Trevor uses recycled cardboard boxes, paper bags, paper tape and even seed paper, which has seeds embedded in the paper that, if planted in the garden, will grow flowers that attract bees.

Currently Seaside Apparel is only sold online at Seasideapparelnl.com or at pop-up shops like the one at the Regatta. So far, orders have come in from as far away as British Columbia and the United States.

At the moment, Trevor is completing his Bachelor of Business Administration at MUN, but last year he was an Earth Sciences major before switching, and now he merges his interests in business and the planet. While he’s running the business on top of his studies, once he graduates he’d like to work on it full-time.

“I’d like to be able to live off a meagre salary but be making a big difference in my province - that’s the ultimate goal,” he says.

Trevor also hopes to bring more of the manufacturing side of the business to Newfoundland and Labrador, saying, “It’s definitely something I have on my mind and it’s a future goal and an important one I’d like people to know. I’d like to be able to bring jobs here to the province.”