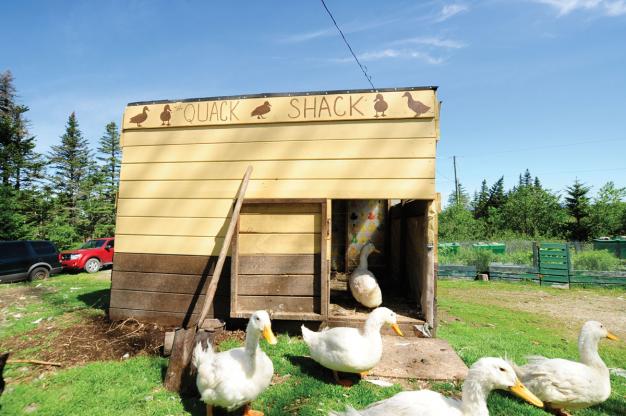 The late evening sun glistens on the ancient metal tines of the horse-drawn hay rake as seagulls glide in from the nearby harbour, swooping low to investigate. There rises the perfume of freshly mown grass as wooden-handled scythes are swung by strong men in unison. Soon the pony pulls at her harness; head down, pawing the ground, she is eager to go, and before long iron wheels roll across the meadow. When a pook of hay of sufficient size is gathered behind the rake, the driver lifts the rake to drop the load. They turn and repeat the process anew until the meadow is laid clean and closely shorn.

It is a fashion of farming almost as old as agriculture itself, and while you may think I’m describing a centuries-old scene, it was actually observed during a stop to photograph Newfoundland ponies at work in Bay Roberts in 2006. Stopping to chat with Kevin Dawson that day, he explained to me the significance of continuing to work this way in modern times.

“This is the hay meadow on our late father’s small farm. They used to call him ‘Farmer’ Jack Dawson, since he raised some sheep, pigs, goats, chickens, ducks, a few cows, grew his own vegetables and, of course, he always had a special place in his heart for the Newfoundland ponies…So we like to hook them up and do this particular meadow the traditional way when we can,” he said. “It is great exercise for both the ponies and us; we get to take care of the supply of hay for our animals knowing what they are eating is good, natural stuff; plus it lets us all feel close to our father and the land. If you don’t mind a bit of hard work, it is not a bad way to live.”

That desire to control the security and quality of our own food supply has enjoyed a resurgence in the province in recent years, with a boom in the do-it-yourself homesteading movement. Recently, I travelled to Mobile on the beautiful Irish Loop to chat with two people who are local leaders in that movement: Steve and Lisa McBride.

Steve is originally from Vancouver, British Columbia, but has been living in St. John’s for the past 10 years. He is best known (along with his partner, Lisa) as the owner of what he refers to with a laugh as the “Mobile Goats.” (Townies may remember the McBrides and their goats from their days living in the downtown area of St. John’s.)

“We homestead, which basically means we are concerned with the entirety of our food network. We are not quite there yet, but we take an active hand in growing our own

vegetables, foraging for our own fruits, collecting salt water from the ocean to make sea salt, keeping ducks for eggs, raising heritage turkeys, keeping rabbits, keeping goats for milk - from which we make yogurt, cheese, and even ice cream - keeping bees for honey and mead [a type of honey-based wine], and in the winter making our own maple syrup,” he shares.

But the couple didn’t start out as homesteaders - far from it. Not so long ago, they were working in corporate careers and admit they’d never grown anything or had any hand in their own food supply.

“It has been a voyage, learning things along the way,” says Steve. Walking around their property, it’s evident how far they’ve come. I tell them the place is a “hive” of activity. Steve and Lisa tolerate my bad joke, a reference to the bees buzzing around us. They figure there are roughly two million bees on their land, providing not just honey and wax, but also an invaluable service as pollinators of plants.

“Some studies say you will get about 20 per cent more yield on plants where there are beehives nearby,” explains Steve. “That is significant for harvesters, and of course the bees love bakeapple, blueberry and cranberry blossoms, so Newfoundland is prime territory for this in some ways.”

And the McBrides don’t just reap rewards from the land around them, they also find good things in the sea.

“We gather the water, filter it to get any minor imperfections out, and then allow it to evaporate in pans in the greenhouse in the summer or on the woodstove in the winter. It leaves behind this really nice sea salt we harvest for all our recipes and cooking,” says Steve. A five-gallon bucket of seawater yields about a pound of salt, adds Steve, and because of its superior quality and the way it crystallizes, you can generally use about 30 per cent less in your seasoning than regular table salt.

Of course, a lot of hard work goes into procuring honey and salt (and a myriad of other foodstuffs) the way the McBrides do, and Steve admits there’s a lot involved with the lifestyle they lead. He says when a particular task becomes boring or tiring, they simply shift gears and tackle a simpler job for a while.

“But it is all productive work and you can see the good in what you are doing, which makes it all enjoyable and appealing to certain people,” he says. That appeal is evident in the increasing requests the McBrides see for workshops and information on homesteading.

After learning a few tricks on their own, the McBrides created the Facebook group “Backyard Farming & Homesteading NL,” a place where people who share their interests can exchange knowledge. As of July 2018, the group had grown to 11,000 members.

This month, to further address the demand for homesteading help, they are teaming up with some 20 presenters to offer “Homestead-a-palooza,” set for September 16. The full-day event will take place at the Colony of Avalon in nearby Ferryland and will include introductory workshops covering a diverse range of topics - everything from foraging for food to keeping bees and making honey, cheese, mead, sea salt etc. Folks can also learn about raising backyard chickens, growing fruit trees, and dying and working with leathers and sealskins, plus lessons in a host of other traditional crafts and food skills. (Stay tuned to the Facebook group for pricing and additional details.)

“When you consider the fact that Newfoundland imports approximately 90 per cent of its food, then that is an astonishing number. Also, when you think about what is happening to food prices, anything we can do to improve our food security has to help,” says Steve.

For the McBrides, it’s been an amazing journey, though it hasn’t been without  challenges. They are pleased to see the amount of food that can be grown here.

Near the end of my tour, I ask if there is anything missing from their homestead. Lisa says with a grin, “We have a fun rule on the farm that everything here pays a rent of some sort; the bees give us honey, the goats give us milk, and the ducks give us eggs and so on. The only thing that does not give rent is the cat, but the cat was with us before we started, so that makes the cat exempt. We are missing a horse, but we are not quite ready for one yet. We would both love to have a horse to work the ground and do some general chores. Maybe someday.”

I smile, thinking to myself of Farmer Jack Dawson, long departed from his days of plowing his pastures. And I imagine the deal he would have given the young homesteaders on a Newfoundland pony if they ever decided to see a man about a horse.