Comedian Steve Coombs brings his cancer story to the stage 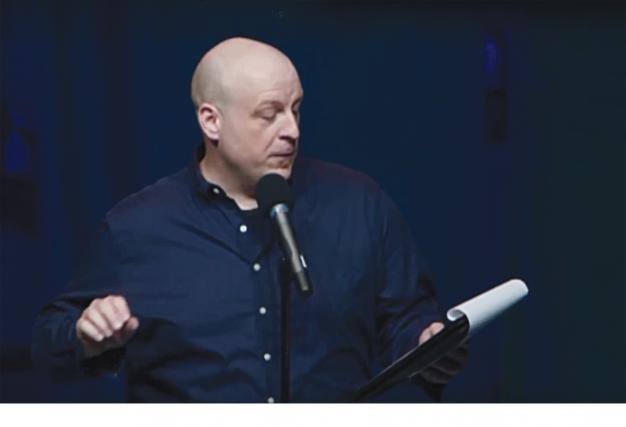 Like many Newfoundlanders and Labradorians, Steve Coombs likes having (and giving) a laugh. A database analyst by day, the Townie, husband and father of two has been making a splash in the local stand-up scene (check out his reading of “50 Shades of Bay” on YouTube and you’ll see why).

Always one with a knack for tickling the funny bone, Steve made his official comedy debut in 2008, at the Newfoundland Screech Comedy Festival, after answering a newspaper ad seeking participants for a two-day stand-up workshop. While he’d never really tried “writing” a joke up until that point, he says, “I got a punchline probably two hours or so before the show, when I went home, in the bathroom - which is where most punchlines come from.” Putting nerves aside, he did the schtick, got the laughs, walked off stage and “got the bite.”
A decade later, he’s still at it. Since his debut, Steve has shared the stage with brazen Bluenoser Nikki Payne, toured across the island with Corner Brook’s own Trent McClellan and represented the province at SiriusXM’s Top Comic Competition (where he also snagged a spot opening for Canadian comic legend Russell Peters).
Like all good comics, Steve aims the microscope at the minutiae of everyday life and notices the funny little things that many of us miss. His easygoing nature, self-deprecating humour, and musings on married life and the inadvertently hilarious things his kids say have earned him praise far and wide. It is this same “take it as it comes” attitude and his ability to poke fun at himself that has also helped carry him through one of the most trying times of his life.

A Bumpy Ride
About three years ago, after regular stints performing at the (now defunct) Yuk Yuk’s comedy club in St. John’s, Steve decided it was time to do his own comedy tour. However, as they say, life had other plans -  the kind of plans that would send most people into a tail-spin. It’s a time that Steve remembers all too well.
“It was the day before Father’s Day [2015] and we had the kids out for my daughter’s soccer kick-off. And it was probably the first day in weeks that I sat down across the table from Ange [his wife] because we’d just been so busy…and Ange looked at me and she said, ‘Your eyes are some yellow,’” Steve recalls.
Other than feeling tired and his stomach feeling “off” (“I thought it was nerves because I had a show coming up,” Steve explains), he had no reason to suspect anything out of the ordinary. But on June 23, after an emergency CT scan and blood work, the tests confirmed he had a tumour, the size of a tennis ball, wrapped around the head of his pancreas (suspected to be pancreatic cancer). All of a sudden, at the age of 42, life came to a screeching halt.
On July 3, Steve underwent a complex, roughly seven-hour surgery, known as the “Whipple procedure,” which removed the tumour, the head of the pancreas, the first part of his small intestine, 18 lymph nodes, and a portion of his stomach, gallbladder and bile duct. In an unfortunate coincidence, it is the same procedure his late sister had 17 years to the day that Steve was diagnosed. (Ann Marie passed away from stomach cancer in 1998 at the age of 29, leaving behind her husband and 14-month-old son.)
“As soon as I found out I was sick, I looked at Ange and I said, ‘What am I going to tell Mom and Dad? What am I going to tell the girls? Tell Mom and Dad they’ve got to bury another child? Tell the girls they’re probably going to lose their dad?’” Steve recalls. (His daughters, Sarah and Anna, were 8 and 4 respectively at the time.)
To help cope with the complicated emotions such a diagnosis brings, Steve began writing down notes and jokes, and anything funny that happened at the hospital, “trying to keep myself as positive about it all as possible,” he says, “because when I first heard ‘pancreatic cancer,’ that usu-ally doesn’t have a happy ending.”
On July 27, Steve received some unexpected good news when his pathology report indicated that he didn’t have pancreatic cancer, but rather, a rare, neuroendocrine tumour (a slower, less aggressive cancer with a much higher survival rate). Three weeks later, when he went to his oncologist to learn about his treatment plan, Steve says, “I was told, effectively, you’re cured.”

Back in the Saddle
While Steve’s cancer journey lasted all of two months, the “mental fallout,” he says, lasted much longer.
“I started to see a counsellor regularly at the cancer centre...Right around the six-month mark, I just sat down one day, wrapping Christmas presents with Ange, and it just hit home...just getting upset, crying. I went in to see my family doctor and I was like, ‘What’s going on?’ He said, ‘Well, what happened six months ago?’ It was basically that feeling of walking off the curb and feeling the wind go by and going, ‘Jeez, that truck just nearly took me out,’” Steve explains.
Unfortunately, his journey wasn’t over. In September 2016, Steve discovered the cancer had returned in a small lymph node, which has since been removed. He is now being monitored while hormone therapy for cancer continues.
Steve says he’s incredibly grateful for the care and support he’s received from his medical team, the comedy community, his friends and, most importantly, his family. Initially afraid of how his young daughters would handle the news of his diagnosis, Steve says they continue to amaze and inspire him. His eldest daughter, Sarah, recently joined him for the Great Cycle Challenge to raise money to help fight childhood cancer. She also recently picked her dad as the subject of her “hero” project at school. (“She said, ‘I chose to do you - or Isaac Newton,’” Steve laughs.)
After taking a break from the stand-up world to rest and recover, Steve’s spirits are now high and his health is in good shape. This fall, he’s sharing his story on stage during three shows (September 24, 25 and 26) at the LSPU Hall in St. John’s. “Here & Now” (originally titled “How Cancer Saved My Life”) will be part stand-up set, part one-man show and will tackle some of the stereotypes around people’s expectations of those who are dealing with a cancer diagnosis. But, Steve says, “It’s not a morbid affair.” (The laughter he received during the initial read-through last fall, he says, is a good indication of the feel of the show.)
When all is said and done, Steve says, the show is really a song of praise to his family and those who have stood by him - and if you look closely at the show’s poster, you’ll see those elements sprinkled everywhere. Even the blue paisley background is an homage to his sister’s bandana (which he now carries in his pocket, like a good luck charm, when he does a show or has another important event coming up).
To pull the show together, Steve consulted with several of his peers in the arts community, including Andy Jones, and worked with director Charlie Tomlinson, who helped him bridge the world of stand-up comedy and theatre. He also received funding from ArtsNL through their Professional Project Grants Program. Wanting to make something positive out of his experience, Steve says working on the show has been therapeutic and he hopes it’ll help others who have been touched by cancer.
“When I did my reading, one of the people I had invited, their partner was there. And this person had a cancer experience. He was very emotional at the end of it, and he was like, ‘You know, I didn’t want to come. But I’m so glad I came.’ And he gave me a huge hug…even now, I’m getting goosebumps because it impacted someone that much,” he says.
“I’m still here, so it ends on a nice, positive note,” he smiles. “And there’s a lesson in there. It sounds cliché or corny to say there’s a lesson in there, but there is.”