It's a sunny spring day in downtown St. John's, warm enough that Jerome Canning has left the door to his workshop wide open. A portable thickness planer is pointed at the opening. Behind it, an in-progress sideboard rests on the floor. It's a beautiful piece, well proportioned, thoughtfully designed and finely crafted. Worthy of an art gallery, it will be cherished for generations.

Today, though, Jerome’s attention is focused on the other side of his shop, where an overturned wooden punt rests on a stand.

For decades now, Jerome has made a living working with wood as a furniture maker, cabinetmaker and boat builder. Lately, boats have taken up most of his time - he’s been teaching a boat building class at Memorial University over the winter and building the punt in his shop. In the summers, he’s the resident boat builder at the Wooden Boat Museum of Newfoundland and Labrador in Winterton, where he instructs courses, builds boats, and shares his knowledge and stories with visitors.

He built his first boat back in the ’70s with his family to go fishing, then built more, then studied naval architecture at the Fisheries College (now the Marine Institute) and has continued to build boats through the years. One of them, a half-scale model, is in the lobby of a St. John’s office. That boat is where our story begins. Or rather, where we are going to begin our story, for it goes way back. This is the long row, a story that stretches out for centuries and goes on for miles.

Jerome, despite building dozens of boats, doesn’t own a boat - until he built this one, the boat that sits upturned, nearly finished, in his workshop. It’s a traditional Newfoundland rowboat, a punt. That it be a rowboat was important - he wanted to feel connected to the water in the way that a motor couldn’t provide. And he wanted to row a Newfoundland boat of his own design, built on the province’s deep boatbuilding tradition. 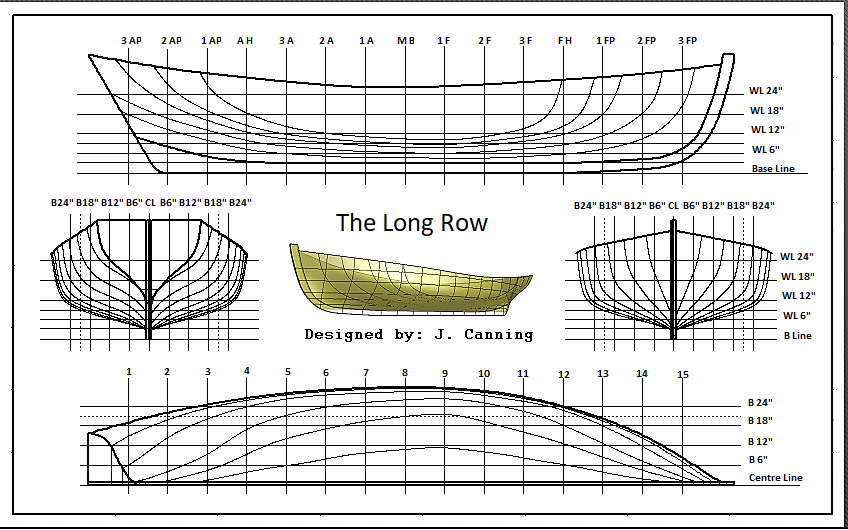 “I knew if I could keep certain angles, certain types of dimensions, proportions, that…I could actually feel comfortable saying that I designed and built and am rowing a punt that is a Newfoundland punt,” Jerome says.

The Path to the Punt

Before the design began, though, Jerome had to define for himself exactly what a Newfoundland punt really was. As people moved back and forth between Newfoundland, Nova Scotia, New England and other places, they brought their ideas and boats with them. The Cape Island boat of Nova Scotia became popular in local waters. The Grand Banks dory made its way to harbours from Halifax to the Bay of Islands, evolving for the unique needs of each community. And so it is for the punt, whose shape evolved over time. Jerome would have to go to the source. He would build a boat using the same methods as 18th-century boat builders.

The Newfoundland punt, like the Whitehall - that famous American rowboat of New York’s harbour - has its roots in the workboats of England. The first settlers of Newfoundland brought their boatbuilding methods and their boat shapes with them using a technique known as the adjustable mould or whole mould method. It uses a notched, straight stick and two curved sticks to create the shapes for the frames of a boat. By using the whole mould method to design and build his boat, Jerome figured, he would be closer to building a boat like those of his forebears.

“If I use the whole mould method then I know for certain that the punts that came over here first…I’m going toward that punt,” he says.

He also looked at the boats in the Wooden Boat Museum’s documentation program. Each year, a crew from the museum heads out to gather the oral histories of the province’s boat builders and lift the lines off their boats, some more than 100 years old. It was during one of these trips that Jerome met Jack Casey, an old timer who showed Jerome how to use the whole mould method to get the midship bend.

“But I wasn’t satisfied with that because I didn’t want to do just one frame,” he says. He had heard of Samuel Andrews, a Winterton boat builder who’d died in the 1960s, and how he used to get every frame for his boats using the whole mould method. Jerome knew it could be done and set about researching how to do it.

For the shape, Jerome chose a trio of boats - a Fogo Island gunning punt, a Samuel Andrews gunning punt and a Marcus French rodney - to base his design on, while also consulting other boats. He looked at the length to width ratio, the angle of deadrise, the angle of the transom, the shape of the hollow, and made sure his boat had similar lines as he shaped it up, beginning with models and plans before moving on to the build.

The first couple of times, he didn’t like the look - and in a boat, looks matter. “And all the time you’re looking at it, because you’ve got to trust your eye [that] she was looking good,” Jerome says. “You draw it on paper; you make a model. The boat had to look good, that nothing sort of looked clumsy, that it had a nice, suent look.”

By the third go, he had a drawing and a model he liked. But he wanted another opinion. He sought out those who spend time on the water. “In particular, people who use row boats because this is a row boat,” says Jerome, “and everyone said ‘B’y, she’s fine.’”

This brings us back to the start.  Jerome landed a contract to build a half-scale model boat to display in the lobby of Maderra Engineering, giving him the chance to see a larger version of the boat and assess its lines before committing to a full-scale build.

“And the whole time building that,” says Jerome, “I was sizing it up, and a lot of people saw that boat and said ‘Nice looking boat,’ so I’m hoping that that’s what it will be. Only the water will tell.”

He’ll have plenty of time in the water this summer, rowing Placentia Bay with his son, then on a multi-stop trip in Conception Bay or Trinity Bay - the details are still being worked out - in a series of short rows with various rowing partners.

This boat, built from traditional shapes, is really a fishing boat; that’s what the old boats were used for and that use affects how it handles. Used as a recreational rowing boat, it will need some extra weight in her to settle into the water the way she would if laden down with fishing gear.

Mile after mile, along the coast, into each harbour, a couple of hours at a time, over several weekends, Jerome will get a good sense of the boat while sharing the rowing experience with folks he’s invited along to  join his adventure of the long row. It is only then, out on the water, when he will know for sure what he has created. Because although good looks are important, a wooden boat must handle as well as any other boat when on the water.

Which brings us to the final question for Jerome: Why? Why build a wooden boat in the age of fibreglass? Why cast back centuries for the build method? Why boats, instead of houses?

“The why is probably just sort of who I am. I came from this tradition,” he says. “I’m a Newfoundlander. I’m building a Newfoundland boat and I’m building it with a method that came over with our first European settlers. I’m using the method they used. It’s sort of a celebration, for me, of being here in this place. So I’m going to try to reflect that in every way.”