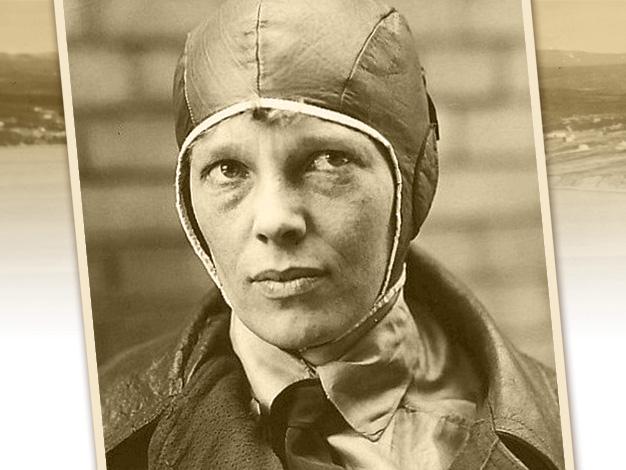 To read the first installment of this series, click here.

The tri-motor Fokker 7 seaplane, Friendship, with Amelia Earhart, Bill Stultz and Slim Gordon on board, landed at Trepassey Harbour on June 4, 1928. The crew planned to spend the night and take off for England the next day. But as they sometimes do, plans changed.

Next morning a northwest wind gusting to 30 knots kept them moored to the buoy. Trepassey Harbour was very narrow, with high hills on the western shore opposite the town and at the head of the harbour. The only way the plane could take off was down the length of the harbour into a southwest wind. They would need a northwest wind once they were in the air, but not before takeoff. All their observations made them uneasy.
The wind continued from the northwest and by afternoon was blowing a gale. Stultz and Gordon used the time to work on the plane. The radio had been cutting out and the oil tank had a small crack. Amelia sent telegrams to George Putnam regarding their progress.
On the one hand, they had only lost a day of flying. On the other hand, the delay gave Mabel Boll and Thea Rasche a chance to get into the air ahead of them. The two women were flying “land” planes that didn’t have the problems a seaplane had with the takeoff. Land planes were faster, could carry heavier loads and were free of the heavy pontoons that had the tendency to “stick” to the surface of the water, especially when it was calm. It was enough to make the Friendship’s crew wonder if they’d chosen the right aircraft for their mission.
Although Thea Rasche prepared quietly for her flight, Mabel Boll was all about the publicity. She was loud, flashy and bold - the exact opposite of the woman Amy Guest wanted as the first to cross the Atlantic by air. A few months earlier, something had happened that increased Boll’s determination to beat the Friendship into the air.

Bill Stultz had been hired by Boll and her backer, Charles Levine, to fly them in their plane, Columbia, from New York City nonstop to Havana, Cuba. Following the flight, Boll claimed she had hired Stultz for her proposed transatlantic flight and she thought he had accepted. What transpired between them is speculation. What is known is that Commander Byrd encouraged Stultz to accept Amy Guest’s offer because he felt it had a better chance of success. Stultz himself said Boll’s enterprise “smacked of the circus and unprofessionalism.” Whatever the true story, Amelia, Stultz and Gordon knew Boll was a threat.

They also knew she wouldn’t sit still for long. She and Levine hired Oliver Le Boutillier as their pilot and Arthur Argyles as copilot to fly the Columbia. On June 5, while the Friendship sat at Trepassey Harbour, the Boll crew waited at Roosevelt Field in Boston for the weather to improve. They planned to take off for Harbour Grace, Newfoundland and then on to England.

June 6 was sunny and crisp, but the wind in Trepassey Harbour still blew from the northwest. It began to swing to the south, but James Kimball, at the weather office in New York, reported heavy rain, fog and high winds off the coast of England. They weren’t going anywhere that day. Later that afternoon, a New York Times reporter in Trepassey told them Boll was planning to take off from Roosevelt Field the next morning.

Although the weather had improved by the next day, a new problem arose for the Friendship crew. They discovered a hole in one of the pontoons. Once it was repaired, they made three attempts to take off, but all failed. Back on shore, they got the news that the Columbia had taken off from Roosevelt Field but had turned back due to fog. Worse, in Amelia’s mind, was the news in the St. John’s Telegram. Thea Rasche’s plane was being delivered to Curtis Field on Long Island and within three days, she would be on her way to Berlin.
The next few days brought no improvement in the weather in Trepassey. Amelia wrote in her log, “Our competitors are gaining on us by delay. Rasche is the one to fear. I wish we’d have a break.” They didn’t get a break and, in fact, it seemed as if a pattern had been set. When the weather improved, there were problems with the plane - a leak in the oil tank, saltwater in the motors, and pontoons that refused to “let go” of the water. When the plane was ready to go, the weather closed in.
Just when it seemed things couldn’t get worse, another problem arose. Some reporters in Trepassey had alcohol with them. Stultz and Gordon began spending the evenings with them and wandering home in the wee hours of the morning. If the weather kept them on the ground, they slept most of the day.
Amelia’s mood was very low. She wrote in her log, “Job had nothing on us. We are just managing to keep from suicide.”
The worst news came on the evening of June 12. Boll had landed in Harbour Grace, where she was greeted by the whole town and taken to Cochrane House for dinner and a reception. Her pilot, Oliver Le Boutillier, announced they’d rest for a day or two, then “tackle the Atlantic.”
On Wednesday, June 13, the Friendship made four more attempts to take off. Even with a lightened load of gasoline, the plane couldn’t lift off the water. They briefly considered a shorter flight to the Azores, which required less fuel. They could refuel and continue to England. But the organizers and crew felt there were too many unforeseen dangers to implement that option.
One piece of good news arrived that day. A dispute over the ownership of Thea Rasche’s plane had forced her to pull out of the transatlantic race.
Another three days of bad weather kept the Friendship moored. During this time, Stultz’s drinking remained a concern. Amelia wrote, “Just now the boys are at Paddy Morton’s and I know the liquor flows.” Then on June 16, Kimball opened a small window of hope. He reported a storm over the Atlantic, “slightly to the south of their route.” He gave them a conditional okay to start the next day.
The following morning, Amelia concluded it was now or never - even though Stultz was hungover from  the night before. She and Gordon filled Stultz with black coffee and she practically dragged him into a dory and onto the plane. Reporters at the scene overheard her arguing with Stultz, but all agreed Amelia appeared firmly in control.
At 11:15 a.m., after two unsuccessful attempts, Amelia decided to lighten their load even more. Byrd had suggested 830 gallons to reach England, but with a tailwind Stultz and Gordon agreed they could cross the Atlantic with 700 gallons and reach Ireland.

On the second run with their lighter load, Amelia watched the airspeed indicator as it slowly climbed. “Thirty - forty - the Friendship was trying again,” she wrote in her log. “A long pause, then the pointer went to fifty. Fifty, fifty-five, sixty. We were off at last.” At last, on June 17, 1928, the Friendship left Trepassey Harbour. Finally, Mike Jackman could send Amelia’s coded telegram to George Putnam. “Violet stop cheerio,” meant they were on their way.

When Boll heard the Friendship had left, she was stunned. Her pilot had considered the weather report to be only fair and decided to wait for a better one. Boll claimed James Kimball had given them a different weather report than the Friendship received - something Kimball denied.
The weather report had only been fair, but Amelia was the difference. On Boll’s plane, the pilot made the decisions. On the Friendship, that responsibility was Amelia’s. Twenty hours and 40 minutes after leaving Trepassey, Newfoundland, Amelia, Stultz and Gordon landed - not in Ireland, but in Burry Port, Wales.
But Amelia wasn’t finished with Newfoundland yet. She had only been a passenger on this flight. Next time she wanted to fly the plane herself. Four years later, on May 20, 1932, she would be back in Harbour Grace to do just that. - By Heather Stemp

Tune in next month for the details of Amelia’s solo transatlantic flight from Harbour Grace.