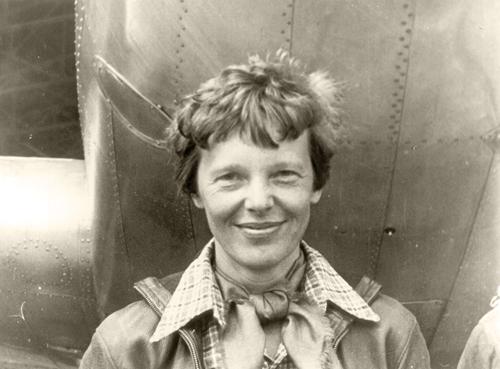 On June 4, 1928, a huge Fokker 7 seaplane approached Trepassey Harbour. It circled twice before landing on the choppy water. On board were the pilot, Wilmer (Bill) Stultz; the co-pilot and mechanic, Lewis (Slim) Gordon; and a young social worker from Boston named Amelia Earhart.

This was how Amelia Earhart’s arrival in Newfoundland was reported. But these few sentences were just the tip of the iceberg. Below the surface lay a much bigger story, filled with secrecy, intrigue and daring.
For example, Amelia wasn’t supposed to be there. Amy Guest, the wealthy American socialite who’d organized the flight, planned to be the first woman to cross the Atlantic by air. She’d leased the Fokker 7 tri-motor seaplane when Commander Richard E. Byrd, the famous Antarctic explorer, decided it wasn’t ideal for his next expedition. She then hired Stultz and Gordon as her crew. She named her plane the Friendship, a symbol of the good relations between America (her birth place) and Britain (her husband’s home).
That was when fate stepped in. Amy’s family had lived through her fox hunting and African safari days, but now she was a middle-aged mother of grown children. They and her husband drew the line at the transatlantic flight. They refused to lose her to the icy waters of the North Atlantic.
Amy reluctantly turned the search for her replacement over to her American lawyer, David Layman, with the following criteria: “I am determined that an American shall be the first woman to fly across to England. Someone nice who will do us proud…a lady, educated, and if possible, a flyer.”
David accepted help from New York publisher George Palmer Putnam and Boston public relations specialist, Hilton Railey. Putnam had extensive experience in planning expeditions and then publishing books about them. Railey had a network of reliable sources.
Railey called a good friend, who was familiar with the Boston aviation scene, for a recommendation. His friend knew of “a young social worker who flies.” Railey called Amelia and arranged a meeting. He was impressed with her and directed her to New York to be interviewed by Amy’s lawyer.
George Putnam met Amelia first and, by all accounts, she impressed him very much. He took her to David Layman’s office for her first formal interview. He was satisfied that she fulfilled the criteria Amy had given him. After meeting Amy’s brother, John Phipps, Amelia was offered the last seat on the Friendship.

Even though she was just the passenger, the flight’s organizers took a bold step. They made Amelia flight commander. They felt it was important for her to be in charge, since the purpose of the expedition was to demonstrate a woman was capable of flying across the ocean. Layman prepared a letter addressed to Stultz, Gordon and anyone else concerned, which stated in part, “This is to say that on arrival at Trepassey of the tri-motor Fokker plane Friendship, if any questions of policy, procedure, personnel or any other question arises, the decision of Miss Amelia M. Earhart is to be final. That she is to have control of the plane and of the disposal of the services of all employees as fully as if she were the owner.” Their decision would prove prophetic.

The Friendship was moored at the Jeffrey Yacht Club in East Boston, but Amelia had to stay away from the plane. David Layman and George Putnam told her the flight had to be kept secret. Female competitors, namely Mabel Boll and Thea Rasche, were planning their own transatlantic flights that summer. The two men decided that no announcement would be made about Amelia’s flight until the Friendship had taken off for Trepassey.

After writing her will and letters to her parents, and packing a small bag, Amelia joined the men in the predawn hours of June 1, 1928. Their first attempt to leave Boston failed due to lack of wind. The big seaplane required the correct combination of wind, speed and weight to get off the water, and on that day the combination eluded them. Their second attempt, on June 2, was cancelled because of fog.

On June 3, they again took the ferry to the Friendship and boarded. Slim Gordon stood on the pontoons and cranked the starboard, port and then centre engine. He scrambled back into the plane and they began their takeoff run. They had to attain 50 miles an hour for liftoff and again they failed. The day dawned warm and clear with a good breeze, so they knew the problem was weight. The crew deplaned 6 five-gallon cans of gas and, at 42 pounds lighter, tried again. The plane was still too heavy to lift off.
Since they couldn’t eliminate more gas, the auxiliary pilot who was accompanying them as far as Newfoundland offered to stay behind. Removing his weight of 150 pounds made the difference. The plane lifted off the water and disappeared into the morning sun. They were on their way to Trepassey - or so they thought.
By the afternoon, fog had settled over Nova Scotia. They had to overnight in Halifax, but how were they going to keep Amelia’s presence a secret? Stultz and Gordon went ashore with the flight sergeant who had come out to meet them from the seaplane station. Amelia remained on board. The only accommodation they could find for the three of them was in Dartmouth, across the harbour from Halifax. They returned to the plane, picked up Amelia and hurried to the hotel. Amelia went straight to her room, while the men went out to look for food.
By breakfast the next morning, the secret was out. The New York Times wrote, “Boston Girl Starts for Atlantic Hop, Reaches Halifax, May Go On Today.” The Herald Tribune said, “Girl and Stultz on Atlantic Flight Halt at Halifax; Going On Today.” Amelia, Stultz and Gordon managed to get free of the reporters and took off at 9:30 a.m. After a flight of four hours and 24 minutes, they circled Trepassey harbour twice before landing on the choppy water. A flotilla of dories came out to meet them. In each, a man stood swinging a rope to lasso the plane and tow it to a mooring. Amelia called them “maritime cowboys.”

Fred Gill, the town magistrate, and his two sons picked up Amelia and Bill Stultz and rowed towards the dock. In the distance, Amelia saw young girls dressed in white pinafores running down the hill to the shore. She thought they must have been dismissed from school to meet the Friendship. Later, she found out they had simply jumped up and run out when they heard the plane. The nuns were not pleased by the girls’ behaviour, nor by the trousers Amelia was wearing when she stepped out of the dory.
After making sure the plane was properly moored, Slim Gordon joined Amelia and Bill at the dock. They were officially greeted, photographed and interviewed by the press. The story of their flight had been announced by George Putnam. He was very aware of balancing the secrecy of the flight with the need for publicity once the Friendship had left Boston.
Accommodation for the flyers was arranged with the Devereaux family. Richard and Fanny owned a small two-storey house with an attached general store. Amelia had her own bedroom, Bill and Slim shared a room, and Fanny and Richard slept in their own room. The Devereaux children were sent to relatives to spend the night.
The flyers planned to refuel the Friendship that afternoon and leave the next morning, but a northwest wind began to blow down the harbour and it was impossible to load the gasoline. It would have to be done in the morning.
Meantime, Amelia walked over to Mike Jackman’s house/telegraph office to send a telegram to George Putnam: “Good trip from Halifax. Average speed 110 m.p.h. Motors running beautifully. Trepassey Harbour very rough. Three hundred gallons of gasoline were loaded today. Everybody comfortably housed and happy.” - By Heather Stemp

This is the first of a multi-part monthly series on this heroine’s historic travels, the adventure and intrigue, and Newfoundland’s role in her journey to fame. Click here to read the second installment.