The Fairy Month of May

This fairy, sculpted by Morgan MacDonald, lives in the Faerie Garden on the roof of the Cupids Legacy Centre in Conception Bay.

It was never anything that was written down in a book or pronounced in church or you learned in school. It was simply something that was a known thing,” says Tony Flynn, 76, of Colliers, NL. “May was the fairy month. It was passed from grandparents, to parents, and on to children by word of mouth as far back as anyone could remember.”

It was from Tony, my father, that I learned about fairies and fairy month. The things he told me are strikingly similar to the warnings and fables I’ve heard from others in my hometown of Colliers and neighbouring communities through the years.
Most people I’ve talked to about fairies in Newfoundland agree that these woodland imps immigrated here with Irish settlers. My father says it’s likely the grownups used the fairies to explain things that were foreign to them in this new country. “It must have come over with the first Irish settlers in this area, and the stories of the fairies were really just ways of explaining odd things or events in nature that didn’t seem to have a logical explanation at first glance. They always loved old stories and songs, so the fairies survived here as a form of entertainment, but also a way of passing on a bit of a serious warning to young people on how to conduct yourself out in the woods or near water or cliffs or the outskirts of communities,” Tony says. “It was easy to get lost berry picking in the fall or to take a tumble off a hill or a cliff in the spring when the weather was unpredictable, the ground was not solid and pond ice unsafe as it melted away. So watching out for the fairies or the unknown in potentially dangerous areas where young people might have otherwise let their guard down helped children be aware of their surroundings and stay safe.” He adds, “The fairy stories probably saved more lives over the years than we may ever know.”
The fairies (a.k.a. “little people” or “good people”) that evolved here have individual personalities. Some may be helpful; others are known to be mischievous, even malevolent. You’d be wise to never offend them or damage their fairy ring (a conspicuous but naturally occurring ring of trees, bushes or flowers), lest you be led astray. Protections against being taken include such things as tossing a glove into the centre of a fairy ring, carrying bread in your pocket, wearing an item of clothing inside out, carrying a religious medal and not wearing red.

Linda Corbett of Colliers recalls how her nan, Alice McGrath, had the younger ones terrified to be out after dark with her dire warnings of fairies. “May was indeed the fairy month, and she used to make us carry bread in our pocket if going out after dark. We’d also turn our inner T-shirts inside out so the fairies wouldn’t take us. She would warn us not to go into the garden after dark or the fairies would get us,” Linda says. Her nan was a great storyteller, and this particular fairy story will give you chills.
“One particular story she told was about her cousin, Bride Doyle. Bride was Tom and Bess Doyle’s sister and lived next door…According to Nan, Bride was in the kitchen...one day and her mother was knitting. A ball of yarn fell on the floor and Bride got down under the daybed to retrieve it. When she got up, her face was all distorted and she couldn’t speak. The common belief was that a fairy poked her.”
Bride died in childhood, and something strange happened when the poor child’s body was being driven to the cemetery by horse and carriage. “At the end of Doyle’s Lane at that time, there was a drain which ran across the road before reaching Harbour Drive proper. When the horse and carriage reached this spot, the horse refused to cross over the drain. The pallbearers proceeded to carry the casket over the drain and attempted to get the horse to follow. When the men lifted the casket, it was an extremely heavy weight - far too heavy for the small body held inside. Lore has it that they proceeded over the drain and the casket immediately lightened. The horse then proceeded over and the casket was carried by carriage the rest of the way to the cemetery without issue. The common belief is that the fairy which poked Bride while she was retrieving the ball of yarn was in the casket with her and couldn’t cross over the water. When the casket was carried over the drain, the fairy stayed on the other side.” 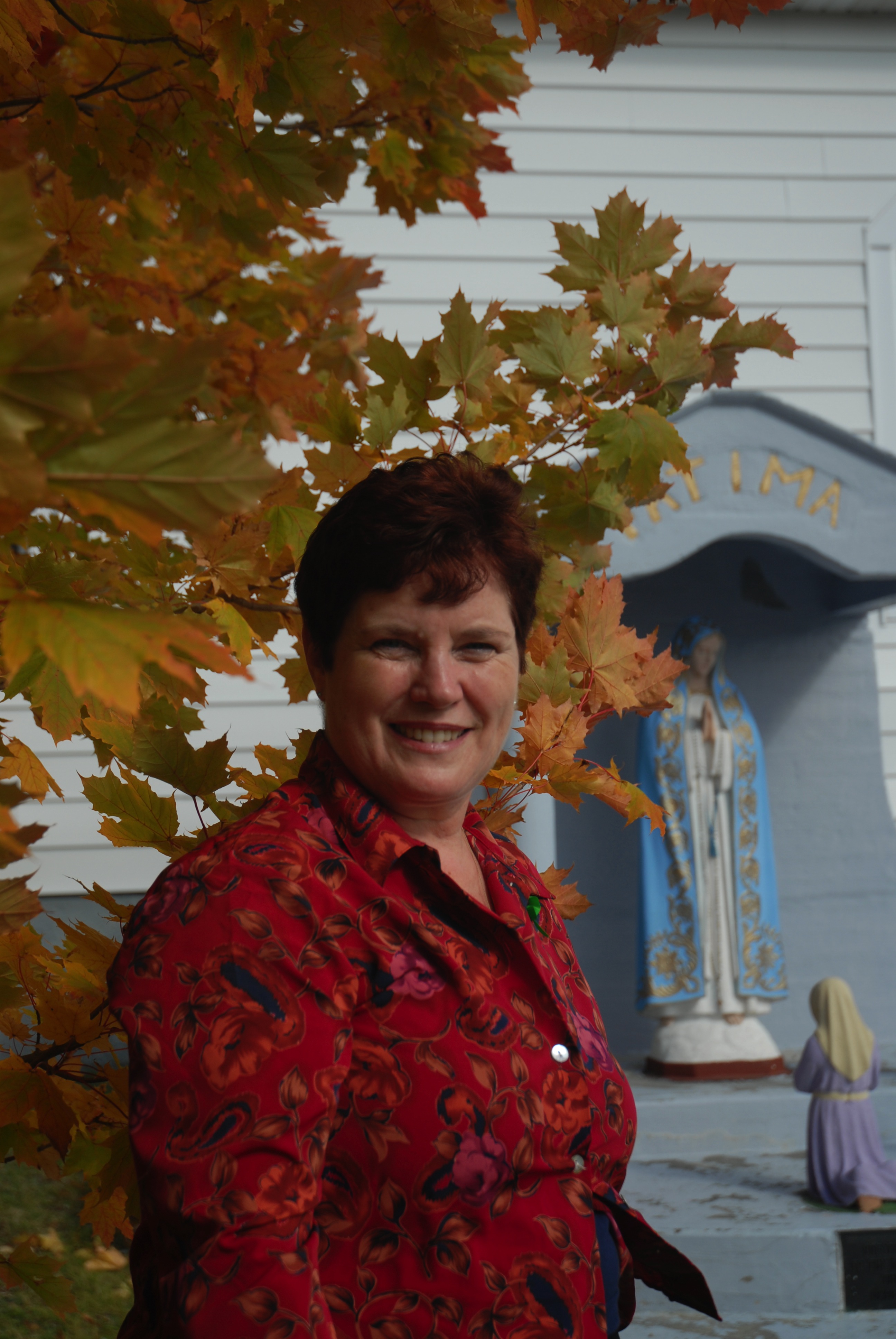 Barbara Murphy’s grandparents instructed her on the way of fairies, too, while she was growing up in Colliers in the 1950s and ’60s. “They spoke of the fairies as a means of warning and great fear, not in a melancholy way or with any fondness,” Barbara (pictured left) recalls. “The fairies were very active in the spring, and the month of May in particular, and the children were warned not to go too far from the house, especially to a wooded area or a hillside mountainous area, for fear the fairies would get you. You were to wear a medal or some sacred icon to ward off the fairies, or to have a piece of bread in your pockets. We never went with the bread idea as there were too many mouths at home needing the bread, besides the chickens, the pig, the horse, the cow and the sheep, so the fairies didn’t get any bread from us. We did, however, don a medal in the month of May [and a different one in June].” Additionally, her brother was warned to stay away from Bat’s Hill in Colliers, as the fairies there might get him, and back in her day, newborn babies were not to be left alone outside or laid on a blanket on the ground, for fear the fairies would take them.

Barbara says, “When we moved into our new house in the month of May 1975, my husband’s grandmother almost cried and begged us to wait until the month was over because to move in May was to move with the fairies. We did, however, move and there are days when I still wonder if I’m ‘in the fairies,’” she adds with a smile.
A couple of Conception Bay folk have stories linking fairies to Labrador. Hubert Furey, an accomplished storyteller, author, performer and modern-day master of the recitation, has a great story of a man from Harbour Main who, in the days of sailing schooners and long before modern communication, mysteriously disappeared for a short period of time from a very remote section of the Labrador coast. The man returned just as suddenly and with current knowledge of local happenings in Harbour Main, hundreds of kilometres away on the island of Newfoundland. The insights he had were impossible for him to know or have heard from anyone in that time or place. He claimed to have been transported home, perhaps by fairies. The crew, of course, laughed and dismissed the incident, but after returning to Harbour Main at the end of the fishing season, all the things the sailor claimed to know (and shouldn’t have) turned out to be exactly true.
Clarence Mercer, chair of the Bay Roberts Cultural Foundation, also has a Labrador fairy story involving a man living in Bay Roberts some 65 or 70 years ago. This fellow was working at a fishing rooms located somewhere in distant Labrador. He was a well-seasoned traveller and quite familiar with that particular area. Supposedly he went for a Sunday morning stroll and inexplicably got lost in a tiny spot he knew very well and could not find his way out. It was only on the third attempt to find him that he was able to get out and return to his crewmates. The event made so little sense that it was attributed to the fairies leading him astray.
I remember a kindly old soul, the late Rob Brown of Colliers, regaling me with fairy stories in my youth. He told me of fairies leading animals or people astray or “laying a beating on someone with sticks or boughs of trees.” There was even something called a “fairy blast” - a strange wound or bizarre mark suddenly appearing with no obvious origin. People who had changed in personality or actions or appearance after being lost and returned were said to be “fairy-led,” and children were gently warned to forgive such folks for minor slights and to be always kind to them, for they were not to blame. But all these stories were before my time, so I asked Rob one day, when he was in his 80s, why he thought there were no new reports of fairies.
He looked at me through his Coke-bottle thick glasses and gave me a big smile, saying, “The lights came in and pushed back the dark. When we only had kerosene lanterns, there were fairies and spirits hiding around lots of places, and it was only a few masses and a few prayers for departed people and stories to tell to keep them at bay. Now with all the electricity and lights and TV and gizmos and distractions, there is no room for the fairies out around here no more. You’d have to go back in the woods or far in the country where it is dark and quiet to find them. But they might still be out there yet.”
I wouldn’t doubt that Rob may have been right, so if you go down in the woods this May, bring some bread in your pocket, just to be on the safe side, of course. - Story and photos by Dennis Flynn