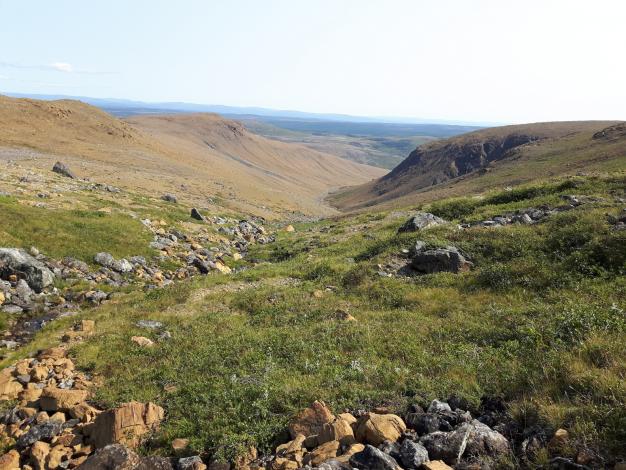 It all started around a kitchen table, as all great discussions do. My best friend Doug was telling me about his previous hiking trip to one of Newfoundland’s highest hills. I was giving serious thought on doing it on my own, until he said he wanted to hike Newfoundland’s highest peak known as the Cabox. That sparked a fire that wouldn’t die down in my mind.

The Cabox is located on Newfoundland’s west coast roughly between Stephenville and Corner Brook, in an area known as the Lewis Hills. It is also part of the International Appalachian Trail. It towers above all other hills in Newfoundland at an elevation of 2,670 feet.
We decided to go for it and chose September 3 as the date. It was on the Labour Day long weekend, and we thought by the end of the summer the rivers would be at their lowest and the bogs and barrens will be at their driest.
While waiting for the hiking day to arrive, I thought it would be great to combine one of my favorite hobbies, amateur radio, with the hike by operating SOTA (Summits on the Air, www.sota.org.uk) while at the Cabox. SOTA is amateur radio for the more adventurous. It involves taking your radio equipment to a summit, hill or peak and “activating” it by making contacts from there. You need just four contacts with other radio operators to activate a summit. I devoted every waking moment to getting a SOTA association up and running in time for our trip, and on Canada Day 2017, SOTA Newfoundland was official.
With the SOTA association in place, our gear situated and trail mapped out, we headed out. We lucked out weatherwise, and as we travelled westward it kept getting better. It took the better part of a day to travel from the east coast over to Stephenville. We then followed a woods road north. That evening we made basecamp. When the sun had set, all the clouds in the sky had disappeared and every star and constellation filled the sky. Doug is an amateur astronomer and pointed out every star and constellation we could see. We could have stayed up for hours just staring at the sky, but we had a very rough hike the next day and morning was approaching fast.
We awoke just after 4 a.m. The pain of an early rise was quickly brushed aside as the bright stars were still in the sky. Breakfast was quick and off we went. Early on we were faced with a very wet bog, then trekked through small rolling hills and more bogs. It was difficult at first, as it was still dark and we were running on flashlight and twilight. We came to our first big dip about three kilometres into our hike. The sun was just popping up over the hills and we saw moose and partridge. The entire area was painted in sunlight, showcasing one of the most amazing and beautiful sights I had ever seen. You would have thought you were on Mars. Ahead was a huge 400-metre gorge, carved by wind and water, that we would have to climb. We crossed a bone-chilling river and started up.

We continued up the large gorge, and on the top you could have thought you were in northern Labrador. We started picking out plants and berries only found in the northern climates. I even picked up some Labrador tea plant leaves to make tea once I was back home.

From the top of the gorge hiking got a lot easier. There were still lots of hills to traverse, but nothing as bad as we had previously experienced. The sun was now high in the sky and providing more heat than I wanted with 30 pounds of gear on my back and still more hills to climb. We continued, hopping across rivers and manoeuvring around ponds. An hour later the peak was finally in sight.

By noon we had made the 12-kilometre journey and reached the top of the Cabox, where there is a plaque to mark the summit. A herd of caribou greeted us. We soaked in the beauty around us. We had a bit of fun taking our photos with the plaque before working on setting up my radio.

With the radio set up, I began scanning for contacts. I was worried that after all the hiking and gear lugging, I would not be successful. Luck was on my side, though, and in 20 minutes I had my four required contacts in the logbook. I kept going until we had to pack up for the 12-kilometre hike back. I was able to make contact with radio operators from Ontario and several US states - MI, MA, CT, PA, OH, NJ, VA and more. It was not really the best time of day to contact European stations, unfortunately, and we could not stay any longer.

Content with the contacts and time running short, I packed up the gear and we headed back. We made excellent time and were able to make it back to base camp by early evening, just in time to see two moose. A well-deserved meal and a glass of something strong was in order. We both slept like a log that night and continued on home the next day.
Growing up in rural Newfoundland, I have always had a great respect for its geographical beauty and an appreciation for its animals and wildlife. This amazing trip was the pinnacle of both. I was able to combine my love and passion for this beautiful province with the (in my opinion) best hobby in the world. - Story and photos submitted by Loren Butler