The Road to Big Brook 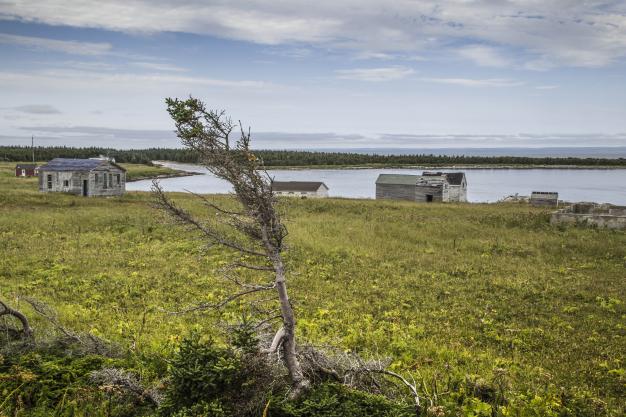 The resettled community of Big Brook (all photos courtesy George Slone)
When I mentioned I was on the hunt for abandoned outports, one of the cooks in the B&B where I was staying in Hay Cove suggested Big Brook. So I packed up and drove towards Cook’s Harbour, stopping at a gravel road with lots of wood piled up, just as the lady had instructed. From there I drove very slowly, negotiating the many potholes. Eventually, I got out and walked (and walked) until I came upon a river that cut right through the old road - where I decided to turn around. After finding and driving down yet another pothole-laden road, I gave up on Big Brook.
That was during my vacation to Newfoundland and Labrador in June 2014. On subsequent trips to the province over the next couple of years, I hunted down other abandoned outports, but Big Brook kept popping up in my research. So last year I contacted Parks Canada for assistance, and a lady named Erika kindly responded: “You can drive north from Eddies Cove to Halfway Brook. There is no bridge, but the brook can be walked across if water levels are low (very likely with the weather we’ve been having). That is the route that staff took last month. The route from the north driving south to Big Brook may or may not be in good condition, because we haven’t seen it lately. Neither brook has a bridge. Probably best to go in from the south if you wanted to go by the most recent information…”
I checked the map and determined I’d have to hike about 12 km one way after Halfway Brook…in a bear and moose zone. I then read through a couple of blog entries from people who had gone or were planning to go to Big Brook. One of them noted that a regular car could definitely make it driving down from the northern part of the road if the driver went slowly and cautiously. In St. Anthony, I spoke to the woman at the Sir Wilfred Grenfell Interpretation Centre who confirmed this. She said her husband had driven to Big Brook recently in a regular car. “You just have to drive slow,” she cautioned.
In early September, up at about seven o’clock in the morning, I took off driving and arrived in…Cook’s Harbour? Somehow I’d missed the road to Big Brook. It was cold, windy and bleak. Two guys and a woman were standing on the stairs in front of the convenience store, so I pulled over to discuss my day’s adventure. The woman, who ran the place, said, “The road gets easier after the beginning, ’cause then it’s gravel, my love.”
I drove on to Wild Bight, which really did have a wild look with its rugged, treeless barrens accompanied by wind and dark skies. I stopped here and there to take photos. Then I continued on to the Cape Norman Lighthouse over the potholed, gravel road. It really seemed remote. Finally, I turned around and headed for the road to Big Brook, which I was told would be marked by an osprey nest. And before long, sure enough, there it was. I took a right turn onto the rubble road of potholes.

I drove about 5 km/hr, then 15-20 km/hr when the potholes gave way to gravel and dirt. Eventually, much of the road turned to rubble rocks. Up and down, up and down, the car jarred. It was definitely the roughest road I’d ever been on in Newfoundland and Labrador - rougher than the road in Mary’s Harbour and the highway to Burgeo. Government maintenance of it ceased after the town resettled in 2004. Part of the resettlement decision was made because the children had been missing too many days in the winter because the older ones had to travel to Cook’s Harbour for school.
The first 2 km or so is mostly woods with some ponds, then it quickly opens up. At Watson’s Brook, I crossed over the narrow little bridge, which was still in good condition. The scenery became spectacular - wide open with no trees at all to block the view. Vast expanses of limestone barrens lay before me as I continued onwards. Magnificent!
I stopped a moment to chat with a moose hunter, who said his friend was off chasing a moose they’d spotted. Then farther down the road, up and down, up and down bumping, I saw the other guy zooming on his quad, rifle on his back. It was amazing how fast those things could go on such rough terrain. Then - bang, bang, bang. I’d driven over one of those big, aluminium drainage pipes that crossed the road. This one was not fully buried. I stopped and noticed a foot-wide piece of metal hanging from the underside of the car. I tried ripping it off, but that didn’t work. Was it part of the car or part of the pipe? I wasn’t sure, but continued on. I had no problem driving, except for the tap, tap, tap of that piece of metal on the road. Then finally, in the distance, I could see the rusted shipwreck my research told me I should expect, and I knew I had arrived.

It took me an hour and five minutes to get to the little settlement. I parked and took some photos, walking around the abandoned stages and houses. Inside one of the houses, old magazines, books and kids’ toys littered the floors. I walked down into the basement: Lots of broken toys and magazines there, too. Then I walked on a dirt road a bit, eventually arriving at the brook where the bridge once connected the north and south parts of the old road. There was no way I could have walked across from the other side! It was waste deep and moving rapidly.
Down the brook, back towards the town, I saw two guys with a quad half in the water. It looked like they might have been stuck. “Need help?” I asked. “Nope!” they said. They were cleaning the quad. Lloyd and Don were their names. They lived in Corner Brook and had spent the last 10 days in Lloyd’s father’s old house. They’d caught a moose yesterday morning. Don showed me the meat hanging in a shed.
Then their two wives, Shirley and Audrey, popped out of the house. Lloyd took me for a quad ride to visit the shipwreck, after which he invited me in for tea. We all sat in the old house sipping tea and eating carrot cake and crackers with bakeapple and partridgeberry jelly.
Outside, Lloyd pointed out the old caplin table, the old schoolhouse, the outhouse he built in the ’60s, the two old stage heads (one of which was owned by his family) and his father’s last boat, parked near the old school. The government wharf, he said, was in such good condition because it was built only one year before resettlement!

I then continued exploring the old buildings. Stepping inside the schoolhouse, the feeling of time gone by and emptiness really hit. The two chalkboards, one of which was no longer on the wall, and a pile of notepads were all that remained. No more children. Outside I took more photos before finally driving off. It was an amazing visit.
On the way back, I stopped now and then to take more photos of the vastness. How to encapsulate it in a photograph? Probably not possible. A little red fox poking around in the moss and lichen peered at me. I tried walking closer, but it scooted off.
The road to Big Brook is the most magnificent road I’ve ever been on, taking me through vast, alluring and fascinating barrens - perhaps the closest thing to being on the moon. - By George Slone

Love the photos and the narrative. Thank you! Leslie