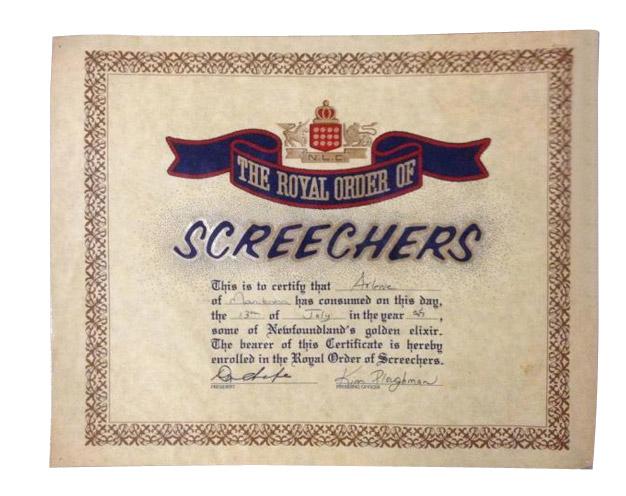 Everything in Newfoundland and Labrador begins with cod. It is the most important thing. At least, that's the patriotic mantra of social entrepreneur Zita Cobb of Fogo Island Inn fame. And she might be right.

For one thing, even the popular, yet controversial, Screech-in has a direct lineage to our famous fish. For centuries, Newfoundland and Labrador's salted fish went to the British West Indies on schooners as part of the historic triangular trade. On the return run, back came the Screech rum, which became the traditional drink of Newfoundlanders.

The rum eventually served as the sacred potion in the Screech-in ceremonies carried out, tongue in cheek, to bestow Come from Aways (CFAs) with honorary Newfoundlanders status.

And if it weren’t for the Screech-ins, Newfoundland and Labrador’s fifth premier, Clyde Wells, would not have had to issue a decree about the indignity of kissing the dirty ol’ cod. It resulted in the shredding of about 4,000 Screech-in certificates and created quite a stir at the time.
Not in My Name
In the early 1990s, Newfoundland and Labrador’s premier was a respected corporate lawyer. Premier Wells had many serious matters to contend with - severe provincial economic hardships, the Meech Lake constitutional battle and a looming resource crisis - all of which he tackled head on. The cod’s head was no different.
St. John’s native Simon Lono was a young staffer in the newly minted administration. He recalls how the famous story unfolded.

“I poked around the office registry and discovered a huge stack of official Newfie Screech-in certificates. I was told by the office registrar that the practice was to have them signed by the premier and send them out upon request to anyone who asked. That policy had been in place for as long as she knew,” he says, noting that she’d been working there a long time.

As soon as Wells became aware certificates were going out in his name, he gutted the practice, ordering all of them destroyed. Wells, apparently, had always found the ceremony offensive and belittling to tourists, not to mention that it could be perceived as government endorsing the glorified role of alcohol in our culture.

When Lono dug deeper, he discovered the certificates were, in fact, sanctioned and issued by the Newfoundland and Labrador Liquor Corporation (NLC). When Wells was informed of this, he also demanded the NLC shred the “Royal Order of Screechers” certificates that bore his signature. It is not known how many were issued before the command was sent out from the premier’s office.

Edsel Bonnell, now 82, was Premier Wells’ chief of staff and remembers the Screech-in policy change. He was in the premier’s camp on this directive. “I recall that the previous government had made Screech-ins virtually an official ritual, ordained by government, which poor unsuspecting (and many timid) visitors had to endure,” Bonnell says. “While civic organizations and bar-owners have every right to hold Screech-ins if they so desire, we felt it was inappropriate to make visiting VIPs and unwilling tourists kiss a cod and slug down a heavy shot of rum (especially if they may be allergic to fish or are non-drinkers or recovering alcoholics).” He adds that they didn’t outlaw Screech-ins, the government just removed itself from any formal association with them.

History of Screech-Ins
The story is that the Demerara rum coming from the south was given the name Screech after an American swallowed a sip and reacted to the alcohol’s bite with an ungodly screech. As for the ceremony, today it is well acknowledged that the Screech-in was invented sometime in the 1970s.
Credit for popularizing the rite is often given to a teacher, Merle Vokey, who was looking to entertain a conference of Atlantic teachers in 1976. He devised a ritual that involved a shot of Screech, eating a Newfoundland food (usually bologna), swearing an oath and smooching a cod. Vokey, however, has credited the ceremony’s roots to the American bases in Newfoundland, with staff at the old Bella Vista Club designing the original ceremony for their Tourist Night. Names associated with the Bella Vista ritual include Joan Morrissey, Frank Healey and Joe Murphy. Former CBC journalist Roger Bill wrote a doctoral dissertation on the subject, and credits Fred Walsh, who worked for decades at the Argentia naval base, as one of the main founders.
By the 1980s, the NLC adopted Merle Vokey’s Screech-in ritual as a way to market its Newfoundland Screech rum.
The 1990 Backlash
After Premier Wells got fired up about the certificates and the ceremonies perpetuating Newfoundland stereotypes, it sparked a war of words in opinion sections of local newspapers.
On the opposing side were folks who, like Wells, felt the Screech-in was a mockery of Newfoundland culture. The rite has been described as hateful, degrading, insufferable, loathsome, embarrassing and corny. The Heritage Coalition of Newfoundland, headed by Lieutenant-Governor James McGrath, raised concerns about the public display of the Newfoundland image, calling upon government to find a replacement rite in a March 26, 1990, Telegram article.
A decade later, the arguments against it roared on. In a 2001 Telegram letter to the editor, author and former talk show host Bill Rowe described Screech-ins as “cliche-ridden, shallow, boozy, stereotypical tripe.”
There have been others all along, however, who agree with a former editor of Downhome, Vince Hempsall, who upon his farewell editorial in 2001, proclaimed his passion for the quirky custom.
“I love Screech-ins! I love getting Screeched-in. In fact, I have no less than four Royal Order of the Screechers certificates and I’ve attended dozens of ceremonies. I’m the most honorary Newfoundlander you can find and I take pride in the title. So I find it surprising when real Newfoundlanders say they detest the tradition.”
While the ceremony is still highly contentious, it is also hugely popular and has become a boon for the bars, especially those on George Street. Says Lono, “Sure there are always the bars that highlight them, but I think tourists are more sophisticated today. They look at Newfoundland and Labrador differently than they did 28 years ago.” - By Kim Ploughman

What is happening to Newfoundland and Labrador. No wonder people are leaving. Everything we love here or do here will soon be gone

My husband and I are from Alberta. In June-July we visited your great province with a tour group from Manitoba. We had a fantastic trip and a great introduction to the land and people. We were not impresses with a "mini" screech in at a pub on George St., St. John's as it was slap dash and quick to the point of some of the party missing what was happening! However, we certainly enjoyed the one at Bonne Bay which was administered by the captain of the boat on which we had toured the Bay. The whole group received their rum, if they so wished, and a great into to the custom by the captain dressed in full fishing gear. He looked over the group and picked a person ( me, likely because I was having a great time and taking part in the singing) to join him at the front for a bit of local dialect, terms and song. I ended up kissing a realistic looking, plastic cod which most of the group thought was authentic(I'm a farm and ranch gal so I just told him to bring it on and I would have bussed a real one!. So please keep the custom as it was a lot of fun. Copies of our screech-in honorary Newfoundland membership are included in our memory photos and notes.