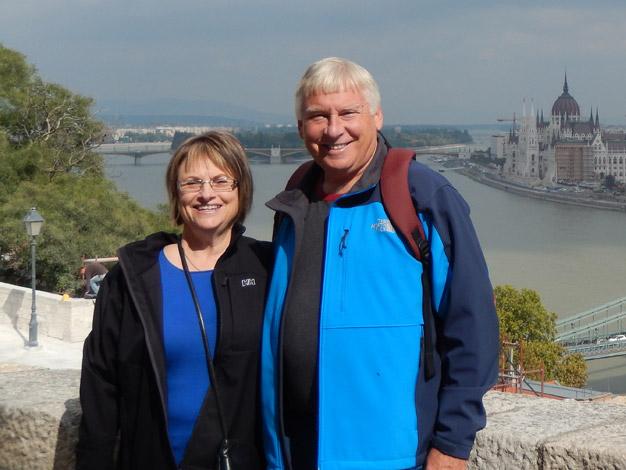 Phil and Lyla Riggs are a couple of seasoned world travellers. They've driven through Canada, the US and the UK, hiked the El Camino de Santiago through three countries, sailed through central Europe and floated in the Dead Sea.

After they married in 1973, they moved to the Northwest Territories to teach. They stayed for four years before deciding to move home to Newfoundland and Labrador. But first, they were going to make an adventure out of it. They bought a camper and took a year off, travelling along the Alaskan highway and driving down the coast. Next, they hopped on a ferry that took them down the coast of British Columbia and then set off across the rest of Canada.
Setting up the camper wherever they could turned out to be a great way to meet new people. (They even played a few impromptu baseball games with fellow travellers while on the road.) “We had some grand times,” Phil says from their current home in Glovertown, NL.
Certainly, the Riggses have been to a lot of places - but one place you’ll never find them is on a bus tour. They prefer to be the ones driving the journey.
“In a tour bus you only really meet the people who’s on the bus,” Lyla says. “You don’t really meet the people who live there, which is what we like to do.”
The Riggses have also seen much of the world on foot. When walking, Lyla explains, life is simple. You only have your backpack and the bare necessities. You eat, sleep, walk and do a little sightseeing in between.
“Your time is your own. Basically, you have no worries about daily activities that you have at home,” Phil elaborates.

Together, the avid hikers have traversed parts of the El Camino de Santiago, a network of pilgrimage sites that stretches across Portugal, Spain and France. (Phil wrote a book, Hiking the Spanish, Portuguese and French Caminos.) After a long day on the trail, Lyla loves to stop at a small village and, after they’ve settled into their accommodations, head to the town square and the hub of local life.

“And they tell you a little bit about their village and they want to know about you, and this kind of thing. That’s what I like: they’re chatting with you and you’re really meeting the really local people,” she says.
Of course, a pair of Newfoundlanders abroad is bound to find a connection to home at some point. In Portugal they encountered a group of men working on the shore and stopped to chat. The men wanted to know where the couple was from but didn’t understand where Newfoundland was.
“Finally we said ‘White Fleet? You know the White Fleet that used to come from Portugal and sail into St. John’s?’” Lyla says. “Well, as soon as I said the White Fleet, they just knew all about St. John’s, Newfoundland. And they told us all about when their relatives used to come into St. John’s on this White Fleet. And they even had relatives that actually died and were buried around in St. John’s.”
Memorable Moments
One of Phil’s favourite voyages was to Jordan five years ago. They journeyed from the capital, Amman,
and went to Petra, a UNESCO World Heritage Site known for rock-cut features carved into rose-hued stone. “It’s an absolutely beautiful place to go to. I rented a horse while I was there and went all up around, and then I went up on the higher regions, too.”

They also visited the River Jordan (believed by many to be the site of Jesus’ baptism) and witnessed the presence of Israeli and Jordanian soldiers guarding opposite sides of the waterway.

Throughout their years of travels, they’ve been keen to capture the locales in photos. Lyla says they aren’t much for picking up souvenirs, preferring to make memories, but they do have a few cherished mementos. In Austria they bought a snow globe for their grandchildren; in Prague, hand-painted eggs caught their eyes; and in Budapest they took home a hand-carved Santa that came from Russia.

After more than 30 years of adventuring, the Riggses still have plenty of places they hope to explore.
“I want to go to Switzerland and get on a high mountain and yodel,” Phil says. “That’s always been my dream.” Lyla, meanwhile, wants to head to South America and see Peru.
While they always seem to have their next expedition in the works, they admit it’s nice to come back to family and their own bed.
“It’s always good to come home. No place like home, as they say, pardon the cliché,” laughs Lyla. “When you come home and you look at your pictures and you put it all in perspective then, and you think about all you’ve done and you’re just amazed by it. ‘Did I really do that?’” - By Elizabeth Whitten