In it for the Long Run

Joe Ryan is a legendary figure in local running.
The promise of heat from the late July sun playing over the pensive crowd of thousands assembled in beautiful Paradise, NL is forgotten as a multi-hued python of humanity explodes forth at the starter’s signal. Each in their own way, they are determined to sprint, sashay, saunter or simply slog their way through the Tely 10 to Bannerman Park in the heart of old St. John’s. As I plod along near the back of the pack, a distinguished grey-haired gentleman passes me at a fine clip and I do a double-take as he calls out, “Grand day, Dennis! Have a good run!”
He is wearing a tuxedo, an honest to God, full-fledged tuxedo, and he is effortlessly passing people while calling out words of encouragement. He gets plenty of nods and smiles back, as everyone knows the veteran runner. Joe Ryan is a legendary figure in local running; he won the 1969 Tely, has been running his whole life, and he literally wrote the 2002 book on the history of the Tely 10. 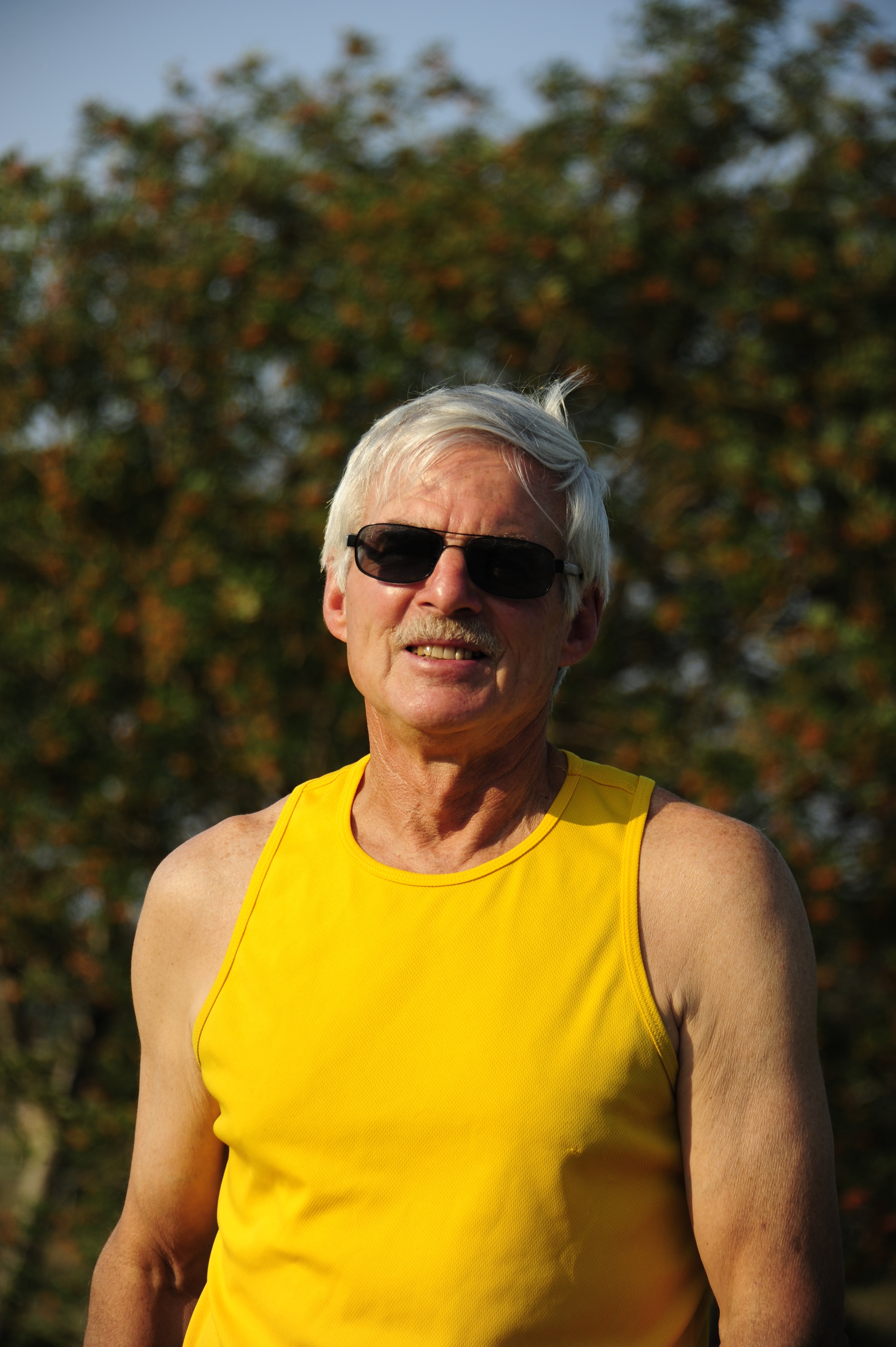 Joe, now 68, is a retired teacher-librarian originally from the small community of Calvert on the Southern Shore. “I think I was always a bit of a natural runner,” Joe says. “I started running as a young boy on the roads and in the fields and meadows of Calvert. I always ran. I played tag at school and street hockey on the roads. I can’t remember not running. I ran from the house to the fishing stages and from the stages back to the house.”

While studying at Memorial University, Joe ran with the cross-country team and was named MVP twice. Work commitments took Joe away from serious running for a number of years, but in his lifetime thus far he has run 63 marathons, including the world famous Boston Marathon 12 times, and he’s completed the Tely 10 a record-setting 45 times.
Joe adds with a smile, “That was why I was wearing the tuxedo about this year, to have a bit of fun with reaching that milestone.”
In retirement he’s not slowing down. He still runs and he instructs running groups in St. John’s. “I try to inspire all the runners who join my group, encouraging them and motivating them to be the best they can be,” Joe says. “Of course, we train fairly hard and practise our running, but we try to have fun doing so. I try getting them to believe in themselves, to always, always think positively and have no negative thoughts about what they are doing. ‘I can do this’ becomes our motto and we explore various ways to make that happen.”
He says, “Running, for me, has been a way of life. I once ran for over 28 years without missing a day, through storms, travel, strange cities etc. I run because I can, and I run for those who can’t. I run to stay physically fit and to be healthy. I run because it is a gift I have been given. There are many who would love to be able to do what I do, so I run for them.” 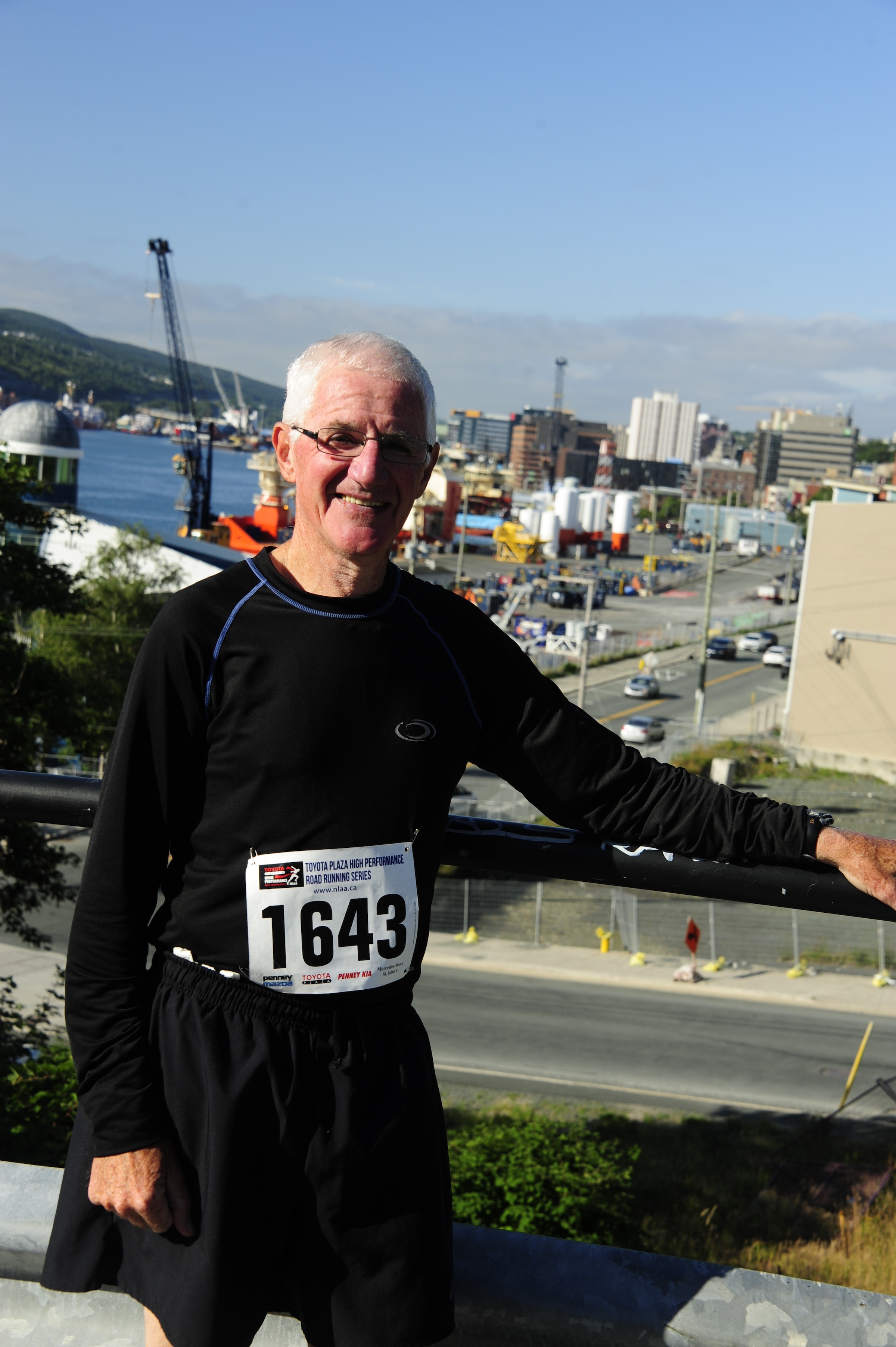 Even though he’s older than Joe at 72, Elroy Hynes of Ferryland, NL, is newer to the running game. I meet up with him on Signal Hill Road this past August, after he earns a first place finish in his over-70 age group at the Oceanview Provincial 5-K road race (run in “23 minutes and change,” he says with a winning smile).

A former teacher, Elroy was in his 40s when he took up running, “at the urging of some friends, including a fellow teacher who was a runner and was always bugging me to try. To tell the truth, I thought they were crazy at the time, but now I am hooked and can’t stop,” he confesses. Since then he’s run a number of half-marathons, marathons, the gruelling Cape to Cabot road race, and the Tely 10 an amazing 27 times.
“The Tely is my favourite event,” Elroy says. “I did it in around 78 minutes this year and knocked about a minute off my time, so I was happy with that. It is important to remember you don’t necessarily have to give up running when you don’t feel like doing the hardest races anymore, you just find something that works for you and keep going. You are never too old if you are healthy and it will keep you in shape.” 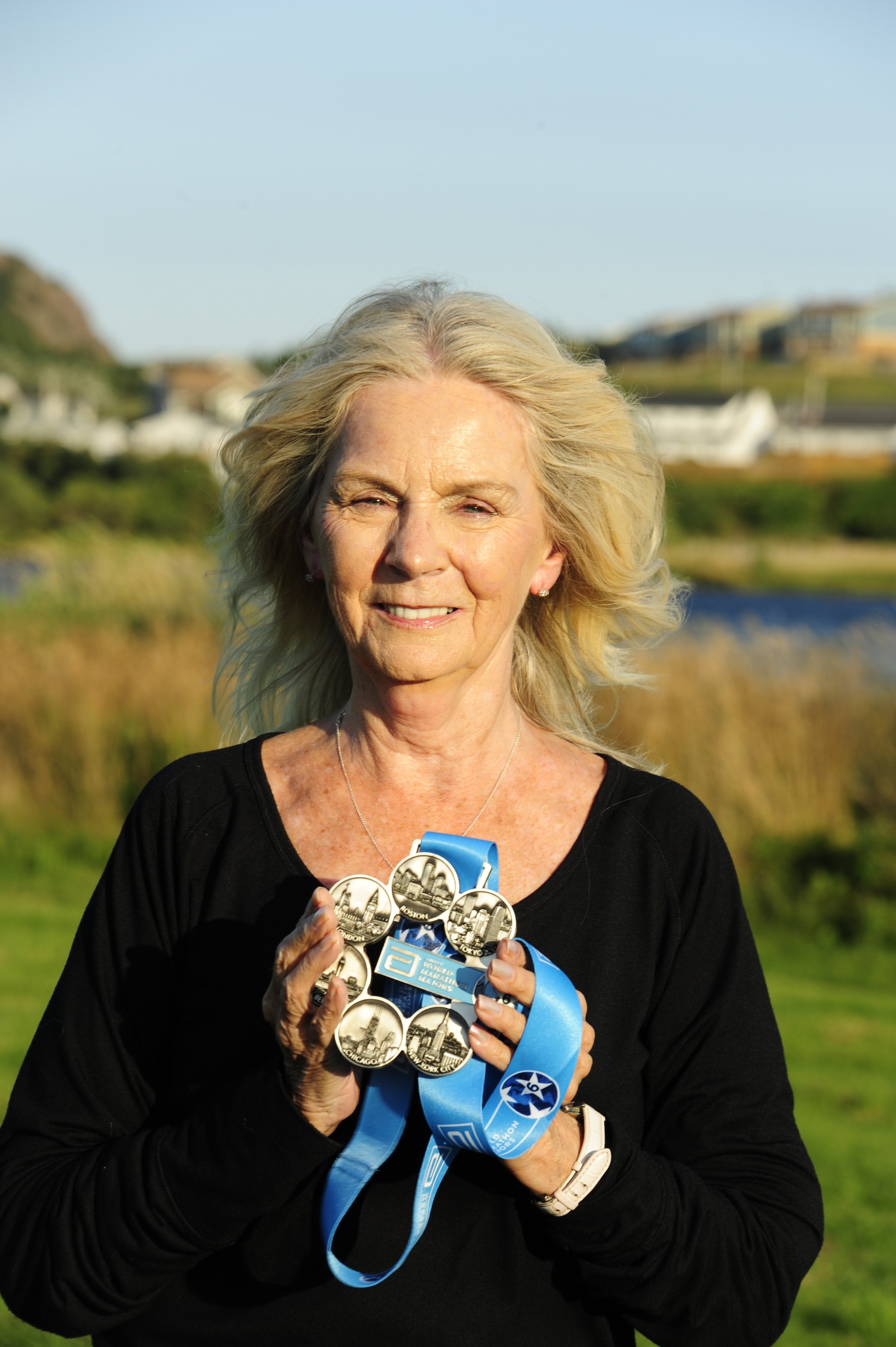 Rosemarie “Doot” James is a well-known name in St. John’s running circles. She has the appearance and

energy of someone at least 25 years younger than her age of 76. Also a retired teacher, Rosemarie taught school for 38 years at St. Patrick’s Hall in St. John’s.
In retirement she found she still had plenty of energy to burn. “I figured I wanted to do something and, not that I mind knitting or crocheting, but I wanted something a little more and happened to stumble on a beginners clinic for women at the Running Room in St. John’s, and went in to see what it was all about. After 20 minutes of listening I was hooked and the rest is history. I bought a pair of sneakers the next day,” Rosemarie recalls.
“I was 61 years old when I started and had never run before in my life. The first few times were very hard, but I got the hang of it, followed all the rules and the advice from the various clinics and coaches I have had over the years, and I highly recommend that. Get good advice and training and follow it. Even now I keep a book each year of all my training runs - how far I went, what I wore, what I ate and how I felt - and use that to know what works for me and what I should change up or try different.”
Rosemarie is a believer that you’re never too old to start running. “My only regret is that I never knew about it earlier in life. We never had gym class or even recess at school, but on my own time I was always active and loved sports.” She tells the story of when she was 17 and went behind her parents’ back and signed up for a Roll-athon at the old Memorial Stadium. “I roller skated for 23 and three-quarter hours [without stopping] and there were only two competitors left for the main prize [ironically a pair of roller skates]. The only reason I stopped then was because I had to beat it to 12 o’clock mass up at the Basilica.”
Rosemarie’s list of running accomplishments is so long - including 15 Tely 10s and a number of Cape to Cabots, which is one of her favourite races - that I will skip over them to get to the most special. In 2016, Rosemarie became the first female from Newfoundland and Labrador to successfully become a “Six Star Finisher,” meaning she has completed all six of the world’s major marathons: Boston, New York, Chicago, Berlin, London and Tokyo. It’s a pretty exclusive group of less than a few thousand runners around the globe. You don’t necessarily have to be an elite runner to get there, but you do need to be consistent, driven and keep plugging away at your goal races year after year in order to make the challenge. Other Newfoundlanders and Labradorians in the Six Star Finisher club include Ian Royle, Paul Lahey and Yvonne Martin (who made the list in 2017).
To beginners, perhaps someone reading this and inspired by her story to give running a try, Rosemarie says, “Make sure you get a medical and are fit to do it, get good clothing and footwear for the seasons and conditions you plan to run in, follow the rules of your training, and have fun. Running has been a great adventure for me.” 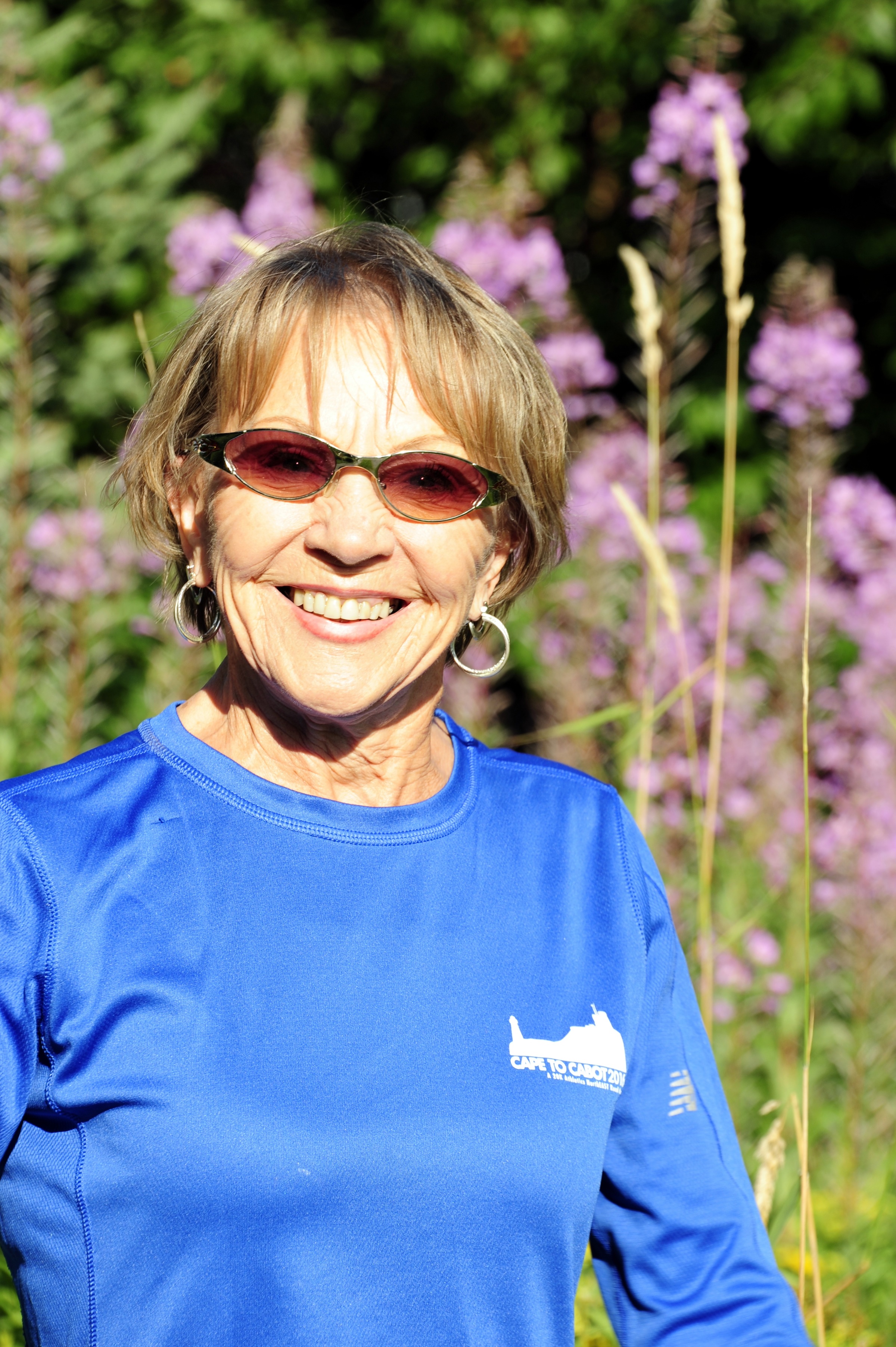 At age 79, the diminutive Florence Barron of St. John’s is a positive force of nature who routinely wins her age category in just about every event she enters. She earned the gold medal in her age class during her very first Tely 10 (20 races ago now), and in 2017, she set a new record in her age class for the Cape to Cabot.

“For me, running teaches us a lot about who we are. It shows us our limitations and how to move past them by raising the bar,” Florence says. “I am retired but a longtime volunteer with Red Cross and HMP library, and love to be active. I grew up in Labrador and on the Northern Peninsula, and we were always at something - be it skating or swimming or sliding or skiing - so I have always loved to exercise. I only started running when I turned 59, but I am addicted to it now.”
To put her performances into perspective, media observers indicated that Florence’s 2017 Tely 10 finish (in the women’s 75-79 age category) set a new age group record and she finished ahead of more than 3,000 other runners (out of a field of over 4,355 finishers) in an amazing time of 1:27:19 (chip time) for the 10 miles. She also set a new age class record (knocking 15 minutes off the previous one) in the Miquelon 25K last summer in the nearby French Islands of St. Pierre et Miquelon.
“I run for the love of it. It is my therapy, it is my lifestyle, it keeps me healthy, and I meet lots of new friends,” Florence says. “I will do it as long as I can. I always like to say this little quote, that running allows you to live your life and forget your age.” - Story and photos by Dennis Flynn
MORE ARTICLES
load more