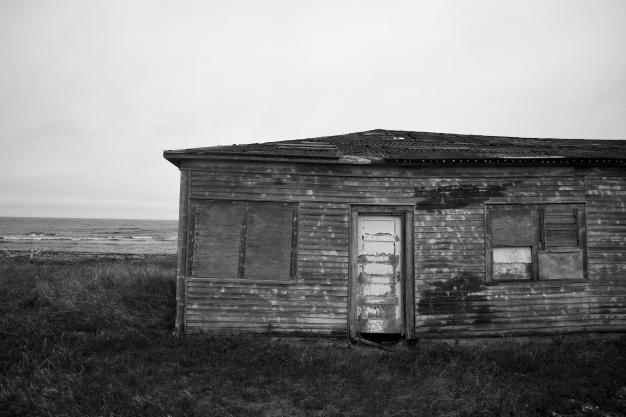 The first time April MacDonald photographed an abandoned house she was a teenager and had borrowed her mother’s Polaroid camera. She and her friends happened upon the dilapidated dwelling one evening while seeking a sheltered hangout. It was a perfect refuge, but April felt it offered far more than a meeting place. She returned at daylight to document the site. Against a backdrop of fishing villages in decline, April saw the house as an architectural time capsule steeped in history, hinting at how people once lived.

It was a scene she identified with, given her own family had vacated their home before she was born. The MacDonalds were resettled in the 1970s from one fishing community on Woods Island to another in Frenchman’s Cove as part of the Fisheries Household Resettlement Program, offered by the Newfoundland and Labrador and Canadian governments. Born into a fishing family that continued to fish once resettled, the MacDonalds frequently travelled by dory back to Woods Island. That’s where April “learned to love what was falling down around her,” she says.

Woods Island is the largest island in the Bay of Islands. It sits due north of the Lewis Hills with views to the Long Range Mountains. The Humber River flows into this bay, the waterways continuing west to the Gulf of St. Lawrence. This uninhabited island is surrounded by fishing communities past and present on the bay’s southern and northern shores. Several fish plants in the region remain in operation.
Catching a glimpse of Woods Island and other abandoned communities is possible through April’s work. She launched a website last year to sell prints and paper merchandise featuring her photography. What visitors to her website will see are tea cups at the edges of sinks, casually left by owners long gone; faded floors in front of kitchen sinks and windows where women looked longingly out to the sea for a loved one’s return; and aging wooden saltbox houses and docks, still standing and trimmed in teal greens and marine oranges despite decades of disrepair and relentless beatings from ice, wind, salt and waves.
“You can really see how the people lived. There are telltale signs if you sit on the floor of an abandoned house long enough,” says April, now speaking with years of experience having photographed upwards of 100 abandoned homes so far. 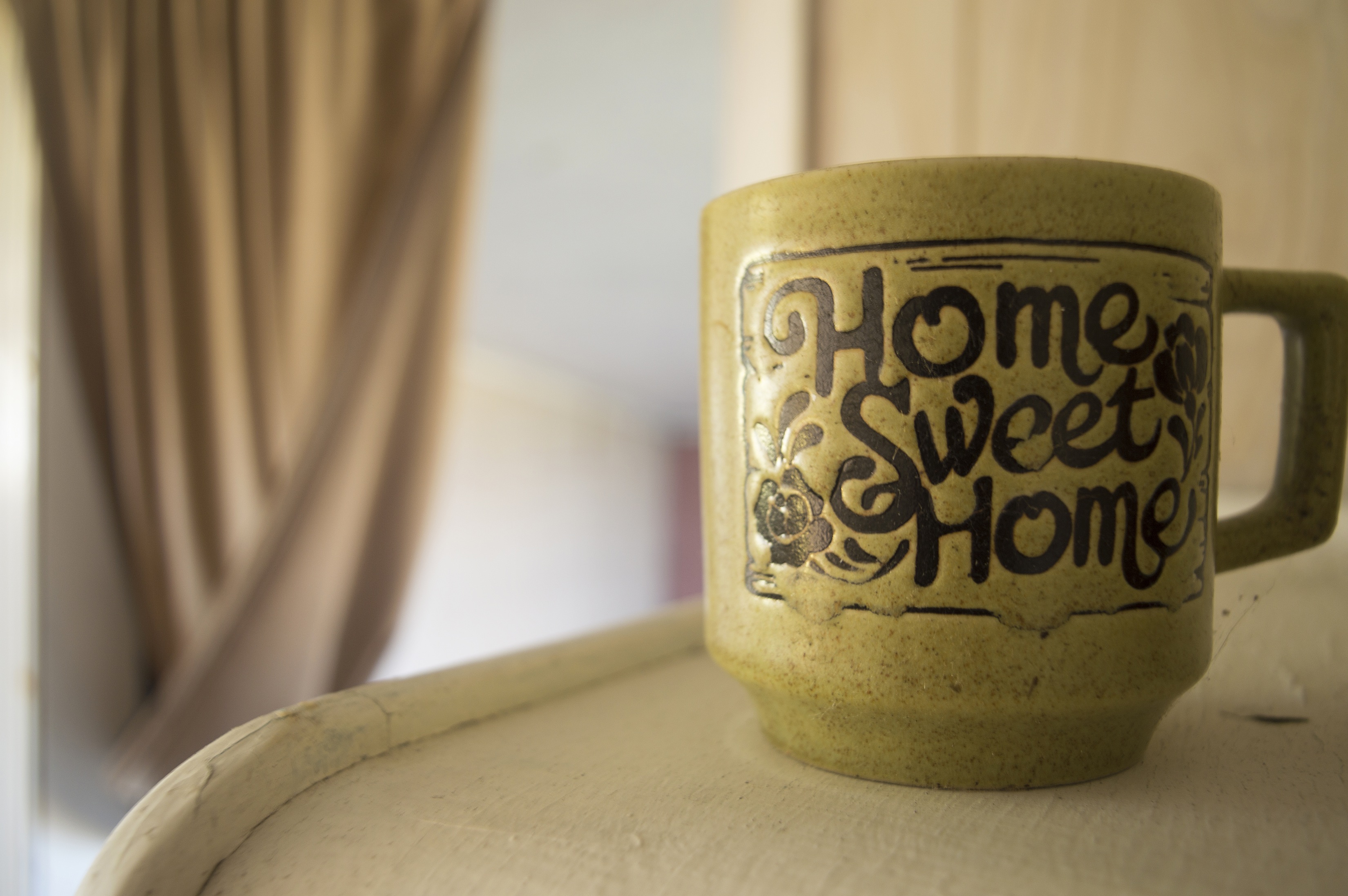 Roads to Resettlement
Historically, there were two resettlement programs in the province. Dr. Jeff A. Webb, professor in the Department of History at Memorial University and author of Observing the Outports: Describing Newfoundland Culture, 1950-1980, explains: “The first program was intended more to save government resources and provide access to social skills and social services that just couldn’t be provided to people on very remote islands. The second program was intended more as part of a package of making the fishery more modern and efficient.”
Predating the 1965 fisheries resettlement program that the MacDonalds were part of was the 1954 provincially led Centralization Programme. Of the reported 1,200 outport communities at that time, nearly half had 30 or fewer families, according to the NL Heritage website. Supplying healthcare, education, electricity and transportation services over this sparse population would have amounted to economic suicide for the province. Resettlement programs arrived as some Newfoundlanders were already moving out of outports that were floundering under the changing fishery: the new dragger fresh-fish industry had begun outpacing the traditional schooner salt-fish industry.
“The Newfoundland government put money into the resettlement program a little like pouring gasoline onto a fire,” says Webb. “So it caused something that had been happening naturally to happen much more quickly and with a greater degree of disruption.” 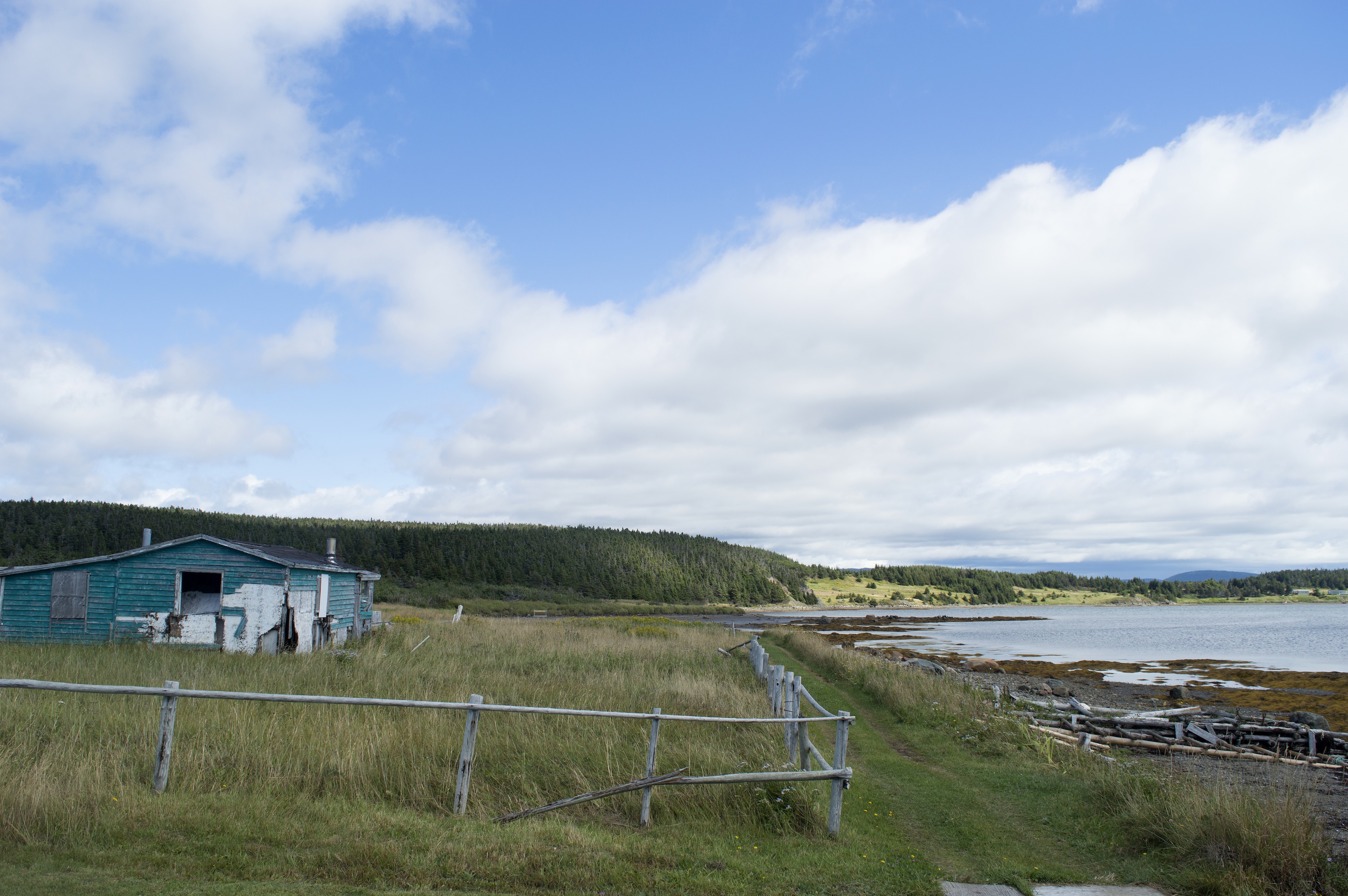 Communities were only resettled if a majority (80-90 per cent) of the population consented, says Webb, but questions arose such as who qualified to vote. The greatest issue perhaps was the sheer scale of the changes and the limited timeframe over which they occurred.

“The failure was not in moving people out; it was the fact that the government lost control of the pace of moving,” says Webb, acknowledging resettlement was the right decision. His point is there were many cases of inadequately prepared “receiving communities.”
The late Dr. Parzival Copes, expert in fisheries economics and Order of Canada recipient, would agree. He
argued resettlement failed to go far enough to encourage people to leave their communities, the fishery and the province altogether. The greatest failure, in his view, was perpetuating too many fishermen catching too few fish.
April points to an abandoned property on the Northern Peninsula in Hawke’s Bay, which together with Port au Choix was designated a receiving community in the mid-1960s with fishing as the main economic activity. Even here, where additional government funding targeted regional economic growth, stand abandoned properties. A single-storey grey bungalow sits at sea-level, sinking into overgrown greenery in a losing battle with the elements. Walking through most houses, April is reminded of the Tragically Hip’s “38 Years Old” lyric, “Same pattern on the table, same clock on the wall.”
“They all have the same margarine tub, the same salt beef buckets, the same starburst clocks on the wall,” says April, acknowledging this house was different. She was struck by its diamond-patterned curtains with their flash of orange, black and grey, and the set of moose antlers atop a burgundy sofa cushion on the rotting wood floor. She couldn’t make sense of the kitchen’s orientation, facing the road instead of the water. But then, as she sat in the living room, cautious of popping sofa springs, she spotted the view to the mouth of Torrent River. 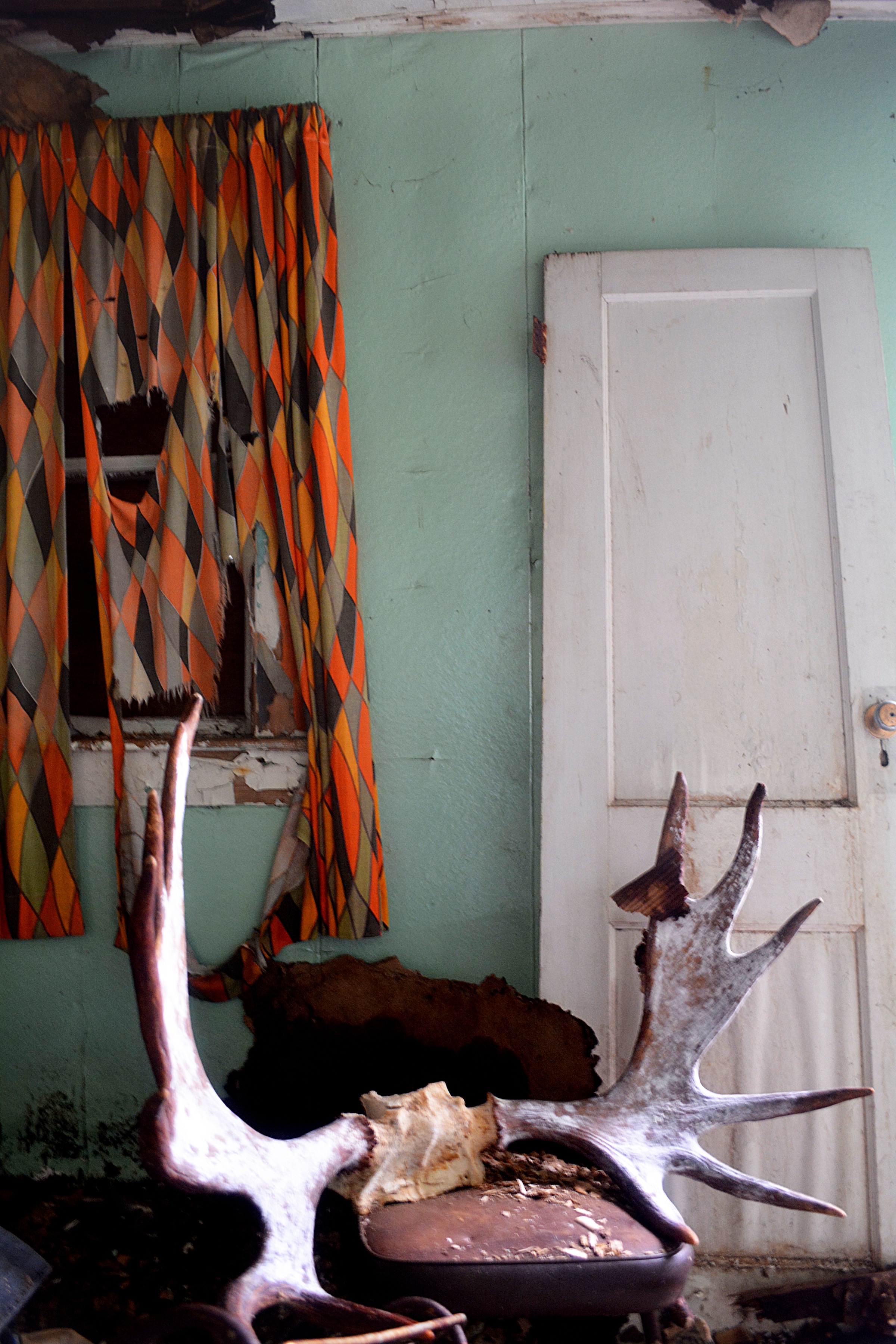 April’s work is crammed with the nostalgia of a rural life that continues to inspire artists and aesthetes alike. It creates a draw for tourists, too, says Webb, reminded of a recent trip to Fogo Island. 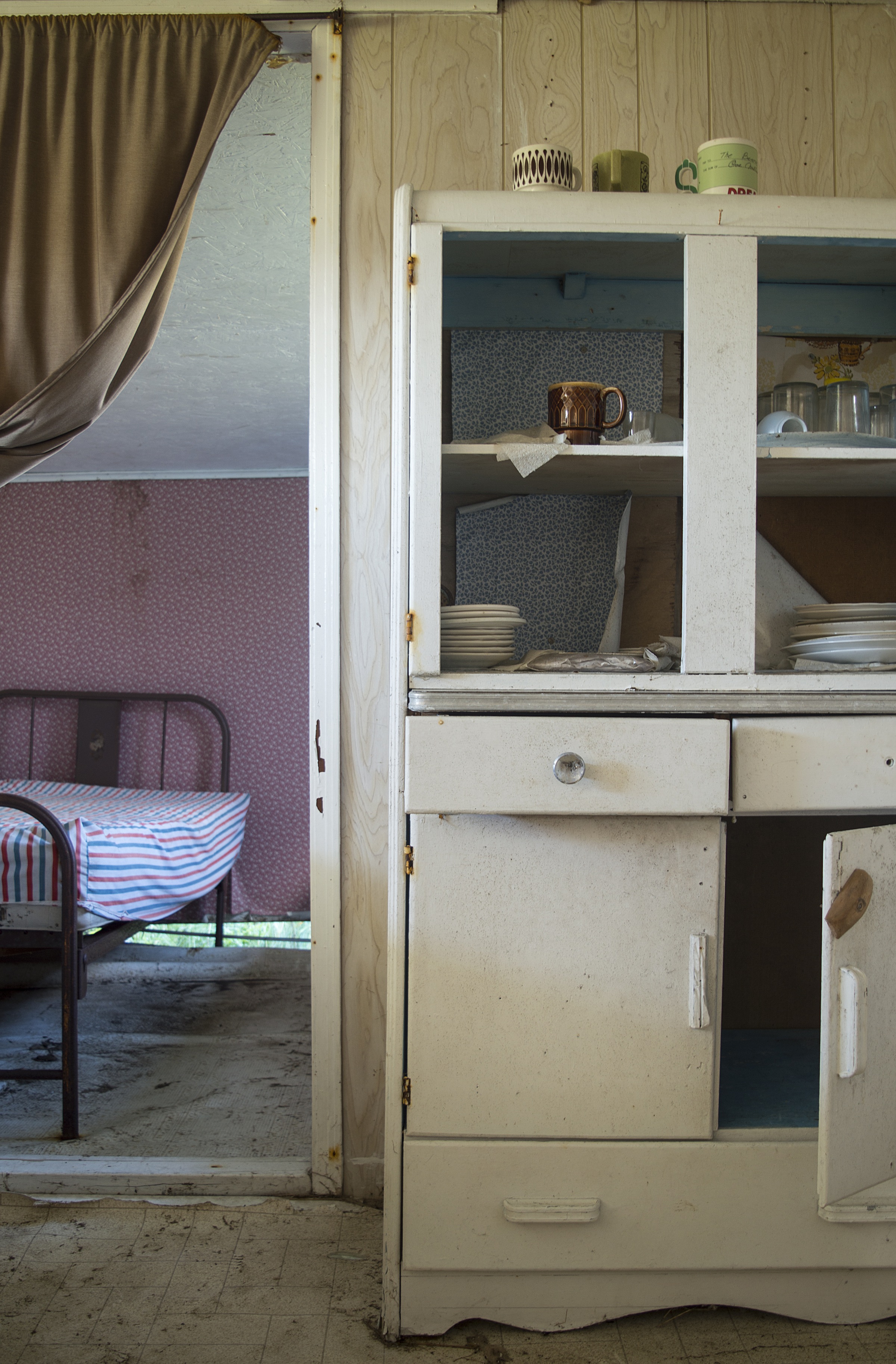 Just the same, while resettlement may seem unique to Newfoundland and Labrador, moving people from rural to urban areas has been going on for at least a couple of hundred years everywhere around the world. With recent relocation examples such as William’s Harbour (Labrador) and an offer on the table such as in Little Bay Islands, do we know if relocation yields savings for the province? A media contact for the provincial Department of Municipal Affairs and Environment, which is responsible for the province’s Community Relocation policy, shared that it takes 20 years to realize savings. The magnitude of those savings was not immediately available, but given relocation withdraws all municipal and provincial services from each relocated community, it is reasonable to assume costs are contained at the least.

For April, it’s not about the economics. This spring she’ll head out again, camera in hand. Fall and spring are her preferred timing, allowing a profile of two views: one when everything is dying or already dead; the other when things are coming back to life. Her photos may point to lives past, but there’s life in them just the same. - Story by Jenn Verma, all photos by April MacDonald