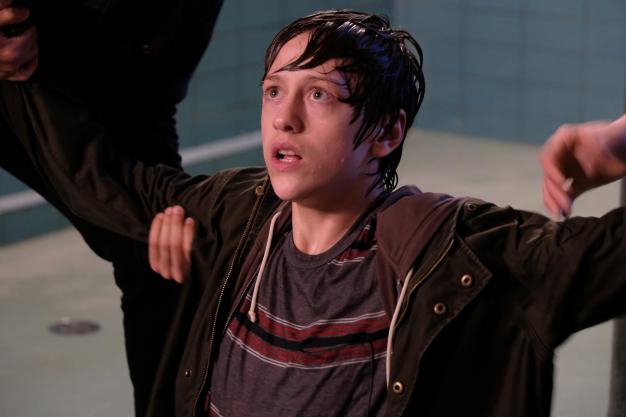 Percy Hynes White as Andy Strucker in The Gifted (All photos courtesy: © 2017 Fox and its related entities. All rights reserved. MARVEL TM & 2017 © MARVEL

Growing up, Percy Hynes White had an active imagination, "just making up stories and stuff, and acting them out at home," he says. "So when I got to do that for real, it was just cool." Percy has spun that penchant for pretending into a full-fledged acting career. While not yet old enough to toast his success with real champagne, he has an acting resume longer than some professionals twice his age. Already he’s earned two awards: best actor at the Atlantic Film Festival, and the Rising Star Award at the Edmonton International Film Festival, both for his role in the 2014 film, Cast No Shadow.

Newfoundland-born and transplanted to Toronto, 16-year-old Percy is currently in the United States filming his latest project, “The Gifted,” in Georgia. He is cast as high school student Andy Strucker, who finds out he and his sister are both mutants - people genetically endowed with superpowers. The new show is based on the Marvel comics’ X-Men series and began airing on the FOX cable network in October.

Downhome managed to catch up with Percy on a day off from work in mid-September. He has a pretty hectic schedule, especially as he has to balance schoolwork with his acting job. At the moment he’s doing all his courses online and freely admits that he doesn’t miss the classroom setting at all. “I have to do school, like tutoring, on set for three hours every day,” he says. That eats into the time he’s allowed to work per day, under the American labour laws for child actors. “So that really takes away my time, ’cause I only have 10 hours that I can be on set, and so seven hours to shoot, including lunch, is not a lot of time.”
And time is of the essence in television production. From casting to airing, this show has less than a 12-month turnaround. Percy says he first tried out for this part in pilot season last winter. That’s when new shows premiering in the fall are getting started so they can start filming in the summer.
“You know, I kind of forgot about this one because there was some other stuff that came along that seemed pretty cool and I was really focusing on that,” he recalls. “And then I got a call back for this and I was like, ‘Oh! That’s weird.’ And then I did another tape and then they flew me out to Los Angeles like a week later to do a meeting and a screen test.” Two days after the screen test he was told he’d landed the role.

When the first episode aired on October 2, they were still filming the last few episodes of the season. “It’s like a really fast turn-around part. That’s why I think I got the part a lot quicker than I usually would have, because they have to go fast,” he says.
Concerned about giving away potential spoilers, Percy was scant on details about his character and the show’s plot. “I don’t know what his power is either, it’s really unspecified,” he hedges. “…It’s just, like, I develop these powerful, telekinetic…abilities when I’m angry. I guess I kind of…destroy things in the
near vicinity.”
While he doesn’t own up to any real-life superpowers, his genes suggest that maybe something steered his career path towards success in the entertainment industry. He’s the son of filmmaker Sherry White and author/actor Joel Thomas Hynes (and the great-nephew of the late Ron Hynes). Coming from such a creative family has “allowed me to start my career because, you know, my parents are both writers and directors, and I started out having small roles in their films when I was a kid,” Percy says. “And when we moved to Toronto, I got an agent because I liked it so much.”
Acting is his thing right now, but Percy admits he already has his eye on a future career behind the camera: “I wanna graduate from acting, I guess, eventually and then become a director.”

For now, you can catch Percy’s work in front of the camera on “The Gifted,” which airs in Canada on Mondays on CTV at 10:30 p.m. NDT. - By Elizabeth Whitten