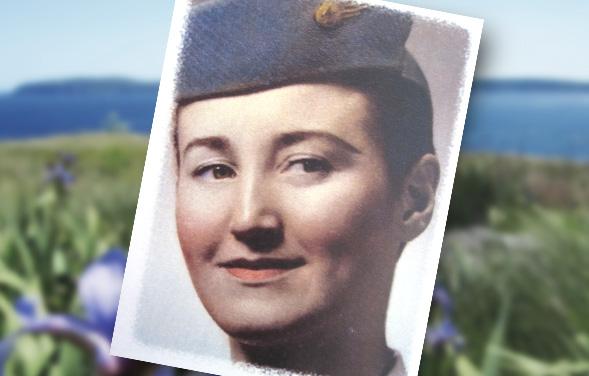 It's a warm, overcast morning near the end of July in Bay de Verde, a small fishing community on the northern tip of Newfoundland's Avalon Peninsula. At the cemetery near the town's entrance, a small group watches in silence as a priest sprinkles holy water onto the rectangular urn, draped in a black cloth, before him. Plumes of sea spray from a group of whales frolicking nearby rise into the air. Even they seem to be paying tribute. For now, a simple white cross marks the final resting place of a humble hero - Mary Dohey. The people bow their heads and pray. They have fulfilled their promise. They have brought Mary home.

Afterward, friends share stories, smiles, and a few tears, as they sit and reminisce at the recreation centre in the neighbouring village of Red Head Cove, where Mary spent her formative years.
For Mary, the road to Red Head Cove was a rocky one. But it’s those early challenges that helped form the strong woman she would become - the woman who would go on to save over a hundred lives, thousands of feet in the air, thanks to her sheer grit and nerves of steel.

High-Flying Dreams
The youngest of 14 children, Mary Imelda Dohey was born in the Cape Shore community of St. Bride’s on September 22, 1933. Times were tough and most families spent their waking hours doing what was necessary in order to survive. When Mary was just three years old, her mother died and her father made the heartbreaking decision to place his two youngest children, Mary and her brother Jack, in foster care.
The next six years for Mary were filled with hardship. Her foster mother would beat her and make her scrub floors and perform other household duties. The shy little girl went to school unwashed, barefoot and hungry, and had to pick berries and steal vegetables from local gardens to get enough to eat.
“The foster mother was not very good to her, and she used to say ‘You’ll be found in the gutter,’” says Nora O’Rourke, Mary’s niece (and Jack’s daughter). “It wasn’t exactly a good situation that she went into.”
Eventually, Mary was brought to Belvedere Orphanage in St. John’s where, at the age of 10, she was adopted by Michael (Mick) and Catherine (Kate) Rice of Red Head Cove. The couple had had seven children, but all but one had died. They cared for and loved Mary as their very own - and she loved them right back. They lived happily in a part of the community known locally as Round Cove. (Today, nothing but a few rock walls remain and the ocean chases the horizon beyond a lush, overgrown meadow filled with raspberries, wild roses and blue irises - an idyllic place for a child to grow up.)

After high school, Mary left Red Head Cove to teach for a year, to earn enough money for nursing school.
“She knew she wanted to be a nurse. From the time she was very young, that’s what she wanted to do,” says Nora, who, with bright eyes and a kind smile, bears a striking resemblance to her aunt. She describes a woman of unwavering faith who was modest, genuine, independent and compassionate to a fault.
While Mary successfully trained to become a psychiatric nurse, she also wanted to see the world and in her early 20s, she became an air stewardess with Trans-Canada Air Lines (now Air Canada). The requirements were tough - but so was she.
“She applied and she said she never ever thought she’d be accepted. Lo and behold, they said yes, they
wanted to do an interview. She had to go to Montreal for that. And the rest is history,” Nora says.
Through her work, Mary visited places she had only dreamed of as a child. At one point, she took a leave of absence from the airline and spent almost six months in Kathmandu to nurse, and train nurses, with the Dr. Tom Dooley Foundation.
“The conditions were pretty rough in Nepal. But she absolutely loved it,” Nora says. “She was very busy. When she wasn’t in the air, she was in a hospital somewhere.”

Terror Aboard Flight 812
On November 12, 1971, during a routine flight from Calgary to Toronto (what would come to be known as “the doomsday flight”), Mary’s dream job turned into a nightmare.
“I remember the night that all this went down. I was only 12. Dad got a call…I remember sitting at the top of the stairs and I knew there was something big going on. I came down and he was in a tizzy,” Nora recalls.
A hijacker, clad in a long trench coat and gloves, a black balaclava covering his face, had taken her aunt and 127 others hostage on a DC-8 jet mid-flight. The hijacker demanded $1.5 million and that the plane be diverted to Great Falls, Montana.
The man called Mary over and held a sawed-off shotgun to her head. At one point he forced her to hold, in one raised hand, the detonating wires attached to two bundles of dynamite.
Nora, in the retelling, lifts her left hand in front of her to demonstrate, holding an imaginary wire between her thumb and forefinger, and another between her ring finger and pinkie. But for her aunt, those wires were all too real. Mary held her hand in that position for four hours.

“She said she was afraid to put her hand down, afraid that the wires would touch. It was a 60-stick dynamite bomb that he had,” Nora says.

Not long after, Nora continues, the hijacker accidentally fired his shotgun just past Mary’s ear.
“I said, ‘What did you do?!’” she recalls asking her aunt incredulously. Mary said to the hijacker, “Oh, dear, you didn’t mean to do that.” To which he replied, “No, I didn’t.”
“She spoke to him very calmly,” Nora says.

Mary, noticing the man was nervous and shaking, trusted in her training in psychiatric nursing to soothe him. She introduced herself to the man (who told her his name was Dennis, which turned out to be an alias) and asked if she could hold his hand, continuing to speak to him in comforting tones.

The plane touched down in Montana, where a suitcase was delivered (containing only $50,000), and prepared to take off again. Through her conversation with the man, Mary learned that he had a soft spot for children, so she pretended that she had heard some aboard, crying.

“She said, ‘I didn’t know if there was one kid or 20 kids on the plane,’” Nora recalls Mary telling her. “But she said to him, ‘Dennis, do you hear the children?...They’re scared, they’re hungry.’”

That was all the convincing “Dennis” needed to let the passengers go. He told Mary that she could leave, too, but she refused for the sake of the lives of the remaining crew. The plane took off again and some time later, when the hijacker laid down his gun to open a window to parachute out of the plane, the crew jumped him, bringing the terrifying eight-hour ordeal to an end - with no lives lost.

A Humble Homecoming
On December 1, 1975, Mary became the first living person to receive the Cross of Valour, the highest of Can-ada’s three Bravery Decorations, which “recognizes acts of the most conspicuous courage in circumstances of extreme peril.” At the recreation centre in Red Head Cove, the medal has been put on display for the afternoon, flanked by pictures of significant moments from Mary’s life, including meeting then prime minister Pierre Trudeau and Queen Elizabeth II. An unassuming woman by nature, Mary never displayed the award at home.

“She didn’t want any recognition… she very much wanted to just blend into the background,” Nora says.
Mary, who never married or had children, continued travelling the world long after her retirement from the airline in 1991. Every year, to celebrate Mary’s birthday, Nora says, they would go on a big trip, to places like Australia and Machu Picchu in Peru. They spent Mary’s 82nd birthday on the Great Wall of China.
On June 12, at the age of 83, Mary died in Mississauga, where she had lived for the past 50 years. Mary had made it clear to Nora, and to her childhood friend Rose Quinlan (her nextdoor neighbour in Red Head Cove), where she wanted to be laid to rest - the place where she knew true happiness as a child.
“She said, ‘Now Rose, I know you’re going to take me home and bury me,’” Rose recalls. (The coincidence of Mary’s interment taking place less than two weeks before Red Head Cove’s very first Come Home Year celebrations is not lost on her.) The two had remained the best of friends over the years, exchanging birthday and Christmas cards. “We were like sisters. We talked about everything on the phone,” she adds.
Mary’s Cross of Valour will be eventually donated to The Rooms in St. John’s, where Nora hopes more people will learn about her aunt’s incredible story.
“Even though she never initiated the conversation [about the hijacking]…she was very proud of what she did and very proud, not only of what she did with the hijacking, she was very proud of what she did with her life. To have come from such humble beginnings and have such a rough start in life, with losing my grandmother and to be told in the initial years of when she was in foster care that she would never amount to anything…she said many, many times during her life that’s what propelled her on,” Nora says.
“I think the thing that she really would want people to know is that it doesn’t matter where you came from, it doesn’t matter how rough your start was…you’re in control of yourself and you’re in control of your life. If you want to work hard, you can make anything of your life. That’s what she wanted to do, she wanted to make something of herself.”
And so she did. - By Linda Browne

Click here to watch Mary Dohey tell her story in her own words in a TV segment from the late 1980s.

Beautiful story. I remember when this happened. We were all so proud of Mary and the role she played in the hijacking. Rest in peace.