Gerard Smith examines a bee-laden frame at his apiary in Freshwater.

The hot summer sun is beating down on me where I stand dressed in white and wearing a veil, a bonnet and elbow-length gloves and holding an ornate metal object as tiny tendrils of smoke waft like incense across the scene.

Trust me. It is definitely not what you think.

Although…I did say "I do" to a proposal of sorts. After learning I was interested in backyard beekeeping, Gerard Smith invited me out to his place, G&M Family Farm in Freshwater (Placentia), NL, for a tour and to lend him a hand. He has around 4.5 million bees on his property - 80 hives with about 60,000 bees in each. His company offers all the supplies, equipment and some instruction on how to start your own honeybee operation.
So here I am, fully fitted out in beekeepers’ protective gear, helping Gerard do a controlled split of a colony to a new location. I also get to mark a queen bee with an internationally recognized identification symbol so her age can be determined at a glance and she can be easily spotted in the hive (for 2017, the symbol is a single yellow dot on the thorax). I learn how to correctly handle the bee-laden frames during hive inspection and operate the small stainless-steel smoker when needed (Gerard suggests burning local grass or plants, which are natural and non-toxic, in the smoker to protect the bees).
I’m surprised to learn that the type of flowers where the bees travel significantly influences the flavour of their honey, and I get to taste samples so fresh and delicious during the day that I have to stop at the shop on the way out to buy several jars to bring home.

Bell Island Beekeeping
What led me to that amazing experience in Freshwater was actually a chance encounter on Bell Island last spring, where I met Rod Bickford (pictured below). He gave me a tour of his farm and talked enthusiastically about his relatively new beekeeping hobby.
“When I first established the nucleus colony last summer [2016], there were likely about 5,000 or so bees in there. That quickly grew and by September there were likely three times that many. This year the hive has expanded even more and there are maybe 30-50 thousand bees in residence,” Rod says, adding, “I can only estimate, of course, based upon the number of bees that I observe per frame in the hive.”
A nucleus colony is essentially a small honeybee colony created from a larger one. The nucleus of a colony, of course, is the queen bee. For anyone starting their first honeybee operation, one nucleus colony in Newfoundland and Labrador cost about $285 in 2016. 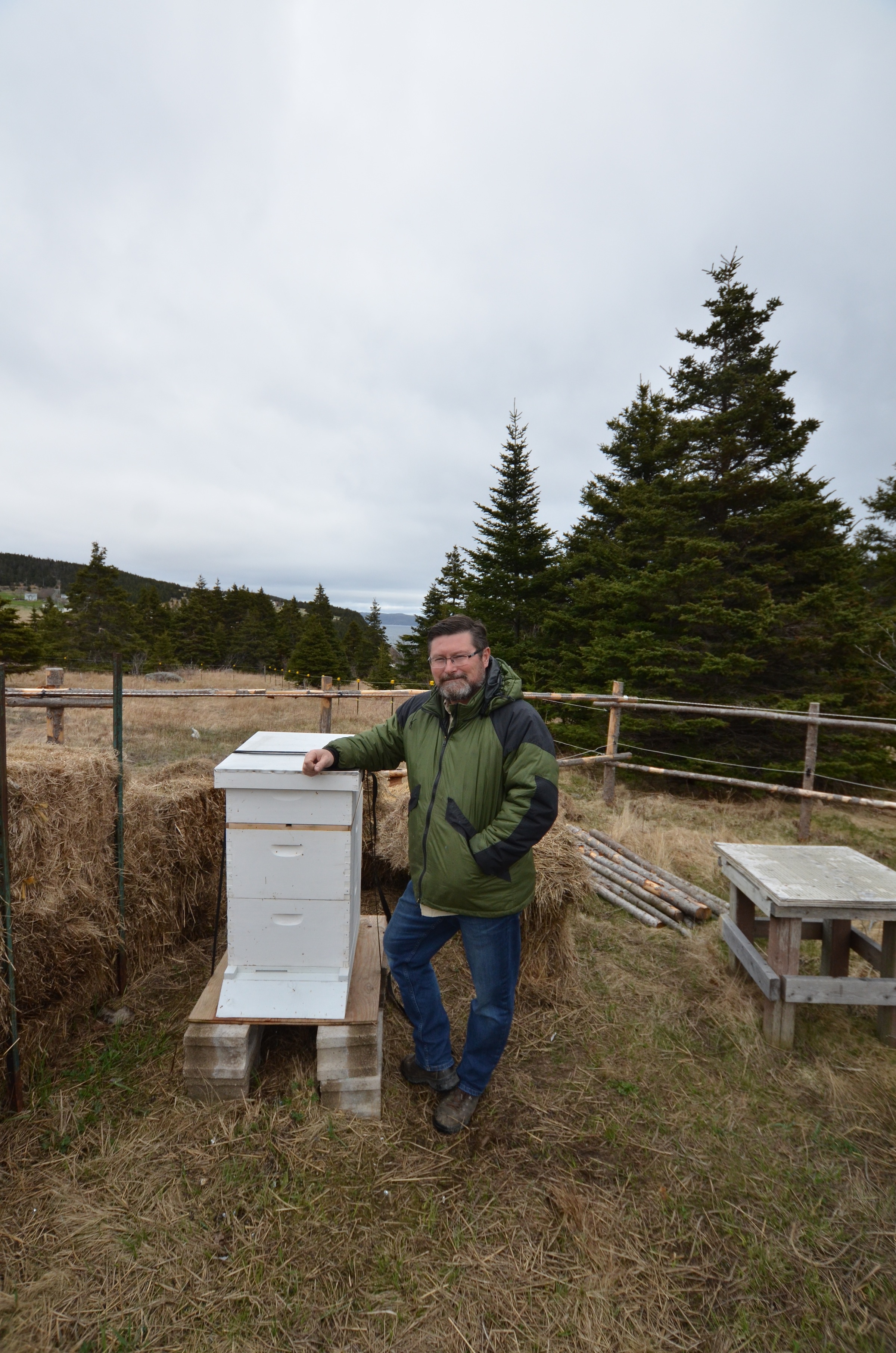 As far as Rod knows, he’s the only beekeeper on Bell Island. Registering with the government for setup was relatively easy, he says. “It was just a form that is sent in to the provincial fruit crop development officer and provincial apiarist at the Department of Fisheries and Land Resources every year. You need to let them know where exactly the apiary is, how many hives are there and what the purpose [commercial, hobby etc.] is.”

His family has deep roots in the area going back generations, and his love of the land is evident. “Lance Cove is a great spot for the bees. The abundance of wild flowers, trees, shrubs and other food sources is amazing. I have had neighbours ask what type of flowers they should plant to help the bees and some have even held off trying to get rid of dandelion as the bees love it!” he says. “There is a bit of a micro climate in Lance Cove and a sheltered southerly exposure that creates the perfect environment all year long.” Rod’s bees don’t need to travel very far since there are lots of nearby forage opportunities, and generally bees keep to a three-kilometre range.
In the fall of 2016, Rod says, “There was maybe 30-40 pounds of honey in the hive. Of course, none of it was harvested as it was needed to get the new hive through the winter. Now that the hive is well established and healthy, I do expect to take maybe 25 or so pounds off this year, depending on the final production levels. I won’t really know until late summer.” He adds, with a smile, “I may take less honey than that, but it all depends on the bees. I want to ensure I leave sufficient supplies to get them through our long winter and if that leaves me with less, then so ‘bee’ it.”
That response is a good reflection of Rod’s easy-going demeanour, something he partially credits for not being stung so far by any of his thousands of bees. Beekeeping doesn’t stress him out; in fact, it does the opposite. “As someone who spent the better part of a 30-year professional military career being trained in the art of war and effectively ‘managing violence,’ keeping bees has become like therapy for me,” Rod explains. “Same reason I loved keeping and fostering Newfoundland ponies and spending time in my garden and greenhouse. I’ve been up close and personal far too many times with the evil side of humanity and witnessed the destruction society can wreak upon itself and the environment. Maybe, in a small way, keeping a few bees is my way of apologizing to Mother Nature and healing a few wounds, both literally and figuratively. “
He adds with a grin, “It’s also about providing a positive example and demonstrating that new people, ideas and experiences, when meshed with such a historical location, can actually enrich a place; they don’t have to be feared.”

NL's Queen Bee
Backyard beekeeping has really taken off in the last four years, says Catherine Dempsey. president of the Newfoundland and Labrador Beekeeping Association (NLBKA), who jokingly calls herself the “Queen Bee.”
“Most of the members start out interested in having a couple of hives and getting some honey for themselves, but there are presently six apiaries that are larger scale and commercial,” she says.
Newfoundland bees are a special species that need to be protected from outside influences. “The island of Newfoundland is one of the few places in the world that has no Varroa destructor mite, tracheal mite, small hive beetle or wax moths. These pests are hugely destructive to hives and bees, and can also carry and pass on other diseases that affect honeybee health.” Currently, local beekeepers don’t have to test for these pests, or medicate their hives. “However, this status could be irreversibly ruined if someone snuck bees or used equipment into the province. The Department of Fisheries and Land Resources, and Newfoundland and Labrador Beekeeping Association are very concerned about this happening and are working to prevent it.”
Catherine also notes that one of the greatest challenges to beekeeping in Newfoundland and Labrador is the weather. Our late springs, and wind, rain, drizzle and fog all mean that our bees have to produce enough honey and grow their hive populations to a size that can survive the long winter in about 12 weeks rather than the 18 weeks other provinces have. Beginners can expect to lose some hives over their first couple of winters. Location of the hive could be a factor. Sheltered, away from the ocean, and in Central and Western Newfoundland where the climate is warmer, is the bees’ best bet. - By Dennis Flynn

Maine Beekeepers - find information on marking a queen bee and the meaning of the code colours.