Moose of a Different Colour 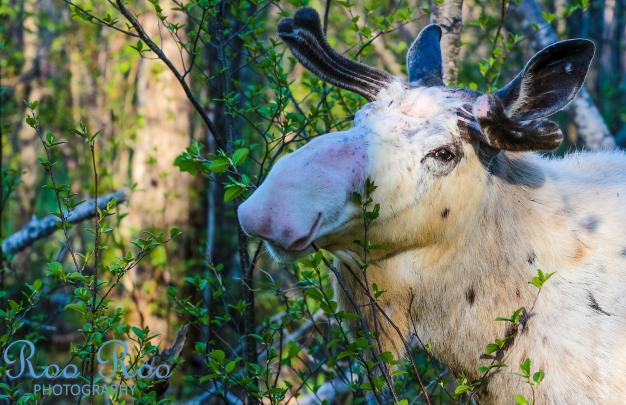 It was a Saturday evening in May when Crystal Anderson-Baggs was pulling into Dhoon Lodge, in Black Duck Siding in western Newfoundland, for a weekend of camping and a neighbour called out: "Do you have your camera? The moose is just down here!"

Acting quickly, Crystal grabbed her camera and, after turning a corner, spotted the rare creature: an almost all-white moose with dark spots. Her young son called the animal a “ghost moose,” she says.
Known as a piebald moose, this fella had been seen at the campground a few times in the last year, but Crystal hadn’t caught a glimpse of him until now. He was taking his time, walking through the campsite, she recalls. “I did not want to get in his way, I didn’t want to be intrusive. He was just there. I wanted to take a few shots because I thought it was a very rare occurrence. I had never been that close to a moose before,” says Crystal. “So it was a very cool experience.” 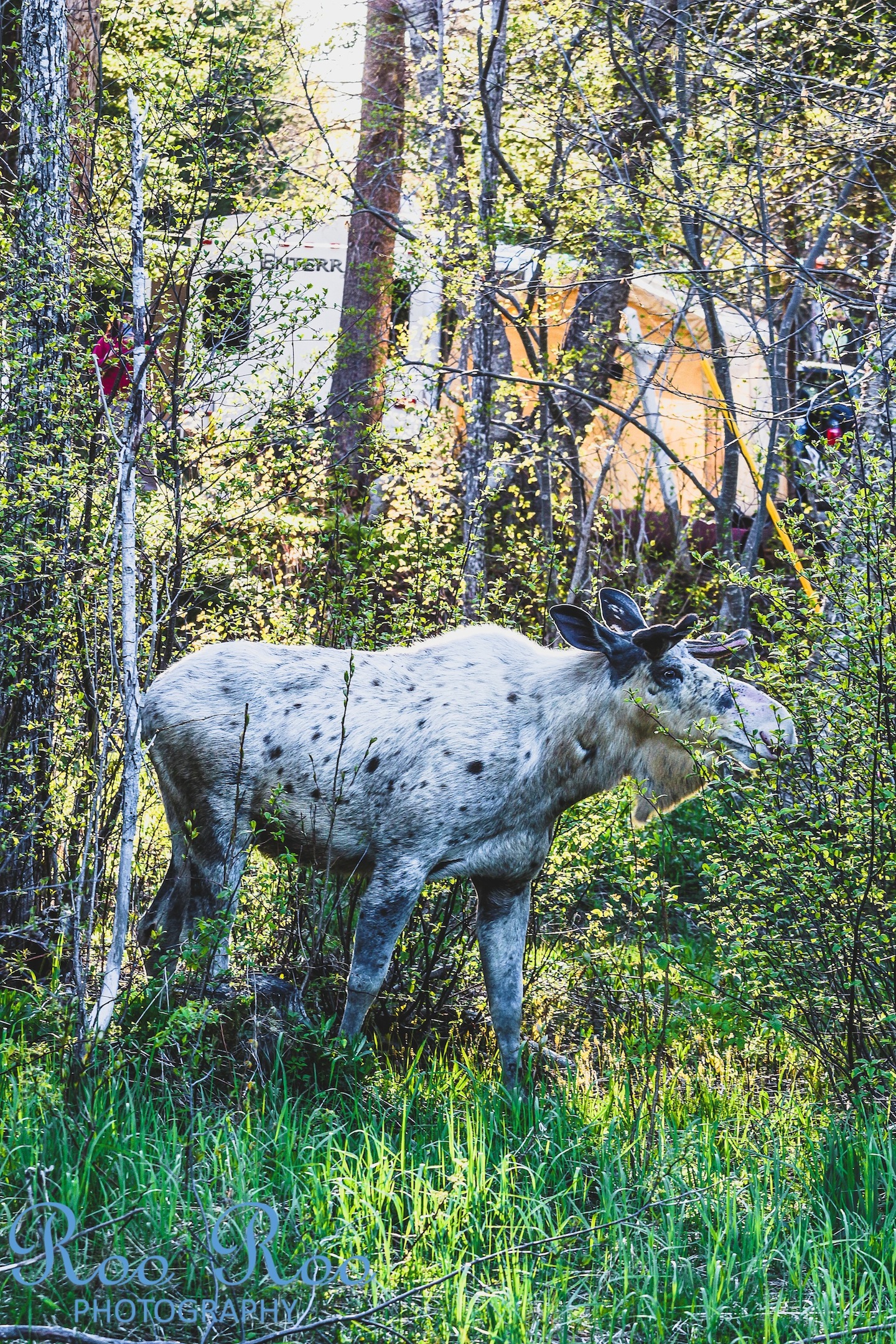 At one point Crystal had to stop snapping photos when her camera’s battery died. While she recharged, the moose ambled across the campground and eventually left her sight.

Once her camera was ready to shoot again, Crystal says she managed to catch up with the creature and take some of her favourite shots. She estimates the moose hung around the campground for about five hours, during which time she was able to take more than 80 pictures. “He’s very interesting in all his spots and just his markings,” she says.

But she was still cautious and says she didn’t let her enthusiasm get the better of her.
“He is a wild animal, so we did give him his space and let him go wherever he wanted,” she says, adding the other campers also gave the moose his freedom. “Everyone was just being really respectful and just
wanted the opportunity to see him. And nobody was harassing him or kind of getting in his way,” she says. People wanted to be able to say they saw him, she says. 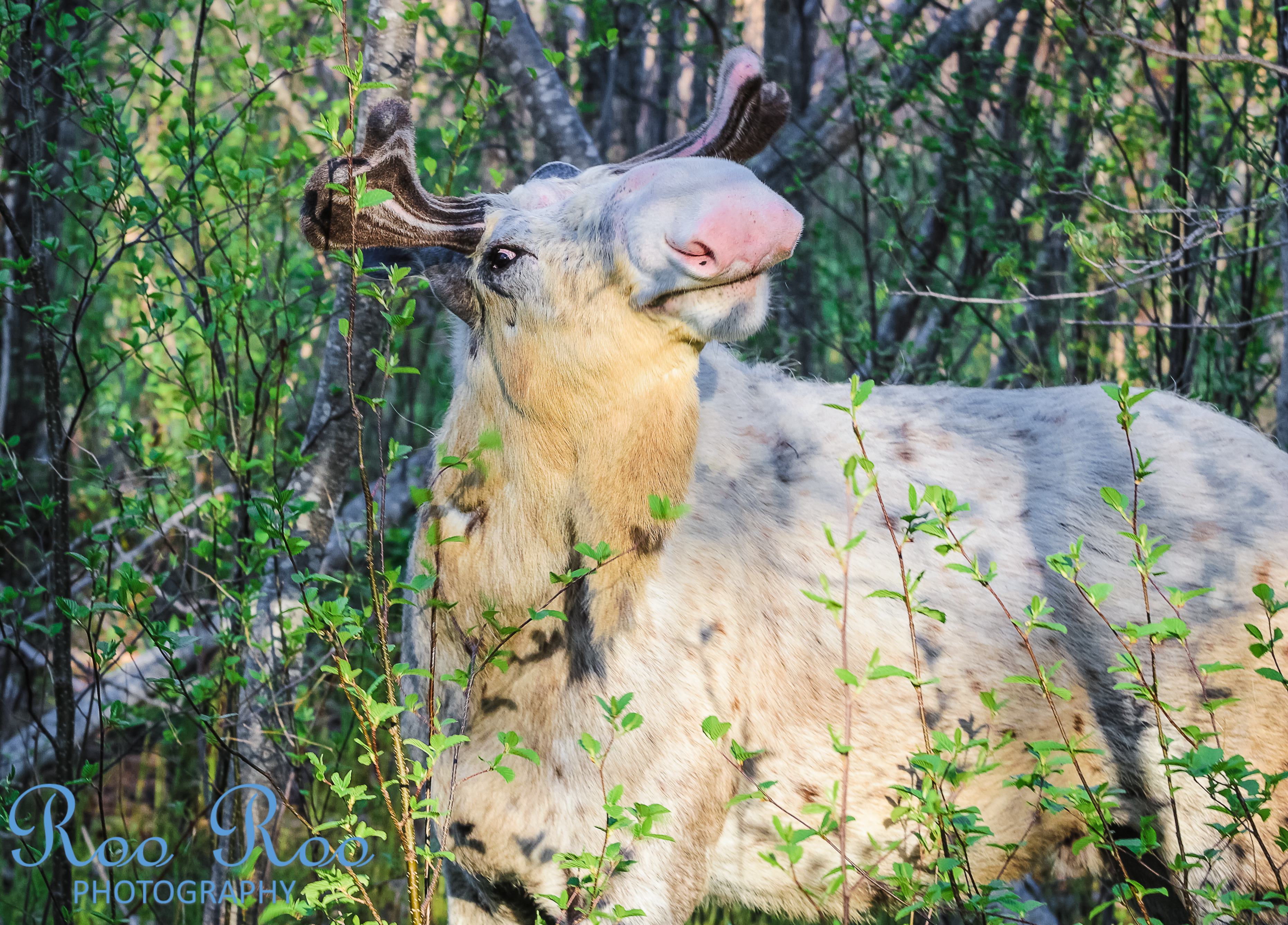 Crystal’s hobby is photography, though she usually sticks with people and portraits as her subject matter, not nature. She almost completely missed out on taking these stunning photos because she doesn’t normally bring her camera when she’s camping. “It’s kind of funny how it happened,” she explains.

When Crystal initially arrived at the campsite the day before, there was a beautiful sunset. Her first instinct was to immortalize it - but as usual she hadn’t brought her camera. “I was so mad, as a lover of photography, to not be able to get a good shot of this beautiful sunset,” she says. So the next day, after a photo shoot in Corner Brook, she decided to take her camera when she returned to the campground - in case she got another chance at taking that sunset photo. “And I got something a little bit better than the sunset!” she chuckles at the memory. “I had a one-on-one photo shoot with a piebald moose.” 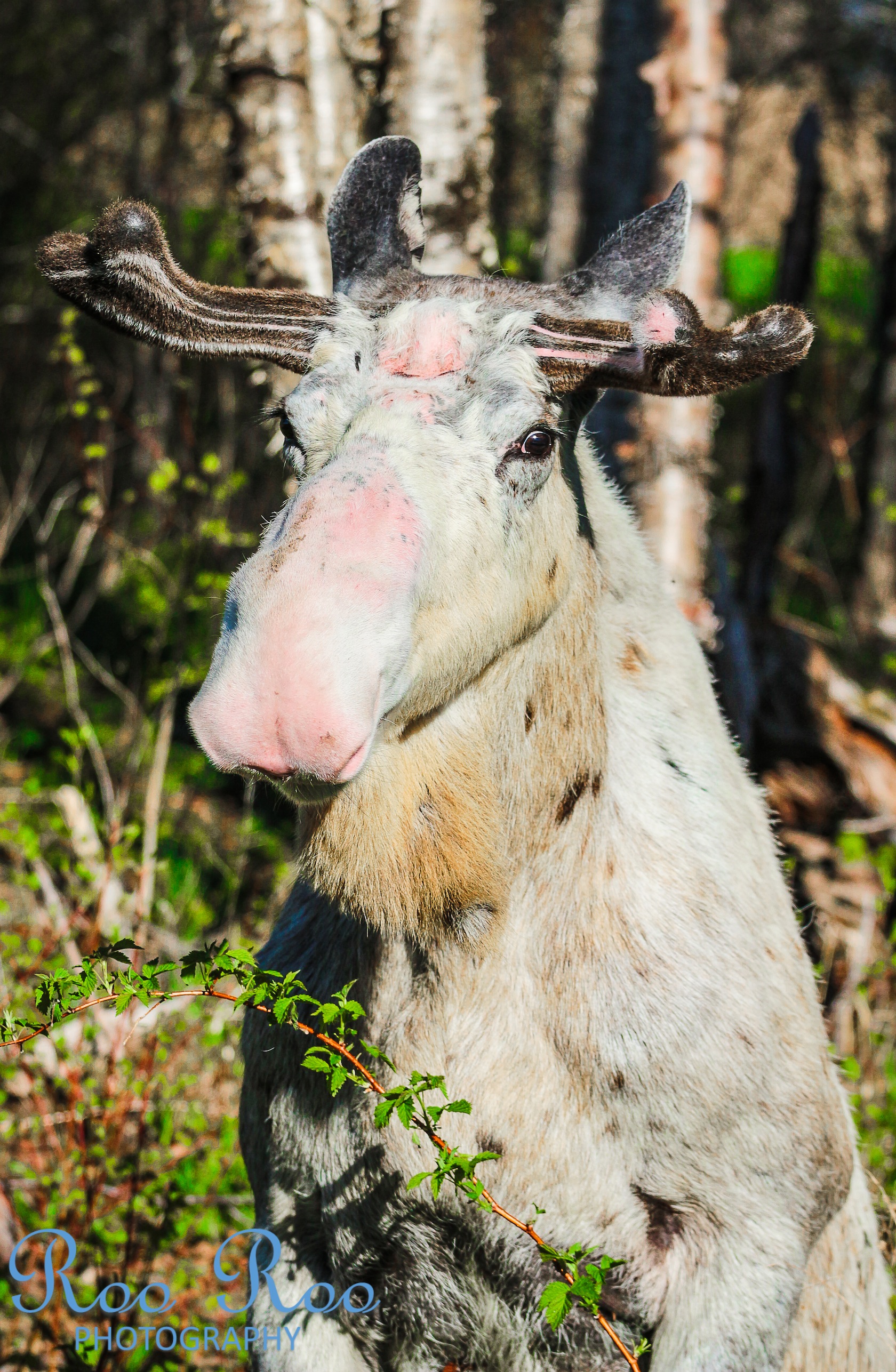 What’s a Piebald Moose?
When Downhome learned of Crystal’s encounter and saw her photos, we turned to our resident wildlife expert, Todd Hollett, to shed some light on this unusual creature.
The piebald moose is distinct, with its white fur and spotted black, brown or off-yellow pattern, he explains. Sometimes the skin is also spotted.
“Piebald colouration in moose (and all other animals) is related to a genetic condition known as leucism. Leucism causes that partial loss of pigmentation in an animal that causes the skin and hair to be white, pale or patchy,” Todd explains.
While there’s no official tally of how many piebald moose exist in the province, he believes there are probably more than two about. “These characteristics are extremely rare and are not usually hereditary; however, there may be a localized genetic influence on moose in a localized area that produces these types of conditions in offspring,” he notes.
There have been several piebald moose sightings this year, but Todd notes that they tend to show up more commonly in the Port au Port Peninsula/Stephenville area - slightly west of where Crystal “got” her moose. And they’d be wise to stay put; Port au Port is part of Moose Management Area 43, where wildlife legislation prohibits killing predominantly white moose. - By Elizabeth Whitten